Following news last week that the Irish Government is considering scrapping its EUR10 travel tax, the government this week announced plans to reduce the tax to EUR3 per departing passenger as part of its 2011 Budget. The temporary reduction will be effective 01-Mar-2011 and will be reviewed again next year.

In contrast to the EUR80 million Minister for Tourism, Mary Hanafin, stated the tax would raise for 2010 last week, Minister for Finance Brian Lenihan stated the tax is expected to raise EUR105 million for the year. Mr Lenihan also defended the tax, stating the UK, France, Australia, New Zealand and the US have similar taxes in place, while Austria and Germany plan to apply their own travel taxes in Jan-2011.

In announcing the reduction, Mr Lenihan stated the tax is likely to be increased again in the next review, unless the reduction provides an appropriate response from airlines. The minister added he hoped airlines would not respond to the tax reduction by increasing fares and charges.

Irish carriers Ryanair, Aer Lingus and CityJet have all expressed their opposition to the tax. The carriers last year released details of a report commissioned by the carriers from Amsterdam Aviation Economics. The report stated that the EUR10 tourism tax has resulted in revenue losses of EUR482 million, up to 3000 lost jobs and 1.2 million fewer departing passengers, while generating just EUR116 million in tax revenue in its first year. The report found that the Irish airlines have absorbed most of the tax and have been forced to reduce capacity and move aircraft to bases outside Ireland as a direct result of the imposition of the tax.

In conjunction with the reduction in the travel tax, Dublin Airport Authority (DAA) announced plans to launch an incentive scheme to encourage traffic at Dublin, Shannon and Cork airports in 2011. The Grow Incentive Scheme will mean the airports will effectively waive all airport charges for passenger traffic once an overall threshold of 23.5 million passengers is reached during 2011. Once the passenger target of 23.5 million for the three airports is surpassed, the DAA will subsequently rebate the airport charges for all of the additional passenger traffic to its airline customers.

The threshold of 23.5 million passengers for next year is equivalent to the throughput expected across the three airports this year, normalised for the exceptional impact of the volcanic ash crisis. Rebates will be based on each airline's proportion of the total traffic across Dublin, Cork and Shannon airports during 2011. Rebates will be paid to airlines in early 2012 for all passengers over and above the 23.5 million threshold.

DAA Director of Strategy Vincent Harrison stated the authority estimates an increase of 1 million passengers above the threshold would provide airlines with around EUR10 million in waived airport charges. He added the “combination of the government's decision to reduce its aviation tax, coupled with the DAA's rebate of all airport charges for extra traffic delivered to our airports next year provides a powerful incentive to stimulate passenger traffic into and out of Ireland during 2011”.

Earlier this year, the DAA also introduced financial supports to stimulate the launch of new short-haul and long-haul routes from the airports. Under these support schemes, airlines receive discounts for three or five years after the launch of a new route, including a 100% discount on all airport charges for the first year of operation.

Ireland's Minister for Transport Noel Dempsey welcomed the plans and is hopeful that capacity will now be re-instated by airlines, particularly on our key strategic routes, for the benefit of tourism, trade and economic development generally.

Ryanair has long called for the scrapping of the tax and a reduction in airport charges in the country and condemned the government’s decision to now reduce the tax rather than abolishing it completely. The LCC criticised the government for refusing to develop a tourism policy in the latest budget, warning Irish tourism “will continue to be strangled by a EUR3 tourist tax and the high and increasing charges levied by the Government-owned DAA airport monopoly”. According to the carrier, the EUR3 tax will raise revenues of less than EUR35 million p/a.

Ryanair also stated the reduction in the tax was a decision made by the European Commission (EC) that Ireland is merely complying with. The EC last week launched proceedings against Ireland over use of two air travel tax rates for passengers flying within the EU. As well as EUR10 travel tax, a lower rate of EUR2 applies for departures from Irish airports where the destination is 300km or less from Dublin Airport. The lower tax is contrary to EU law, which requires that the same tax rate should be applied to all intra-EU journeys regardless of length. The commission has reportedly stated the lower tax provides Irish passengers with favourable treatment.

Ryanair also responded to Mr Lenihan’s statement that a number of other countries have similar taxes in place, stating Dutch, Belgian and Spanish governments have all abandoned similar taxes, with traffic recovering in the countries as a result.

Completing its argument, Ryanair stated that although the government is reducing the travel tax, the reduction will only be offset by the Dublin Airport Authority’s (DAA) plans to raise airport charges by EUR3 per departing passenger from Jan-2011. According to CEO Michael O’Leary, the DAA will increase airport fees by over EUR11 per departing passenger over 2010 and 2011. Ryanair stated this increase will offset the tax cut and thus will not do anything to reverse the decline in Irish air traffic and tourism.

In Sep-2010, Mr O’Leary briefed shareholders on Ryanair’s Irish tourism recovery plan, which he believes will reverse the record traffic declines at the main Irish airports over the past two years. Ryanair has submitted proposals to restore Ireland’s competitiveness as a low-cost tourist destination, which include:

The CEO stated: “Irish tourism and the Irish economy can be rescued, but only if there is a return to low cost access and a break up of the high cost DAA monopoly by allowing competition to succeed where the DAA has failed.”

In return, Ryanair has offered to massively increase its traffic at Dublin, Cork and Shannon airports by delivering 6 million additional annual passengers over five years. However, he is yet to provide such an offer to the Tourism Ministry.

Traffic numbers have certainly been declining over the past two years. Tourism Ireland has forecast there will be an 11.6% year-on-year decline in international tourist arrivals to Ireland this year, to 6.8 million. CEO Niall Gibbons stated 2010 has been one of the most difficult years on record for the country’s tourism industry. Recent data shows 858,600 fewer tourists visited the country in the first nine months of 2010.

Cork, Dublin and Shannon airports all reported declines in passenger numbers in 2009, following the global financial downturn. It should be noted that Shannon Airport has witnessed huge declines due to extraordinary circumstances affecting traffic, including war, social and political unrest, major sports events and new routes. 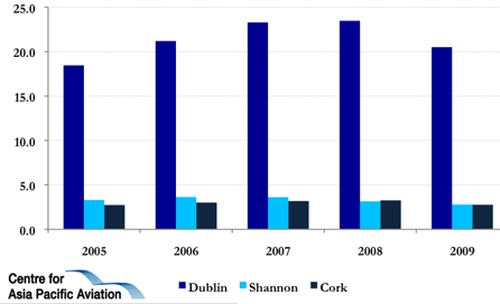 Passenger numbers growth at Cork, Dublin and Shannon airports have remained in negative territory over the past 12 months, according to ACI. However, the decline in growth at Cork and Dublin airports has reduced since the closure of European airspace in Apr-2010 due to volcanic ash. Shannon Airport passenger number growth has also made some recovery since Apr-2010, but is still below figures from the year before. 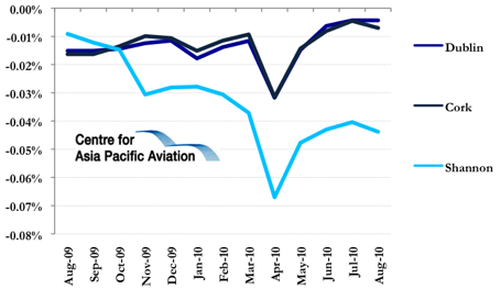 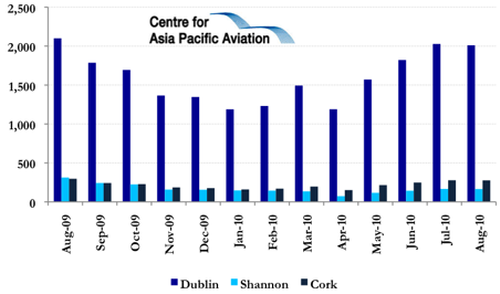 Ryanair reported a 14% rise in passenger numbers for Oct-2010 to 7 million. Load factor for the month was stable, at 85%. 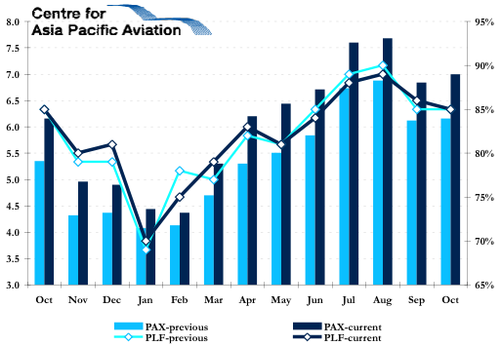 In response to the tourist tax and airport charges, Ryanair has reduced capacity at Dublin and Shannon airports and completely suspended operations from Belfast City Airport. Director of New Route Development Ken O’Toole recently stated the LCC will continue to respond to tax increases and any unwelcome regimes by shifting aircraft and bases "to where the conditions support the generation of a commercial return".

Mr O’Toole added the process of withdrawing capacity at Dublin will continue "in response to government mismanagement of aviation, the introduction of an aviation tax at the height of the crisis, the continuing increase of airport costs". The executive noted that “the most worrying thing from an Irish perspective is that outbound flows remain pretty solid, it is the inbound flows that have collapsed, and with the island nation depending on air travel for leisure, this is not a good situation to be in”.

Aer Lingus has also been critical of the travel tax, as it believes “it has a significant negative impact on demand for air travel into and out of Ireland”. CEO Christoph Mueller stated earlier this year that the tourist tax and high airport charges were ‘‘strangling’’ the economy. According the the CEO, the high ancillary costs were a ‘‘really hard hitter’’ to Aer Lingus’ business and described them as a ‘‘disadvantage to being based in Dublin’’.

Airport charges have also been a concern for the carrier, with CFO Andrew McParland stating that more than a third of cost cuts achieved from its current restructuring programme will be lost by an expected EUR35 million rise in airport charges, especially those at London Heathrow and Dublin airports, which account for more than half of Aer Lingus’ operations. Unlike Ryanair, the carrier stated that although it “ultimately opposed” the increased charges, it has no plans to relocate.

Government needs to address charges before traffic can recover

While the reduction in the travel tax may, in combination with the DAA’s new traffic incentives, may stimulate growth in Ireland’s air traffic, airport charges in the country are on the rise. As noted by Ryanair, the DAA still plans to increase airport charges at the start of 2011, in a move that will only offset the decline in the travel tax for airlines. As a result, airlines may continue to avoid increasing frequencies or launching new routes to/from the country.