The return of US sanctions against Iran in Aug-2018 is having a significant impact on the Iran-Western Europe aviation market.

British Airways will suspend its London Heathrow-Tehran service from 23-Sep-2018, leaving Iran Air as the sole operator on the route. BA has said that the route is no longer commercially viable, due to a fall in the number of business travellers.

KLM is to cease operating Amsterdam-Tehran from 24-Sep-2018, blaming the route's negative results and financial outlook. Iran Air will also be the only airline on this route. From the same date, Air France's Joon-branded service from Paris CDG to Tehran will also be suspended, leaving the route to Mahan Air and Iran Air.

Austrian Airlines will suspend its triangular Vienna-Shiraz-Isfahan-Vienna service in late Sep-2018, although it will maintain its Tehran operation. In addition, Aegean Airlines will discontinue its service to Tehran from Athens (included in Eastern/Central Europe) from 11-Oct-2018, leaving no other operator.

Moreover, Iran Air and Mahan Air are reducing capacity to Western Europe and Qeshm Air is exiting this market entirely.

After strong growth in 2016 and 2017 (following the removal of sanctions), Iran-Western Europe seat capacity is set to fall by 30% this winter.

The Jul-2015 signing of the Joint Comprehensive Plan of Action by Iran, the five permanent members of the UN Security Council plus Germany, and the EU led to a significant increase in airline capacity to/from Iran.

The return of sanctions already appears to be reversing this growth. Capacity data for 2018 indicate a 5.8% fall in international seat numbers this year, with year-on-year reductions from mid Sep-2018 onwards.

In Aug-2018 the European Union enacted a so-called Blocking Statute to counter the impact of US sanctions on European companies. However, its effectiveness is thought to be questionable. 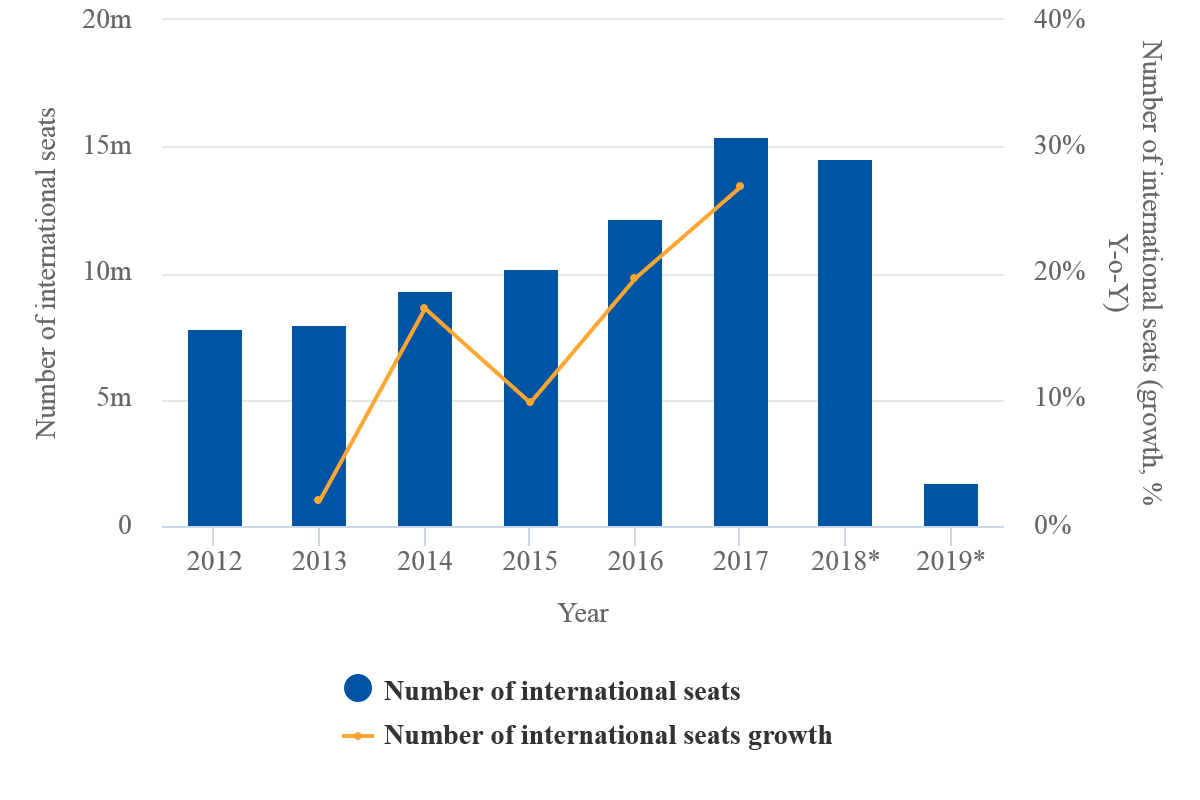 *The values for this year are at least partly predictive up to 6 months from 10-Sep-2018 and may be subject to change. Figures for 2019 are for the first two months only.
Source: CAPA - Centre for Aviation, OAG.

According to data from OAG for the week of 10-Sep-2018, Western Europe is only the third largest aviation region from Iran, with a share of 11.4% of international seats from the country.

However, it is significant as the only Western region with direct links to Iran. 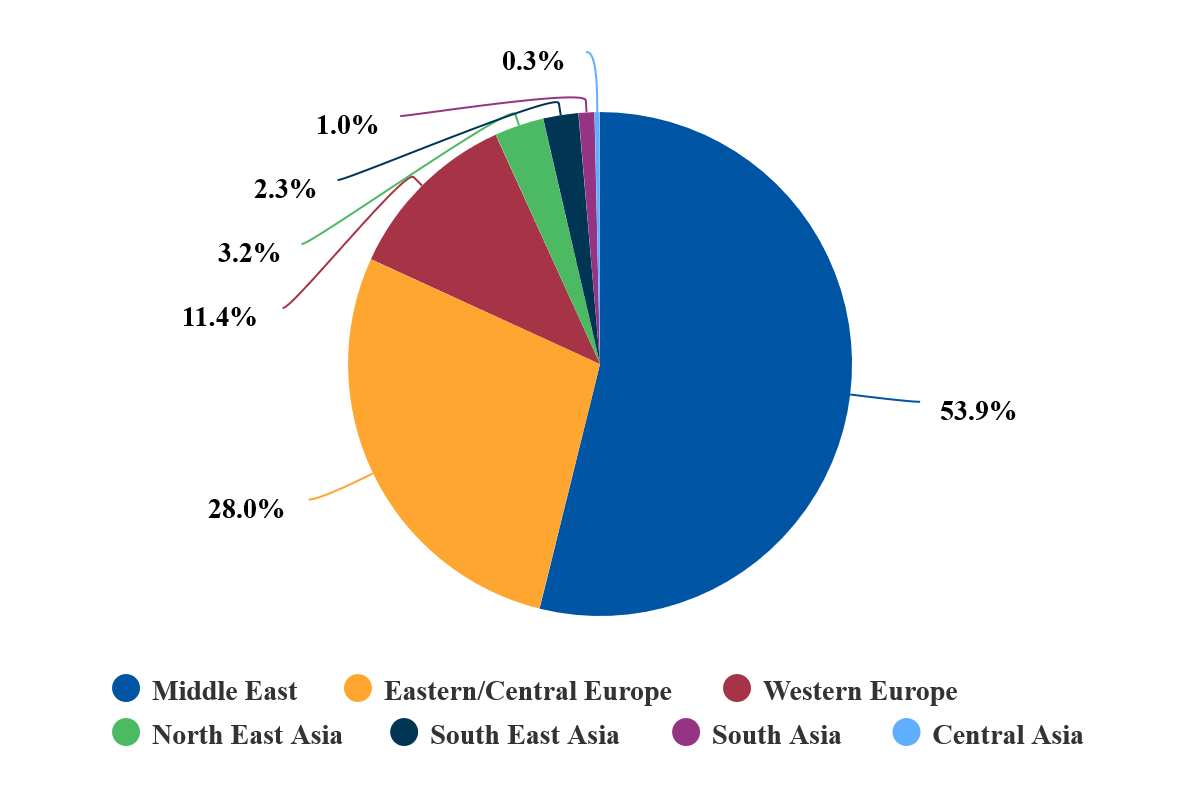 According to data from OAG, Iran-Western Europe seat capacity will fall by 37% from the summer peak week of 2-Jul-2018 to the early winter season week of 5-Nov-2018.

Although a seasonal reduction in capacity is normal between summer and winter, this compares with a fall of only 12% between the equivalent weeks of Jul-2017 and Nov-2017. There had been strong growth in Iran-Western Europe capacity through 2016 and the summer of 2017, with almost no seasonal pattern.

Weekly seat capacity between Iran and Western Europe: Jul and Nov 2018 vs 2017

The withdrawal of British Airways, KLM and Air France/Joon will have a big impact on Iran-Western Europe capacity this winter.

Together, these three airlines accounted for approximately 5,700 seats in this market in the week of 6-Nov-2017, or 16% of the total. 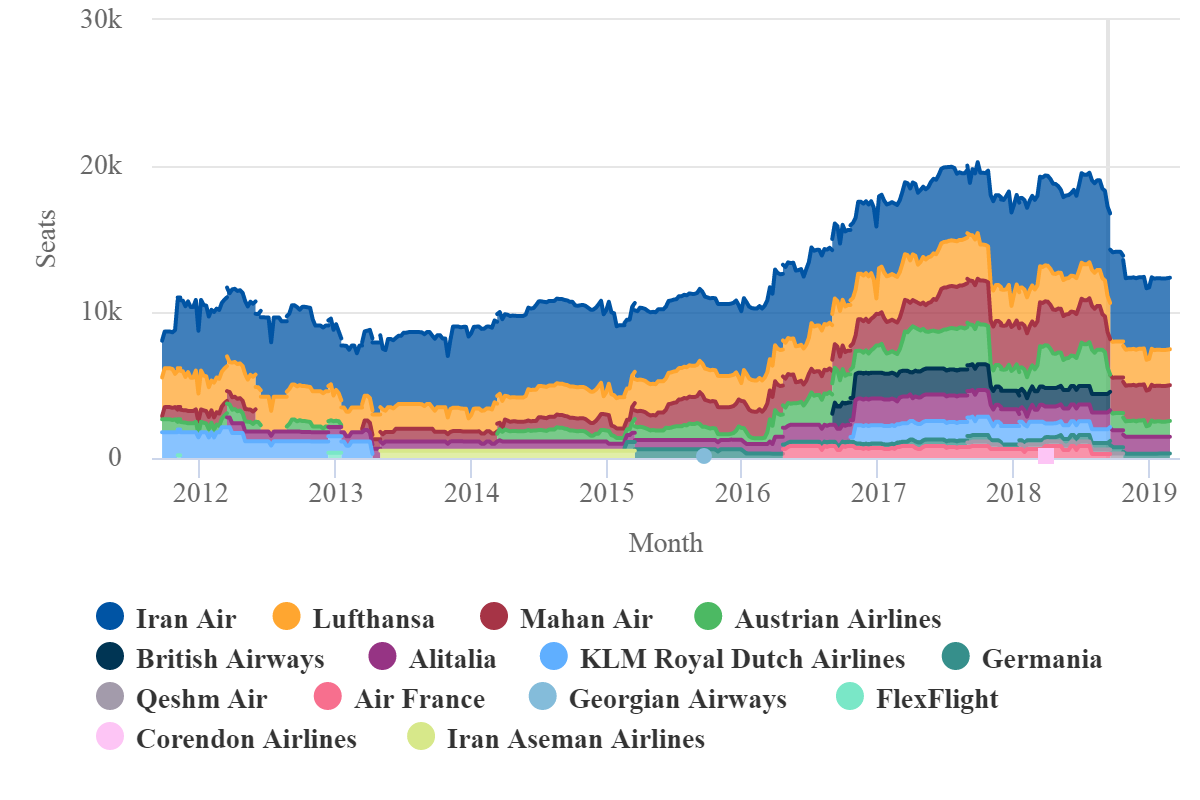 Others are also cutting capacity in this market

Nevertheless, the absence of these three this winter does not explain all of the year-on-year reduction in seat numbers of 10,500 seats, or 30%.

Moreover, Qeshm Air no longer has any Western European capacity filed with OAG this winter (versus 600 weekly seats in Nov-2017).

The number of airlines operating on Iran-Western Europe routes will fall from 10 in winter 2017 to six in winter 2018.

Weekly seat capacity between Iran and Western Europe by airline: Nov-2017 and Nov-2018 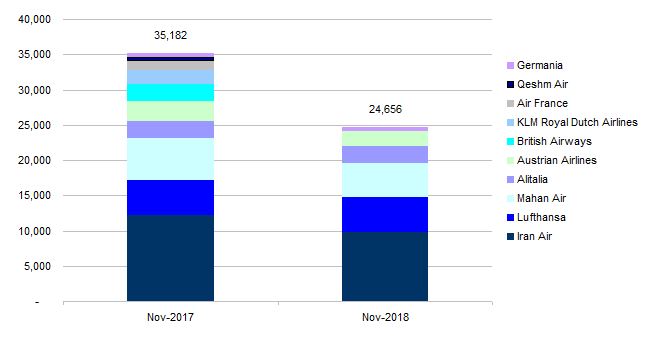 As a result of the withdrawal from Iran of three of Western Europe's biggest airlines this winter, and in spite of Iran Air's own capacity cuts, Iran Air's seat share will increase from 35% in the week of 6-Nov-2017 to 40% in the week of 5-Nov-2018.

Lufthansa, whose capacity is unchanged this winter, increases its seat share from 14% to 20%. This takes it into second place, fractionally ahead of Mahan Air, whose share increases from 17% to just under 20%.

Alitalia's share grows from 7% to 9%, in spite of no change to absolute seat numbers. Austrian Airlines increases its share from 8% to 9% in spite of its capacity cut. Germania's seat share moves from just under 2% to just over 2%.

Share of weekly seat capacity between Iran and Western Europe by airline: Nov-2017 and Nov-2018 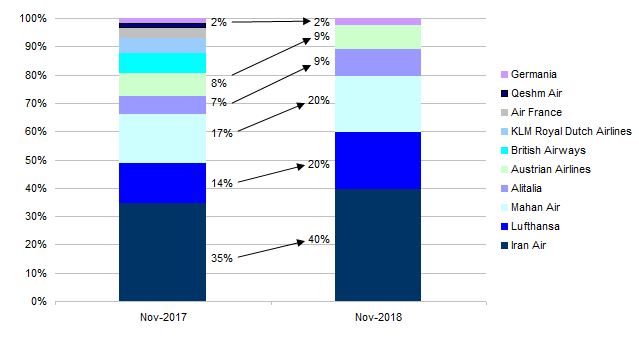 19 routes between Iran and Western Europe in summer 2018

In the summer 2018 schedule there have been 19 routes between Iran and Western Europe (counting Shiraz and Isfahan separately), 16 of which are to/from Tehran and one to/from each of Shiraz, Isfahan and Tabriz.

Iran Air operates on 11 of the 19 routes and is the biggest airline by seat numbers on four of them (Stockholm, Hamburg, Gothenburg and Cologne/Bonn, on all of which it is the only operator).

Mahan Air is present on five routes and is the leading airline on all of them (Paris, Milan, Duesseldorf, Copenhagen and Munich, on the last three of which it is the only operator).

These are all top five routes by seats in the market between Iran and Western Europe, although the top two routes, Frankfurt and Vienna, are not directly affected.

Lufthansa is the biggest operator on Tehran-Frankfurt and its subsidiary Austrian Airlines is the leader on Tehran-Vienna.

*Week of 2-Jul-2018.
**Iran Air switched from Paris ORY in Mar-2018.
***Operated by Air France under the AF code, branded as Joon.
^Operated by Austrian as Vienna-Shiraz-Isfahan-Vienna.
Source: CAPA - Centre for Aviation, OAG.

In the winter 2018/2019 schedule, Iran Air will be the only operator on Tehran-London and Tehran-Amsterdam. On Tehran-Paris, Mahan Air and Iran Air will continue to compete with each other (but no longer with Air France/Joon).

The withdrawals of BA, Air France/Joon and KLM do not affect the number of routes operated in the Iran-Western Europe aviation landscape in the coming winter season.

A larger share of a reduced market may not be desirable, even with less competition

At first sight, it might be expected that the withdrawals of BA, Air France and KLM from Tehran routes represents an opportunity for Iran Air and Mahan Air (the two biggest Iranian airlines between Iran and Western Europe). Both will have a larger seat share and less competition on three routes that are among the top five this summer in the Iran-Western Europe market.

Iran Air is keeping its capacity unchanged on all three routes affected by the withdrawals and Mahan Air is also maintaining its capacity levels on the Amsterdam route (the only one of the three on which it operates).

However, it may be premature to conclude that the changes in this market are positive for Iran Air and Air Mahan. The two Iranian operators are cutting their overall seat capacity and route numbers to Western Europe and a third Iranian airline, Qeshm Air, is withdrawing altogether.

Lufthansa has said that it will continue its Frankfurt-Tehran service, although it continues to monitor developments. The German airline's increased seat share, with flat capacity, could signal an opportunity this winter for it to benefit from any demand spill from London, Paris and Amsterdam from passengers of BA, Air France and KLM that have a preference for a Western European airline.

Iran's Ambassador to the UK, Hamid Baeidinejad, called BA's decision to withdraw "regrettable", citing high demand for the service. However, the return of US sanctions seems almost certain to hit demand.

Boeing confirmed earlier this summer that it will not deliver any aircraft to Iran, in spite of an MoU signed with the nation in 2016 for 80 aircraft for state-owned Iran Air. Airbus has also said that deliveries to Iran would cease from Aug-2018.

The impact on airline operations in Iran from the suspension of aircraft deliveries is mainly in the longer term future. Nevertheless, these decisions are just two illustrations of how sanctions devastate trade, thereby limiting demand for air travel – particularly the higher yielding business travellers that can be the difference between a route's viability and its disappearance.

For Iran's airlines serving Western Europe, a larger share of a much reduced market may not be a good thing, especially if demand is falling. And Western European airlines still serving Iran may not be doing so indefinitely if sanctions remain.