European airlines faced major headwinds in 2010, including a complete shutdown of western Europe’s skies in Apr-2010 and severe winter weather in January and December 2010. Despite these challenges, most have posted year-on-year increases in passenger numbers and load factors. The year recorded a return in premium traffic, which boosted yields, and a strong return to profitability.

Key airlines in western and northern Europe posted largely positive passenger growth in 2010, albeit off a depressed 2009. The increases were achieved despite the impact of the Apr-2010 volcanic ash cloud crisis, which closed European airspace for a week, and severe winter weather in Jan-2010 and Dec-2010.

Not all carriers, however, reported an increase in passengers. Most significantly, the sharpest falls in passenger numbers were recorded by full-service carriers whose core short-haul markets are most exposed to competition from LCCs. 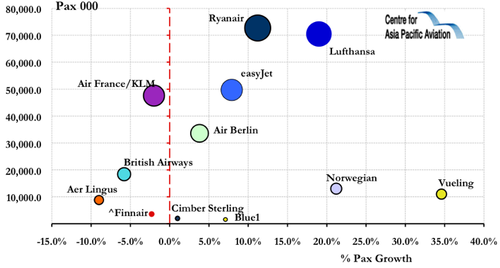 Source: Centre for Asia Pacific Aviation and company reports
^ Finnair intra-Europe traffic only for Europe not including domestic.
* Lufthansa figures are for Lufthansa Group (including Lufthansa Passenger Airlines, bmi, SWISS and Austrian Airlines).

Compounding the issue, Aer Lingus competes with Europe’s most aggressive LCC, Ryanair, on many short-haul routes. Ryanair is largely hedged against decreases in falls in the Irish market, which accounts for only 10% of its O&D traffic. That same figure at Aer Lingus would be upwards of 90%, so it remains hugely dependent on Ireland’s economic position.

Restructuring efforts continue at Aer Lingus, which is seeking to cut unprofitable routes and lower costs to allow the airline to compete more aggressively and achieve sustained profitability. This includes a controversial new roster that has been unilaterally passed onto cabin crews. Strike action was taken at the start of 2011, which resulted in the cancellation of many short-haul services. In light of restructuring efforts and the dropping of unprofitable short-haul routes, there appears to be little short-term upside to Aer Lingus’ short-haul passenger volumes.

British Airways and Air France-KLM were the two major carriers that posted a fall in short-haul markets in 2010.

British Airways has been scaling back capacity on its short-haul network in the current financial year, with capacity only coming back on line in strategic business markets. Short-haul passenger numbers are down 4.8% in the current financial year (since Apr-2010) and down about 6% for calendar year 2010. The airline cut capacity (ASKs) faster than demand fell (RPKs), which boosted BA’s load factor to 75%. Like Aer Lingus, the carrier is also involved in negotiations with its labour unions, which were on strike for 22 days in 2010, including over the peak June/July travel period. BA operates the majority of long-haul services during these periods, but the majority of short-haul services suffer during strikes.

While BA’s short-haul services from Gatwick and Heathrow have fallen, the airline continues to develop its network from its London City base, where it operates to major European commercial centres. In line with increased corporate activity in the City of London, its presence at LCY has grown and it is the only market where BA is growing its short-haul network.

Air France-KLM and BA have high-level exposure to low-cost competition, most notably from Ryanair and easyJet, which both have bases in London and Paris-area airports. LCC penetration of France’s large domestic market remains low compared with the country’s intra-Europe LCC penetration. The domestic market remains crowded with Air France narrowbodies and AF’s short-haul partners. To ward off LCC competition in its home market, where foreign LCCs including Ryanair, easyJet and Vueling have (or will soon have) bases, Air France is reportedly working on developing a low-cost shuttle service on dense routes to maintain its core advantage of hubbing through CDG and Schiphol.

The other major airline group, Germany’s Lufthansa Group, carried 70.5 million passengers in 2010 for year-on-year growth of 19%. The results are, however, skewed by the inclusion of results from subsidiaries bmi and Austrian Airlines, which the airline acquired in 2009 and commenced data recording in 2010.

Lufthansa’s short-haul traffic was a beneficiary of the stronger-than-expected German economy, which enjoyed a surprisingly bounce back to growth in 2010. German industrial activity and consumer confidence rose strongly throughout the year, with the weakness of the single currency a boon to the country’s export-heavy economy. A strong local economy combined with Germans’ high propensity to travel boosted Lufthansa in the year.

Demand up, capacity up across the low-cost sector

The low-cost carriers’ penetration of short-haul markets continued in 2010, with every major LCC growing in the year, often at the expense of the national carrier in their markets. LCCs accounted for 35.3% of capacity in Europe, according to OAG, a 3.2% increase over 2009. This figure is likely to increase in 2010, as LCCs take delivery of more aircraft and increase utilisation rates.

Vueling’s passenger numbers surged 34.5% in 2010 to 11.0 million. The carrier’s results are skewed by its merger with clickair. In the year, Vueling announced plans to open a base in Toulouse, its first outside its home market in Spain. The airline is coming facing increasing competition from Ryanair, which continues to grow strongly.

The Irish LCC increased passenger numbers 11.4% in the year to 72.7 million. Ryanair’s core competence, its nimble and flexible model, came to the fore last year. While continued sluggish growth in its home market in Ireland, the airline moved capacity to higher growth markets in Spain and Italy in 2010, reducing its exposure to the higher-cost Irish market. Ireland now accounts for less than 10% of the carrier’s originating traffic. Load factor for the year was a healthy 82%.

airberlin, which is arguably no longer an LCC, also had a strong year. Its passenger numbers were up 8% to 33.6 million and load factor was up 4.7ppts to 76.7%. In the year, the airline announced plans to join the oneworld alliance and launched several key codeshare agreements with future oneworld partners. Surprisingly, given airberlin’s lower fares, Lufthansa actually grew faster than airberlin in 2010. While airberlin doesn’t release capacity data (ASKs), it is reasonable to expect Lufthansa brought more capacity back in to the market this year. airberlin CEO Joachim Hunold has stated he’ll be slowing growth and cutting routes to focus on more profitable expansion.

Further north, Oslo-based Norwegian Air Shuttle had a very strong growth year. Passenger numbers were up 21% to 13.0 million. The carrier continued to look better than its rival SAS, which still struggles in the Nordic region and talk continues of it being a takeover target. Norwegian’s load factor was down 1ppt to 77% in 2010.

Demand returns but yields much slower

According to IATA, European airlines saw year-on-year passenger demand increase 5.1% in 2010. Following the financial crisis carriers have kept a close eye on capacity deployment, adding only 2.6% more seats in the year, which boosted average load factors to 79.4%. But the industry body has warned that the region’s “economic uncertainty and continuing debt crisis limited yield improvements” in the year. While more bums were on seats, it may be a while before Europe’s airlines are singing the same tune as they were in 2007. 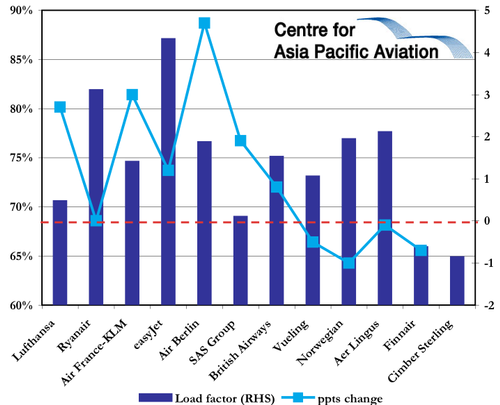