Mexico’s Interjet begins 2014 with hints that it may finally undertake an on-again, off-again initial public offering as hopes are high that Mexico’s economy will improve after a lacklustre performance during 2013.

Near the end of 2013 Mexico’s publicly traded carriers Aeromexico and Volaris were battling weak yields, trading in pricing traction to maintain load factors as conditions in the Mexican domestic market were challenging. As Mexico’s second largest carrier in terms of seats on offer in the country’s domestic market, privately-held Interjet also likely experienced some yield pressure during 2013.

Interjet continues its growth in 2014 as it accepts more deliveries of the 93-seat Sukoi Superjet 100 narrowbody jets that should aid the carrier in penetrating smaller markets and perhaps right-sizing capacity during less busier times on trunk routes. At the same time the carrier is considering building Guadalajara into a hub, following the launch of new international flights from Guadalajara to San Antonio in Dec-2013.

In Nov-2013 Interjet executive vice president Miguel Aleman Magnani told Bloomberg the carrier was examining a public offering in 2H2014. Interjet shelved plans for an IPO during 2011 citing a “complex situation” in the global financial markets. But following the public offering of Interjet’s rival Volaris in 2013 that fetched USD336 million, Mr Magnani declared that Interjet’s market value post-IPO could be slightly higher than Volaris due to Interjet’s higher profit margins.

Volaris bills itself as an ultra low-cost carrier while Interjet adopts a more hybrid business model designed to capture corporate traffic through, among other product attributes, roomier seat configuration on its 150-seat Airbus A320s.

Interjet cites a positive economy in Mexico during 2014 as one factor driving its decision to go public. The carrier also likely needs funds to support its fleet expansion. In addition to the 20 Superjet 100s joining its fleet, Interjet also has 40 A320neos on order, which results in Interjet having a larger orderbook than rival Volaris.

Hopes by Interjet and other carriers for an improving Mexican economy during 2014 follow a weak performance during 2013. For the first seven months of 2013 Mexico’s general economy activity indicator notched up just 1.2% compared with 4% the year prior. During 3Q2013 Mexico’s finance ministry lowered the country’s economic growth forecast from 3% to 1%.

The weak economic conditions helped to topple yields at Aeromexico and Volaris during 3Q2013 by 8.9% and 12.8%, respectively, as pricing traction slipped. Some of the yield decline at Aeromexico was deliberate. It has recently adopted a strategy to boost its loads in order to regain some lost market share due to rapid expansion by Interjet and Volaris.

Remarks by Mr Magnani seem to indicate that perhaps Interjet weathered the weak Mexican economy a bit more favourably; however, Mexico’s four major carriers – Aeromexico, Interjet, Volaris and VivaAerobus – are all vying for the millions of passengers that still travel by bus. Even if there is a rebound in Mexico’s economy during 2014, more price sensitive travellers may still be cautious in their spend on air travel, so a rebound in pricing could not occur immediately.

Still, Interjet recorded strong growth in its passenger numbers through Nov-2013, with particularly strong year-on-year increases in Jun-2013 of nearly 33% and 23% in Jul-2013. But again, like its Mexican rivals, Interjet is likely trading loads for yields in order to maintain its hard-won domestic market share, which was 24% in Nov-2013. 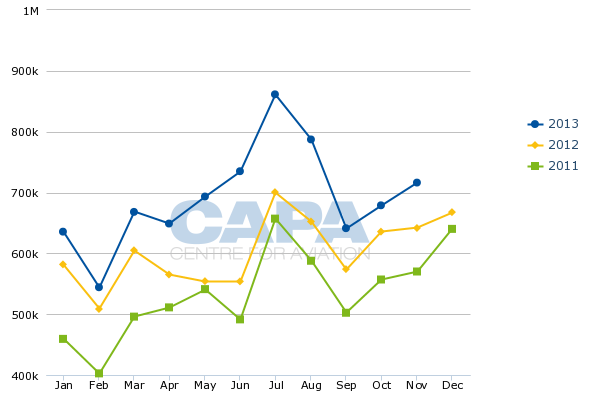 Guadalajara could be a growth market for Interjet in 2014

In early Jan-2014 reports surfaced in the local Mexican press indicating that Interjet was examining establishing a hub in Guadalajara.

Guadalajara, the second largest city in Mexico based on population, has emerged as a focal point for both Volaris and Aeromexico during the past couple of years. Monterrey-based VivaAerobus also opened a Guadalajara base in 2009.

It seems natural for Interjet to bolster its position from the airport in order to remain competitive with its rivals. Guadalajara is Mexico’s second largest market based on weekly arrivals. 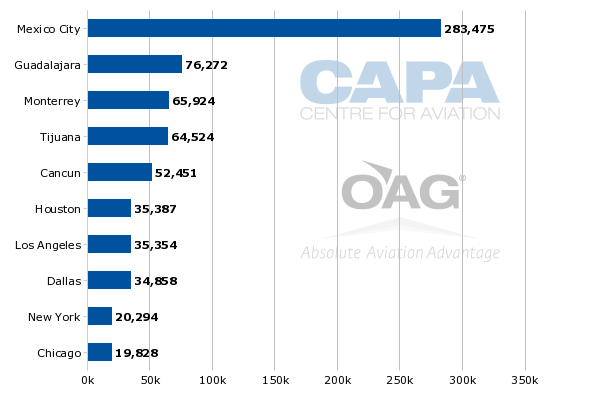 During 2012 Volaris made a domestic push from Guadalajara to solidify its commanding position at the airport. Volaris currently accounts for a leading 38% share of domestic capacity at Guadalajara. 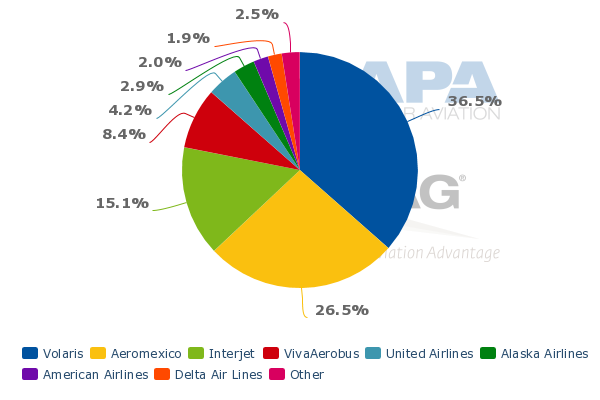 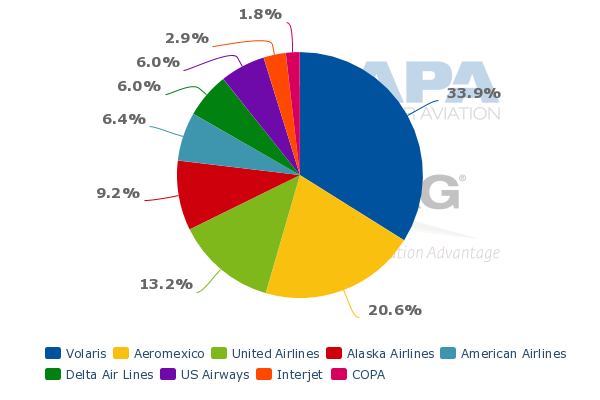 Aeromexico made a push from Guadalajara during 2013 with the launch of a low-fare branding exercise dubbed Contigo that features four higher density 737s largely deployed from Guadalajara. Contigo aircraft are operated in four transborder markets from Guadalajara – Ontario, Los Angeles, Fresno and Sacramento – and on domestic flights to Tijuana Culiacan.

Executives from Interjet told local press outlets that the carrier was examining building connectivity over Guadalajara, and mentioned markets such as Cancun. During the past couple of years Cancun has experienced record growth in Mexican domestic passengers driven by expansion from Volaris and VivaAerobus. Those carriers are targeting passengers in Mexico’s growing middle class eager to travel to leisure destinations within the country.

Interjet possibly sees an opportunity to deploy its smaller Superjets in Guadalajara in thin markets to transfer passengers over Guadalajara to leisure destinations. At the end of 2013 Interjet had taken delivery of four Superjet 100s, and deployed the first couple of aircraft on routes from Mexico City including Manzanillo, Mazatlan and Torreon. But given Mexico City is slot restricted and congested, there may be more opportunities to use the Superjet on point-to-point routes bypassing Mexico City.

However it plans to leverage its smaller gauge fleet in Guadalajara, there are likely only a few small markets that are not penetrated by Aeromexico Connect, which means Interjet will encounter Aeromexico in many of the new markets where it plans to deploy the Superjet 100s. While there are some market stimulation opportunities in Mexico, its four major carriers will continue to bump into one another in their respective efforts to build or preserve market share.

Mexican airlines seem to base their orderbooks on traffic stimulation models

Interjet, Volaris and VivaAerobus were three of the many low-cost carriers that emerged in Mexico in the mid-2000s after the market was deregulated. Those three airlines managed to persevere and survive after several carriers collapsed between 2008 and 2010 including Mexicana.

During the last two to three years Interjet and Volaris have at times traded off taking the second or third ranking in the Mexican domestic market. For the first 11 months of 2013 Interjet was Mexico’s largest domestic low-cost carrier, transporting 6.8 million passengers. Volaris carried 6.4 million domestic passengers during that time, but still had a larger international presence than Interjet. In the first 11 moths of 2013 Volaris transported 1.3 million international passengers versus 834,000 carried by Interjet.

Additionally, Aeromexico has 60 Boeing 737-8 Max aircraft on order. All four carriers will use some of the new aircraft as replacements, but a portion are also dedicated to growth based on their stimulation calculations. Interjet in 2012 estimated more than 97 million passengers in Mexico travelled on long-haul luxury and premium intercity buses at fares that were similar to the prices it charged at that time.

Is a further shakeout in Mexico’s domestic market possible?

Mexico’s market dynamics should prove interesting during 2014 whether or not the hoped-for economic improvement materialises. In the best of conditions it is highly questionable if the country can sustain one fully-fledged network carrier and three low-cost carriers. Both Volaris and VivaAerobus operate under a true low-cost scheme while Interjet offers a bit more comfort and frills.

For the moment Aeromexico and Volaris have surrendered yields for load factors, which is unsustainable over the long term. Interjet, Volaris and VivaAerobus are likely examining branching out into markets in Latin America with little low-cost penetration, but those routes take time and resources to develop. Those airlines will need strong domestic operations to support further international growth.

While the Mexican aviation industry is finally evolving into a more rational and steady state, another shakeout cannot be ruled out. Especially if the stimulation models touted by the country’s main carriers fail to meet their expectations.