As Indigo Partners moves closer to finalising its acquisition of Frontier Airlines and heightens the efforts underway to transition the airline into a true ultra low-cost carrier similar to Spirit Airlines, certain nuances to Frontier’s strategy should prove interesting for Indigo to navigate as it works to place Frontier squarely in the US’s growing ultra low-cost business model. Overall, the ultra low-cost business scheme has so far proven fruitful for Spirit in terms of the carrier’s financial performance; but passengers still bristle about being nickel and dimed even though they are paying base fares lower than most other airlines (even so-called low-fare airlines) by a significant margin.

Headed by former Spirit Airlines chairman William Franke, Indigo was a major owner of Spirit as it began the transition to an ultra low-cost carrier in 2006. As is now well documented, he set the wheels in motion to purchase Frontier earlier in 2013 when he resigned as Spirit’s chairman and Indigo sold its stake in Spirit.

The deal is expected to close some time during 4Q2013; but Indigo has no doubt been plotting a strategy specific to Frontier’s network to ensure the successful execution of the business model change. It is a formidable challenge for a long-standing brand that for a long period of time offered at least some medium frills. Indigo’s biggest challenge may lie in avoiding isolating a loyal Frontier passenger base in Denver that has already endured a number of significant changes since its 2009 purchase by Republic Airways Holdings.

As Frontier was executing a USD136 million cost cutting scheme during 2012 it was also exploring varying network options that included a short-lived focus city experiment in Colorado Springs, and some point-to-point flying from Orlando. More recently, a secondary airport strategy in the US northeast in Trenton, New Jersey and Wilmington, Delaware, has emerged.

The carrier seems willing to press forward in the build-up of Trenton and Wilmington as it presently serves nine markets from Trenton – Atlanta, Chicago Midway, Columbus (which is ending in Jan-2014), Detroit, Fort Lauderdale, Orlando, Tampa, Fort Myers, and Raleigh-Durham. New route additions for early 2014 include Cleveland, Indianapolis and Nashville.

Frontier has a unique network strategy in that it offers fewer frequencies (roughly two to five per week) on service from Trenton and Wilmington, and more dense schedules from its Denver hub.

The secondary airport strategy aims to appeal to cost-conscious travellers in the catchment areas of Philadelphia (58km from Trenton) and Newark (72km from Trenton). Its alternate airport in Wilmington is roughly 48km from Philadelphia. For the moment Frontier seems to be willing to try different markets from those two airports, and its schedules generally seem to reflect capacity levels aimed to match demand.

See related report: Frontier has numerous fits and starts in its network as it remains on the selling block

While it is easy to assume that Indigo will model Frontier’s ultra low-cost transformation on Spirit’s successful ULCC implementation, beneath those generalisations are some business aspects that are unique to Frontier, which will make the transition interesting to watch as it unfolds.

After successfully executing the ultra low-cost model in Fort Lauderdale that has an inherent, cost-conscious, visiting friends and relatives passenger base, Spirit has forged a path to replicate its stimulation strategy in large US metropolitan markets during the past three years. The key is stimulating enough traffic to cover its, on average, one or two daily flights in a market without encroaching on the passenger segments targeted by hybrid and traditional network carriers.

Spirit’s roughly USD6 cent unit cost, excluding fuel, recorded during 1H2013 gives the carrier a certain agility to expand rapidly into new markets and shun them if they don’t spool up within a reasonable amount of time to the carrier’s expectations. Frontier recorded unit costs excluding fuel of nearly USD7.7 cents during 1H2013, which shows the carrier has a gap to fill in order to get to ULCC levels.

As Frontier has moved from a hybrid airline to adopting strategies of the ultra low-cost model, it is tough to determine if its historically loyal passenger base in Denver has accepted the changes. Despite the network diversification, Denver still represents the bulk of Frontier’s seat deployment, and its top 10 domestic markets in terms of seats on offer still originate in Denver to mostly large metro markets served by its main competitors at the airport, United and Southwest. 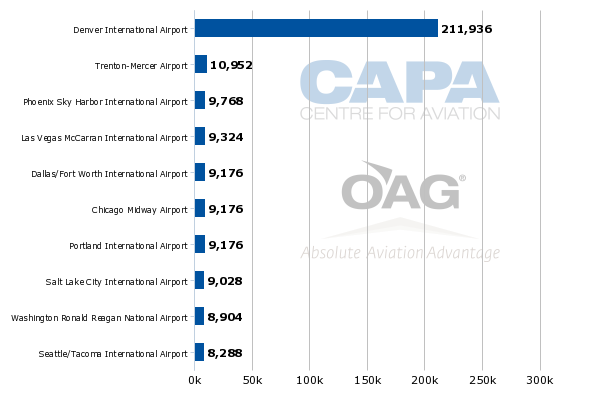 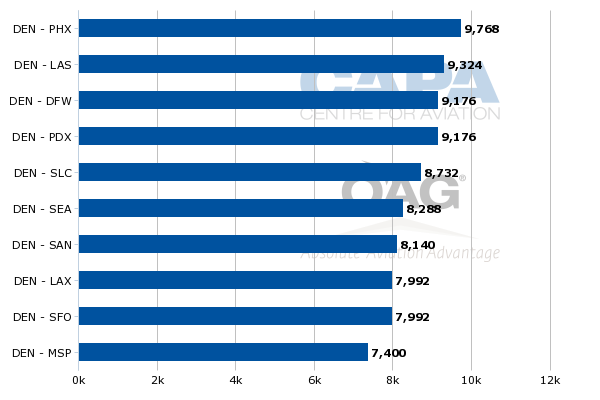 Even as Frontier began charging for soft drinks in Jul-2013 and a month later instituted charging carry-on luggage fees to passengers who booked outside its web site, its load factors have reached record levels, including 92% for the month of Oct-2013. Given that Denver still represents the bulk of Frontier’s operations, it seems that at least some passengers are remaining loyal. It is not clear if Frontier is attempting to educate its passengers about the ongoing transition, but perhaps it would be wise for some of the cash infusion Indigo has pegged for Frontier to be dedicated to communicating the changes in its business model.

Or alternatively, perhaps Indigo believes there are stimulation opportunities in Denver as United and Southwest (the two largest carriers in the market in terms of seats on offer) have cost bases that only allow for certain fare levels. Although it can be argued that perhaps they can match Frontier’s current fare levels since Frontier’s costs are still higher than the Spirit’s benchmark ULCC unit costs. Once Indigo solidifies its plan to trim Frontier’s costs, perhaps Frontier can create some stimulative effects in Denver. 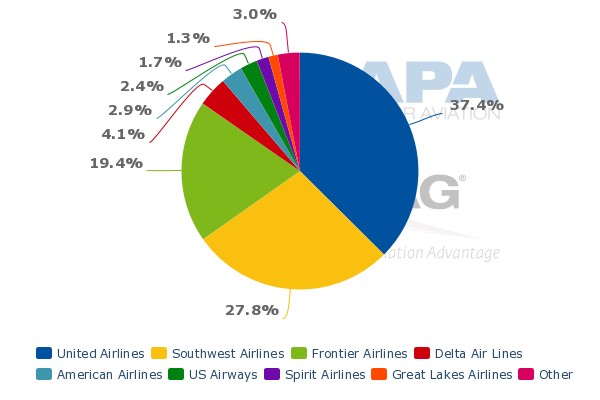 Through 2Q2013 Denver’s average fare (not adjusted for inflation) was USD323 compared with a US domestic average of USD377. Fort Lauderdale (Spirit’s headquarters and one of its largest bases) – which had an average of USD275 – generally has a higher leisure bent, so the stimulative effects are easier in that market. However, Spirit seems to be executing is stimulative strategy in more traditional business markets including Dallas/Fort Worth and Chicago, which could mean Frontier has a chance to do the same in Denver – it all comes down to the success or failure of getting costs to the levels of Spirit and Allegiant, whose unit costs excluding fuel was USD5.8 cents during the first six months of 2013.

Las Vegas-bases Allegiant, though categorised within the ultra low-cost genre, has a different model in that it offers low-frequency service to heavily travelled leisure destinations from small US cities. It has also tried to replicate its model in Hawaii with limited success.

Indigo assumes control of Frontier with some lingering challenges from unions

At the same time passengers have had to adjust to Frontier’s changing business model, its employees have faced a certain level of uncertainty since Republic’s acquisition of Frontier in 2009.

As part of agreed-to concessions in Frontier’s cost-cutting scheme, the carrier’s pilots and flight attendants negotiated equity rights in the company. The purchase agreement between Republic and Indigo was contingent on Indigo resolving those ownership issues with each labour group. Indigo has a tentative deal with pilots, but agreed to waive the condition to reach a deal with flight attendants to move forward with the sale.

As flight attendants concluded they stood against strong demands to relinquish their collective ownership in the carrier, Indigo heads into its new ownership of Frontier with a bit of union overhang, but ultimately has decided the risk-reward scenario is worth some labour contention.

The total purchase price of USD145 million Indigo has agreed to pay for Frontier (a USD36 million purchase price and the rest in assumed debt) is likely somewhat of a small risk for the company that has also been involved with global low-cost carriers including Volaris, Wizz Air, Avianova and Tiger Airways. Frontier’s history dictates some unique challenges as Indigo assumes control of the carrier, but the private equity firm’s track record in the ultra low-cost space proves for interesting times as it embraces the nuances in Frontier’s operations that are needed for the carrier to truly transform into a viable ultra low-cost carrier.