Denver-based Frontier Airlines has experienced a vast upheaval during the last few years. Acquired by US regional operator Republic Airways Holdings in 2009, Republic decided more than a year ago to spin-off or sell Frontier.

Meanwhile, during its time as a subsidiary of Republic, Frontier has successfully executed a cost cutting scheme and network overhaul that has largely produced favourable results. As it worked to achieve cost efficiency Republic management declared its intent to transform Frontier into an ultra low-cost carrier to mimic the cost structure of other US carriers in that genre, namely Allegiant and Spirit.

But as Frontier has worked to improve its fortunes it has not developed a business model that falls strictly into a no-frills offering in the same vein as Spirit Airlines. Its network is a mix of flying from a hub in Denver and point-to-point operations largely from Orlando and its new focus city of Trenton, New Jersey. Frontier lacks the scale to develop into a full-blown hybrid carrier like JetBlue, yet does not strictly adhere to a pure leisure focus.

Unlike the two major hybrid carriers in the US, Alaska and JetBlue, who leverage their respective leading positions in Seattle and JFK to forge favourable partnerships with other carriers, Frontier is saddled with heavy competition from United and Southwest in Denver.

Combined, those two carriers account for roughly 67% of Denver’s seating capacity, compared with approximately 17% for Frontier. 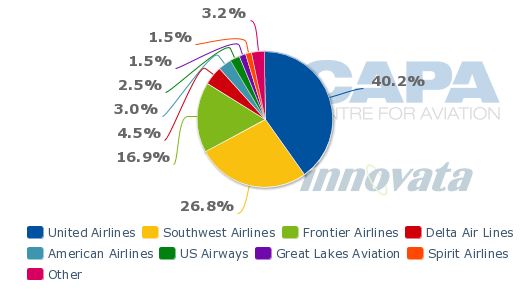 By contrast Alaska holds a 54% seat share in Seattle and JetBlue on a system-wide basis has a 24% share at JFK. But JetBlue’s domestic share at its largest base is 36%, supplying the carrier with an attractive scale to forge partnerships primarily with international carriers. JetBlue has more than 20 interline partners, and recently announced one-way codesharing with Aer Lingus and Qatar Airways. The carrier has also recently indicated it might introduce two-way codeshares in the near future.

Frontier is a small airline searching for an identity

With the network overhaul Frontier completed during 2012, which entailed the elimination of Midwest hubs in Milwaukee and Kansas City (Republic also purchased Midwest in 2009 and later folded its operations into the Frontier banner), Frontier has positioned the majority of its operations in Denver, which is the carrier’s top base and headquarters. 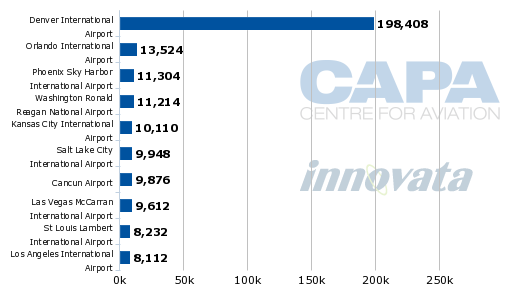 Recently Frontier management explained how the carrier approaches its low-frequency operation noting that it combines multiple routes with a single aircraft for frequencies that range on its offerings from two to six per week. The carrier stated that it has seen some success with the approach in Denver; but took care to stress the approach was not driving Frontier’s utilisation lower. The airline is “simply lacing together the aircraft in a different way”.

Frontier records unit costs that move it away from an ultra low-cost model – a hybrid?

Frontier’s efforts in using a low-frequency approach in certain markets requires a certain cost structure. The ultra low-cost leader in the US and pure leisure operator Allegiant Air recorded unit cost of USD5.32 cents for FY2012, the best among any type of US airline. Allegiant’s fellow ultra low-cost carrier Spirit had unit costs of USD6 cents. Frontier’s 2012 unit costs of USD7.19 cents were higher than the USD6.99 cents recorded by JetBlue, which has proclaimed itself to have found a cost structure sweet spot centred between the ultra low-cost carriers and the legacy airlines. JetBlue’s product design is a medium frills model, where it offers some perks free and charges a fee for more premium offerings.

Frontier’s 2012 unit costs increased about 3.4% year-over-year, with the carrier gaining some unit cost benefit in 2011 from restructuring and some lease concessions on its Airbus aircraft. While it has worked to transform itself into an ultra low-cost carrier, in reality Frontier appears to have adopted the hybrid business model of Alaska and JetBlue.

Both JetBlue and Frontier offer satellite television. Frontier charges for the service while JetBlue offers certain satellite television content to passengers free of charge and also sells more premium television and movies. Frontier also has a higher level of complexity than Allegiant or Spirit as the carrier was an early adopter of fare bundles that are now popular in the US aviation industry. Since 2008 the carrier has been offering three fare bundles that include varying degrees of products – preferred seating, same-day standby, premium beverages, miles accumulation and change fee waivers – at tiered pricing levels.

The fare bundles have survived the change in ownership, so the tactic must be assumed a positive contributor to Frontier’s revenue.

Frontier also offers a stretch seating option with 36in of pitch and the opportunity to buy seats in advance that are closer to the front of the aircraft. All of these product offerings are more reflective of a hybrid business model than an ultra low-cost offering. While Spirit essentially charges for all aspects of travel beyond the ticket and Allegiant has deep partnerships with hotel and rental car companies to offer packaged travel, Frontier’s approach is more reflective of carriers looking to boost ancillary sales primarily through the unbundling facets of the air travel experience, and then rebundling them in packages for upsell.

During the last year it seems Frontier has consequently been straddling the ultra low-cost and hybrid business models, and during a recent discussion investors queried Frontier over its business strategy, drawing attention to the strength of Spirit’s returns.

Data from Alaska Airlines show that based on carrier-reported return on invested capital (ROIC), Spirit soars above all carriers at 26.5%, including Alaska, which has been a pioneer in using the ROIC metric and has consistently beat its internal targets in that measure.

ROIC has only began surfacing in airline financial discourse, and given its relative youth in that regard there are many methods carriers use to calculate the metric. Based on Alaska’s calculation – (EBIT + lease interest) – taxed at 40%/(average long-term debt + book equity + capital operating leases.

Reported ROIC by US carriers and adjusted for Alaska Air's calculation: 2012 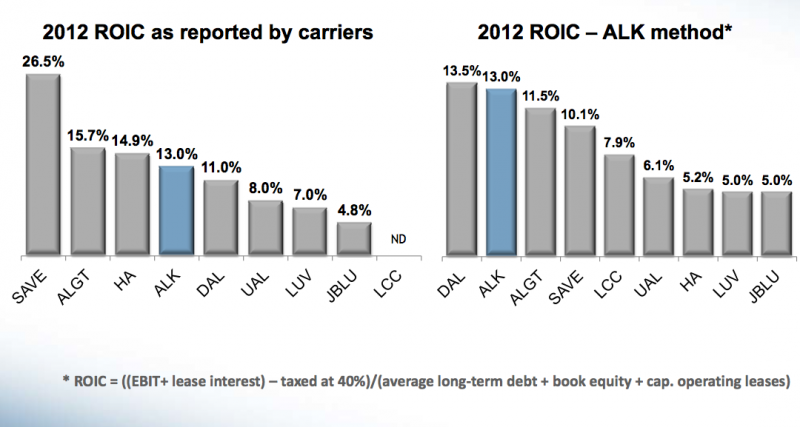 Frontier’s management noted that in terms of density per aircraft, the seat-count on its Airbus aircraft is closer to Spirit’s Airbus narrowbody configuration. Frontier operates its A320s with 168 seats, and is considering adding six more seats to the jets for a total of 174 – versus a 178-seat configuration on Spirit’s A320s.

But at the same time Frontier executives noted that premium seats and products, which do reduce seating capacity by a small amount, do create differentiation and importantly, meaningful additional ancillary revenue flow.

As Frontier continues to work through establishing a business model while it remains on the selling block, the carrier has produced solid revenue performance as top-line revenues during 2012, excluding special items, grew 7% year-over-year to USD1.4 billion and unit revenues factoring out special items increased 5.8%.

The airline also has the benefit of competitive capacity in Denver mostly being rational during the last few years even though it competes with two of the largest US carriers at its headquarters, hub and largest base.

Its unit costs during 2012 did not reach the level of ultra low-cost carriers, but Frontier could be inching closer to becoming a smaller hybrid carrier in the US market place, which puts the carrier in untested waters as potential buyers evaluate the carrier’s business plan.

Republic executives throughout the majority of 2012 and continuing into 2013 have said that 2013 would be the year that Frontier’s fate would be solidified. The latest target is to announce a plan going forward by the end of 1Q2013.

As the evaluations of how to monetise Frontier continue, the carrier appears to be gravitating towards a hybrid model. The US industry overall continues to redefine itself in the aftermath of legacy carriers reaching maturation, by consolidating into three major network carriers, Southwest (moving more into legacy territory) and the emergent hybrids and low-cost carriers vying for passengers abandoned by network airlines.

For the time being it is not clear where Frontier will ultimately fall within the new framework; but a number of prospective new owners could have distinct ideas of the carrier’s path forward. At least its current seemingly ambiguous starting point may offer some options for a new owner.