US ultra low-cost carrier Frontier Airlines has made sweeping changes to its network during the last few weeks as it attempts to find the right mix of profitable routes that act as shields from one of its largest competitors, Southwest Airlines.

The changes include axing a short-lived focus city in Colorado Springs, hopping between airports close in geographical distance and introducing new seasonal flights from its Denver hub. Despite the end to the brief test case of the Colorado Springs focus city, Frontier for now remains committed to building up point-to-point service from Trenton, New Jersey and Orlando, Florida.

While the argument could be made that Frontier’s swift reaction to ever-changing market conditions reflects the nimbleness that its smaller size allows, the constant upheaval could be a turn-off to customers that expect a certain level of network consistency. And as Frontier’s parent Republic Airways Holdings works to secure a sale of Frontier in early 2013, would-be buyers may be scratching their heads over the long-term value Frontier might provide.

Along with testing new focus cities, Frontier’s network rejig has also included the elimination of hubs in Kansas City and Milwaukee that were hubs for Midwest, which Frontier absorbed after Republic purchased both Midwest and Frontier in 2009. Eliminating those hubs was part of a successful undertaking by Frontier to shed USD135 million as part of a cost improvement programme the carrier initiated in 2011.

Frontier is completely eliminating service from Colorado Springs in Apr-2013 after deciding to make a push from the airport located roughly 117km south of its main hub in Denver.

Frontier’s initial route cuts from Colorado Springs are San Diego and Orlando in Feb-2013 and Denver in Mar-2013. At one point the carrier aimed to leave service to Phoenix and Los Angeles intact, but those routes will be eliminated in Apr-2013 and Mar-2013, respectively. Frontier was uncontested in the Orlando and San Diego markets, and faced familiar competition with United on service from Colorado Springs to Denver and Los Angeles. Low-fare leisure carrier Allegiant Air previously serviced Phoenix Mesa (Frontier served Phoenix Sky Harbor) from Colorado Springs, but ended that service in Sep-2012.

The rapid expansion from Colorado Springs resulted in Frontier’s seat share in Colorado Springs accelerating during the last year. At the beginning of Aug-2012 its share of weekly seats was roughly 13%, and has increased 7ppt to 20% for the week of 18-Feb-2013 to 24-Feb-2013. 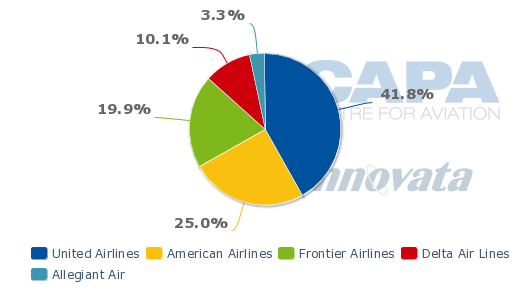 Once Frontier exits the Colorado Springs market completely the airport will largely be left with service by US major carriers that operate flights to their major hubs – American to Dallas/Fort Worth, Delta to Atlanta and Salt Lake City and United to Chicago O’Hare, Los Angeles, Houston and Denver. Allegiant presently operates about two weekly roundtrip flights between Colorado Springs and Las Vegas.

In outlining the reasoning for the axing of point-to-point service from Colorado Springs Frontier senior vice president commercial Daniel Shurz told the The Colorado Springs Gazette bookings were strong in the spring and summer months, but began declining in the fall, which resulted in Frontier being forced to discount fares. The expansion from Colorado Springs was more of a challenge than Frontier anticipated as customers realise they have access to low-fare flights to virtually any market of significant size from Denver, said Shurz. He explained during high demand periods Frontier could achieve favourable price points from Colorado Springs “but the trick is not doing it in July, it is doing it in enough months to generate a profit”, he explained.

Even with the normal airport incentives of reduced landing fees and marketing support Colorado Springs’ stint as a focus city for Frontier lasted less than a year. With low-fare carrier Southwest and Frontier’s low-fare service available just a short drive to Denver, it was likely tough for Frontier to find a pricing point that would deter Colorado Springs’ passengers from opting to access a wider array of choices and connections from Denver.

It is not clear if Frontier will fair any more favourably with its focus city in Trenton, New Jersey, which is 58km from Philadelphia (US Airways’ hub) and 72km from Newark (United’s hub). But the carrier is making a marked push from Trenton, creating a US east coast focus city from which it will serve 10 destinations by mid-Apr-2013.

Frontier’s development of Trenton as a focus city began in Nov-2012 when the carrier introduced flights to Orlando. Service to Fort Myers, Tampa and Fort Lauderdale, Florida and New Orleans, Louisiana followed in Jan-2013 and Feb-2013. During Apr-2013 Frontier is adding new service between Trenton and Raleigh-Durham, Atlanta, Chicago Midway, Detroit and Columbus, Ohio.

Frontier's route offerings from Trenton as of Apr-2013 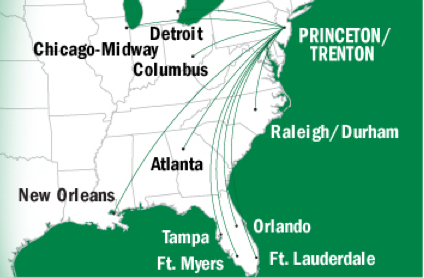 The same challenges Frontier faced in Colorado Springs could resurface in Trenton as each market the airline is introducing is served amply by low-fare and major carriers. In the Florida leisure markets of Fort Lauderdale, Fort Myers, Orlando and Tampa, there is substantial service on offer from both legacy and low-fare carriers – US Airways, Southwest and AirTran from Philadelphia and United and JetBlue from Newark. The other large markets – Atlanta, Chicago and Detroit are also served by the major carriers (American, Delta, United, US Airways and Southwest) from each airport.

In some respects Frontier could find itself in an even more challenging scenario in Trenton than in Colorado Springs as many markets it is targeting from Trenton is served by two-to-three carriers from both Philadelphia and Newark. Frontier faced no competition in some of the markets from Colorado Springs and only United in others, which allowed for some rational pricing. Given that ample service exists from Philadelphia and Newark in the majority of markets Frontier is introducing from Trenton, gaining pricing traction could prove to be a challenge. Especially given the scale the major carriers have to absorb undercutting Frontier’s prices for as long as it takes to potentially drive the carrier out of those markets.

Frontier during 2012 also made a point-to-point push from Orlando, Florida in an attempt to capitalise on routes eliminated by AirTran as its new parent Southwest Airlines trimmed what it deemed as unviable routes in AirTran’s network. Presently, Frontier operates service from Orlando to its Denver hub; Allentown, Pennsylvania; Bloomington-Normal, Illinois; Trenton, New Jersey; Columbia, Missouri; Greensboro, North Carolina; Harrisburg, Pennsylvania; Madison, Wisconsin; Milwaukee, Wisconsin; Omaha, Nebraska and Shenandoah, Virginia. Most of the new routes appear to remain intact with the exception of Shenandoah, which Frontier plans to eliminate in Apr-2012, citing weak demand during the summer season.

In the majority of its markets from Orlando International Airport, Frontier faces no competition. The exceptions include Delta’s service to Omaha, United and Southwest serving Denver and AirTran, Delta and Southwest operating service to Milwaukee. Allegiant Air has one of its major bases at nearby Orlando Sanford Airport (39km from Orlando International), and also offers flights to Allentown, Bloomington-Normal, Greensboro and Harrisburg. Both carriers offer low-frequency service from the Orlando area targeting leisure travellers, but it appears so far they have been able to co-exist on their competing routes. Allegiant bills itself as a more comprehensive total travel provider and builds strong ties with hotels in the leisure destinations it serves to offer its customers comprehensive travel packages.

Frontier during 2013 is also shifting its operations from Denver in the state of Ohio, ending flights to Dayton and launching service to Cincinnati (102km from Dayton) and exiting the Akron-Canton market in favour of Cleveland (65km from Cleveland).

The markets Frontier has opted to cut – Dayton and Akron-Canton – are notably served by Southwest, which initiated service to those cities in late 2012 as they were phased out of AirTran's service while Southwest worked to transition some of AirTran’s markets to Southwest branded flights (following the acquisition of its smaller low-cost rival in 2011). Reports in the local press reported that Frontier representatives told the operator of Dayton airport that it would not compete against Southwest, which launched service from Denver to Dayton in 2012.

Since Southwest’s re-entry into the Denver market in 2006, Frontier has adopted various strategies to dodge as much direct competition with its low-fare rival as possible as Southwest targets the same cost-conscious consumers as Frontier. A relatively peaceful co-existence has occurred between Frontier and Denver’s largest carrier United since the two carriers can achieve rational pricing and maintain reasonable levels of supply on duopoly routes. It is interesting that Frontier determined it could co-exist with AirTran, (which on average had lower system-wide yields than Southwest prior to the acquisition) from Denver.

See related article: Frontier encouraged by its strategy of dodging Southwest in Denver, but looks for new bases

Once Frontier launches service between Denver and Cincinnati in May-2013, approximately 1,768 seats will be available in the market, with Frontier holding a 49% share, Delta representing a 39% share and United accounting for the remaining 12%. Cincinnati is still technically a hub for Delta Air Lines, but given its 368km proximity to Delta’s larger Detroit hub, which Delta acquired through its 2008 merger with Northwest, Cincinnati’s importance as a major connection point has diminished in the merged carrier’s network. Frontier and Delta could possibly co-exist in Cincinnati since the market is not as strategic to Delta as it once was, and the carrier only connects to its other hubs through Denver. 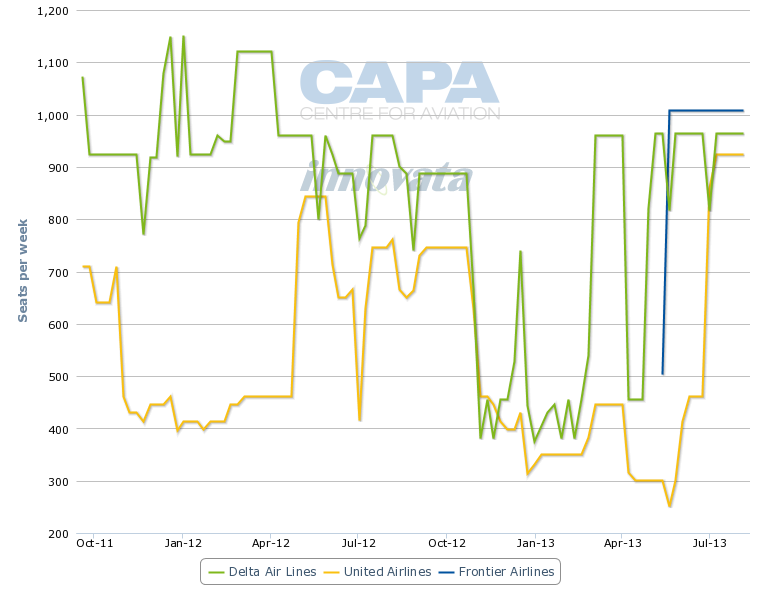 Presently Frontier and United offer approximately 3,435 one-way weekly seats between Denver and Cleveland, with Frontier representing a 20% share and United accounting for 80%. Given the shorter distance between Cleveland and Akron-Canton, it might not be a given that Frontier can shield itself from competition with Southwest by simply changing venues. Depending on how aggressively Southwest is marketing its Akron-Denver service, customers might be enticed to drive to Akron. 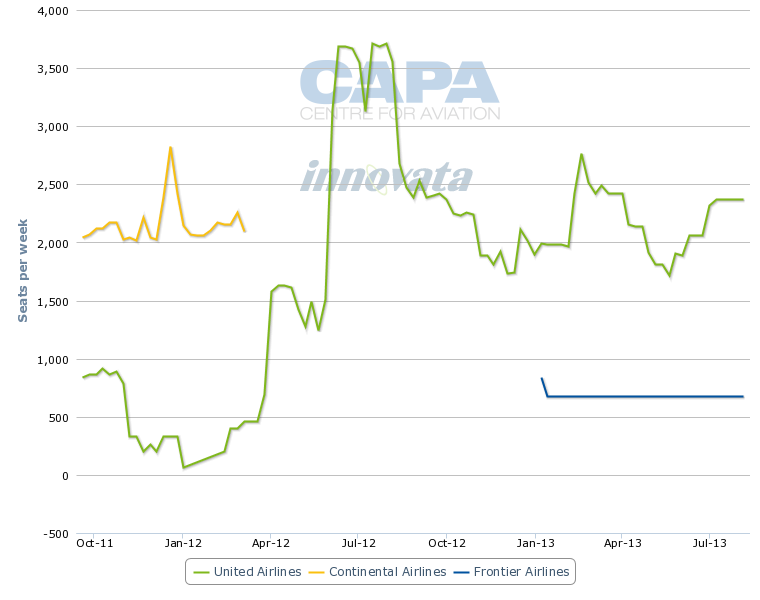 Frontier is rounding out its network changes during the first part of 2013 with the introduction of new seasonal flights from its Denver hub to Eugene, Oregon and Greensboro, North Carolina. Frontier will operate its 138-seat Airbus A319 aircraft on the service to Eugene, and compete with United, which presently offers 50-seat regional service on the pairing. The University of Oregon is based in Eugene, and the city is also popular with outdoor enthusiasts and has a strong arts community.

Frontier faces no competition on the new service to Greensboro, and when the carrier unveiled its service the Greensboro airport operator noted the flight would give area residents access to a new low-cost gateway to the US west coast. Delta and US Airways essentially split the majority of the seats on offer from Greensboro, with service to their major hubs of Atlanta, Detroit, New York LaGuardia, Charlotte, Philadelphia and Washington National. Presently the most western US destination available from Greensboro is American’s hub at Dallas/Fort Worth served with regional jets. Frontier could have some success with Greensboro as it is shielded from direct competition on the route and the lack of service to Greensboro from other western hubs. Given Frontier is touting connections to 16 markets from Greensboro via Denver, the service could be a strong candidate for year-round flights.

During the last few years Frontier has endured tremendous upheaval from Chapter 11 bankruptcy protection to being acquired by Republic and now being on the selling block once again. During that time the carrier has shown impressive resilience as it worked with its parent Republic to turn its fortunes around. But its seemingly non-cohesive network strategy could either be a blight on a potential sale, which could disrupt plans by Republic to monetise Frontier by 2H2013.