Excitement exuded by Allegiant Air a year ago over its then-impending service launch to Hawaii has been dampened by the realities of operating the market. Allegiant has admitted the dynamics have changed in the US-Hawaii market place since it opted to acquire Boeing 757s during 2009 to link its small market US destinations with Hawaii. Now the carrier is tempering its expectations for its expansion into Hawaii and reining in capacity as a means to bolster its performance from the US west coast to the Hawaiian islands.

Allegiant is likening its seasonal capacity management from the US to Hawaii to adjustments it regularly makes in its Florida markets to properly align its supply with demand. But it is unclear just how firm the airline’s commitment is to Hawaii as it has not assured that some routes undergoing a seasonal suspension will return, and has hinted its Hawaiian operations are likely to be smaller in scale than originally planned.

After a protracted process in gaining ETOPs certification for its six Boeing 757s, Allegiant introduced flights in Jun-2012 from its Las Vegas base and Fresno, California to Honolulu. Since that time the carrier has added seven additional destinations from the US to Honolulu – Bellingham, Eugene and Spokane, Washington; Boise, Idaho; Phoenix Mesa; and Santa Maria and Stockton, California. Other service launches included flights from Bellingham to Maui.

Allegiant’s service patterns in its Hawaii markets mirrored the carrier’s low frequency deployment strategy on the mainland, where about 60% of its routes are served approximately twice weekly. Its business strategy is built around offering low fare flights from small cities such as Boise to large leisure markets including Las Vegas and Orlando.

Presently, (19-May-2013 to 25-May-2013) most of Allegiant’s Hawaii markets feature roughly 230 one-way seats, according to schedules in Innovata. It has direct competition in Bellingham from Alaska Airlines, and Hawaiian Airlines in Las Vegas. Both US Airways and Hawaiian serve Honolulu from Phoenix Sky Harbor International airport.

The long process in gaining approval for over-water service for the 757s resulted in Allegiant having a smaller window for marketing, selling and promoting the new service to Hawaii. In some respects those circumstances made it tough to get an accurate gauge of the market dynamics, which led Allegiant to possibly mis-calculate the demand profile of some routes. It opted to suspend service between Monterrey, California and Hawaii before the route launch, citing weak demand for the pairing.

Now the carrier has revealed plans to seasonally cut service from Honolulu to Boise, Eugene, Phoenix, Spokane, Fresno, Stockton, and Santa Maria during Aug-2013 according to the Honolulu Star Advertiser.

Recently Allegiant SVP of network planning Jude Bricker candidly declared that, “Hawaii is weak – there is no doubt about it.” The weakness is driven by capacity increases from the US west coast between the time Allegiant opted to acquire larger-gauge, 223-seat 757s for service to Hawaii in 2009 and the market debut during 2012.

In Feb-2013 Hawaiian Airlines estimated that industry capacity from the US mainland to Hawaii (which is primarily concentrated in west coast markets) increased approximately 13% year-on-year during 3Q2012 and 4Q2012, explaining that typically the fourth quarter is a seasonally slower period that cannot easily absorb higher capacity levels.

Mr Bricker stated the capacity increases have put pressure on fares, which has resulted in Allegiant’s performance in Hawaii not being “as good as we had hoped”. Data from the US Department of Transportation show that Allegiant’s average load factor on services, with Honolulu International as the destination airport, was about 82% during 2012 after it introduced flights to Hawaii in June of that year. Its respectable loads coupled with Mr Bricker’s commentary show that Allegiant was likely trading in loads for yields driven likely in part by promotional fares for its new routes and by the overcapacity in the Hawaiian market place that led to price dilution.

After experiencing the realities of the US mainland-Hawaii market, Allegiant is now reassessing how its capacity is deployed. It plans to adjust capacity for peak travel times from the southern west coast to Hawaii, during the US summer period and during the winter from the Pacific northwest, which has strong demand during that time driven somewhat by Canadian passengers opting to travel from Bellingham, Spokane and Boise, said Mr Bricker.

The strategy is to create a counter-seasonal pattern between the US and Hawaii, said Mr Bricker, who stated that Allegiant believes that tactic should be effective in bolstering its Hawaiian performance.

Some of the seasonal capacity management is reflected in Allegiant’s one-way weekly seat increases between California and Hawaii beginning in Jun-2013. Allegiant is doubling capacity on service between Honolulu and Fresno, Santa Maria and Stockton. 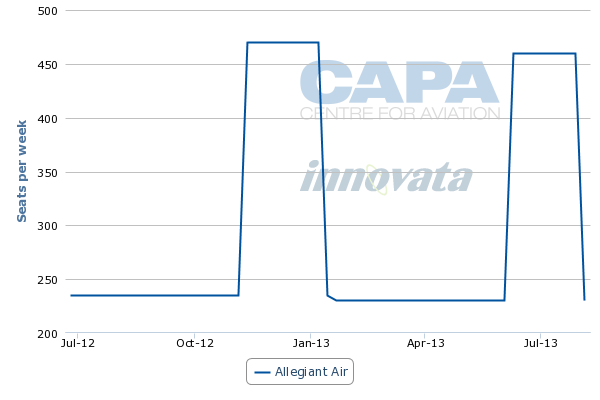 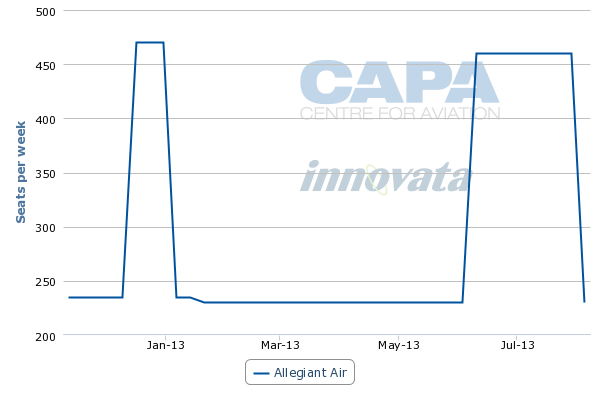 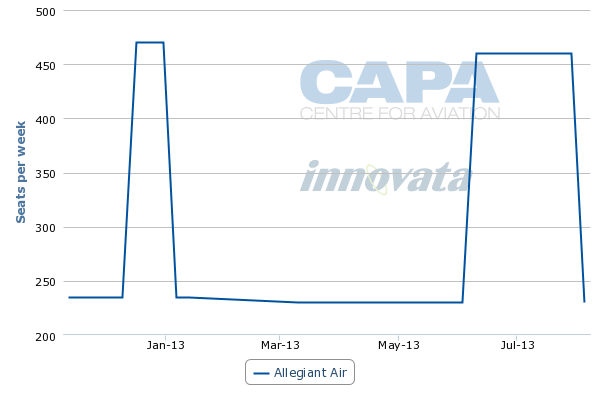 It is not certain if all the markets Allegiant is cutting on a seasonal basis in Aug-2013 will return as Mr Bricker remarked the carrier’s Hawaiian operations could be somewhat smaller than originally planned, and all six 757s may not be needed in trans-Pacific service.

Allegiant assures 757s can be re-deployed on mainland flights

Recent remarks from Allegiant president Andrew Levy for the analysts community to “stay tuned” for which Hawaiian markets return and when also indicate that not all of the current route pairings will remain intact.

Mr Levy believes that the 757s freed up by the smaller footprint in Hawaii could effectively be deployed on mainland routes where the carrier has determined the denser aircraft could drive higher profitability on some mainland routes than the current 166-seat MD80s that comprise the bulk of Allegiant’s fleet. The highest density routes Allegiant operates are from its Las Vegas and Orlando Sanford bases, according to scheduling data from Innovata, so the carrier could likely profitability operate some larger aircraft on routes from those markets without taking too much of a financial hit given the low ownership costs of its MD80s. 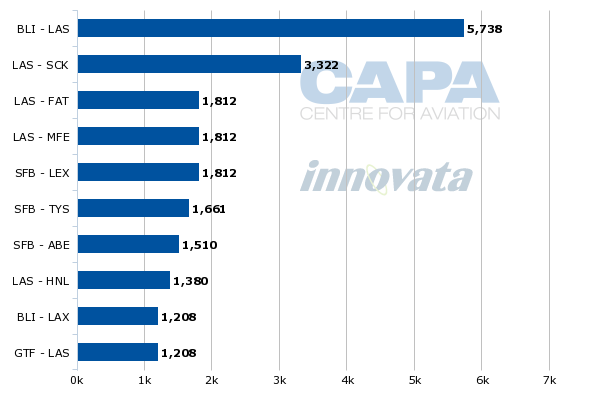 There remains an “outsized” interest in Allegiant’s Hawaiian operations, said Mr Levy, given the small percentage of the company’s overall revenue those markets generate. During 1Q2013 Hawaii accounted for 8% of Allegiant’s scheduled available seat miles and 2.3% of its departures. He also explained demand patterns in Hawaii are similar to trends Allegiant has encountered in its Florida markets since 2005, and stated the adjustments the carrier is making should enhance its profitability.

Even though Hawaii represents a minute portion of Allegiant’s network, the reality is the carrier perpetuated some of the attention it garnered on its new Hawaii service as it touted an analysis that indicated the potential for its Hawaiian routes to generate higher margins than its mainland flights.

But the results of that analysis have failed to materialise, which suggests that perhaps Allegiant misfired in assuming that it could replicate its low frequency, leisure traveller-focused model in the crowded and competitive Hawaiian market with larger aircraft. It has not completely lost the gamble as it heads into its second year of operations with a better knowledge of market dynamics and perhaps an improved understanding of how to create the hotel and entertainment packages in the Hawaiian market that accompany its mainland flights. But the optimism Allegiant once held that Hawaii could play a strategic role in its network has clearly waned, and perhaps its experience on trans-Pacific service to Hawaii will result in Allegiant assuming a more realistic view of replicating its model as it works towards launching near-international markets to Mexico within the next couple of years.