European airline shares fell again on Thursday (25-Feb-2010), as the wider market retreated over renewed concerns about Greece’s ability to manage its debt issues and disappointing economic data in the US. Energy shares also pushed wider markets lower, with a 2.3% drop in oil prices, to USD78.17.

Operating revenues fell by 19.1% year-on-year for the year, to EUR4,409 milllion, principally due to the sharp decline in transport revenues (passenger and cargo), following a generalised decline in demand, particularly within the business segment. Passenger revenue per ASK fell by 14.3%, to EUR5.05 cents.

Operating costs fell by 11.9%, helped by the significant fall in fuel prices. Other expenses were also reduced due to capacity adjustments and cost-saving initiatives put in place under the Contingency Plan. Unit costs fell by 6.3%, to EUR7.84 cents.

Iberia Chairman, Antonio Vazquez, stated he is confident the British Airways will be able to find a solution to its pension deficit issues and a merger between the two carriers will go ahead, with a definite deal to be signed in the “next few weeks”. British Airways (-1.2%) was also down yesterday.

TUI Travel (+2.2%) was meanwhile one of the few gainers on Thursday, after Carnival Cruises announced plans to lift prices after strong bookings for the 2010 holiday periods, suggesting improving demand for travel. Nine out of 21 broker notes rated TUI’s stocks as ‘Strong Buy’, while three rated it as ‘Buy’, according to What Investment and Digital Look.

Other stories available in today’s Europe Airline Daily include: 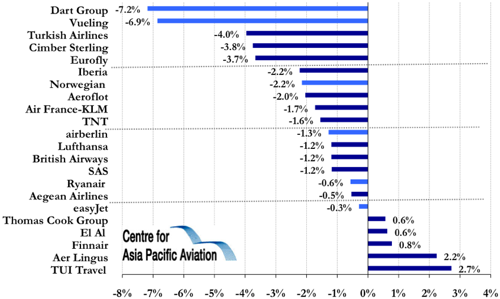