The share of premium seats as a portion of total travel is contracting, with premium seat share falling back towards the lows of early 2009 when it touched 7.5% of total traffic, according to airline industry body IATA. Given the continued growth in economy travel, IATA believes it is probable there has been a degree of substitution away from premium travel to economy, as businesses seek to cut cost in difficult economic conditions.

This changing seat class mix will undermine yields, and hence profitability, with IATA also warning that stagnant international trade and declining business confidence points to further weakness in business travel and a challenging profitability environment for airlines in 4Q2011. IATA has previously commented on the increasing movement towards premium economy travel, which IATA includes as part of the ‘economy’ category. “In recent months, that structural downshift has been joined by the start of a new cyclical downturn,” IATA said last month.

Cathay Pacific also announced it will progressively introduce a new economy class seat on the majority of its long-haul aircraft, also from Mar-2012. Cathay Pacific's move to invest in its product amid uncertainty in the market underscores the increasingly competitive marketplace in both the premium and economy segments and need to have product and infrastructure in place by the time traffic rebounds. 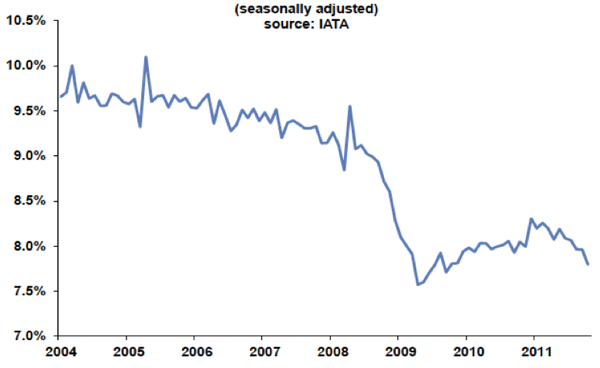 IATA reported the number of premium (first and business) passengers declined substantially in Oct-2011 compared to Sep-2011, when there was a recovery in premium seats to May-2011 levels. Premium levels rose only 0.1% year-on-year in Oct-2011, compared to the 6.7% increase in Sep-2011. This unsurprisingly had a negative impact on premium revenues. 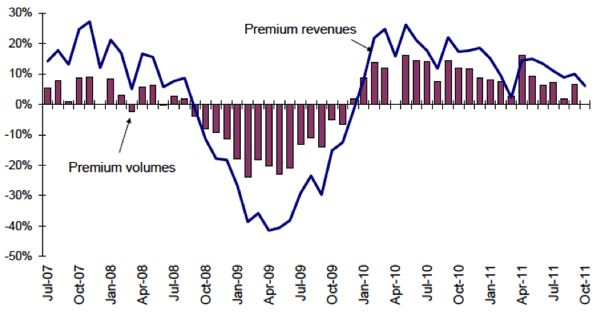 Economy (including premium economy) travel also witnessed a month-on-month decline in Oct-2011 but strengthened by 4% on a year-on-year basis. IATA noted that “this travel class has managed to maintain numbers above previous highs”. Compared to the end of 2010, there has been a 7.5% expansion in economic travel, compared to the marginal 0.3% expansion in the premium segment. 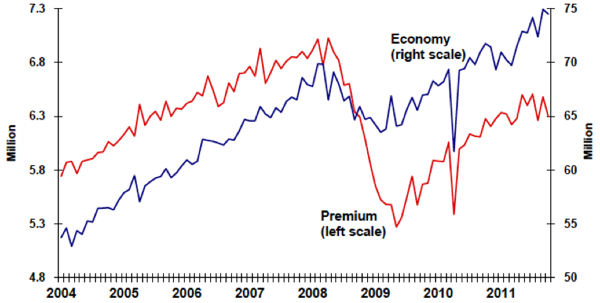 International trade growth rates have been declining for an extended period now and actual trade values have remained relatively flat for some months, IATA noted. This will have implications on business related travel, signalling a period of “flat or no growth”. Business confidence has also been trending downward, with Oct-2011 data indicating a “degree of stabilisation, but at low levels”. “The implications for premium travel, which tends to follow the index by a matter of months, is a flattening in growth at best, with the potential for some decline,” IATA said. 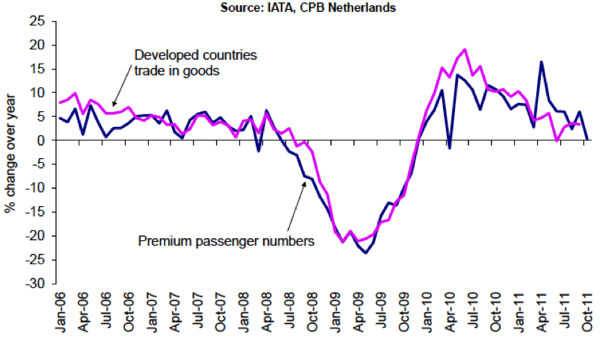 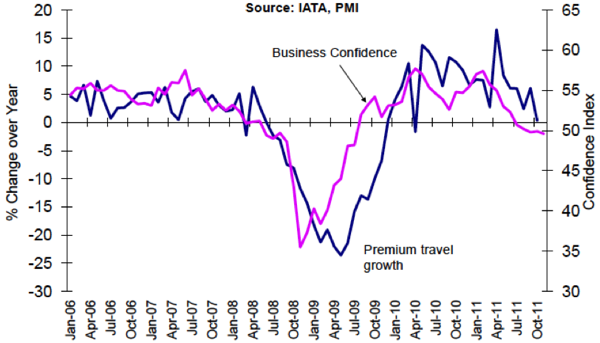 The Conference Board China Center at the end of last month reported a "modest" increase in the Leading Economic Index (LEI) for the euro zone but noted that it was "not enough to pull it out of recession territory, though it does suggest that the possible contraction in economic activity may be short and shallow". The Conference Board added that "weak confidence and nervous financial markets can still drag the economy into a deeper contraction if policy responses are not appropriate and adequate".

In China The Conference Board resident economist Andrew Polk noted there is a rising risk of a "more substantive slowdown in China’s economic growth than anticipated" amid deteriorating external conditions and domestic real estate tightening. "This is evidenced by the decline of the LEI for China coupled with the slower growth of the coincident economic index," he added. Consumer expectations continued to decline in Oct-2011, with the manufacturing and export indicators also contributing to the slight drop in the LEI in Oct-2011, The Conference Board noted. In Japan, The Conference Board believes that while "near term risks to economic growth remain, economic activity should continue increasing in the coming months".

The situation in the US is also improving. The Conference Board noted that consumer confidence improved in the US in Nov-2011 and "bounced back to levels last seen during the summer". It continued: "Consumers' assessment of current conditions finally improved, after six months of steady declines. Consumers' apprehension regarding the short-term outlook for business conditions, jobs and income prospects eased considerably". The Conference Board economist Ataman Ozyildirim separately noted that based on Oct-2011 data, "the risk of an economic downturn has receded".

The primary sources of the decline in premium travel in Oct-2011 were the 'within Europe' and North Atlantic routes, both key routes, according to IATA. Within Europe, premium travel went from year-on-year growth of 3.0% in Sep-2011 to -3.3% in Oct-2011, and the North Atlantic from 4.9% to -1.5% respectively. "It appears that the conditions in the economic and financial markets are now having an impact on premium traffic flows after showing growth throughout the year until Oct-2011," IATA said. This prompted IATA to comment that “October can be marked as the first sign of clear weakness”. 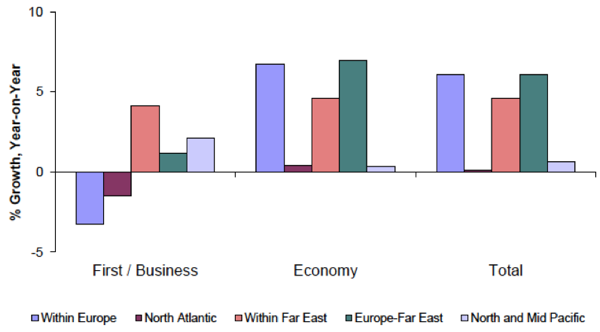 Similar to the situation in the ‘within Europe’ market, the North Atlantic saw a decline in growth in Oct-2011 after continued strong growth in previous months, which “could be an indicator of further weakening in 2012”, IATA said. Europe-Far East also saw a decline in premium passenger travel, with growth of only 1.2% in Oct-2011. However, within the Far-East premium travel remained strong month-on-month, with year to date growth remaining in the double digits, at 10.4%. The African markets have also shown positive performance in Oct-2011, with economies in this region continuing to show good growth, IATA noted. 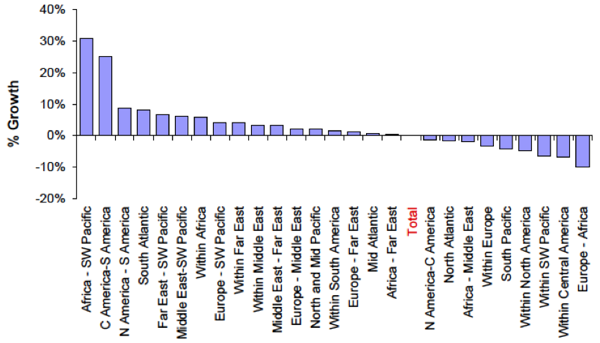 The first Cathay aircraft featuring the seats will enter service in Mar-2012 on services to Sydney and Toronto initially. A total of 36 777-300ERs and 26 A330-300s will be fitted with the seats by Dec-2013. Cathay Pacific's long-haul economies were previously retrofitted in 2006 with the installation of fixed-back shell seats in which the seat cushion moved forward and the back padding slightly reclined. The idea behind the concept was that passengers could have a reclining feel without infringing on the space in the row behind them. However, the carrier received many complaints that the seats did not offer a proper recline.

Cathay Pacific also provided details of the planned premium economy seats, which will have a seat pitch of 38", 6" more than economy class, with a seat width of 19.3" and a recline of 8". Between 26 and 34 seats will be installed per aircraft. The seating will be installed in a 2-4-2 configuration on 777-300ER and 747-400 equipment and in a 2-3-2 configuration on A330-300 and A340-300 aircraft. The new Premium economy Class cabin will be installed on all the carrier's long-haul aircraft including 777-300ERs, 747-400s, A330-300s and A340-300s. The first 777-300ER and A330-300 featuring premium economy class will enter into service in Mar-2012 and will be available for sale in 1Q2012 for services departing from Apr-2012 onwards. The airline plans to have 87 aircraft fitted with the product by the end of 2013. Premium economy will initially be featured on the Sydney, Toronto and Vancouver and New York routes, followed by London, Los Angeles, San Francisco, continental Europe and other long-haul routes as the number of aircraft fitted with the product increases. 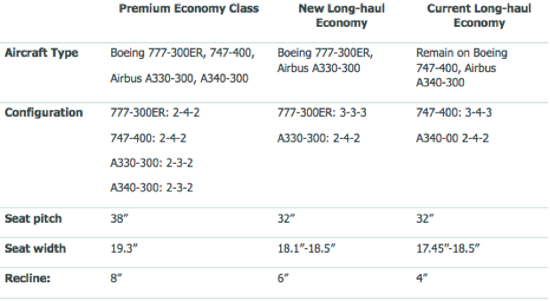 The carrier confirmed plans to introduce a premium economy product on 29-Aug-2011. Mr Slosar, at the time, said the product would provide passengers “a real upgrade over economy” and that they would really get a great product for the additional cost. “The seat will be more like a regional business class seat. We’ll have great recline and plenty of leg space," he said. Mr Slosar said the airline was now convinced that premium economy was becoming a standard product everywhere. "And certainly, as a standard product, Cathay Pacific will want to offer it and we’ll want to do a really good job of it. Starting second quarter next year we will offer a premium economy product in our aircraft.”

The launch of the new economy cabins follows the carrier's decision to invest HKD1 billion (USD129 million) to upgrade its long-haul business class cabins in Dec-2010, with implementation of the product occurring from Mar-2011. The new wing-back chair business class product is configured at an angle and converts into a bed that the carrier claims is "one of the longest and widest provided on any commercial airline". The leather-covered seats can stretch to 1.9m beds, 10cm more than current units. 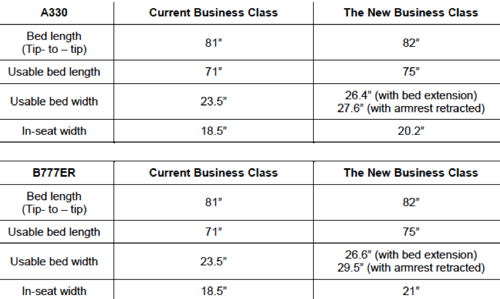 Amid weakening premium traffic demand and revenues, airlines around the world are taking action to mitigate the potentially devastating impact on yields, revenues and, hence, profitability. Capacity cutbacks and reallocation of capacity to low-cost subsidiaries (for example, Iberia with Iberia Express and Lufthansa with Germanwings) are two strategies which are being implemented. 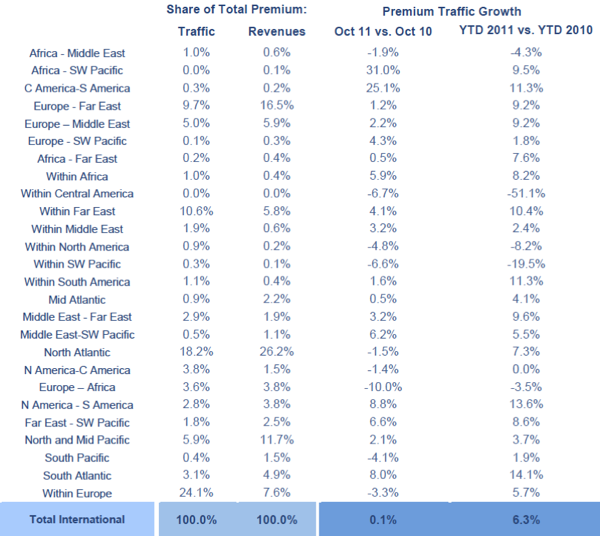