GOL reports 25% margin in 4Q on large drop in net

Celebrating its 10th anniversary on 15-Jan, GOL reported a 15.6% jump in net revenues to R$1,869.8m in the fourth quarter compared with 4Q2009 and a 4.5% increase on third quarter results. However, the company reported a 66.8% drop in net income to BRL132.2 million. It did not release full-year statistics. 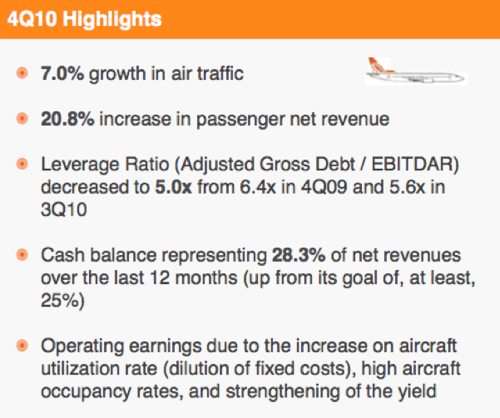 The company cited continued strong demand driving a 12.9% increase in yields while maintaining a 71.1% load factor. In its first 10 years of operations Founder and CEO Constantino de Oliveira, Junior said the results put GOL among the most profitable carriers in the world, something management expects to continue this year. He also reported during Wednesday’s conference call that the Brazilian aviation market was exceptionally healthy having grown 23.5%.

Analysts again expressed doubt and concern over the aviation infrastructure in the country and Mr Oliveira tried to assuage concerns noting three key upcoming events: the Confederation Cup in 2013, the World Cup in 2014 and the Olympics in 2016, and adding the government has already commenced three major infrastructure products.

He also suggested analysts should think conservatively in 2011, especially about yields given the rising fuel prices. “In real terms we need to continue to focus on efficiency and flying more hours,” he said. “On the other hand, we have a very fuel efficient fleet so we will continue to focus on cost ex fuel and that will give us the flexibility to sail through challenging times.”

CFO Leonardo Pereira noted the success of fare increases in each month of the fourth quarter ahead of fuel purchases. In response to a question on what the airline is doing to raise market share, he responded, reminding analysts it was more prudent to focus on profitability than share.

Mr Olivera agreed. “What’s the point having a 15% market share or 60%, if we are not profitable and if there is no return to shareholders,” he said. “We need to focus on efficiency. We have the best position in the main airports of Brazil and the best coverage in terms of network. After that the rest should fall into place. The bottom line is we have to be profitable.”

Echoing his North American peers, he indicated it was premature to discuss what the company would do if there is more civil unrest in the world and fuel prices keep rising, pointing the company’s record of profitability.

With 35-40% of passengers connecting in the Sao Paulo terminal area, GOL is looking to spread that to other airports given the consistent congestion problems in the airspace. Mr Olivera pointed to the company’s growth at Rio as an example. 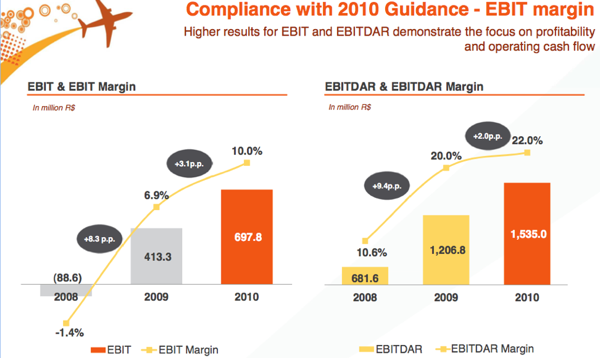 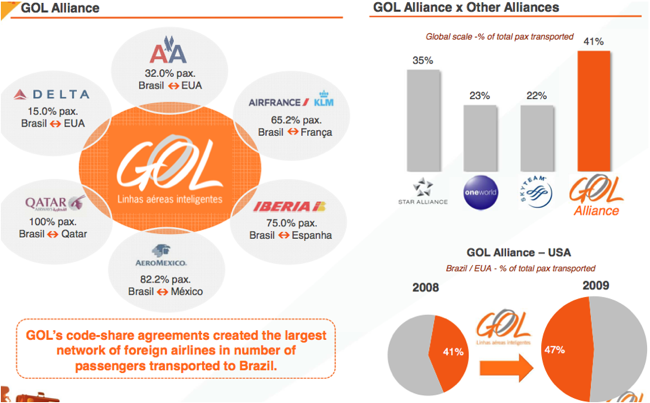 Ancillary revenues continued to dropped by 19.1%, despite gains in cargo and buy on board, between the fourth quarters of 2009 and 2009 which the company attributed to a drop in change and cancellation fees. Total ancillary revenues reached BRL171.9m and accounted for 9.2% of revenues. Cargo revenue climbed 50% over 4Q2009 and amounted to 4% of net revenue in the quarter, a full percentage point higher that in the 2009 period. In addition, its buy on board products, launched in June 2009 is now available on 84 flights, double that at launch. GOL is now planning to expand it further 50% of total daily flights by the end of this year.

The company expects Brazilian GDP to rise between 4-5% this year resulting in a 10-15% RPK demand growth. GOL plans to increase capacity – on utilisation only – to between 48 and 51.5 billion ASKs. Guidance also includes yields rising to between 19.5-21 cents while CASM ex fuel will be at 8.9 to 8.5 cents. It also expects to repeat is good operating margin results this year coming it between 11-14%. 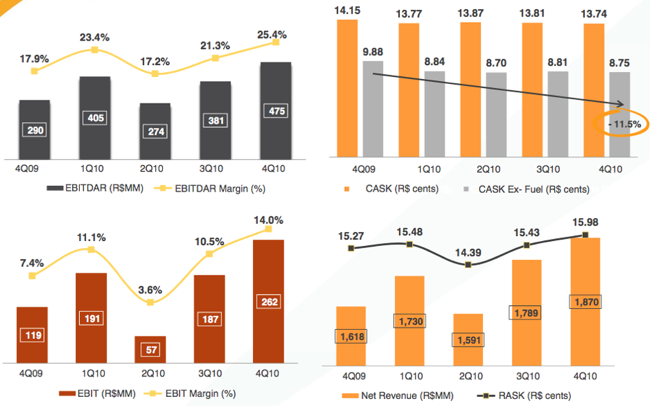 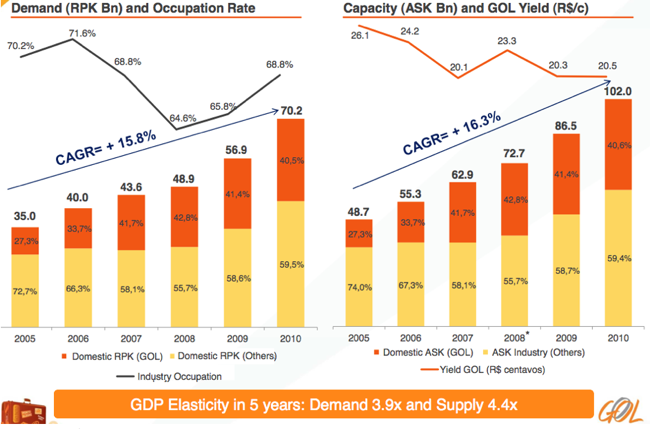