Flybe is reborn with a return to profit after three years of losses. Now to consolidate

Announcing his first set of annual results as Flybe CEO, Saad Hammad declared that the airline had been "reborn" in FY2014. It was certainly a year of great significance in Flybe's 35 year history. The company returned to profit after three years of losses and successfully raised GBP150 million in fresh equity, avoiding what was starting to look like a looming bankruptcy and buying more time to complete its restructuring.

The return to profit was built on network rationalisation and a seat capacity reduction in the core Flybe UK airline. This was accompanied by a significant headcount reduction which led to lower costs. Load factors were driven up by the capacity cut and lower fares, leading to higher revenues per seat and a slight increase in total revenues. Losses were also reduced at Flybe Finland, the joint venture with Finnair.

Importantly, too, Mr Hammad and the rest of the new management team seem to be bringing about a cultural change in Flybe, with a brand re-launch and his talk of 'Purple Power'.

Losses in the previous three years had been on a deteriorating trend and, if unchecked, this would have threatened the company's existence. In addition to reversing the trend of losses, FY2014 also featured a strengthening of Flybe's balance sheet. In FY2012 and FY2013, Flybe's cash levels fell at an annual rate of GBP20 million or more to sit at just GBP23 million at the end of FY2013, equivalent to only 14 days of revenues.

A GBP150 million issue of new equity capital in Mar-2014 led to an improvement in the year end cash balance (before restricted cash) to GBP178 million at the end of FY2014, equivalent to 105 days of revenues. A net debt balance of GBP98 million at the end of the previous year was transformed into a net cash balance of GBP76 million (excluding restricted cash).

Flybe's cash position was also helped by the sale of Gatwick slots to easyJet, the deferral of aircraft deliveries and the sale and leaseback of spares.

It is not yet generating sufficient operating cash flow to fund future fleet growth, especially as it plans to reduce the reliance on operating leases as the main form of aircraft funding, but the capital increase has now bought Flybe time to make further progress with its restructuring and profit improvement.

The Flybe Group's consolidated revenues grew by 1.0% to GBP621 million. Passenger revenues in Flybe UK increased by just 0.4%, but revenues from contract flying increased by 27% and other revenues by 1%.

Operating costs were reduced by 4.2% year on year in FY2014, although the comparison with FY2013 is distorted by a lower level of restructuring and surplus capacity costs. Excluding these items, adjusted operating costs fell by 2.5%, but this is still a good performance in light of the increase in revenues and reflects the success of the cost restructuring programme.

Flybe achieved its planned total of GBP47 million in cost savings under the different elements of its cost reduction programme in FY2014. It plans to increase this to a cumulative GBP71 million in FY2015.

Flybe UK remains the key to the group results

The group's consolidated revenues continue to be dominated by Flybe UK and it is also the main driver of the improved group profits, although both Flybe Finland (the joint venture in which Flybe has a 60% share and Finnair 40%) and the MRO division also recorded improved results.

Flybe UK's pre-tax result before restructuring/surplus capacity costs turned from a GBP17 million loss in FY2013 to a GBP4 million profit in FY2014. The MRO segment increased its pre-tax profit from GBP0.7 million to GBP2.2 million and the group's share of Flybe Finland's result was a loss of GBP0.8 million, versus a loss of GBP3.5 million in the previous year. Flybe Finland's two segments, white label and scheduled flying, both improved their results, although scheduled continued to make a loss. 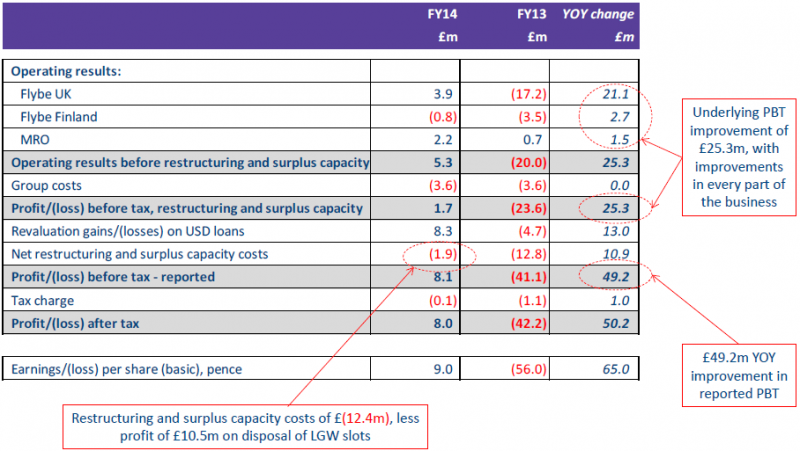 Flybe UK comprises the core Flybe airline, operating under its own brand, in addition to contract flying that it carries out for Brussels Airlines. This latter activity generated revenues of GBP16 million in FY2014, an increase of 29%, and involves four crewed Q400 turboprops. These arrangements expired in Apr-2014 (two aircraft) with the remaining two expiring in Oct-2014. Flybe is actively seeking new airline customers for its 'white label' contract flying business.

The strong growth of Flybe UK's contract flying and other revenues meant that the segment's total revenues increased by 1.7%, or GBP10 million. Its operating costs fell by a similar amount, leading to the improved profitability.

The number of aircraft in the Flybe UK fleet remained stable at 70 over the financial year, although two new Embraer E175 regional jets joined the fleet and two Bombardier Q400 turboprops were sold. There were no changes in the Flybe Finland fleet of 28 aircraft and the total fleet under management consisted of 98 aircraft at 31-Mar-2014 (the return of a leased STR42 by Flybe Finland reduced this to 97 aircraft at 10-Jun-2014). The average age of the fleet was 5.9 years.

Ten of the E195 aircraft are currently grounded due to lack of demand and Flybe is talking to other airlines about their possible use under white label contract flying or sub-lease arrangements. Flybe expects to return five E195 jets to lessors in FY2015.

Flybe still has 24 outstanding E175 orders, out of a total of 35 ordered in 2010, with deliveries scheduled between FY2016 and FY2020 after agreeing a number of deferrals with Embraer. Flybe is continuing to discuss this delivery schedule with Embraer and is also talking with lessors on the early hand-back of grounded aircraft.

Some 90% of the total fleet is under operating lease, partly because Flybe's balance sheet has not historically been strong enough to finance on-balance sheet funding methods. CFO Andrew Knuckey (who will leave the company in Aug-2014) told analysts at a presentation to discuss the FY2014 results that the group would now use its strengthened balance sheet to increase the proportion of owned aircraft over time towards a 50/50 situation, thereby lowering the cost of aircraft ownership. Since the end of FY2014, four Q400s on operating leases have been acquired upon expiry of their lease. 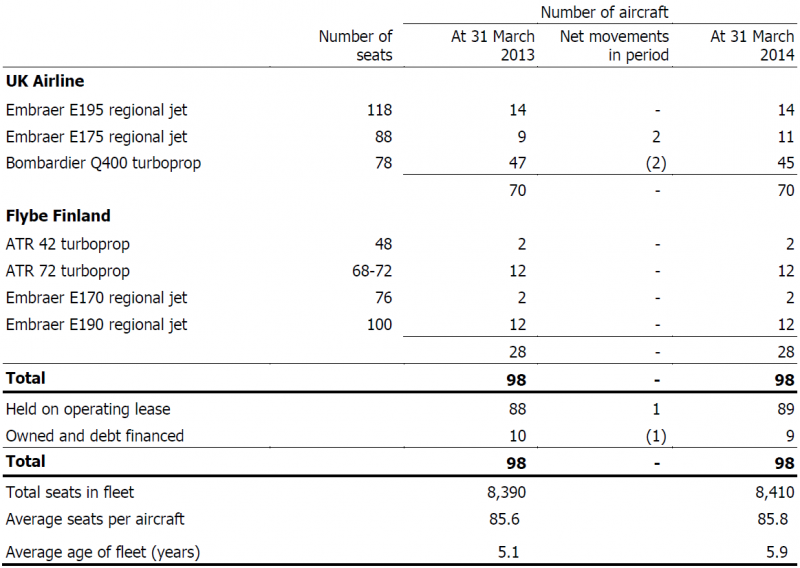 No single person can claim the credit for a turnaround, but Mr Hammad has certainly had a major impact since joining Flybe in Aug-2013. He has replaced much of the previous senior management team and brought a new and sharper focus to the airline.

He is fond of lists: 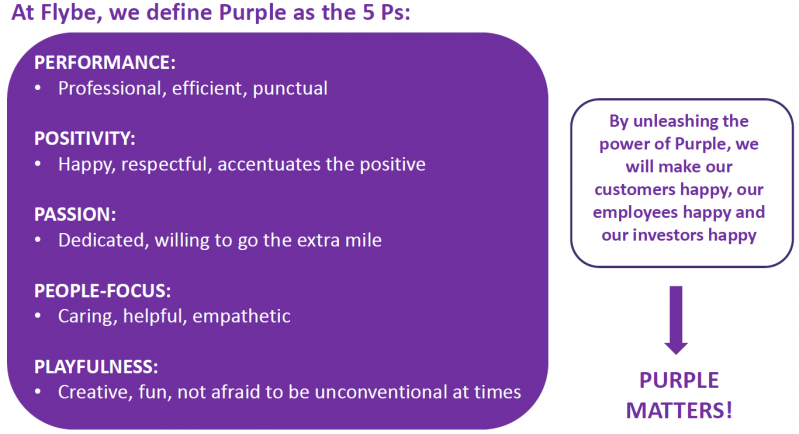 Flybe has survived its rebirth, but infancy can be a dangerous time

Flybe avoided what was becoming an increasingly certain death in FY2014 and started to build a platform for future growth. It would be churlish not to allow Mr Hammad's description of this as a rebirth. Although capacity cuts will prevail in 1HFY2015, he has even presided over the announcement of new routes from London City and Southend airports.

Nevertheless, it continues to face significant challenges in areas such as unit costs and load factors. For example, Flybe's operating cost per seat of around GBP54 is not much less than that of easyJet, in spite of Flybe's average sector length being well under half that of easyJet. Moreover, its load factor is 20 ppts lower than easyJet's.

A new-born in the airline industry requires much care and attention – and a good dose of luck – if it is to survive its infancy.