In 2017 the Lufthansa Group has reclaimed from Ryanair the title of Europe's biggest airline group by passenger numbers.

Lufthansa's 18.6% increase, to 130 million passengers, was fuelled by its Jan-2017 acquisition of Brussels Airlines and strong growth by Eurowings (which benefited from airberlin's demise). Wizz Air was the fastest-growing among the top 20 groups, followed by a resurgent TAP Air Portugal.

Ryanair (whose growth is, by contrast with Lufthansa's, organic) would have kept the number one position – won for the first time in 2016 – if it had not trimmed its winter growth to address operational problems. Even then, the Irish LCC still grew at 10.3%, to 128.8 million passengers, and comfortably remained Europe's biggest individual airline.

This CAPA report ranks Europe's top 20 airline groups by passenger numbers in 2017, and also includes a ranking of the top 20 individual airline brands.

LCCs and leisure groups gain significance; Alitalia the only top 20 group that is shrinking

LCCs account for six of Europe's top 11 airline groups, and leisure groups account for a further two of the top 14.

The tour operator TUI Group does not publish its airline passenger numbers and so, it was not included in CAPA's top 20 for 2016, but CAPA estimates that it carried of the order of 23 million, and it is now added to the 2017 list at number 12.

Alitalia, which entered administration in May-2017, has not reported a 2017 figure, but OAG data show a 2.4% drop in seat numbers. If its traffic followed this trend, Alitalia carried an estimated 22 million passengers – the only top 20 group to experience a decline.

Note that airberlin has dropped out of the ranking, since it ceased operations in Oct-2017. 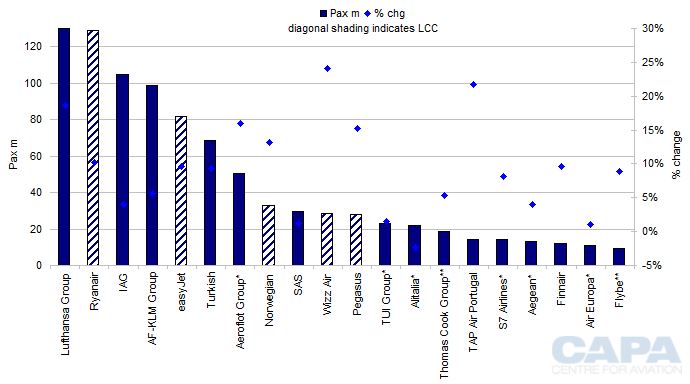 Jet2.com leads chasing pack of airlines outside the top 20

There were eight airlines/airline groups just outside the top 20, with passenger numbers in the range of 4 million to 9 million in 2017 (many based on estimated figures).

Five of these were growing at strong double-digit rates in 2017, led by Jet2.com, with 38.7% growth to 9.2 million passengers, driven by its new Stansted base. The Spanish LCC Volotea does not report passenger figures, but grew seat numbers by 25% (source: OAG).

In addition, UTair Aviation grew passenger numbers by 9.6%, and Icelandair by 9.8%.

By contrast Virgin Atlantic cut its seat numbers by 4.6%. 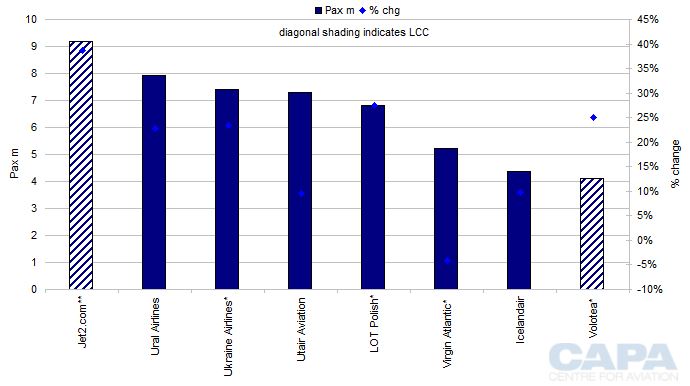 Focusing on the top seven groups and their individual airline brands – they each tell a slightly different story.

The Lufthansa Group's main growth engine was its point-to-point airlines division, which grew passenger numbers by 77.0%, to 32.6 million, thanks to the addition of Brussels Airlines to Eurowings in this division. Like for like, Eurowings grew by 29.0% to 23.5 million, and Brussels Airlines by 17.2% to 9.1 million.

IAG has not reported the breakdown of its 2017 passenger numbers into its individual airlines, but CAPA estimates are shown in the graph below.

The highest growth among IAG airlines is likely to have been achieved by the LCC Vueling, estimated by CAPA at 8% (to an estimated 30 million passengers), while British Airways remains the group's largest airline, with approximately 45 million passengers (growth of only 1.8%). Estimated 2017 traffic is almost 19 million passengers for Iberia, and 11 million for Aer Lingus.

Unlike the leading Western European legacy groups, the only Aeroflot Group airline not to enjoy double-digit growth in 2017 was its LCC Pobeda (estimated 2% increase to 4.5 million passengers). Aeroflot itself grew by 13%, to 32.8 million passengers.

Ryanair and easyJet operate as single airline brands, each of which has more passengers than the individual airline brands of the other leading groups. 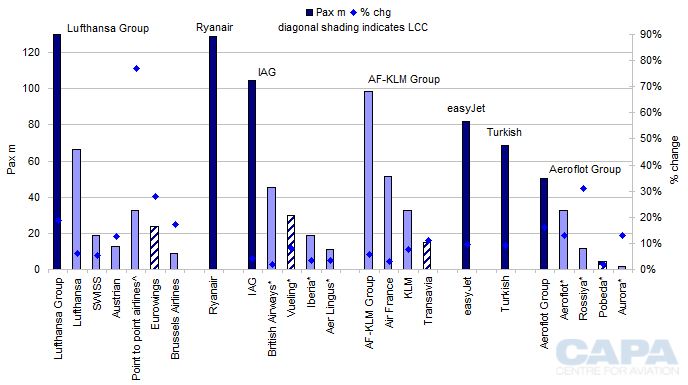 Although Ryanair lost the top spot among European airline groups, it remained the biggest individual airline brand by passenger numbers in 2017. 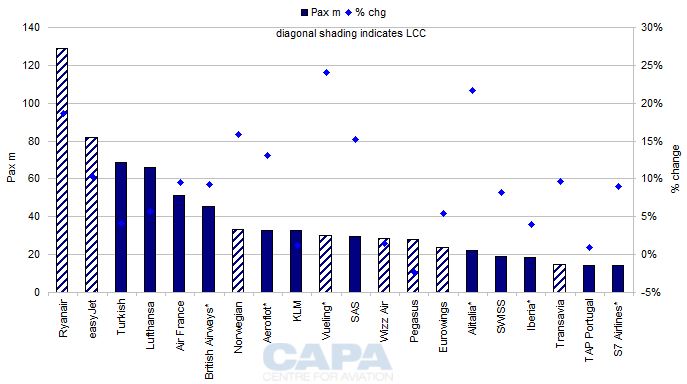 Ryanair is very unlikely to relinquish the top spot among individual airlines in Europe any time soon, even after easyJet adds assets acquired from airberlin, from Jan-2018.