Secretary-General, John Hanlon, commented, “these figures show clearly how ELFAA members are bucking the trend in the aviation sector when it comes to passenger numbers”. He added, “it also demonstrates beyond any doubt that the economic crisis need not be an excuse for airlines to go cap in hand to governments pleading for unjust cash injections.”

As previously reported by CAPA, Europe’s three largest LCCs - Ryanair, easyjet and non-ELFAA member, Air Berlin - handled over 139 million passengers in 2009 between them, a 7.7% year-on-year increase, despite 2009 being one of the most challenging years ever for the European aviation industry.

The combined figure of the three LCCs is a massive 80% increase from 2005 levels. The growth of the three major European LCCs is even more impressive considering the situation facing the European economy last year and the plight of the region's network carriers.

In contrast, Association for European Airlines (AEA), which brings together 36 European established scheduled network carriers, stated it handled 20 million fewer passengers in 2009, with passenger numbers down 5.8% to just below 326 million. This reduction, according to AEA, “easily” surpasses the previous record annual traffic loss, of 14 million in 2002, following September 11.

ELFAA members also led the way in job creation, employing an additional 3,000 permanent employees in Europe last year – a 12.5% increase on 2008, prompting EFLAA to comment, “this further underscores the fact that the low-fares sector is well on the way to becoming the principal player in European aviation”, said ELFAA. AEA stated its airlines provide approximately 394,200 direct jobs - a figure most airline managements are actively attempting to reduce.

The contrasting traffic results highlight the massive structural change occurring in the European aviation market. This has been provoked by the economic upheaval and the growing customer preference for low cost travel. Eating into the market share of Europe’s network carriers, it reduces intra-Europe yields, resulting in unsustainable short-haul losses for the network carriers.

In the traditionally large premium markets, airlines are reacting to the irreversible changes in short-haul markets, with Aer Lingus, Air France, Alitalia, Austrian, bmi, British Airways, Iberia and Lufthansa, among others, announcing substantial adjustments to their products and strategies in recent months.

Among the listed European LCCs, shares in Ryanair, Vueling and easyJet gained yesterday (up 3.1%, 2.9% and 2.7%, respectively), Norwegian’s share price remained unchanged, and Air Berlin and Dart Group’s shares lost ground (down 0.8% and 2.3%, respectively). 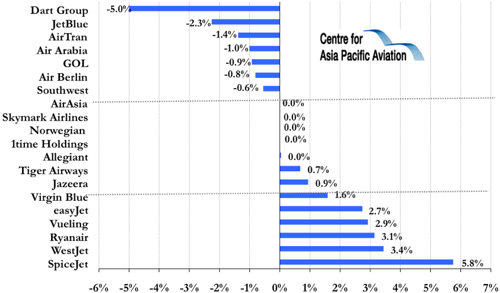