IAG CEO Willie Walsh told the Airlines for Europe summit in Mar-2019 that European ATC is "inefficient and starved of proper resources and staffing". Wizz Air CEO Jozsef Varadi has characterised European air traffic control as "bleeding from every wound" and he does not expect much improvement this summer after a spike in delays last year.

Also speaking at the A4E event, EUROCONTROL head Eamonn Brennan said that air traffic capacity in Europe has a long history of being saved by crises, which relieved pressure by lowering demand each time capacity appeared no longer able to cope. He highlighted the current pressures on air traffic management capacity by saying "unless something big happens, this time we're heading for the wall".

Europe's air space management challenges include both strategic considerations of the capacity needed to meet ever growing demand and the constraints on growth resulting from operational issues such as air traffic control strikes.

The consequences of the mismatch between demand and air space capacity are significant. Not only does this lead to growing en route delays to flights (a much bigger source of delay than airport delays), but it also makes a significant contribution to unnecessary emissions of carbon dioxide.

In 2018 the airspace over member countries of Network Manager EUROCONTROL accommodated a record 11 million flights, an increase of 3.8% year-on-year.

On average, there were 1.73 minutes of en route delays per flight in 2018, compared with a Single European Sky performance target of 0.5 minutes.

EUROCONTROL forecasts that the number of flights will increase to 16.2 million in 2040 under its central scenario.

Relative to 2017, the number of flights in 2024 is forecast to be 53% higher, or an average of 1.9% pa. This means an additional 15k flights per day. The greatest additional numbers of flights are forecast in Turkey, Germany, France and the UK (see chart below). 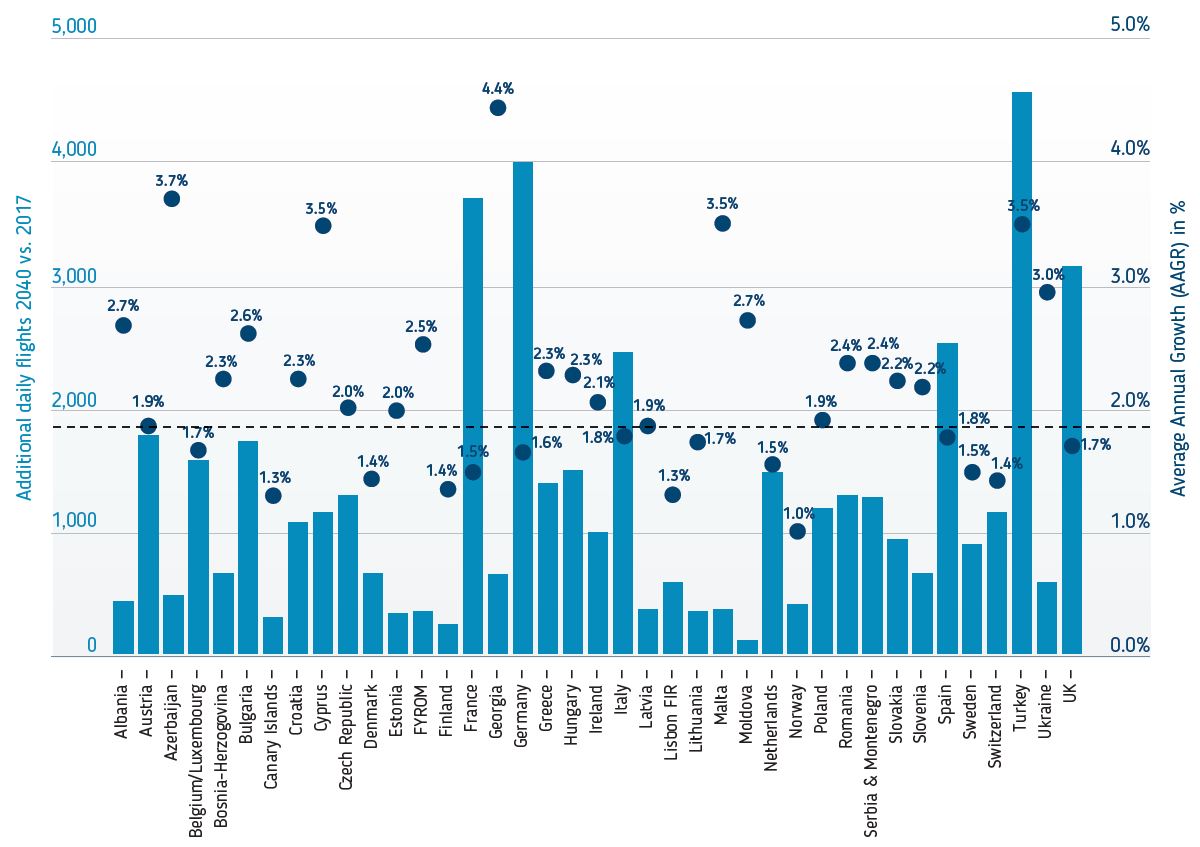 Although the average growth rate of 1.9% pa is slower than in the 20 years from 1998 to 2008, when the number of flights doubled (average growth of 3.5% pa), it will increase the pressure on European air traffic management (ATM) capacity.

En route delays are much greater than airport delays

The spike in delays in 2018 is a stark illustration of how heavy this pressure has already become. In fact, the system has been close to the Single European Sky delay target of 0.5 minutes per flight only once in the past decade.

Air space capacity is not meeting demand due to inefficiencies

The sharp increase in en route delays since 2013 has been the result of the opening of fewer sectors than planned, so that delivered ATM capacity has not matched the average growth in flights of 3% pa.

This has been a function of a range of factors, including recruitment, unexpected changes in demand and the sometimes suboptimal deployment of staff. The impact was compounded by a lack of effective mitigation action in some area control centres. Moreover, weather and strikes by air traffic control (ATC) staff have been bigger causes of network disruption since 2013.

Airspace sector efficiency is restricted by national borders, with minimal positive contribution from the functional airspace blocks that were designed to dissolve national borders within each block. Moreover, technological development has been slow and EU finding has not been well targeted.

2018 delays could have been even worse

EUROCONTROL, as Network Manager, adopted some mitigation measures from late 2017 in cooperation with national Air Navigation Service Providers (ANSPs). These included rerouting flights into airspace with some capacity and required increased levels of cooperation not seen previously, involving the network manager, ANSPs and aircraft operators.

According to EUROCONTROL, such measures saved more than five million minutes of delay, so the 2018 figure of 19.1 million could have been significantly worse. EUROCONTROL expects similar measures, together with improvements based on analysis of their impact last year, to be employed again in summer 2019.

In addition, ANSPs are implementing recruitment and training plans, but it will take at least three years from the start of recruitment to validation, so that this action will not be fully effective before 2021 or 2022.

More specifically, EUROCONTROL has a short term action plan for 2019-2020 to mitigate capacity shortages and to add the potential creation of incremental capacity. Airlines and ANSPs cooperated with the Network Manager to launch the plan.

Concerning the constraints on growth caused by air traffic control strikes, there is a clear need for measures to limit and mitigate the impact of such industrial action.

For example, Airlines for Europe has proposed measures such as a commitment to go to third party arbitration prior to calling a strike, and greater certainty over alternative air space provision in the event of a strike.

Looking further ahead, solutions will come from a multilateral, collaborative approach involving cooperation between states and air navigation service providers. There will also need to be faster and more flexible processes to recruit and train air traffic controllers.

The European Commission has commissioned an airspace architecture study from the SESAR Joint Undertaking to propose an architecture to ensure efficient, safe and seamless accommodation of all air traffic by 2035.

In addition, the use of new technology and techniques to optimise air space configuration is increasing the effective capacity of air traffic management. In Europe, this means continuing to drive through the initiatives undertaken within the Single European Sky project.

There are strong incentives to solve Europe's air space problems

The growing flight delays caused by the shortfall in air space capacity in Europe provides a strong incentive for all involved to work together to alleviate the problems.

In 2018 334 million passengers were affected by delays and cancellations, according to EUROCONTROL. If unchecked, delays could have a negative impact on demand for air travel – for example, if increased delays make a weekend trip unattractive.

According to easyJet CEO Johan Lundgren, analysis of the LCC's 10 busiest routes showed that flying direct and at optimal vertical flight trajectories would lead to an 18% carbon emissions reduction.

As noted by Lufthansa Group CEO, the environmental concerns should ensure that solving Europe's ATC challenges becomes a higher priority for politicians.

A system that relies on a crisis to lower demand and alleviate a capacity crunch is unsustainable.

Political will, underpinned by priorities determined by the electorate, will be the most important factor in solving Europe's air space capacity problems.

See related report: The challenges of aviation growth: get better at self promotion