Among Europe's top dozen airline groups by weekly seats there are five LCCs.

Ryanair is at the top of the list, which also includes easyJet, Wizz Air, Pegasus Airlines and Jet2.com. All but one of these five LCCs are operating more than 100% of what was their seat capacity in the equivalent week of 2019, while only one FSC group has risen above this threshold.

Europe's capacity recovery as a percentage of 2019 levels remains on the plateau it has occupied since the last week of May-2022 – for LCCs and FSCs alike. Nevertheless, low cost airlines have made structural gains in seat share since before the COVID-19 pandemic.

In the week commencing 1-Aug-2022, total European seat capacity is scheduled to be 32.1 million, according to OAG schedules and CAPA seat configurations.

This week's total seat capacity for Europe is split between 7.5 million domestic seats, versus 7.8 million in the equivalent week of 2019; and 24.6 million international seats, versus 28.9 million.

Europe's domestic seats are down -4.1% versus 2019's, compared with last week's -5.4%. This is the strongest weekly performance for the domestic market since the start of the pandemic.

Europe has moved up from fifth to fourth place in the ranking of regions measured by seats as a percentage of 2019 levels this week.

Asia Pacific, Latin America and Europe have taken upward steps in the trend this week, whereas Africa and Middle East have taken downward steps. 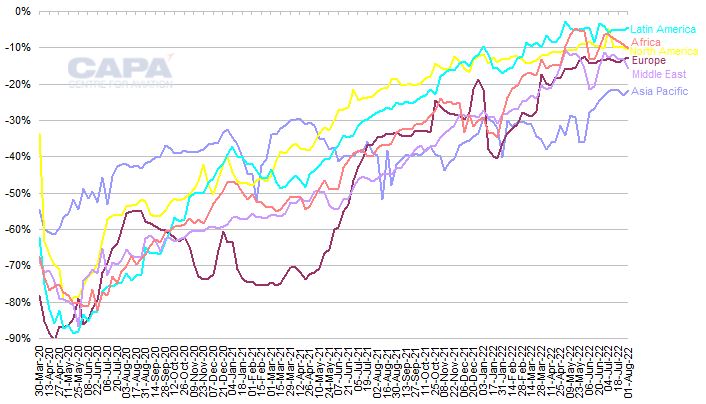 As has been the case for most of the COVID-19 pandemic recovery phase over the past 12 months or so, low cost airlines are leading the capacity recovery.

Ryanair is the biggest European airline group by weekly seat capacity in the week of 1-Aug-2022, with 3.9 million seats. This is 116% of its seat count in the equivalent week of 2019.

Lufthansa Group is number two by weekly capacity but it has only 81% of its 2019 capacity level this week, while third-ranked IAG is at only 85% (both of them below the Europe-wide level of 87%).

Fourth-placed Turkish Airlines and fifth-ranked Air France-KLM are the leading legacy groups measured by their weekly capacity as a percentage of the equivalent week of 2019: Turkish is on 110%, and Air France-KLM is on 93%.

In addition to the LCC Ryanair and FSC Turkish Airlines, the only other leading European airline groups that are operating more than 100% of 2019 capacity levels are all LCCs.

EasyJet is the only leading LCC group not exceeding 100% of 2019 capacity levels, but at 90% it is above the overall European average (and ahead of Lufthansa Group and IAG).

LCC recovery is helped by their focus on intra-Europe …

The faster recovery of LCC capacity compared with FSC capacity has been aided by the LCCs' focus on intra-Europe.

The intra-Europe market is ahead of the total Europe market, having reached 90% of 2019 capacity levels in the week of 1-Aug-2022, compared with 87% for the total market. 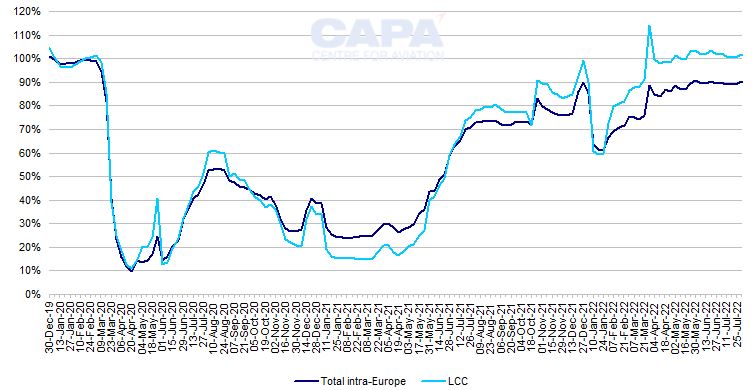 As a result of their stronger recovery, LCCs have grown their seat share on intra-Europe routes since before the coronavirus pandemic. 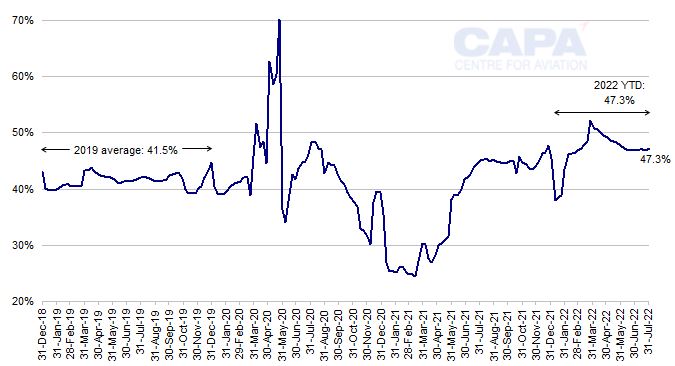 Weekly data can be volatile, but it seems that LCC share on intra-European routes is now structurally higher.