The European Union has proposed to limit until 2020 its Emissions Trading System to that part of an intercontinental flight that operates within EU airspace, in an attempt to persuade the UN agency ICAO to reach a global solution to the carbon emissions problem. The next three-yearly ICAO assembly, starting in Montreal on 24-Sep-2013, is expected to include a resolution about the use of global market-based measures aimed at reducing aviation’s emissions.

IATA’s annual meeting in Jun-2013 backed a plan based on airlines offsetting their emissions after 2020 by purchasing so-called carbon permits (which allow the purchaser to emit carbon dioxide, CO2) from other sectors that manage to reduce pollution. IATA represents 240 airlines globally, but there remain significant hurdles to a global agreement since, ultimately, it is governments (through ICAO) that will have to agree any measures.

ICAO agreement is far from assured

A spokesman for Connie Hedegaard, the European climate action commissioner, said on 5-Sep-2013: “This [ICAO assembly] is a multilateral negotiation where you give and take. Only in return for a global deal, the EU has offered to continue emissions curbs for intra-European flights as well as the part of international flights covered by regional airspace up to 2020.”

A number of developing countries have expressed a reluctance to be included in any global scheme to limit carbon emissions, since they believe the problem was not of their making and that their airlines’ growth should not be artificially curbed. The IATA-backed approach would be less burdensome to these airlines than a cap and trade system such as the European Emissions Trading System (ETS), which limits the total number of emissions, but reaching agreement among governments remains a challenge.

EU countries, with support from Australia and the UAE, are thought to be in favour of a single global market-based measure, while some other nations would prefer an approach that only covers emissions in the country of departure or arrival and excludes emissions over the oceans and third countries. This latter approach would only cover 22% of global aviation’s CO2 emissions and is unlikely to satisfy the EU, who would then likely seek to enforce its scheme in full.

Stop the clock; the EU temporarily suspended the ETS

In Nov-2012, the EU agreed to suspend by one year the application of the ETS to flights starting or ending outside EU airspace, in order to allow time for a global scheme to be developed. This concession, referred to as ‘Stop the Clock’, followed strong opposition to the EU’s ETS by many countries, most notably the US, Brazil, China, India and Russia.

For example, the US Congress passed a bill prohibiting US airlines from participating in the scheme and China delayed ordering Airbus aircraft in protest against its airlines being included. The scheme was also opposed by much of the aviation industry, including IATA, AEA and Airbus.

During this one year period, the EU would only apply the scheme to flights within its airspace. ICAO agreed to work towards a proposal to address airlines’ carbon emissions on a global basis in time for its next assembly, which runs from 24-Sep-2013 to 4-Oct-2013. The EU was clear that it would reactivate plans to include all flights to and from its airspace in their entirety if ICAO failed to find a solution.

The EU’s latest proposal would exclude that portion of flights that take place outside EU airspace. This is a concession from its current position, approved by the European Parliament and member states, that all of a flight that starts or ends in the EU is included in the ETS. The EU wants to signal its encouragement for the ICAO to agree and implement a global solution.

Emissions trading allows polluters to exceed limits, but only so much

An emissions trading scheme starts off with the concept that polluters are allowed to pollute, provided that they buy sufficient permits to emit the volume of CO2 that their operations generate. The essential elements of the EU ETS, which has been in operation since 2005, are that it sets a cap on the total number of permits available in the market and then allows participants to trade these permits. As with any other traded commodity, the price for the permits is set by the market and depends on the balance of supply and demand.

In 2008, the EU adopted legislation to bring aviation into the ETS from 2012, with a cap on total aviation emissions allowances (one allowance represents one tonne of CO2). The initial cap is 97% of the industry’s average emissions from 2004 to 2006, of which 82% are free and 15% are auctioned. There is also a special reserve, amounting to 3% of the total allowances, for allocation to new operators and those experiencing strong growth. The free allocation is based on total tonne kilometres for each airline in 2010.

Any operator emitting more than its allowed volume of CO2 will either have to reduce emissions or buy extra allowances. Airlines can buy allowances from the existing EU ETS and also have the possibility to buy them from the so-called Kyoto mechanisms, which involve emissions-reduction projects in developing and industrialised countries.

Non-compliance with the requirements of ETS faces a penalty of EUR100 per missing allowance, in addition to the requirement to buy missing allowances, and even a possible ban on operations. Policing of the system is the responsibility of the member state that granted the airline’s operating licence, or, in the case of non-EU airlines, the member state where the airline’s emissions are greatest.

In Mar-2013, IATA published its estimate that the cost of the EU ETS to the airline industry would come to EUR30 million for 2012, compared with EUR300 million if the ‘Stop the Clock’ suspension of its application to international flights starting or ending outside the EU portion had not been implemented.

Assuming that the suspension continues to be operative for the whole of this year, IATA estimated that the cost in 2013 would be EUR40 million, versus EUR500 million if applied in full. The cost in 2020, with all flights to/from and within the EU included, was estimated at EUR1.5 billion (EUR130 million if restricted to intra-EU flights only). 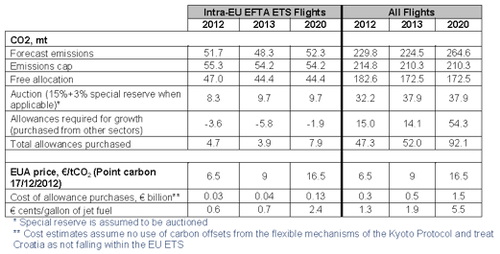 The price of carbon allowances is volatile

One of the key difficulties for anyone attempting to model the costs of the scheme to the airline industry is the volatility in the price of allowances, which has varied from around EUR20 in 2011 to less than EUR3 in 2013. IATA’s estimates were based on a price for emissions allowances of EUR6.5 per tonne in 2012, EUR9 in 2013 and EUR16.5 in 2020. 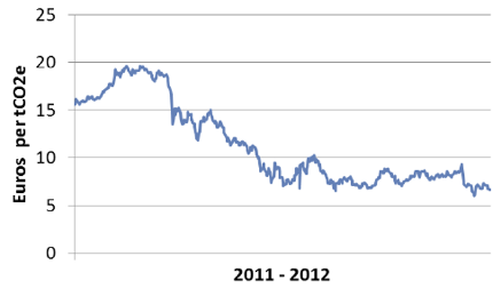 A combination of weak economic activity and oversupply of emissions permits has caused the decline in the price to as low as EUR2.50 earlier this year. Afraid that such low prices might undermine the feasibility of the scheme, the European Parliament voted in Jul-2013 in favour of action to support the price.

The plan, which needs majority support from member states, involves a temporary delay in the auction of permits. More recently, prices are back up above EUR5.

Air transport emissions account for only around 2% of global manmade CO2 emissions, although there are arguments to suggest that the emission of other pollutants adds to the climate change impact of the industry. These others include oxides of nitrogen, or NOx (with a higher impact when emitted at altitude), water vapour in the form of contrails and particulates including soot and sulphates. According to IATA, the total climate change impact of aviation is 3%, expected to increase to around 5% by 2050.

The current ICAO activity, and IATA’s adoption of a resolution in favour of a global market-based mechanism, signals a near consensus in the airline industry that economic measures are an important tool to tackle carbon emissions. However, IATA believes that this is only one of four approaches, or pillars, to addressing the problem. 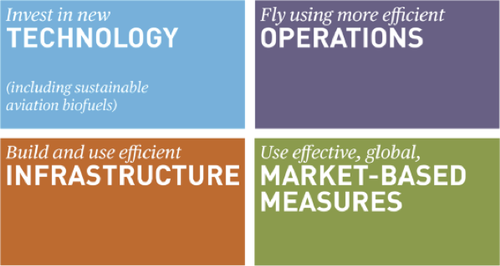 In addition to market-based measures, IATA argues that technology, flight operations and infrastructure can all contribute to mitigating the environmental impact of aviation.

Technological measures include enhancements to existing fleet, replacing less efficient aircraft and reinventing aircraft for the longer term. A newer technological development has been the advent of biofuels, although these have yet to become commercially viable. 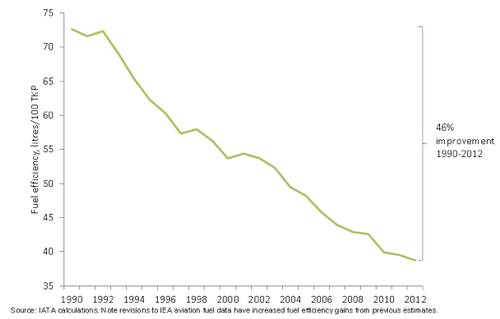 Greater fuel efficiency (using traditional kerosene) has helped to decrease the volume of fuel burned per tonne kilometre by 46% between 1990 and 2012 and new standards to be adopted in 2016 will ensure that all new aircraft meet a baseline for CO2 emissions. IATA believes it has identified technologies to improve fuel burn per aircraft by up to 30%.

The Intergovernmental Panel on Climate Change (IPCC) has said that improved operations could reduce fuel burn and CO2 emissions by up to 6% per annum and that addressing airport and airspace inefficiencies could avoid up to 12% of emissions (for example, the Single European Sky). 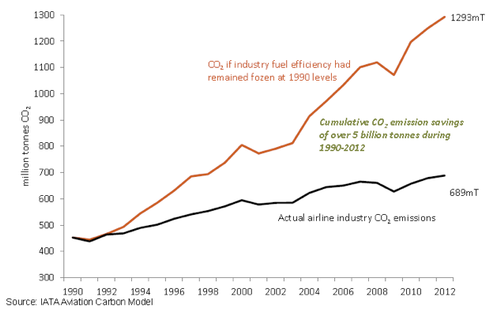 IATA has set ambitious targets for the industry to improve fuel efficiency by an average of 1.5% per annum to 3030, to cap emissions from 2020 (“carbon-neutral growth” or CNG2020) and then to halve emissions by 2050 relative to 2005 levels. 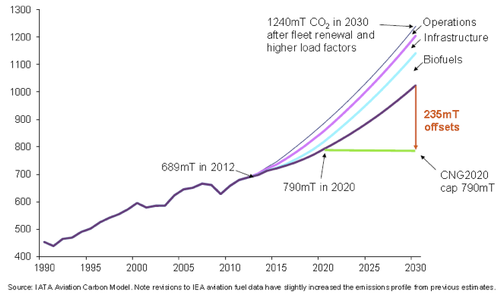 In IATA’s vision for containing emissions, market-based economic measures are a tool that will be of use in the medium term, but which will be relatively minor in their impact compared with the other three elements of its strategy in the long term. 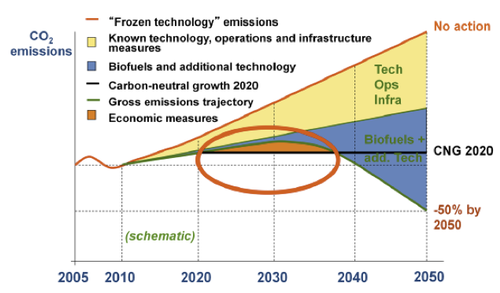 The three options for a market based system

ICAO is considering three options for a market-based measure: 1) a mandatory offsetting scheme, where all airlines buy carbon credits from other industries to offset growth; 2) as per the first option, but with a revenue charge on airlines also; or 3) a global ETS similar to the EU scheme. ICAO is also working on a framework for countries that want to implement their own market-based measures (either as an interim step pending a global scheme, or as a back-up if no global agreement is reached).

IATA backs the first of these three options, but this plan may not end up being precisely what is adopted by ICAO and the world’s governments - if indeed anything is adopted at all. It is certainly simpler than attempting a global ETS at this stage and should probably satisfy Brussels, although the concession offered by the EU would require approval by the European Parliament and member states.

All eyes are on the ICAO assembly

Whatever approach it adopts, the ICAO assembly must agree clear steps towards a global market-based measure to be implemented at its next assembly in 2016. If it fails to do so, this could leave the EU with little choice other than to implement its ETS in full, potentially provoking fresh protests from those countries that have opposed it in the past.

For the airlines themselves, it is increasingly important that the world’s governments do manage to agree a common way forward. If not, airlines could end up with an unwieldy tangle of different and contradicting schemes involving taxes, fines and trading systems, based on non-standard criteria and pricing. For an industry that already deals with hugely volatile demand and costs, this is to be avoided.