On 13-Feb-2010, the US Department of Transportation tentatively authorised American Airlines and British Airways’ application for anti-trust immunity to permit a trans-Atlantic joint venture that will allow joint pricing, scheduling and marketing by the two carriers, as well as with other oneworld members, Iberia, Royal Jordanian and Finnair. The decision was an important win for British Airways, which is surprisingly only to be required to give up four pairs of daily slots at Heathrow as a condition of approval. It is also an important step in the US-EU open skies negotiations and, in turn, for the global airline competitive structure.

When the oneworld carriers applied for similar anti-trust immunity in 2002, the DoT was only prepared to allow it if BA relinquished 16 daily slot pairs, a condition the British flag was not prepared to accept. Now, in reducing that demand, the DoT determined that anti-trust immunity to the oneworld group “would provide travelers and shippers with a variety of benefits, including lower fares on more routes, increased services, better schedules and reduced travel and connection times.”

The authorisation, in the form of a show cause order, will be open for comments for 45 days and will then be confirmed (probably) or denied within the following 15 days. In addition to the slot condition, the order also imposes requirements designed “to ensure capacity growth, and require the carriers to submit traffic data”; and the joint venture must be implemented within 18 months of final approval.

British Airways has actually established a slightly stronger position at its premier gateway hub since the last anti-trust application, although competition overall has increased. The British flag carrier accounted for 42.7% of Heathrow’s air traffic movements (ATM) this Winter; that is up 4 ppts from 38.7% in Winter 2001/02, the time of the previous BA-AA antitrust rejection, mostly due to cutbacks by foreign airlines, more codesharing and assorted other reasons. 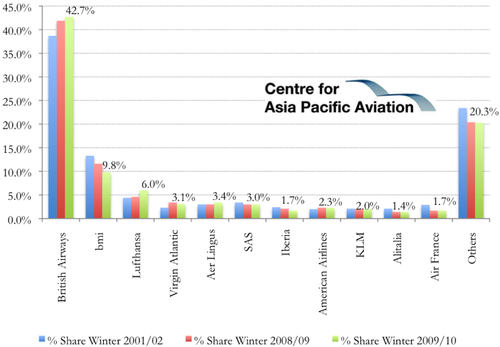 British Airways accounts for a slightly greater share of Heathrow’s activity when weekly seats are considered, with a 43.1% share, up from 40.7% in Winter 2001/02 - in this case due to a reduced reliance on short haul, narrow gauge operations. 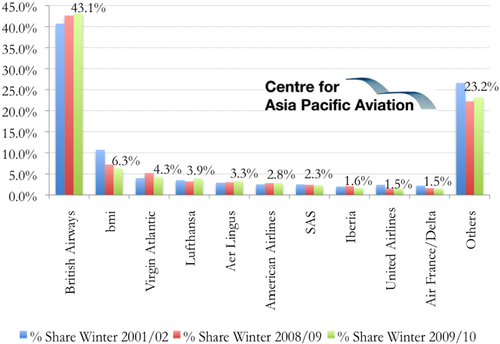 New York JFK is Heathrow’s biggest city pair – by a considerable margin – followed by Dublin, Amsterdam, Paris and Frankfurt. The JFK figure actually understates the size of the total city pair, as airlines (including BA) operate from Newark and La Guardia, as well as BA's all-business class A318 service which flies into London City Airport. Of the other major US gateways linked to Heathrow, Los Angeles is the 12th busiest city pair, while Chicago is 16th. 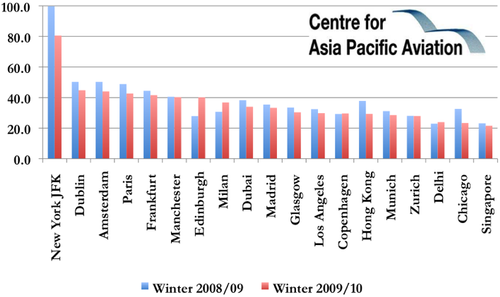 There has been a 64% increase in frequencies from Heathrow to New York since Winter 2001/02 (even accounting for the 19.3% decline since Winter 2008/09), as new competition has entered the market; nonetheless British Airways has more or less been able to retain its market share on the route.

By contrast, over the same period, there have been 20%+ decreases in weekly frequencies from Heathrow to other key European cities, including a 34% drop to Paris. 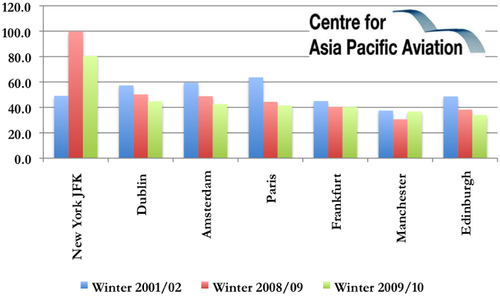 oneworld on a roll – good for global competition?

The tentative approval continues the roll that the oneworld alliance has been on recently; the much-publicised partnership of Japan Airlines in one world was confirmed last week, while a much less newsworthy joint operating agreement between British Airways and Qantas was also given tentative approval.

JAL, American and its one world partners filed with the DoT for anti-trust immunity on trans-Pacific services on Friday, 12-Feb-2010 (a process that will be heard in parallel with a similar United Airlines/Star Alliance-All Nippon Airways application).

Just a couple of weeks ago, oneworld appeared to be teetering on the brink of implosion, as JAL threatened to migrate to the Delta/Air France SkyTeam alliance and the trans-Atlantic joint venture was apparently still also in jeopardy. But, assuming the DoT’s show cause order results in final approval in Apr-2010 (even perhaps with a few more slots negotiated away in a compromise), and the JAL application is approved, probably in 3Q2010, oneworld is again revolving firmly on its axis.

These developments are all substantially valuable for oneworld – and British Airways is the major beneficiary. Sir Richard Branson would concur. Virgin Atlantic is the biggest loser in this process and Branson immediately attacked the decision as endorsing a “monster monopoly”.

But the decision is only one part in a much larger jigsaw of aviation policy evolution and Virgin, along with some other mid-sized, non-aligned airlines may be the casualties.

In its announcement, the DoT also said “the proposed alliance would enhance competition around the world by creating competition with the existing Star Alliance and the SkyTeam alliance, which already have been granted immunity”.

This global view makes it clear that the application was being judged on a much wider canvas than merely US-Europe market conditions. On both sides of the Atlantic, there is an emerging consensus – despite some strong voices of dissent – that, so long as international rules prevent airline mergers and acquisitions, global alliances are a logical and valuable alternative.

The timing of the DoT’s announcement should also be seen in the context of current talks between the EU and the US on confirming a further stage in trans-Atlantic open skies, part of a process begun in 2007.  Each side has negotiating targets in these talks. Neither wants to lose the valuable advances already made, but there are outstanding differences on such key issues as foreign investment and the basic issue of whether anti-trust immunity for the alliances should be a near-given.

Whether the timing of the Department’s release was intended to send a signal to the EU, or it reflected the fact that a broad consensus may already have been achieved is not clear at this stage. Either way, it would be much more controversial now if the EU continues to express deep doubts about the AA-BA team approval.

The European body has still to give its sanction and, earlier this month, British Airways was directed to provide further information on the proposed plans. This may not be life-threatening, as the EU also has slightly different issues to consider, such as the internal effects within Europe of the de facto joint venture, for example as part of the proposed BA-Iberia merger.

But it does raise the prospect of the EU demanding further Heathrow slot concessions from British Airways. This is one area for example where British Airways’ main alliance competitors, Air France-KLM and Lufthansa may feel able to criticise the BA-Iberia merger, without compromising their own wider alliance arguments.

Overall, the DoT’s move should be seen as a positive step preceding the next round of US-EU talks. The alternative could probably not be entertained. Had the Department imposed unacceptably onerous conditions, the whole open skies process would probably have been thrown into jeopardy. The other two major alliances already have immunity, so oneworld would have been drastically relegated in competitive standing.

And, in turn, as the two major world powers battle out a compromise, the outcome increasingly has global reach. There are few independent voices who oppose the value that the global alliances offer to consumers. So there is not great controversy there – although there are many differences of opinion over the implementation and details of some of the agreements. The bottom line appears to be unarguable: consumers do benefit from the network of bilateral and multilateral airline arrangements.

Assuming all the necessary approvals are given to these various alliance proposals and that the US and EU (and Canada) are able to agree on open skies across the Atlantic, the aviation horizon will be greatly changed from where it was just a few years ago. These agreements put in place some of the biggest outstanding parts of the global policy jigsaw.

Once the main alliances are embedded as part of the international competitive framework, the US and European airlines at the core of those alliances are the major beneficiaries.

The alliances allow those carriers to retain their relevance in a world where the Asian and Middle East airline industry is quickly gaining the ascendancy. And the message to most other airlines is: enter an alliance or risk being marginalised.

Virgin Atlantic is one of those. Rather than holding any fundamental opposition to the concept, much of Sir Richard Branson’s verbal frenzy illustrates the Virgin Group’s frustration at being unable to make its own move on alliance participation. It would love to link with Star, or SkyTeam for that matter. But a reluctant Singapore Airlines’ 49% holding in the carrier and Lufthansa’s already large presence in London through its ownership of BMI reduces the options.

Major emerging world power, Emirates, is also a keen opponent of the impact of alliances on competition in the markets in which it operates. In Emirates’ case, the decision is apparently its own, although the paranoia with which the European alliance leaders view the Gulf airlines would also make for difficult bedfellows.

Meanwhile, at government level, there is a large electorate which is being excluded from this whole reshaping of the world aviation regulatory structure - namely those of the countries of Asia and the Middle East. Last year, intra-Asian traffic consituted the largest market in the world, overtaking the US for the first time. That is where the future world growth will be, as Europe’s and America’s airlines reduce capacity and their markets exhibit sluggish expansion.

There can be little doubt that the DoT’s decision was a necessary and useful one in the evolution of the heavily distorted world airline industry. Yet it is notable that, by entrenching the legacy airlines at the heart of those groupings, the process of supporting global alliances is in fact giving new life to a form of airline whose economic and financial format has been clearly demonstrated to be inefficient.

Most useful measures in any walk of life have at least some unintended side effects. But they do need to be carefully watched. When it comes to the next stage of evolution of the global airline system, it will be vital to recognise and reward the independently-originated, and generally much more efficient, new generation airlines too.