Delta Air Lines plans to cut its international capacity during the 2015-2016 winter season to bolster its unit revenue performance that was dragged down in 1Q2015 by weakening currencies against the USD. The airline is looking to regain some unit revenue traction in late 2015 as it reduces its supply to weaker performing markets.

The company believes that lower fuel prices and its continued favourable unit cost performance should offset the currency headwinds it faces as operating margins are forecasted at 16% to 18%. Overall, Delta expects margin and profitability expansion in 2015 despite the challenges created by the stronger USD.

Part of Delta’s bullishness about withstanding currency pressure is a restructuring of its hedge book that generated USD1 billion in losses for 1Q2015, but should align Delta’s fuel costs with industry averages in 2H2015.

Delta’s unit revenue dropped 1.7% year-on-year in 1Q2015, with a 1.5ppt of the decline attributed to the currency headwinds. Company President Ed Bastian remarked that absent those challenges Delta would have posted a flat unit revenue performance. The company’s yields notched down 0.4%.

The airline recorded unit revenue declines in every geographical entity except the US domestic market, where unit revenues and yields each grew roughly 2% on 7% capacity growth. Mr Bastian specifically highlighted Seattle’s 2% unit revenue growth on a 55% rise in capacity year-on-year and a solid performance in New York JFK transcontinental markets, particularly Los Angeles.

Delta has been making a push in Seattle during the last few years to leverage the airport as its main Pacific gateway, and has launched numerous domestic markets to feed that service. Delta also recorded 4% unit revenue growth in 1Q2014 in its hub to hub markets.

The Pacific remains a challenging geography for Delta given its position as the leading airline between the US and Japan. The depreciation of the JPY has dragged down Delta’s Pacific performance for several quarters.

Delta has been cutting capacity to Japan during the last year – reflected in an approximately 12% decline year-on-year in seats deployed from the US to Japan (based on CAPA and OAG data) – but it still holds a 23% seat share. Japan Airlines holds a similar share.

Delta has the largest exposure to Japan among the big three US airlines. United has about an 18% share of capacity in the US-Japan market and American has a 6% share. 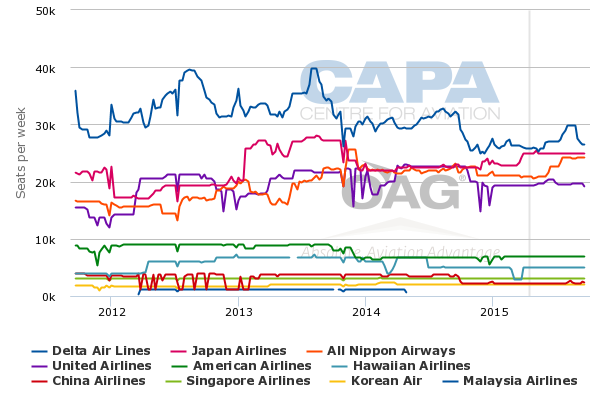 Delta’s Pacific unit revenues fell 9% year-on-year in 1Q2015 on an 8% slide in yields and a 1.4% drop in capacity. Mr Bastian remarked that 7ppt of the unit revenue decline was attributable to foreign exchange, and Delta posted a USD40m revenue headwind in its Pacific operations net of hedges.

Delta posted a nearly 3% drop in trans-Atlantic unit revenues year-on-year in 1Q2015, but yields increased 1.4% and capacity grew 4%. Roughly 3ppt of the unit revenue drop was driven by currency issues, with the Middle East, Africa and the Russian entities recording a 15% unit revenue decline even as capacity fell 10% year-on-year to those regions.

Weakness in those areas was offset by strength in London and core Europe. Mr Bastian emphasised that revenue from Delta’s joint venture with Virgin Atlantic increased by double digits during the quarter.

The double-digit devaluation of the BRL against the USD drove Delta’s Latin America unit revenues down 4% during 1Q2015 while yields declined 1.2%. Some of the unit revenue drop was also driven by cuts Delta made to its service from Atlanta to Caracas, Venezuela from daily to weekly as a result of Venezuela holding cash owed to airlines and the country’s weak economy.

As the currency challenges grew more intense during 1Q2015, Delta stated it was re-examining its capacity growth after 3Q2015 to offset some of the foreign exchange weakness, which Delta believes will create a USD600 million headwind in international reveneus in 2015 (which grows to USD1 billion when factoring in reduced fuel surcharges).

See related report: Unit revenue pressure could linger beyond 1Q2015 for US airlines as capacity creeps up

Starting in 4Q2015 Delta plans to reduce its international capacity by 3%. This includes a 15% to 20% decline in Japan, 15% to Brazil and 15% to 20% to Africa, India the Middle East and a suspension of JFK-Moscow service for the winter season.

Delta plans to execute the capacity reductions to Japan through reduced frequencies and aircraft downgauge as six Boeing 747s will be removed from those operations by year-end after pulling four of those jets from its Pacific network in 2014. CAPA’s fleet database shows that presently (16-Apr-2015) Delta has 13 passenger 747-400s in service and three in storage.

With the BRL’s double-digit currency devaluation against the USD, it is no surprise that Mr Bastian concluded Brazil is “having some real struggles”. Data from CAPA and OAG show that one-way seats on offer between the US and Brazil are essentially flat in Apr-2014 compared to Apr-2013, with American’s seats down 4% and United also posting a 4% drop.

Among the big three US airlines, American retains the largest seat share at 35% followed by Delta (whose seats are up 3% year-on-year) with a 16% share and United’s 16% share. TAM is the second largest airline overall in the US-Brazil market with about a 28% share of current seat capacity.

Once all the planned capacity adjustments take effect, Delta estimates that its system-wide capacity growth for 4Q2015 will be flat, while domestic capacity should rise 2%.

Delta projects a further decline in in unit revenues for 2Q2015 of 2% to 4% with 3ppt of the decline resulting from weaker currencies. Mr Bastian also remarked that Delta posted a particularly strong 2Q2014 unit revenue performance of 6% growth, and noted the year-on-year changes are the toughest comparisons Delta will face in 2015.

Delta also believes that its unit costs excluding fuel, which will grow under 2% in 2Q2015 after falling 1% in 1Q2015, should ease some of the sting of the rising USD. The airline estimates that 10% of its expenses are non-USD denominated, and should benefit non-fuel unit costs by 1ppt in 2Q2014.

After being bitten by its hedges once fuel prices began to drastically drop in late 2014, Delta has restructured its hedge book, which resulted in USD1 billion in losses for 1Q2015. But beginning in Jul-2015, Delta expects to pay near market prices for fuel, and projects overall USD2 billion in fuel savings for 2015, which is helping to offset some of the headwinds it is facing in foreign currency exchanges.

Delta is projecting a 16% to 18% operating margin for 2Q2015. Hedge losses pressured margins in 1Q2015 with Delta reporting a 8.8% margin for the quarter. Factoring out the fuel hedging losses Delta’s margins for the time period would have reached 17.8%.

Now that it has re-worked its hedge book for 2H2015, Delta will post roughly USD300 million in hedge losses during that time period. It anticipates 90% to 95% downside participation of Brent crude priced at USD40 per barrel. During 2H2015 Delta projects an all fuel price of USD2 to USD2.05 per gallon, which is roughly USD0.70 to USD0.75 lower than 2014. After all the hedging noise settles, Delta projects USD2 billion in fuel savings for 2015.

Delta’s solid 1Q provides a shield against f/x, but more capacity cuts may be necessary

Despite the hedging losses and unit revenue pressure Delta recorded a USD213 million increase in 1Q2015 net income to USD746 million. Revenues increased 5% to USD9.4 billion while top-line expenses fell 4% to USD8 billion, which drove operating income up USD620 million year-on-year to USD1.4 billion. For the 12 months ending 31-Mar-2015 the airline delivered a ROIC of 22%.

Delta’s currency challenges are a telling sign for the two other large global network airlines as American has significant exposure to the weak economies of Latin America and United faces weakening currencies in most of its global geographic entities.

Delta appears to be solidly positioned to withstand the current foreign exchange challenges it faces in part due to a still-decent domestic environment. It is delivering solid top-line results, ample shareholder returns and strong ROIC targets.

But there is some uncertainty over how long the currency pressure will persist, and depending on the longevity of those challenges, Delta may need to further refine its international capacity cuts.