Delta Air Lines appears to be attempting to take a chunk of JetBlue’s successful build-up at Boston Logan for itself as a round of new route launches Delta has planned beginning in Mar-2014 are in markets largely dominated by JetBlue. While it is not as aggressive as some of Delta’s latest moves including a full-blown assault on long-time partner Alaska Airlines at its hub in Seattle, the minor push from Boston does reflect Delta’s no holds barred approach in ensuring it has ample presence in strategic US domestic markets.

JetBlue is by no means unfamiliar with competition from Delta as the Atlanta-hubbed carrier holds a significant seat share from JetBlue’s JFK hub, and in late 2012 and early 2013 added pressure to JetBlue in markets from both JFK and New York LaGuardia.

The move to bolster competition with JetBlue in Boston is interesting, and Delta could be adding service to feed Virgin Atlantic’s Heathrow flights as its joint venture with Delta begins. Delta’s additions will do little to change JetBlue’s dominance in Boston, but it does send a message that the carrier will remain aggressive in leveraging its network as United, at some point, will presumably will reap the synergies of its merger and American and US Airways officially start combining their operations.

JetBlue entered the Boston market in 2004, but really started making a push from its second largest base around the 2007 timeframe as the carrier set a course to target a larger portion of business travellers to even out peaks and troughs inherent in catering to the leisure-traveller and visiting, friends and relatives (VFR) segments. 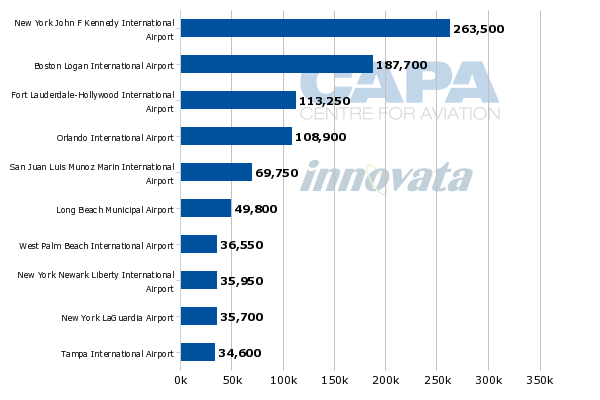 Between 2007 and roughly mid-2012 JetBlue launched 27 new markets from Boston, and has a self-declared goal of reaching 150 daily departures from Logan. It has put considerable effort into courting corporate customers in Boston, reflected in its steadily rising business revenues in key markets including New York, Chicago, Washington DC and Raleigh. 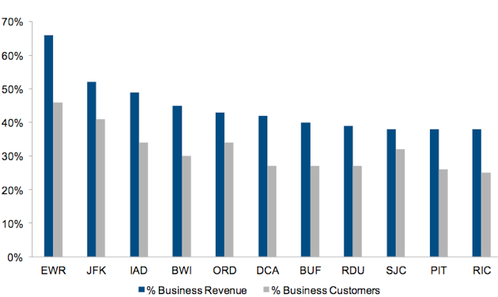 JetBlue’s rapid expansion in Boston has resulted in steady passenger growth at Logan from 25 million passengers in 2009 (which was a 2.3% decline year-on-year) to 29 million in 2012. 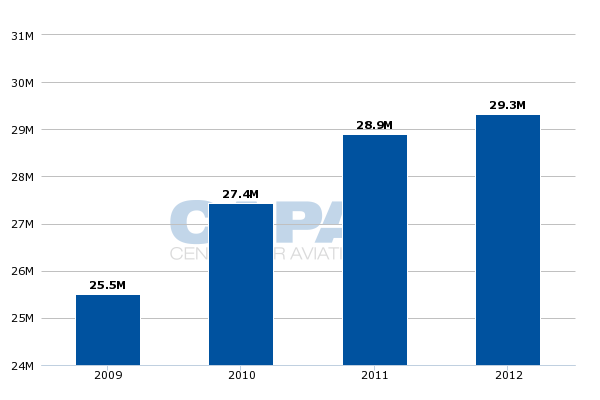 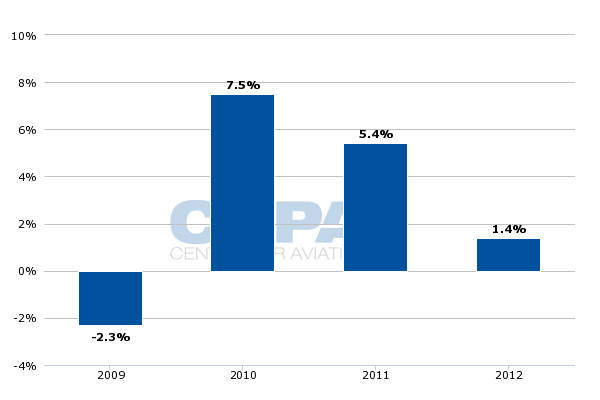 Around mid-2012 JetBlue’s percentage of business revenue on flights between Boston and Richmond, Virginia had grown to more than 40% on a mix of about 30% business customers. Perhaps Delta took notice of the business traffic in the market as it plans to launch new daily service between Boston and Virginia’s state capital beginning in Mar-2014.

Based on schedules in Innovata, prior to Delta’s launch there will be roughly 2,900 one-way weekly seats available in the market with JetBlue holding a 68% share and US Airways accounting for 32% of the seats. Once Delta adds approximately 1,078 seats in the market, it will assume a 27% share leaving US Airways’ share at 23% and JetBlue’s at 50%.

JetBlue percent of business revenue and customers in corporate markets from Boston: 2012

Delta is operating Bombardier CRJ900s on the pairing that feature a first class, its Economy Comfort more legroom option and regular economy. The carrier also offers Wi-Fi, something JetBlue is in the midst of installing on its aircraft. With the typical miles promotions and access to a broader network, it does seem Delta is ushering in a new competitive dynamic on the pairing. It could also be fortifying the route as American and US Airways start the process of merging, just to ensure it retains lucrative business travellers in the Boston metro area.

Along with new service to Richmond during Mar-2014, Delta is also introducing new service to Jacksonville, Florida, breaking JetBlue’s monopoly status on the pairing. Delta will add roughly 539 weekly one-way seats in the market through the introduction once its daily CRJ900-operated flights begin, brining the total to roughly 1,939.

Jacksonville is the state of Florida’s most populous city and the region is the headquarters for CSX, Fidelity National Financial and the Winn-Dixie Stores. Given Delta’s product attributes and the ensuing promotional fares tied to the Jacksonville launch, it should be interesting competition for JetBlue as it works to increase its relevance among corporate clients in Boston.

Delta is also introducing service from Boston to Las Vegas in Mar-2014 with three weekly flights flown with Boeing 737-800 narrowbodies. Schedules in Innovata show that the three flights will result in roughly 480 weekly seats in the market joining 1,950 one-way seats offered by JetBlue. A study of Innovata scheduling shows that US Airways pulled out of Boston-Las Vegas in late 2011 as it worked to cycle its flying at its hubs in Charlotte, Phoenix, Philadelphia and Washington, DC.

Boston-Las Vegas is not a hub-to-hub or hub and spoke market for Delta, so connecting traffic opportunities would seem slim. Virgin Atlantic serves Las Vegas from London Gatwick, so there could be some connecting opportunities for Virgin Atlantic’s Heathrow passengers through Boston, but with only three weekly flights offered by Delta it seems the Boston-Las Vegas flights are clearly not designed to maximise connections.

Delta might be testing Nassau for additional service from Boston

Rounding out Delta’s service push to Boston is adding a daily frequency to Los Angeles for a total of two daily flights and Saturday-only seasonal service to Nassau and Providenciales.

In addition to Delta, the busy Boston-Los Angeles market is served by American, United Virgin America, and JetBlue. It is not clear if the market actually needs any additional capacity, but obviously Delta has deemed the pairing important enough to make sure it offers an improved schedule to business and leisure customers alike.

With the new flights to Nassau, Delta could be testing the waters for more permanent service. During the past year it has transitioned seasonal New York LaGuardia flights to year-round, and the carrier might be introducing its service from Boston to determine if it can garner traffic to add more service. Its foray is conservative as the single flight will not add a huge amount of capacity in the Boston-Nassau market that is served by JetBlue. Presently Delta serves Providenciales in the Turks and Caicos from its Atlanta hub with a single weekly flight, and it will compete with JetBlue and US Airways on the new Boston-Providenciales service. 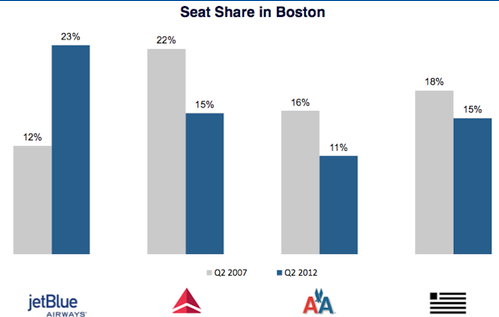 Presently JetBlue’s one-way seat share from Boston is 26% compared with 15% for Delta and 14% for US Airways. 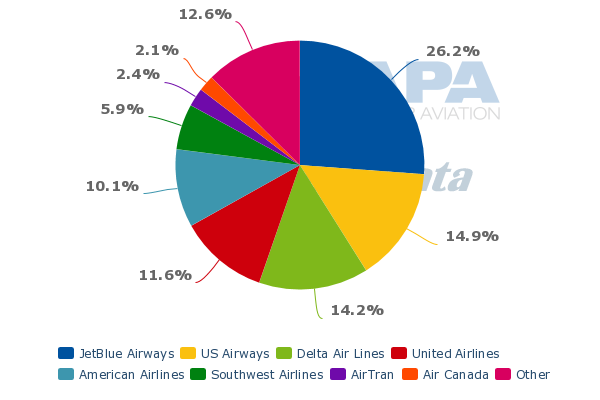 Once Delta starts its latest expansion from Boston in 2014 it will introduce roughly 2,000 one-way weekly seats in the three new markets – Richmond, Jacksonville and Las Vegas – with the bulk, 1,078, deployed to Richmond.

Clearly Delta believes it can leverage its global brand and more extensive network and perhaps compete vigorously for, or steal some of the corporate customers JetBlue has gained in Boston. Whatever Delta’s true motives or the outcome of its efforts, the carrier’s latest moves in Seattle and Boston show that Delta has no fear in attempting to disrupt strongholds of low-cost and hybrid carriers to ensure it retains network superiority.

As the most healthy US legacy carrier by a widening gap, there are likely more aggressive moves in the works by Delta, which remains unapologetic in leveraging its new market power in a consolidated marketplace to seize on opportunities to improve its profitability.