Delta Air Lines is targeting JetBlue Airways through new and bolstered flights being introduced to Florida and the Caribbean from New York’s LaGuardia and JFK airports in late 2012 and early 2013. Delta’s move is a departure from its recent New York strategy of using slots obtained at LaGuardia to capture business travellers from smaller markets that prefer the convenience of getting in and out of the airport closest to downtown Manhattan. But in its latest offensive Delta is targeting leisure markets where JetBlue is deeply entrenched, and in some cases breaking JetBlue’s monopoly on those routes.

Delta in Mar-2012 introduced new flights from LaGuardia to 15 markets as it began developing the airport into a hub after gaining 132 slot pairs at the facility from US Airways. Delta is scheduled to complete the new market phase-in during Jul-2012 when it launches 26 additional markets from LaGuardia.

The majority of the new routes are smaller markets such as Norfolk, Virginia; Nashville, Tennessee; and Dayton, Ohio served with 50- and 70-seat regional jets. New flights being introduced by Delta to larger markets include service to Delta’s Minneapolis hub, Miami, and Denver.

Delta’s new crop of flights from both LaGuardia and JFK in December are strictly leisure markets where the carrier is either introducing new service or transitioning seasonal service into year-round flights. New service includes LaGuardia-Bermuda, JFK-St Maarten, JFK-Fort Myers and LaGuardia-Sarasota. Additionally, Delta is transitioning seasonal flights from JFK to Aruba and Punta Cana and LaGuardia to Nassau to year-round service.

Delta’s new round of flights are an open attack on JetBlue, which with the exception of LaGuardia-Miami serves all of those markets and holds monopoly status on JFK-Fort Myers and LaGuardia-Sarasota. As Delta transitions Aruba, Punta Cana and Nassau to year-round service, JetBlue will face heightened and consistent competition from Delta in those markets.

Changes in Delta’s flights between New York and Florida also appear to be an answer to new flights JetBlue is debuting from LaGuardia to Fort Myers and Tampa beginning in Jun-2012. Delta has countered JetBlue’s move with its own new JFK-Fort Myers flight and bolstered service from both New York airports to Tampa.

Sarasota is served from New York only by JetBlue, which operates services from JFK and LaGuardia but has more peak season seats from JFK. Delta already serves Fort Myers from LaGuardia while United serves the city from Newark and JetBlue in Jun-2012 will serve Fort Myers from all three New York airports. St Maarten is served by United from Newark and JetBlue from JFK. American Airlines recently ended its non-stop St Maarten service. Both American and JetBlue serve Bermuda from JFK only.

Delta’s expansion of existing Florida service includes a fifth daily flight between LaGuardia and Tampa and Miami, a fourth daily service from LaGuardia to Fort Myers and a second daily flight from JFK to Tampa.

Delta’s push into leisure markets from New York occurs as JetBlue recently assured analysts that Delta's build-up in the market would not create competitive issues for JetBlue, which caters to mostly leisure travellers from its New York base. “If you look at the portfolio that we have at JFK, it is predominantly a leisure origin portfolio,” remarked JetBlue chief commercial office Robin Hayes, who stressed the carrier had a a very small dependency on business travellers from New York.

The push into more leisure oriented markets is an interesting move by Delta, which during the last few months has touted its schedule from New York, particularly LaGuardia, as the most comprehensive for high-yield business passengers in the New York metro market. During a 17-May-2012 presentation to investors, Delta president Ed Bastian reiterated with the new LaGuardia expansion Delta will serve 47 of the top 50 business destinations from New York directly, and stated the carrier recorded unit revenue growth in LaGuardia during Apr-2012 in the high single digits despite growing capacity from the airport by 25%. Mr Bastian also took time to point out that Delta’s seat departures from New York during the Sep-2012 timeframe will be approximately double the offerings from JetBlue and American. 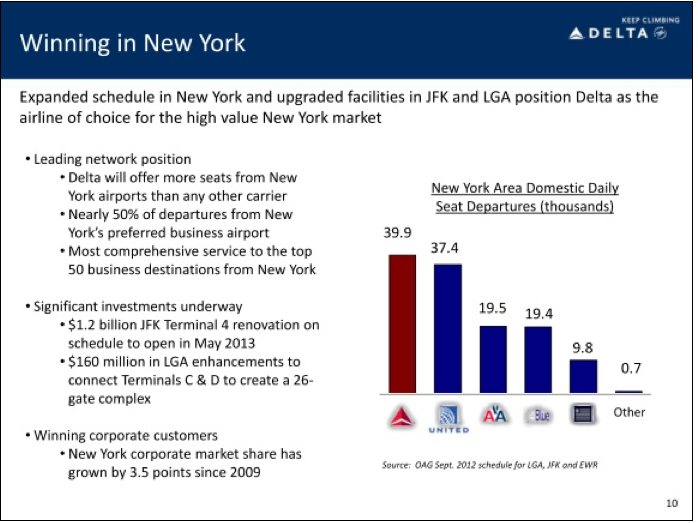 Delta is also competing with American on flights from the New York area to Bermuda. American and JetBlue each offer approximately 1100 seats from JFK to Bermuda. Delta is also entering the American-dominated LaGuardia-Miami market, where American offers 12,400 seats per week. American also serves JFK-Punta Cana, which is also served by JetBlue. Delta is also enhancing the already well-served JFK-Tampa market, as American, JetBlue and Delta together presently offer a combined 6000 weekly one-way seats; an additional 6000 weekly one-way seats are available from Newark and LaGuardia.

The only other significant competition Delta faces in its latest New York push is from Caribbean Airlines, which offers 1078 weekly one-way seats in the the JFK-Montego Bay market. The market is a legacy Air Jamaica route that Caribbean picked up after its merger with Air Jamaica in 2010. While Caribbean has a formidable point of sale advantage in Jamaica, it will be tough to compete with two of New York’s strongest carriers in one of its longest route.

JetBlue is no stranger to legacy airline competition, but Delta’s entry into some of JetBlue’s core north-south markets on the US east coast and the Caribbean will set the stage for an interesting competitive dynamic as Delta seeks to broaden its New York reach beyond its stated goal of being the number one carrier for business travellers in the market. While JetBlue continues to build up its presence in its focus city of Boston, JFK is still the carrier’s largest base in terms of seats offered, and will remain its base of operations. Yet Delta’s latest move is indicative of a larger effort underway to ensure its dominant position in New York in both business and leisure markets, which means JetBlue may need to recalculate how shielded it remains from Delta’s aggressive expansion in the New York market.

New and enhanced Delta service from New York to the Caribbean: Dec-2012 to Apr-2012