Delta’s aim to create a dual-hub structure in the New York market gets under way in earnest on 25-Mar-2012 when it launches the first crop of new flights from LaGuardia Airport, which it views as key to capturing business passengers who yearn for direct flights for easier access to Manhattan. Delta is betting it can reverse fortunes in some markets being abandoned by US Airways at LaGuardia to create a revenue premium.

Once the second tranche of flights is introduced by Delta from LaGuardia in Jul-2012, the carrier will operate roughly 100 new daily flights from the airport to 29 destinations, many that were served by US Airways with smaller-gauge aircraft.

The expansion means by the summer timetable Delta will hold 46% of the slots at LaGuardia, with American falling to a distant second with just 21% of the slots. 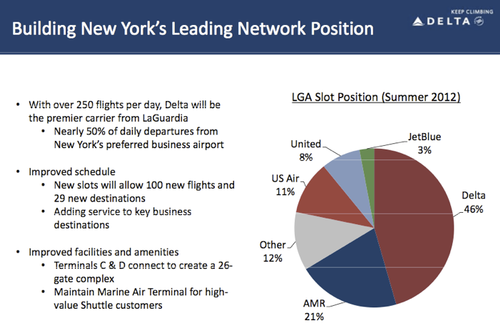 Delta and US Airways are effectively transitioning away from underperforming markets to areas where they see an opportunity to strengthen their competitive positions. US Airways estimates the slot swap will improve its annual profitability by USD75 million while Delta has estimated a USD200 million lift to its revenue by gaining what it terms its “fair share” of the New York market. Delta sees that greater scale will lift its yields, measured in revenue per available seat miles. 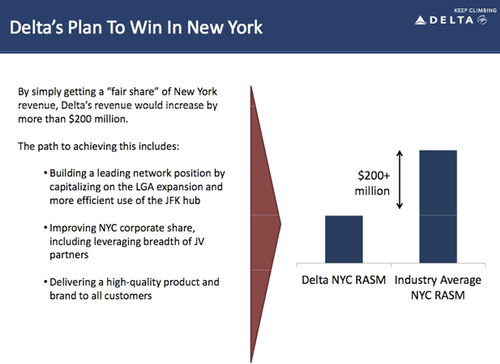 Delta executives have said that New York is one area of its network where it does not command a premium, and it is hoping to change that dynamic over time as a result of the slot swap deal and other changes it is making in the New York market.

While the changes Delta is making will alter the competitive dynamics in New York significantly, the carrier has said it is only moving roughly 5% of its assets from underperforming markets. It expects a quick ramp-up gaining traction from the asset transfer. After a bit of “choppiness” in the transition of markets in Apr-2012, May-2012 and Jun-2012 when there could be some overlap with US Airways, Delta believes the slot transaction will become earnings accretive in Jul-2012.

Ultra low cost carrier Spirit Airlines operates in both the Dallas-LaGuardia and Miami-LaGuardia markets. It operates flights from LaGuardia to its Fort Lauderdale base, which is 39km from Miami, with some of its passengers opting to travel onward from Fort Lauderdale to its destinations in the Caribbean and Latin America. Spirit’s strategy is to offer ultra low fares to stimulate traffic instead of stealing passengers from legacy carriers. Delta is targeting business travellers in Dallas and Miami, and is betting it can capture some portion of American’s corporate share by offering wi-fi internet fleet-wide and making investments American is hamstrung in executing while it is in Chapter 11.

Delta is investing USD100 million in facility upgrades at LaGuardia for a connector bridge from its D terminal to the US Airways C terminal as well as a new “Sky Club” lounge in the US Airways terminal joining its current lounge offering in the D terminal. Delta is also spending USD1.2 billion to overhaul Terminal 4 at JFK for a targeted completion in 2013.

Delta’s first round of new flights from LaGuardia: Commencing 25-Mar-2012

Source: Delta based on Dec-2011 projections

Delta’s second round of new flights from LaGuardia: commencing 11-Jul-2012

Source: Delta based on Dec-2011 projections

Delta currently offers nonstop service from JFK to seven markets it plans to introduce from LaGuardia this month: Buffalo, Rochester and Syracuse, New York; Richmond and Norfolk, Virginia; Miami, Florida; and Dallas, Texas. Schedules show it will still offer some nonstop flights in those markets in mid-Jul-2012. Delta likely wants to retain the feed from those markets to support its international flights from JFK. Delta has the largest share of seats offered from JFK, and SkyTeam carrier account for nearly 31% of the airport’s capacity. Delta has previously said it would retain Buffalo and Richmond flights, and introduce new JFK-Greensboro flights to enhance international connections from JFK. 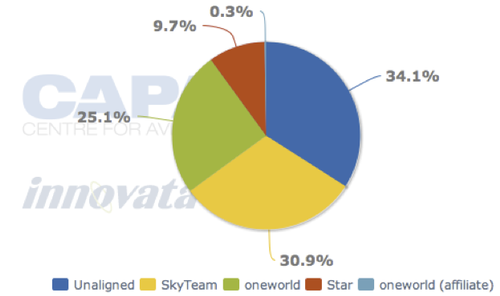 Delta has repeatedly stated that its two-hub strategy in New York is designed to capture corporate travellers who prefer the convenience of getting in and out of LaGuardia, effectively making the airport an O&D market, while focusing its push from JFK on long-haul service. The carrier has stressed it is optimising its 2012 schedule at JFK for transcontinental and international flights, and improved coordination at the airport with its SkyTeam partners.

JetBlue and Delta currently compete on flights from JFK to Rochester, Buffalo and Syracuse, three markets Delta is upgrading to regional jet service at LaGuardia as US Airways transitions out of those markets, where it has historically operated smaller Bombardier Dash 8 turboprops.

Delta could see value in keeping service from JFK to three New York state markets. Current schedules show JFK is the second largest domestic destination from Rochester, Buffalo and Syracuse in terms of seats per week, and Delta remains ahead of JetBlue with respect to total seats offered from each of the three airports. In Rochester and Syracuse, Delta falls second behind US Airways, and third behind Southwest and US Airways in Buffalo.

Even as Delta moves to bolster its presence in the lucrative New York market, United’s leading position at Newark is not eroding, with Star Alliance now commanding a nearly 80% seat share at the airport after Continental defected from SkyTeam in 2009 and merged with United in 2010. Star’s share in Newark soars well above SkyTeam's dominating 30.9% share at JFK. 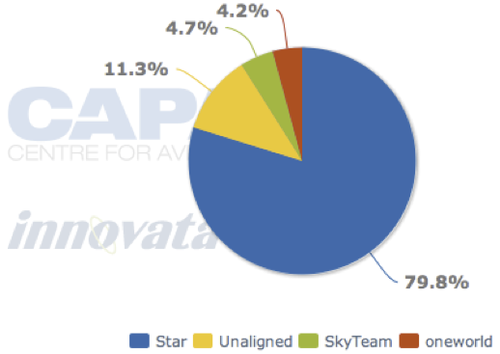 An advantage United likely has in its established flights from Newark is a well-developed corporate traveller base dependent on United's loyalty programme. Delta could face challenges luring those passengers away from United, who may easily opt to travel the 25km from Newark to midtown Manhattan to continue to build up their loyalty miles.

Interestingly, in some of Delta’s initial new markets from LaGuardia it is operating similar-gauged aircraft to United’s offering from Newark.

Based on current schedules on United’s website for a 26-Mar-2012 departure from Newark and a 28-Mar-2012 return, in Burlington Delta is operating 70-seat CRJ700s and 50-seat ERJ-145s. United operates ERJ-145s and 70-seat Bombardier Q400s on its Newark-Burlington flights. Delta offers a two-class cabin on its 70-seat plus regional jets, while United has planned a retrofit of its Q400 in two-class configuration this year.

Both Delta and United will operate ERJ-145s from LaGuardia and Newark to Dayton, Ohio; Greensboro, North Carolina; Louisville, Kentucky; and Richmond, Virginia.

Delta is operating two-class CRJ900s on flights from LaGuardia to Buffalo while United on its flights from Newark flies a mix of 70-seat Q400s, 50-seat ERJ-145s, 37-seat Bombardier Dash 8 200s and 50-seat Dash 8 300s. Delta is operating its new LaGuardia-Norfolk flights with ERJ-145s while United operates Q400s and ERJ-145s from Newark to Norfolk.

On its flights between Manchester and LaGuardia, Delta is operating ERJ-145s, compared with 37 and 50-seat Dash 200s/300s offered by United from Newark. United only offers Dash 200/300 service from Newark to Rochester and Syracuse while Delta is operating two-class CRJ700s and ERJ-145s from LaGuardia to Syracuse and CRJ700s on its flights to Rochester.

For many of the flights Delta is introducing from LaGuardia in Jul-2012, the carrier is using larger-gauge aircraft than United, with the exception of Halifax, Ottawa and Greenville, where each carrier is operating ERJ-145s from LaGuardia and Newark. Both carriers are operating the same gauge equipment on flights to Portland – Delta with its two-class CRJ-700s and United with 70-seat Q400s. United is offering a mix of CRJ-200s, ERJ-145s and Q400s on flights to Montreal, while Delta is using ERJ-145s on its LaGuardia-Montreal pairing.

Delta is also operating larger two-class CRJ-900s/Embraer 170s on its new LaGuardia-Milwaukee service and MD-88s to Minneapolis. United is operating ERJ-145s in both of those markets. In Pittsburgh, United operates a mix of 70-seat Q400s and ERJ-145s, while Delta is placing two-class Embraer 175s and CRJ-900s on its LaGuardia-Pittsburgh flights.

On flights from Newark to its Cleveland hub United offers larger-gauge equipment than Delta – 737-500s/700s compared with ERJ-145s flown by its new competitor. United through US Airways operates 737s and A321s from Charlotte operated by US Airways compared with two-class CRJ-700s operated by Delta. Both carriers are operating narrowbodies from LaGuardia and Newark to Denver.

Delta has concluded its huge spend in New York, which also includes a USD65 million payment to US Airways for the LaGuardia slots, is worth the investment to leap over American and intensify competition with United.

But United is preparing for the fight, assuring its market share in New York remains steady. However, the carrier has stressed that its sales force is engaging customers, touting its comprehensive network offerings from New York and the fact that it is the only airline in New York which has a “true connecting hub”.