After battling a third wave of COVD-19, Colombia is showing signs of a rebound as cases begin to stabilise and a busier travel season is approaching.

Before the latest wave, Colombia’s recovery was on par with other markets that were rebounding faster, including Mexico and Brazil, the latter of which was also dragged down by a second wave of COVID-19 spread.

Over the long term, competition in Colombia will intensify as incumbent airlines work to position themselves favourably, and potential new entrants emerge.

After a promising period of recovery near the end of 2020, Colombia began battling a third wave of coronavirus infections in early 2021.

Speaking at the recent CAPA Live June event, Viva CEO Felix Antelo explained that in Mar-2021 the company had deployed 20% more seats compared with the same period in 2019. “We had the fastest recovery in Colombia as a company”, Mr Antelo said.

The Colombian market as a whole regained 70% to 75% of its pre-pandemic size in March, Mr Antelo explained. “And that was only again surpassed by Mexico, by Brazil in some months.”

But at the beginning of Apr-2021 a third wave stalled demand, and although “no one saw that coming”, Mr Antelo said that Viva had moved quickly to cancel flights on routes where the company could not pay variable costs.

Other decisive actions Viva took included going out into the market “to try and stimulate”, Mr Antelo said. The airline also shifted some seats from the domestic to international markets, mainly to the US. Mr Antelo explained that Viva had worked fast to deploy seats to Miami for customers that were getting vaccinated in the US.

At the end of Apr-2021 and the beginning of May-2021 trends were improving, but then social unrest emerged in Colombia. But in mid May-2021 COVID-19 case counts stabilised and social demonstrations eased, Mr Antelo said.

“We still have a lot of work to do as a country here in Colombia to get back to normality”, Mr Antelo said. “But we are now in a way better place than what we were three or four weeks ago.”

Colombia is entering a high season in Jul-2021 and Aug-2021, and with a more stable COVID-19 and more stable political situation, demand is starting to pick up for domestic and international markets, Mr Antelo said.

Viva’s CEO stated that Colombia was getting back on a “very strong recovery line...for the second half of 2021, and in general for 2022. We are really bullish of what we think is going to happen”, Mr Antelo said.

Data from CAPA and OAG show that Colombia’s system seat deployment is projected to grow steadily for the remainder of 2021, fuelled by Viva’s growth, as well as service resumptions by Colombia’s other airlines. 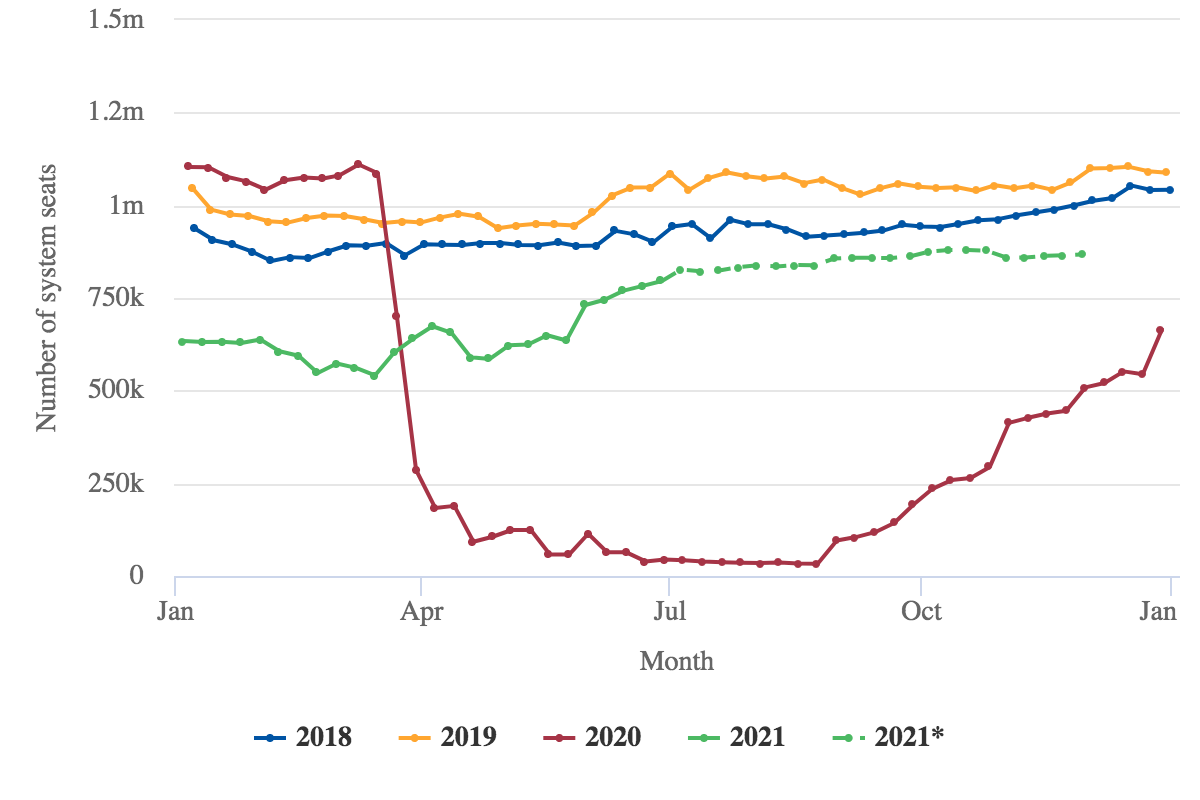 LATAM Airlines Group has previously stated that Colombia was a great opportunity for the company. Before the coronavirus pandemic, LATAM was making a push in the country, particularly among business travellers.

More recently, LATAM Airlines Colombia has announced that is growing frequencies on some routes from Cali and Medellín, and is also adding new service from Medellín to Cúcuta and Bucaramanga. The airline has declared that its seat deployment in Colombia should reach 2019 levels in Jul-2021. LATAM has stated that it plans to add three Airbus A320s to its Colombian operations.

Colombia’s largest airline, Avianca, is the midst of adding back numerous international routes and increasing capacity by 13% on 26 domestic routes. Some of the capacity additions are featured on point-to-point routes outside its Bogotá hub.

Additionally, the Chilean ULCC JetSMART has also increased its flight frequencies on its routes from Chile to Colombia, and aims to launch new Santiago-Medellín service in Jul-2021.

Is there room for a second ULCC in Colombia? Ultra Air seems to think so

Another ULCC with aspirations to launch in Colombia’s domestic market, Ultra Air, has reportedly finalised an agreement to lease Airbus A320s and launch flights by the end of 2021.

Although Colombia holds much promise, whether the country can support another low cost airline is untested, particularly at a time when LATAM and Avianca will emerge from their respective Chapter 11 restructurings as much leaner entities.

At the same time, those airlines are also adding more point-to-point routes domestically (see above), which could set the stage for a tough uphill climb for start-ups.

But Ultra is not the only start-up attempting to capitalise on opportunities created by the COVID-19 crisis, and the airline believes there are gaps in the market place it can fill.

Airlines are setting the stage for fierce competition in Colombia

There is still a lot unknown on just how much Colombia’s aviation landscape will change once a full recovery gets under way. But as it stands now, existing and new entrants appear to be positioning themselves to compete fiercely in a market that was Latin America’s third largest before the coronavirus pandemic.