After two years of competing aggressively with the nation’s growing high-speed rail network, Chinese airlines are beginning to adopt a different approach: 'if you can't beat them, join them'. Mutually beneficial solutions are emerging in the form of air-rail codeshare agreements that could pave the way for foreign airlines to also tap into China's vast interior even with a single gateway. China Eastern Airlines and Hainan Airlines are taking the lead, with the recent agreement between China Eastern and the Shanghai Railway Bureau and between Hainan Airlines and Yuehai Railway.

The moves are changing the relationship between airlines and rail, following a model successfully introduced in the European market. Using rail operations as an alternative to some short-haul feeder services will enable airlines to concentrate on longer routes (including international sectors), which is a key pillar of China’s aviation policy, while also enabling airlines to enhance their feeder traffic rather than losing this market to rail operators altogether. Direct rail links also increase airport (and airline) catchment areas for passengers that can allow them to be more competitive.

The global use of air-rail intermodal agreements has expanded in recent decades, mostly in Europe. These agreements offer a number of potential advantages for airlines, rail operators, intermodal airports and consumers and the arrangements generally enjoy regulatory support. Unlike cooperative agreements and alliances between airlines, which have attracted significant antitrust scrutiny, there has to date been no opposition by competition authorities in examining the competitive effects of intermodal agreements.

Airports, especially intermodal airports, are key to the interface between the two transportation industries. More than 130 airports around the world now have a direct link to a rail network or to a high-speed rail network, with the large number of airports in China currently under construction being developed with suitable inter-model transportation hubs to support this model. These rail links allow passengers to substitute short-haul air services for trains for some segments of their journey, and allow airports to better manage slot capacities when facing congestion, a key concern in many of China’s larger hubs.

The air-railway combination among four cities (Suzhou, Wuxi, Changzhou and Ningbo) and two airports (Shanghai Hongqiao Airport and Shanghai Pudong Airport) will be realised first while links from China Eastern's flights in three provinces and one city (Anhui, Jiangsu, Zhejiang Provinces and Shanghai) under the Shanghai Railway Bureau will be "gradually realised". "The joint ticket price is about half of the total cost of a flight and railway tickets," China Eastern Airlines senior manager marketing Zhang Chi said.

The Shanghai Railway Bureau operates 22 routes per day between Shanghai and the four neighbouring cities to link with around 900 daily China Eastern flights. China Eastern said more railway routes linking Shanghai's neighbouring provinces of Jiangsu, Zhejiang and Anhui will be added to the joint service soon, which will result in reduced dwell times for passengers.

Hainan Airlines deputy GM and sales Yuan Huifang said joint ticketing can help both sides get more passengers. It is a way for airlines to profit from the HSR system, which has had a negative impact on airline bottom-lines.  "High-speed rail services heavily affect the business of flights of less than 500km. But we want to find a way to cooperate with rail systems,” he said.

Hainan Airlines manager for product development Wang Yue however noted the process is not without its challenges, especially given the infancy of the system. Hainan Airlines took almost one year to prepare for the programme, with the two parties facing challenges in combining two different ticketing systems. Challenges have also been faced in linking up transfers. For that reason, Hainan Airlines will promote the programme more heavily in international destinations rather than adding more domestic cities, Ms Wang said. However, she noted that new airport development is increasing focused on inter-modal connectivity. "I believe more railway stations and airports will be built together for joint operations," he added.

High-speed rail is rapidly becoming a pillar of China’s transportation network. Local airlines that have prospered through years of strong demand growth and a lack of effective ground transport alternatives are now being challenged by this new form of competition, which is also heavily supported and promoted by the government. China's high-speed rail service has already had an adverse effect on airlines' domestic business, particularly on sectors of less than 500km.

At more than 8300km, the burgeoning high-speed rail network was already the world’s most extensive by the end of 2010, with as much of 3500km of new high-speed rail lines to be constructed in 2012. By 2015, China’s high-speed rail network will span 25,000km. The four main north-south routes, including between Beijing and Guangzhou, will be completed in 2012, according to People’s Daily, meaning further competition is expected with the domestic air travel network in 2013 and onwards.

Some estimates put the loss in revenue for China’s aviation industry from the HSR, from reduced traffic and price pressure, at up to 3-4% of total revenues. CAAC director general Li Jiaxiang has said some 50% of flights less than 500km in length and about 20% of flights between 800km and 1000km could become unprofitable as a result of HSR competition. Sectors above 1500km are not likely to be threatened.

Meanwhile, the five airports in China’s Pearl River Delta region met in May-2012 and forecast the development of the Pearl River Delta high-speed rail network will take away four million air passengers from airlines between 2011 and 2015. Guangdong Provincial Airport Group chairman Lu Yesheng, following the opening of the Wuhan-Guangzhou HSR link in 2009, stated the number of services between the two cities declined by 80%. Shenzhen Airport estimates HSR has reduced passenger numbers by up to 600,000 p/a. 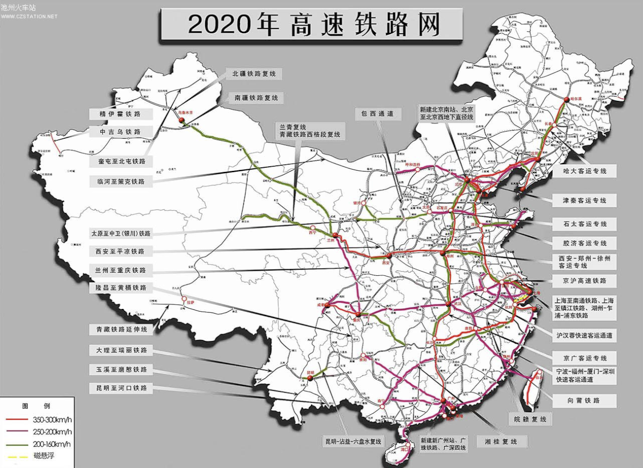 Further adding to the airlines’ woes is that the HSR routes are also some of the most profitable for China’s airlines, such as the Beijing-Shanghai sector, which witnessed the implementation of a USD33 billion HSR link in Jun-2011. All three of the major state-owned airlines have cited high-speed rail as a major factor affecting their load factors and earnings and are now seeking a way forward.

The leader in the field of rail-speed cooperation is Deutsche Bahn. With its Rail&Fly product, which acts an an interline agreement of sorts between Deutsche Bahn and its airline partners, the rail provides operates codeshares with over 70 airlines. It offers rail services from/to 16 airports (Basel, Berlin-Schönefeld, Berlin-Tegel, Bremen, Dortmund, Dresden, Düsseldorf, Frankfurt, Hamburg, Hannover, Leipzig-Halle, Köln-Bonn, München, Münster-Osnabrück, Nürnberg and Stuttgart to/from the entire DB rail network, covering approximately 34,000km of track and over 500 routes. 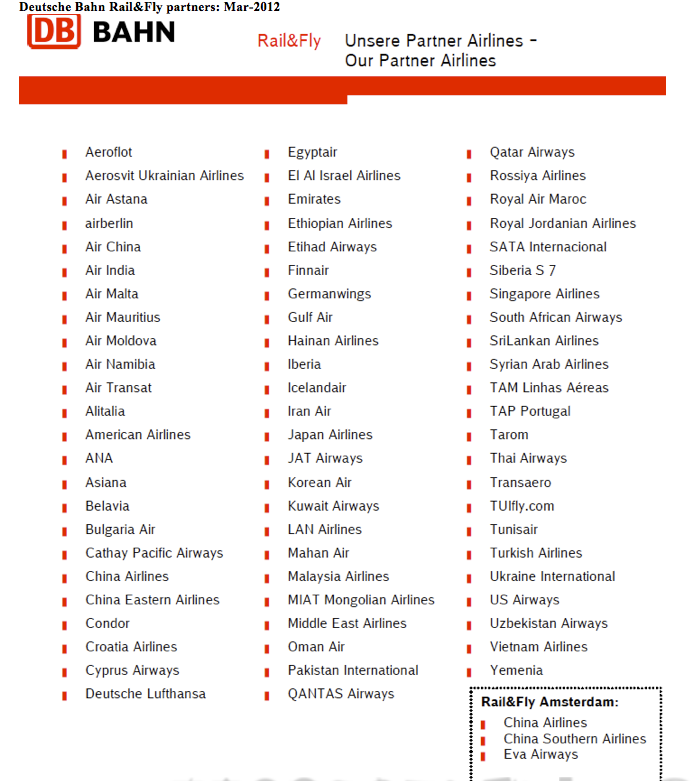 Deutsche Bahn and Lufthana also have an AIRail product, covering travel cfrom the centre of Cologne (via Siegburg/Bonn) or Stuttgart with the ICE (Inter City Express) to Frankfurt Airport, and vice versa. The timed coordination of the trains with Lufthansa flights means that transfer times between train and aircraft are minimal. At the start of the journey with AIRail, passengers can check in for both the train journey and the connecting flight in advance. This JV has a higher level of cooperations, for example, with baggage checkin, a baggage collection serve taking baggage from the exclusive AIRail baggage reclaim through customs, a free porter service between the twoo modes of transportation and  seat reservation in a specific Lufthansa Business or Economy Class allocated seating area as well as personal assistance from a Lufthansa AIRail guard.

Jet Airways in Nov-2011 also announced its alliance with Thalys rail network to connect its passengers from Brussels to Paris CDG via rail service. The first air-rail code service of the airline started on 30-Oct-2011 from Chennai, Mumbai and Delhi.  Jet Airways became the first Indian airline offering such an international air-rail combination service. Other carriers which have an agreement with Thalys include American Airlines, with SkyTeam also signing a codeshare agreement with Thalys for rail service connecting its hub Amsterdam Schiphol Airport with Antwerp-Centraal and Bruxelles Midi/Brussel Zuid. 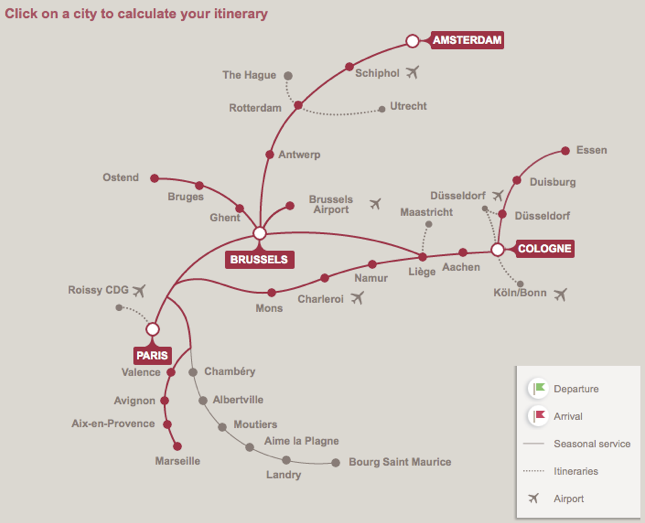 Elsewhere in Asia, China Airlines has a cooperation agreement with Taiwan High Speed Rail, with the carrier in Dec-2009 becoming the first airline to establish a check-in counter at the HSR Taoyuan Station. The carrier also provides a discount for passengers purchasing flight-HSR tickets.

The scope for air-rail cooperation in China, in the form of both interline or codeshare agreements, is high. It can enable carriers to increase their market share on international routes by giving them access to a wider network, while also protecting market share amid rising competition from rail operators.

It also enables airlines, including foreign airlines with only one or a handful of Chinese gateways, to access the rail operators' network and to optimise their offer on particular routes, gaining feed and transfer traffic. As competition on the domestic China market intensifies, an air-rail agreement can also substitute short-haul services that are becoming unprofitable in light of HSR competition, enabling carriers to instead focus on more profitable longer sectors. The rail agreements being introduced by Hainan Airlines and China Eastern are just the start.