'Luck' may be in its name but Chinese carrier Lucky Air is not leaving its future entirely to fate. The Kunming-based carrier is expected to transition to the low-cost model, following the Chinese government's rapid rise in LCC interest.

With a southwestern base and route network concentrated on secondary cities, fare premiums are hard to attain. Lucky Air hopes to differentiate itself in China's often dated and monotonous airline branding, and so has introduced a new logo, becoming the latest HNA-affiliated airline to re-brand.

Lucky Air is one of two Chinese carriers granted international traffic rights at Kunming and there is the prospect for further international growth, mostly to South and Southeast Asia. If it is to be serious about addressing costs, Lucky Air will need to look at its fleet, a mix of 737s and A320s. Its 26 aircraft fleet could grow to 70 by 2020, including possibly widebody aircraft within three years, the carrier announced at the Routes Asia forum in Kunming.

Lucky Air anticipates 20% annual growth through 2020, but if it is to reach its goal of having 70 aircraft by 2020, annual growth will have to be closer to 30% – multiples of even the most bullish growth forecasts for China. Such high and continued growth will consume many, if not most, resources.

As seen with other Chinese airlines, achieving high growth has come at the expense of smart growth and strategic developments. These can be harder to address (or correct) later when the size of airline is larger. However, many airlines remain focused on grabbing market share first. 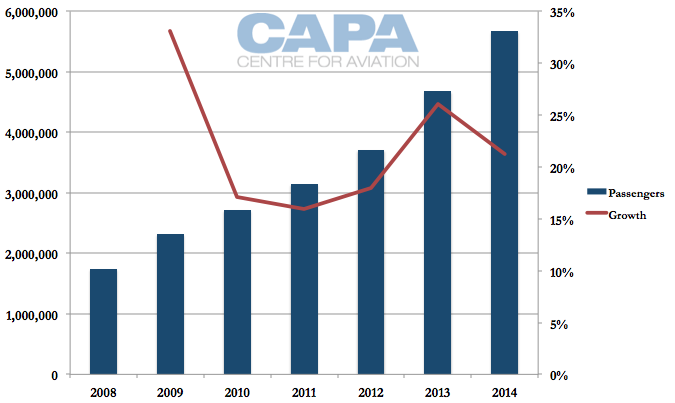 Lucky Air commenced operations in 2006 under its present name but was originally founded in 2004 as Shilin Airlines, named after a popular tourist attraction near Kunming, its home base. Lucky Air is partially owned by the expansive HNA Group and the Yunnan government under a joint venture.

Lucky currently accounts for a 1.8% share of domestic seat capacity in China, according to CAPA and OAG data. Lucky is categorised by CAPA and OAG as an LCC and therefore its capacity is currently included along with five other airlines in the approximately 10% LCC penetration rate for the Chinese domestic market. But Lucky does not yet consider itself to be an LCC or hybrid carrier.

Lucky Air is the second-largest airline at Kunming Airport after China Eastern, which has a hub in Kunming. China Eastern has a 42% share of seats in Mar-2015 while Lucky Air has a smaller 12% share. China Southern is not far behind with a 10.5% share. 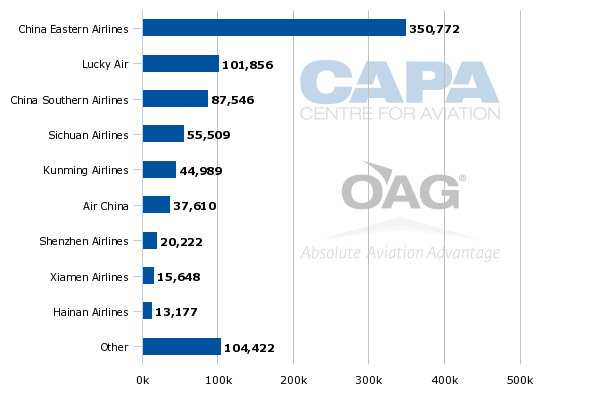 Kunming Airlines has 10 aircraft and in 2014 signed an agreement to acquire 10 more 737s, comprising four 737-700s and six 737 MAX aircraft. Kunming Airlines is growing closer to its parents, signing a codeshare agreement with Air China in 2014. Kunming Airlines said in a statement about the arrangement that it "will not only further expand our route networks, but also help us draw upon the experiences and expertise of other domestic fine airlines".

Ruili Airlines was one of the first China approved under its latest wave of liberalisation. Ruili launched services in May-2014 and currently has four 737s in service with a further 13 on order.

Lucky Air’s hub and largest presence is at Yunnan’s capital and largest city, Kunming. Lucky is developing a presence in Lijang (LJG on the chart below), a popular tourist spot in Yunnan, as well as in Chengdu in western China, potentially good for business. 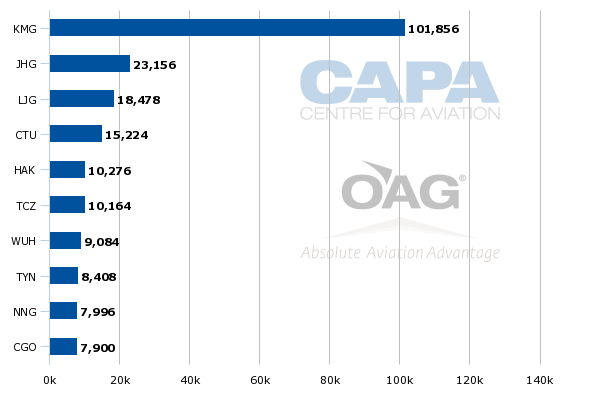 Lucky’s presence in Chengdu for now is complementary with sister HNA carrier West Air (a LCC) in Chongqing, near Chengdu. But West Air may see that it, not Lucky Air, is better for Chengdu.

Lijang may not be Lucky Air’s ideal base, but growth is important for the city and province, which even supports a Tigerair flight from Singapore. Chengdu meanwhile is important for growth given the large size and opportunity of the market, but Lucky Air lacks the government support it enjoys in Yunnan and has to fight to be able to expand.

Lucky Air is likely to transition to the LCC model

Ruili and Kunming Airlines follow China's generic airline model, which is full-service but light on frills and seldom attracting premium yields (or solid premium cabin load factors). Ruili Airlines has even commented it will not have a LCC pricing strategy (and presumably LCC business model). China’s previous one-size-fits-all approach is stale and there is opportunity for significant efficiency, such as through the low-cost model.

Lucky Air has not officially announced it will transition to a low-cost platform, but this is expected. Lucky is likely to pursue a hybrid approach although exact details are to be worked out. There are a number of airlines in China transitioning to a low-cost service approach and this will require market education about different aspects, ranging from checked luggage to buy-on-board food to service recovery in the event of delays/cancellation.

Even Spring Airlines, China’s LCC forerunner, has had to educate the market as it has changed. For example only in recent years has it charged for luggage. As Chinese consumers start to learn the difference between full-service and low-cost airlines, Lucky Air may be challenged to introduce a third type (hybrid).

Lucky Air is setting itself up for a low-cost model. Some aircraft are already in all-economy configurations while seven of its 11 routes from Chengdu stopped receiving free meal service from 19-Mar-2015. Meals and snacks are available from RMB20-45 (USD3.22-7.25) while non-alcoholic beverages are free.

Chinese airlines often provide one or maybe two meal choices (with the meal often just being a hot entree with no sides) alongside a light beverage selection. So the introduction of paid meal options will bring more choice, for a fee of course.

Looking at Lucky Air’s top 10 domestic destinations based on ASKs, most are secondary or tertiary cities and not in the east coast, where incomes are typically higher.

Jan-2015 saw a Lucky Air aircraft sport a new livery and logo, although the branding was not officially released until Mar-2015. Lucky’s old branding followed HNA’s branding matrix, with a red name and stylised object, in this case a bird for Lucky Air. The new branding however is a sharp departure: Lucky Air’s logo has been changed to depict an old seal featuring its name in Chinese characters while the font script has been refreshed. The “A” in Lucky Air features a stylised cloud, according to the carrier.

Although Lucky Air visually looked like other HNA carriers, from the start it was different from most other Chinese carriers in that it had a name (perhaps from an obscure genesis) not related to geography. The geographic naming favoured by Chinese airlines can become confusing when they expand and launch bases in other parts of the country. However, with local government often having an ownership stake in airlines, geographic naming is also a way to promote the home city.

Lucky Air’s new livery features a tail bearing a striking resemblance to the British Airways tail, albeit in different colours (red and gold rather than red and blue). Lucky Air says the tail matches the red and gold in the scarfs of its flight attendants. The livery also features the seal logo on the aircraft door with a pattern design along the length of the fuselage by the windows.

Further international growth is planned. South and Southeast Asia are most likely targets

Lucky Air is largely a domestic carrier and currently 98.5% of seats are in the domestic market. Lucky Air in 2014 commenced international operations, and currently serves three non-domestic routes, according to OAG data. These three routes comprise two to Thailand, Kunming-Krabi (three weekly) and Kunming-Koh Samui (three weekly), and one to Taiwan: Kunming-Taichung (twice weekly).

Lucky Air's first international route was in Jan-2014 to Singapore on a Kunming-Guiyang-Singapore routing served twice weekly. Lucky Air ended the service in Sep-2014, according to OAG data. 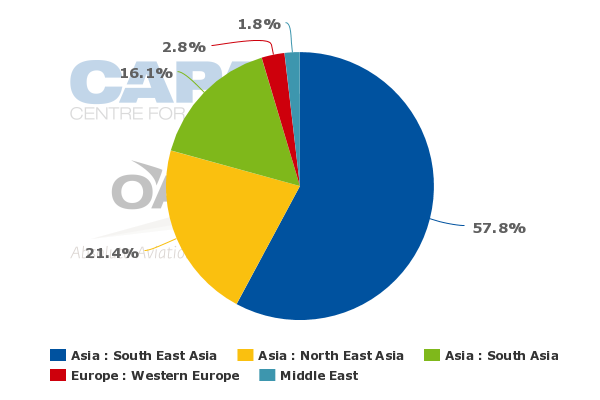 North Asia is a larger market from Kunming than South Asia. South Asia-China ties are under-developed and there is opportunity for growth although South Asia will not have the tourism demand of Southeast Asia or North Asia. Thailand, a popular tourism destination globally and in China, is the largest country market from Southeast Asia.

China Eastern in northern summer 2015 will add flights from Kunming to three Thai destinations: Bangkok, Chiang Mai and Phuket. China Eastern is the only other Chinese carrier allowed to serve international destinations from Kunming. For Lucky Air, international flights can bring higher yields at peak periods but year-round sustainability could be challenging, especially where there is overlap with foreign LCCs.

The designation for foreign service may see the favour requested to be returned, such as by serving markets strategically important to Kunming and Yunnan but perhaps lacking financial viability. Kunming is eager to promote itself as a transit hub to Southeast Asia and South Asia, including from long-haul markets. Lucky Air can help with China-South/Southeast Asia connections. It is interested in this market but knows it is for now small and there needs to be government support for making the transfer process easier. 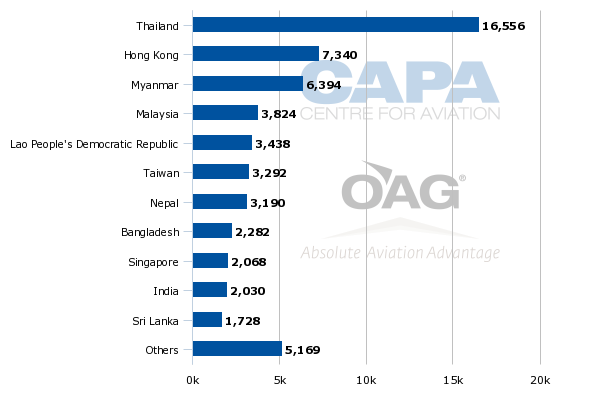 Lucky Air currently operates 26 aircraft, according to the CAPA Fleet Database. Lucky Air could more than double (nearly triple) this over the next five years by operating up to 70 aircraft at the end of 2020. Some of these aircraft could be widebodies and Lucky Air hopes to introduce unspecified variants in about three years.

There is much pride in operating widebody aircraft. Only a handful of China’s numerous airlines operate widebody aircraft, but success – financial returns – are highly mixed. It is unlikely Lucky Air in the medium-term could find many international routes that could deliver an annual return.

Widebody aircraft are bigger, and so too can be the losses. Lucky Air’s 26 aircraft comprise seven A320 family aircraft and 19 737NG aircraft. Two different family types and four variants is hardly an efficient fleet for any small airline, let alone a LCC.

Lucky Air is not publicly remarking on the future direction of its fleet, but there are likely private plans to bring efficiency.

Which fleet type will stay? Lucky’s A320 family aircraft are on average younger, but Lucky also has new 737s that even have Boeing’s new Sky Interior. Its first aircraft to feature the new livery was an Airbus. 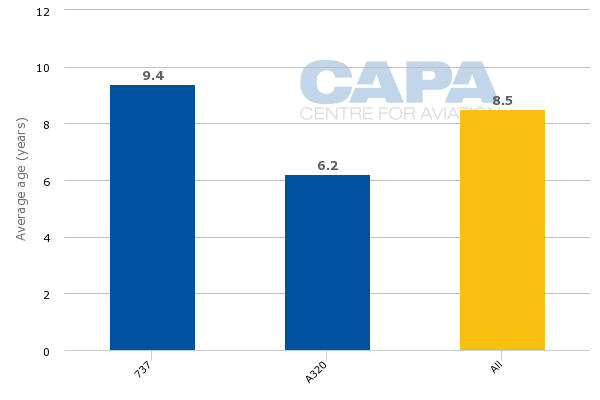 There are considerable developments in Kunming with new carrier Ruili Airlines, Kunming Airlines seeking the scale of sister airline Air China and Lucky Air considering a different business model. This is in addition to China Eastern working to maintain its grip on the market. A low-cost approach could help Lucky Air differentiate itself in a crowded market. If there is solid implementation and passenger reception, there can also be better returns.

The LCC model is still nascent in China and achieving efficieincies other markets have will not be possible. Utilisation is a challenge given airspace congestion and prohibition on domestic red-eye flights. Red-eyes are permitted internationally, and Lucky Air could look to boost utilisation through back-of-the-clock international flying.

But low-cost is ultimately about differentiation not with Ryanair but peers, and there is much inefficiency in the Chinese full-service segment. Lucky Air will need to demonstrate a comparatively lower cost base but also for the market to understand exactly what Lucky will become.

Domestic flying will remain its core with international supplementary, even if Lucky and China Eastern retain exclusivity. Widebody aircraft may be a jump too big, as has occurred with larger domestic carriers Sichuan Airlines and Xiamen Airlines.

In Chinese airlines, even private ones, there is much not within the control of the airline. As it turns out, Lucky Air may need the good vibes in its name. Fingers crossed.