China is uniquely well placed to lead the global transformation in air traffic management, at least according to Boeing. Boeing Commercial Airplane’s vice president of Air Traffic Management, Neil Planzer, has forwarded the opinion that as China is neither burdened by the fragmentation that characterises EU airspace or the dated infrastructure of the US it has “the opportunity to demonstrate strong leadership and create transformational system design, development and implementation through its five year planning cycle”.

Mr Planzer’s comments were made at the 2011 China Civil Aviation Development Forum. At the same event, the US Federal Aviation Administration’s Deputy Administrator, Michael Huerta, delivered a speech that stressed the ties in air traffic management between the two countries. According to Mr Huerta, there is an “obligation” for the US and China – the two largest single nation air travel markets – to work together to ensure that both countries efforts in aviation modernisation are mutually compatible.

Interoperability is already a key concept in the development of NextGen in the US and SESAR, the technological programme underpinning the development of the Single European Sky. Under the auspices of ICAO, rules and standards have been developed – and continue to be developed – to ensure that the new generation of satellite based navigation systems also in development in China, India, Japan and Russia are all compatible with each other.

While not burdened with the issues facing the US or Europe, the Chinese aviation system is not exactly a blank slate. In 2010 Chinese airlines flew 267 million passengers, and Chinese airspace handled almost 5 million aircraft movements.

Growth in China presents CAAC with problems not faced by authorities in the US or Europe, and China is also struggling with its own airspace issues. Commercial airlines passenger traffic in China increased 15.8% year-on-year in 2010 and is forecast to grow at a rate of 11-13% p/a over the next five years.

In comparison, European airline traffic grew around 4.6% last year, while US traffic was up only 1.4%. The FAA forecasts US passenger domestic traffic will increase at 2.8% p/a over the next five years, while international traffic will increase by 5% p/a. The US commercial airline fleet is expected to expand at just 1.8% p/a, around 150 new aircraft per year. The commercial aircraft fleet shrank by 430 aircraft over the past two years, to around 7150.

One of China’s primary concerns is opening its airspace up for use by commercial carriers and private aircraft, establishing more airspace corridors and freeing up new and more direct routes. China is also dealing with an air traffic controller shortage – a worldwide phenomenon – to help in redressing the imbalance between military and civilian control. Less than 30% of airspace is open to civil aviation, a situation the Chinese military establishment is coming under increasing pressure to remedy.

Air traffic congestion is a problem, particularly at key airports. CAAC is redesigning local area airspace at dozens of airports to deal with increasing levels of traffic and limited airspace. To relieve some of the problems, 56 new airports are due to open in the country over the next five years. 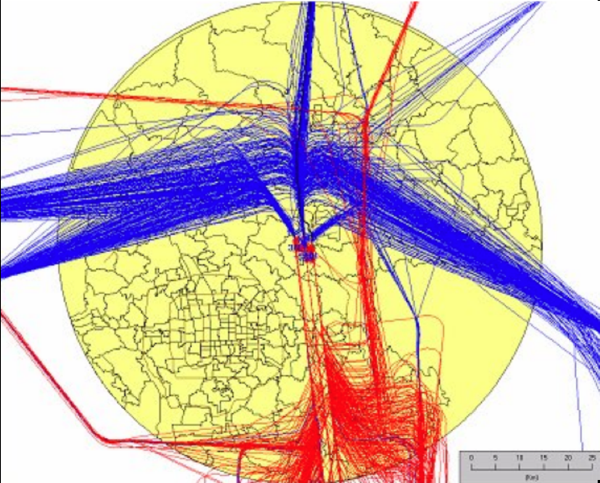 CAAC expects the Chinese commercial aircraft fleet will nearly double by 2015, from around 2800 aircraft now to 4800-5000 by the end of 2015. Boeing forecasts are somewhat little less ambitious: it estimates that Chinese airlines will take delivery of 4300 aircraft over the next 20 years. Bombardier expects that over the next two decades China will displace Europe as the second most important market for commercial aircraft, behind the US.

While the growth in commercial aviation is significant, it is the private aviation sector that has to potential to undergo a revolutionary transformation in China. Private aircraft ownership is still heavily limited in China, and the airspace controls and policy necessary for full development of the sector are not yet in place.

Chinese aviation regulations require that aircraft flying above 1000m and below 4000m to file a flight plan, which can take up to a week to be approved. Reports of uncleared and undeclared low-altitude flights are increasingly common, unsurprising given that the fees for flight approvals can be higher than the fines for illegal flights.

The bottlenecks on China’s low altitude airspace are set to be progressively widened over the next five years. Trials permitting helicopters to operate in low-altitude airspace over Haikou, the capital city of China's southern island province of Hainan, were launched in early 2011. The aim of the testing is to validate the CAAC’s plans to gradually open up China’s airspace to private aircraft.

Before the end of 2011, similar pilot programmes will test open low-altitude operation general aviation in Changchun, Guangzhou, Shenyang, Zhuhai and Xinjiang. This will then be expanded to other major cities, including Lanzhou and Beijing, between 2012 and 2015. From there, Chinese authorities will review the system, aiming to improve the management and infrastructure for low altitude aviation, before embarking on another expansion of the system between 2016 and 2020.

Flight delays, an increasing problem at major Chinese airports, are also contributing to the growth of business aviation. The CAAC expects growth of general aviation traffic to grow at 15% p/a between now and 2020, an estimate that it admits is conservative.

An indication of just how seriously China is taking the development of its general aviation sector is the proposed takeover of US small aircraft maker Cirrus Aviation by China Aviation Industry General Aircraft (AVIC), a unit of the giant state-owned China Aviation Industry Corp aerospace consortium. The USD210 million deal will be reviewed by the US Committee on Foreign Investment.

AVIC is also working with US Aerospace Ltd on helicopter development. In turn, US firms are among the leading contractors in China’s attempts to develop its own commercial aircraft, notably the ARJ-21 and C919.

Now is the time

As satellite-based air traffic management matures and China’s aviation sector grows, CAAC has recognised that now is the time to transition to the new technology. China is already developing the Satellite Navigation Augmentation System (SNAS), a satellite-based augmentation system similar to WAAS in the US and EGNOS in Europe.

China is already moving forward with adoption of new ATM technology. In Mar-2010, CAAC issued its guidelines for the use of RNP in approach and terminal areas. Since 2009, CAAC has accelerated the application of performance-based navigation (PBN) technology, with full-scale implementation work now underway in the context of China’s latest Five-Year Plan. Ultimately, China aims to implement PBN by 2025, a timeframe that will make it one of the global leaders in the transformation of ATM technology.