All Nippon Airways (ANA) led Asian airline stocks lower yesterday, falling 3%, yesterday as President, Shinichiro Ito, called for the disclosure of information on how Japan Airlines (JAL) will use the public funds it has received as part of its bankruptcy filing and restructuring efforts.

Mr Ito also warned that JAL’s planned use of government-backed funds to upgrade its ageing fleet and enact fare reductions would undermine fair competition in the aviation industry, adding that ANA also shares "the sense of crisis" as it competes in the same market as JAL. JAL Chairman, Kazuo Inamori, has confirmed that the carrier plans to use part of the public funds to move to smaller-sized, fuel-efficient aircraft while it works to maintain its struggling international operations.

Cathay Pacific’s shares fell 1% as over 800 flight attendants staged a protest against a change in roster policy that restricts shift swapping by flight attendants. CEO, Tony Tyler, meanwhile stated the carrier plans to expand its services to Mainland China by increasing frequencies and launching new routes. He told the China Daily, “we will continue to grow our business on the Mainland mainly through Dragonair, to link all the key cities on the Mainland with our international network in Hong Kong". He added the recent cargo JV with Air China signifies a “significant step” for the company to expand Mainland services. 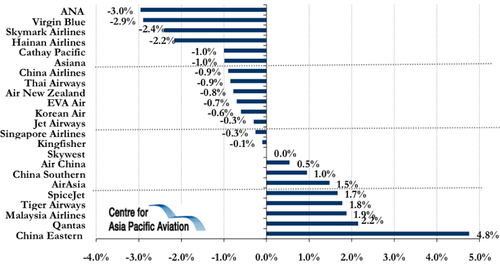