Shares in Taiwan’s China Airlines remained stable yesterday, with EVA Air’s shares falling 0.7%, despite the carriers reporting their first cargo yield improvements in 11 months in Nov-2009 (up 2.6% and 1.8%, respectively).

Qantas’ shares surged 5.1% yesterday, rising the most in six months in Sydney trading, after the carrier stated it expects to report profit before tax in the AUD50-150 million (USD44-133 million) range in the six months ending 31-Dec-2009, following recent improvements in passenger numbers and yields. See related report: Qantas expects AUD50-150 million profit in 1HFY2009/2010; Yields on the improve in Nov-2009

Singapore Airlines’ shares gained 0.3%, after a draft prospectus revealed that the airline and state investor, Temasek Holding, would not sell their shares in Tiger Airways in its planned IPO. Indigo, which currently has a 24% stake in the carrier, will divest part of its stake through the sale, while RyanAsia Ltd plans to decrease its stake if an over-allotment option is conducted.

The LCC has lodged a preliminary prospectus with the Monetary Authority of Singapore regarding its plans to launch an IPO, to acquire funding for its USD4.8 billion aircraft order for 66 A320s.

ANA announced an order for five B777-200ER (for delivery between Apr-2012 and Mar-2014) and five B767-300ER aircraft (for delivery between Apr-2010 and Mar-2012). The carrier’s President, Shinichiro Ito, confirmed ANA and its Star Alliance partners, United Airlines and Continental Airlines, would file for antitrust immunity with US authorities this week.

Subsequent to the close of the stock market yesterday, SpiceJet CEO, Sanjay Aggarwal, stated 3QFY2009/10 (Oct-2009 to Dec-2009) is expected to be the “best quarter for the Indian aviation industry in terms of demand”, following improvements in Oct-2009 and Nov-2009.

Despite this, shares in India’s listed airlines, Kingfisher, SpiceJet and Jet Airways, were all weaker yesterday, down 2.2%, 1.7% and 1.3%, respectively. 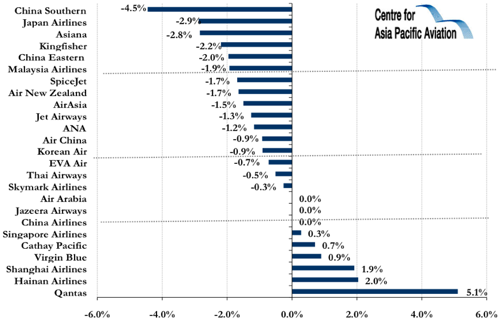