Challenging times ahead for easyJet, but a better-than-expected start to 2009

Outgoing easyJet Chairman, Sir Colin Chandler, in his 2009 AGM Chairman’s Statement on 05-Feb-09, warned that the European economy is in a “challenging recession of an uncertain length and depth [and] many commentators are suggesting that this could be the worst economic conditions of a generation”. Despite this, Sir Colin stated easyJet’s start to 2009 has been “better than we expected”.

According to Sir Colin, in the current economic climate there is a "flight to value with European consumers choosing our great value pricing and the attractiveness of our network serving primary airports". This echoes CEO Andy Harrison's previous remarks that the carrier is "seeing business travelers and long haul leisure travelers switching to easyJet in search of better value". Mr Harrison added that the LCC expects to improve its average yield by approximately 5% over 2009 as part of this "flight to value".

Capacity reduction in 2Q09, but growth in 1H09: According to easyJet, 2Q09 capacity (ASKs) will be down 4% year-on-year (with a 7% reduction by competitors on easyJet routes), with an initial indication of a 4-5% reduction in European short-haul capacity for Summer 2009.

During 1H09, capacity is expected to be ahead of FY08 levels, by low single digit percent, with continued focus on growth from market opportunities at London Gatwick and in mainland Europe. Supply to the European short haul market by all airlines in general is expected to continue to contract over the European Summer by 4% to 5%.

The easyJet Chairman also stated the LCC is considering scaling back its fleet growth plans and adopt a "cautious approach" to growth, if economic conditions continue to worsen through 2009. The carrier stated its primary focus in the current environment is on maintaining a strong balance sheet, with the Board to continue to monitor capital expenditure plans. This more cautious mood from the carrier's Board reflects the recent agitations of easyJet founder and largest shareholder, Sir Stelios Haji-Ioannou.

Sir Stelios recenty reiterated he remains "worried" about how the carrier would handle the upcoming Summer season, due to the increasingly uncertain economic environment. Stelios has also continued to argue that easyJet should remain cautious and keep its fleet size at 170 aircraft.

The airline's management and Stelios have been at loggerheads over its expansionist strategy in the current shrinking air travel market. Stelios is especially concerned about the Group's order for 101 new A320 aircraft, worth USD5.1 billion at list prices. Accordingly, Stelios is continuing to stress the need for the carrier to renegotiate its existing orders for new Airbus aircraft in order to defer more deliveries into the future, urging the group to exercise "careful cash management and in particular more prudent capital expenditure". Stelios argued easyJet was basing its aircraft decisions on "optimistic assumptions about future revenues". He stated that "maintaining a flexible approach to the future size of the aircraft fleet over and above the 170 aircraft we have today will be key to continuing this good performance".

The LCC plans to continue to dispose of the aircraft held for sale at the year end, but stated "there are no assurances that this will happen before the end of the current financial year, given the current macro climate". The Board stated the carrier's current fleet plan for 2010 of 185 aircraft and 2011 of 197 aircraft may change if the macro environment worsens in the next 3 to 6 months and given the lead-time for building aircraft.

Revenue growth ahead of expectations/expects to be profitable in FY09: Revenue growth in 1Q09 (+31.5% to GBP550 million) was ahead of expectations and driven by strong performance across the carrier's network, an impressive 82.9% ancillary revenue growth (to represent 19.1% of total revenue), a superior load factor performance and success in attracting higher-yield business passengers, which, according to Mr Harrison is "more than compensating for some softness in discretionary travel".

The carrier continues to discount heavily at the lower end of the market. Most recently, easyJet launched a promotion (valid for bookings made between 30-Jan-09 and 03-Feb-09) offering 25% off every seat across its route network for travel between 04-Feb-09 and 15-Jul-09. The carrier previously launched it "biggest ever sale" on 09-Jan-09, offering "up to 25% off every seat, every route, every day, including Half-Term and Easter" between 01-Mar-09 and 30-Jun-08, resulting in fare reductions on 16 million seats for early Summer travel.

easyJet anticipates total revenue per flown seat for 2Q09 to be slightly ahead of the prior year on a constant currency basis, even despite Easter falling in April (3Q09), compared to 2Q in 2008. 1H09 revenues are expected to be ahead of previous guidance, although the unit revenue outlook for the European Summer remains uncertain. Consequently, easyJet reiterates its guidance that, for the full year at current fuel and exchange rates, the carrier expects to be profitable.

Cost per seat to increase: Costs per seat (excluding fuel) remain in line with previous guidance for 1H09, up mid-to-high single digits on a constant currency basis. Pre-tax margins in 1H09 will be impacted by higher fuel costs and will decline year-on-year. Based on current estimations, easyJet anticipates 1H09 fuel costs to be approximately GBP3.60 per seat higher than 2008 levels, while 2H09 unit fuel costs are expected to be broadly in line with 2008 levels. There is no change to full year guidance on unit operating costs and thus FY09 unit operating costs ex fuel are expected to increase by a low single digit percentage at constant currency.

Some reprieve from lower jet fuel prices: Jet fuel prices have fallen from the high of USD1,400/tonne in Summer 2008 to around USD460 per tonne at spot prices. The carrier stated it expects to benefit from the reduction in fuel prices as the carrier's hedging positions are renewed at lower market prices. These benefits will be offset to some extent by the weakness of sterling against the USD.

easyJet currently has 73% of its 2009 fuel requirement hedged at an average price of USD1,094 per metric tonne. The LCC is financially strong with GBP801 million of cash and money market deposits on the balance sheet as at Dec-08.

Strong Mainland European bases: New mainland European bases are performing well, with the consequent 20% growth in non-UK originating passengers spreading the LCC's economic exposure. easyJet now has 51% of its customers originating from outside the UK compared to 43% in 1Q07 (contrasting for example with British Airways, which blames much of its 3Q and 4Q expected losses on the weakness of the Pound). 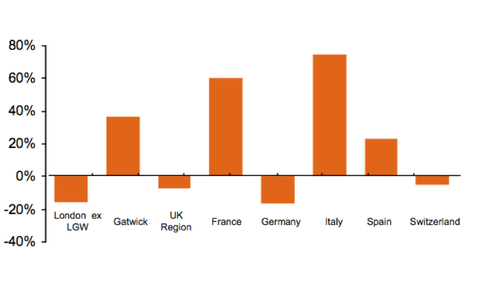 In network news, easyJet announced plans to launch 13 new services across its European route network in Summer-09, bringing the total number of routes to 416. Five of the new routes will operate from UK airports (predominantly London Gatwick).

Two weeks previously, easyJet announced plans to launch 14 new routes across Europe, of which nine routes will operate from regional destinations. As part of this expansion, easyJet will base an additional aircraft at Liverpool from 01-Jun-09 and at Manchester from 04-Aug-09.