Cebu Pacific stated it handled more than 2.8 million passengers in 1Q2011, marking growth of 12% year-on-year increase. Load factors averaged 87% for a 4ppt improvement. This result keeps the airline on track to achieving its 12 million-passenger target this year, which would be a 15% increase from the 10.46 million passengers handled in 2010.

Cebu Pacific attributed the growth in the first quarter to its “trademark low fares, the increasing number of passengers who avail of our affordable seat sales months in advance, and our extensive route network”. According to its website, Cebu Pacific has offered seven separate advertised seat sales in Apr-2011, 11 in Mar-2011, nine in Feb-2011 and eight in Jan-2011.

The carrier’s first quarter growth was predominantly driven by international traffic, which increased 32% year-on-year to 672,456 passengers. This occurred as flight frequency increased to key international markets, brought about by the additional capacity from the carrier’s new A320. The airline doubled its Manila-Incheon (Seoul) services, making it twice daily from Jan-2011. It also added three times weekly Manila-Bangkok service, for a 10 times weekly service from Feb-2011.

Cebu Pacific separately stated it remains optimistic about expansion in North Asia, especially with a passenger growth of 28% for its Greater China, Taiwan, Japan and South Korea routes in 1Q2011.

The carrier handled 381,513 passengers between North Asia and the Philippines in 1Q2011, compared with 298,485 passengers in 1Q2010. During the quarter, the carrier witnessed passenger growth of 73% in Taiwan, 30% in Japan, 31% in South Korea and 23% in Greater China, compared with the same period last year. The carrier operates 73 weekly services to Greater China, seven weekly services to Taipei, three times weekly to Osaka and 18 times weekly to South Korea.

In 2010, Cebu Pacific operated 13.9 block hours per day with 8.2 turns per day. The carrier reported traffic growth of 19.5% with an average load factor of 85.4%, international traffic growth of 37.9% and had a 51.6% domestic cargo market share. According to data released by the  Philippines Civil Aeronautica Board in Apr-2011, Cebu Pacific handled 2.1 million international passengers in 2010, for growth of 26.4%, behind Philippine Airlines with 3.9 million passengers (+14.7%). 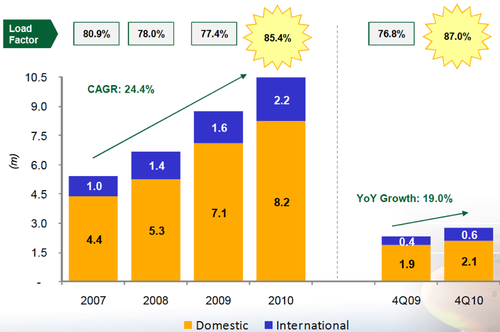 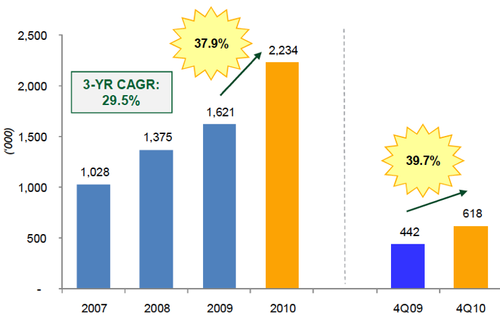 Cebu Pacific was the Philippines’ largest domestic carrier, with 48.2% market share in FY2010. 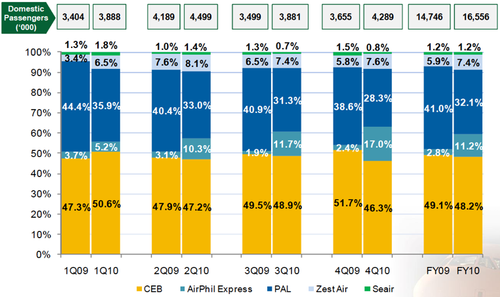 Four brand new A320 aircraft were delivered from Oct-2010 to Jan- 2011, all financed through ECA-supported loans. The carrier has also advanced to 2011 the delivery of two A320 aircraft which were originally scheduled for delivery in 2012 under operating leases. 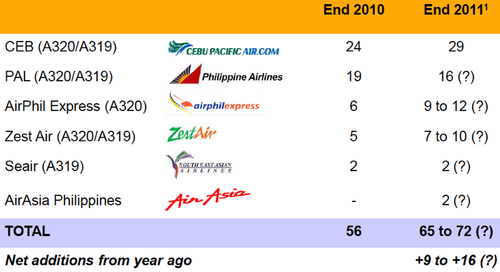 Despite its dominant position in the domestic market at present, Cebu Pacific will face increased competition from foreign carriers in the Philippines market in 2011.

Jetstar has also stated it is in talks with various local companies, looking for a Filipino partner. It also wants to tap markets outside Manila such as Cebu and Aklan.

Meanwhile, the Philippine Government, on 14-Mar-2011, issued EO 29 (Pocket Open Skies) which aims to boost tourism and foreign investments into the Philippines. A main provision of EO 29 authorises the Philippine Air Panels to promote and the Civil Aeronautics Board to grant unrestricted third, fourth and fifth freedom rights to the country’s airports other than the NAIA.

Cebu Pacific CEO Lance Gokongwei recommended that reciprocity be an integral requirement under the rules and regulations that will be prepared to implement Executive Order 29. Mr Gokongwei stated, “We would like to be part of this competition. If foreign carriers are given unlimited access on routes to and from the Philippines, we believe it is only fair that Cebu Pacific and other local airlines be given unlimited access to and from the Philippines to these carriers’ home countries, on an equal opportunity of access, on a level playing field.”

Another challenge for Cebu Pacific is rising fuel costs although the carrier stated it is aiming to come out of this fuel crisis stronger as it has done so in FY2008.

Fuel accounted for approximately 43% of Cebu Pacific’s operating cost in FY2010. The carrier has hedged 30-35% of fuel requirements up to end FY2011. The carrier however noted that the peso appreciation can offset increases in jet fuel price.