Brazil’s fourth largest domestic airline, Avianca Brazil, has opted to branch out internationally with new service to Miami and Santiago, Chile, joining formidable competitors in each market that will compete fiercely with a new rival. Avianca Brazil’s competitors have significant strength in each market, with an ability to market vast network connections in conjunction with their partners.

Avianca Brazil’s decision to add international destinations occurs as its domestic growth continues unabated, despite warnings by its Brazilian rivals that overcapacity in the domestic market could threaten a slow recovery of yields that is just starting to take shape.

Avianca Brazil’s branching out into international markets occurs against the backdrop of a potential merger with Avianca Holdings. Each company is majority owned by Synergy Aerospace, but operates separately. After completing the evaluation of a potential merger with Avianca Brazil in 2014, Avianca is now reconsidering a potential tie up with the airline amid an ugly shareholder battle over Avianca’s pursuit of a strategic partnership with United.

OceanAir, owned by Synergy Aerospace, was rebranded as Avianca Brazil in 2010 after the merger of Avianca and TACA. Synergy is the major shareholder in Avianca Brazil and Avianca Holdings, but the two airlines are operated as completely separate entities, with no coordination other than a codeshare covering 10 airports in Brazil.

Avianca Brazil has grown rapidly during the past few years, averaging annual ASK growth of 28% between 2012 and 2016. 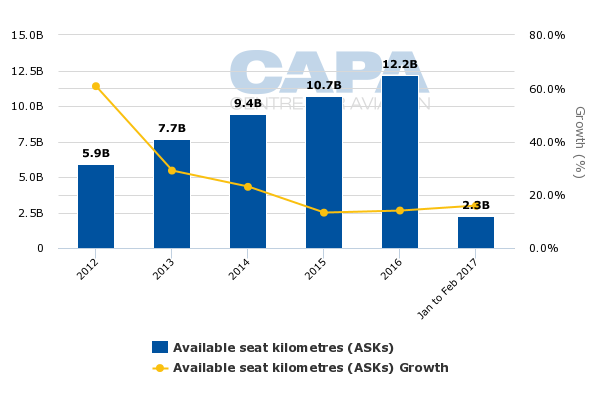 All of that growth has occurred in Brazil’s domestic market. At present (13-Apr-2017) Avianca Brazil’s only international route is a once weekly flight from Fortaleza to Bogotá. 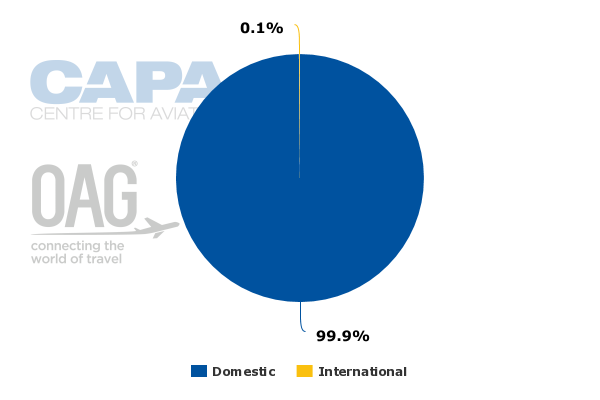 LATAM Airlines Group has recently stated that its unit revenues on Brazilian domestic routes increased by 15% year-on-year in 4Q2016; however, RASK remains below historic levels, and the group continues to take a cautious approach to capacity management in Brazil.

Gol has expressed concern that competitive capacity increases in Brazil’s markets could negatively affect fares on the country’s domestic routes.

Avianca Brazil is now turning part of its attention to long haul flights, adding service from its largest base measured by seats, São Paulo Guarulhos, to Miami in Jun-2017, followed by Santiago in Jul-2017. 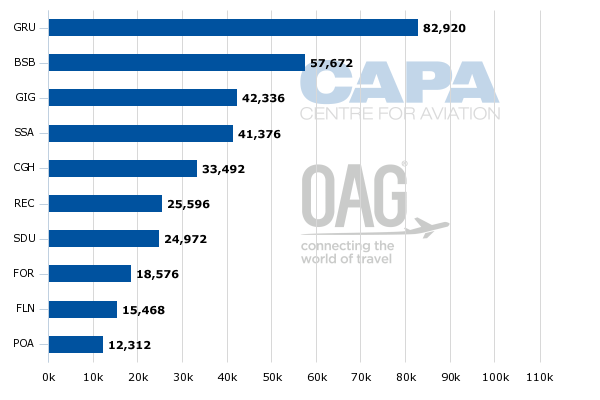 Both of Avianca Brazil’s new routes are dominated by LATAM Airlines Group and its partners.

São Paulo-Miami is served by LATAM Airlines Brazil with its oneworld partner (and potential joint venture partner) American. For the week of 4-Apr-2017 the airlines offer a total of approximately 10,202 one way seats in the market – a 5% increase year-on-year.

Although São Paulo-Miami has a sizeable O&D passenger presence among the USD2.1 million passengers that travelled between Miami and Brazil in 2015, LATAM and American also have the benefit of offering vast beyond connections in both the US and Brazil.

American is the largest airline in Miami measured by frequencies to and from, holding a 68% share for the week of 10-Apr-2017. LATAM Airlines Brazil holds 30% of the frequencies from São Paulo, followed by its rival Gol at 28%. Avianca Brazil, serving just 23 domestic destinations, does not have the same network breadth in Latin America as LATAM Airlines Group. (Figures are based on CAPA and OAG data)

Additionally, Azul offers daily flights from the São Paulo market to the South Florida market – from its largest base and headquarters at Campinas Viracopos to Fort Lauderdale. Based on Avianca Brazil’s plans to operate 238 seat Airbus A330s daily  between São Paulo and Miami, one way seats between the greater São Paulo region and South Florida will grow by approximately 14% once the airline launches new flights (based on seven days per week service and seat levels as of 4-Apr-2017).

This is a solid increase in capacity in a market that is just showing signs of a recovery, and Avianca Brazil’s entry will likely create some pricing pressure initially.

Unlike some of its lower cost rivals, Avianca Brazil markets its product as more of a hybrid offering, with wider seat pitch, leather seats and hot meals on short haul flights. The airline is offering a business class on its A330s, with fully flat seats on its A330s, competing with LATAM and American for higher yielding business travellers. But overall corporate travel yields for flights within Brazil, and to and from the country, remain below historical levels, creating unique challenges for Avianca as it enters the market.

Both Gol and LATAM Group airlines offer flights from Guarulhos to Santiago. The flight connects two of LATAM Airlines Group’s major hubs (Guarulhos and Santiago), and the company represents 80% of the seats on offer between the two airports for the week of 4-Apr-2017.

Avianca Brazil is competing on the pairing against Brazil’s two largest domestic airlines, both capable of offering numerous connections through São Paulo compared with their smaller rival.

Although Guarulhos is Avianca Brazil’s largest base measured by frequencies, it represents just 12% of the airport’s frequencies of 530 weekly flights, compared with Gol’s 1,223 flights and LATAM Airlines Brazil’s 1,284 flights. 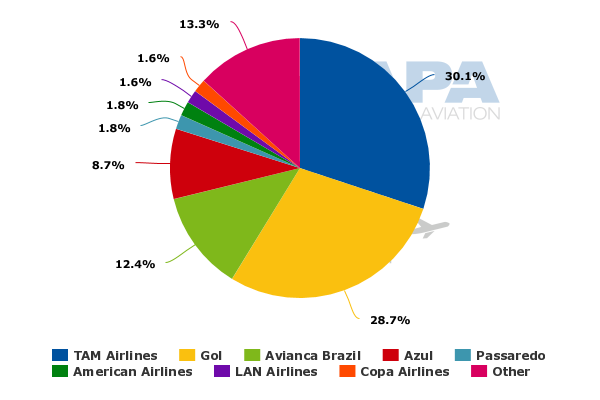 Similarly to its position on São Paulo-Miami, Avianca Brazil is launching flights to Santiago at a time when Latin America is slowly emerging from an economic slump. For 2017 LATAM is slowing capacity growth in its international network – comprising long haul and flights within South America – to between flat to 2% growth, after growing ASKs 5.6% in 2016.

Avianca Brazil has not escaped the yield weakness in Brazil, and its rivals are alluding to continuing pressure driven by planned capacity additions by the airline and Azul. Avianca Brazil is launching long haul flights at a time when yields remain below historical levels, which means the spool up period for those routes will take longer.

The airline is also launching international flights at a time when its parent Synergy is embroiled in a battle with Avianca’s second largest shareholder over a partnership deal that Synergy brokered with United. There is also a renewed push for a merger between Avianca and Avianca Brazil, after Avianca decided not to pursue merging with Avianca Brazil in 2014.

The public rationale for Avianca’s second review of Avianca Brazil is that the Brazilian airline has bolstered its market share and improved its financial performance; but Synergy could be pushing for the merger behind the scenes in order to broaden Avianca Brazil’s reach in Latin America.

Avianca Brazil has worked to grow its market share in Brazil’s domestic market during a time of economic instability. Now it is turning its attention to international markets as Brazil’s economic forecast for 2017 shows slightly positive GDP growth. But the country has a long road ahead in its economic revival, which will result in a slow recovery of air passenger growth for the foreseeable future.

On its international routes the company faces formidable rivals that would compete fiercely in any circumstances. But more so given the fragile passenger recovery under way in the region, Avianca Brazil’s rivals on is new international flights will fight even more intensely to maintain their dominance.