Just as most Australian states open up their internal borders, soaring COVID-19 case numbers are disrupting the network recoveries achieved in recent months by the country’s major airlines, proving once again how fragile such rebounds can be.

In Australia there have been record numbers of COVID-19 infections, thanks to the rapid spread of the Omicron variant of the virus. Virgin Australia was first to announce network capacity cuts in response to the latest coronavirus pandemic wave, with Qantas following soon after by scaling back its domestic and international capacity plans.

The two airlines had essentially reached pre-pandemic domestic capacity levels over the holiday period, but they will not be able to sustain this success in the first quarter of 2022 due to Omicron. It would not be a surprise if further cuts are also announced.

The main ray of hope is the possibility that the Omicron outbreak could be quicker to peak and subside than the previous Delta variant wave, allowing the airlines to resume their recovery trajectories.

The main question is when this will occur.

Omicron may be less deadly, but Australia is experiencing its most rapid spike in cases

The arrival of Omicron in Australia has been followed by a dramatic rise in COVID-19 cases, with daily numbers far higher than in the country’s previous waves.

The first chart below shows how steep the rate of increase has been, and the second chart illustrates that case numbers are at unprecedented levels. Remarkably, the Dec-2021 and Jan-2022 numbers are so high that they have effectively flattened out the mid-2021 wave in comparison.

Comments from New South Wales health officials suggest that the peak in new case numbers in that state may occur very soon, or may even have been reached already. 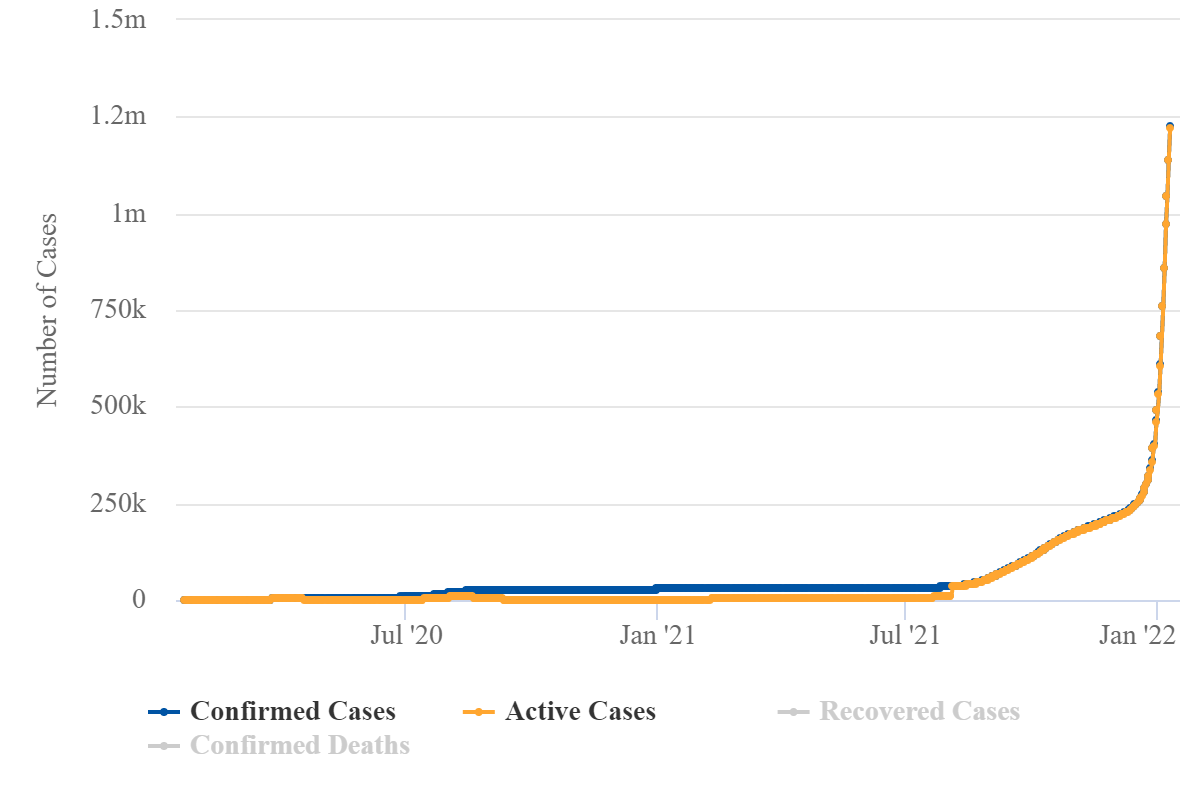 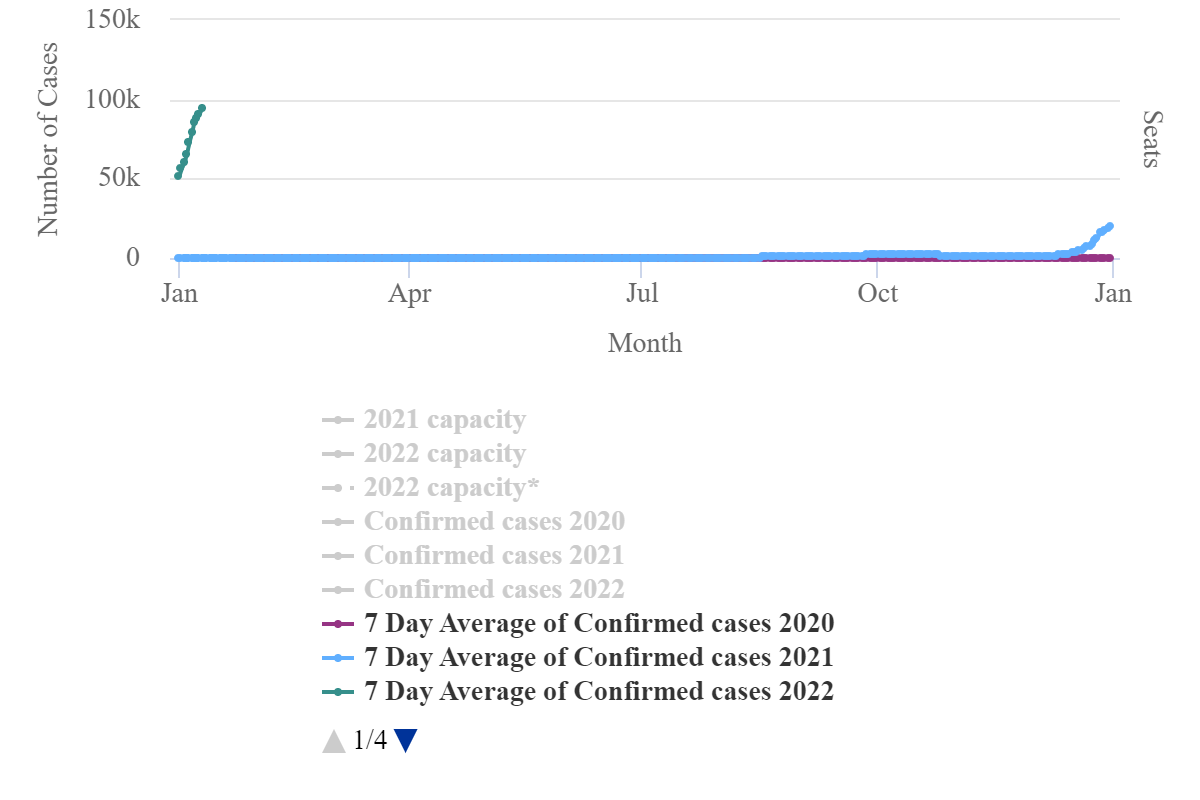 Statistics from the Our World in Data website show that Australia had 3,958 new daily cases per million people on 12-Jan-22. This was one of the highest proportions for any major country, behind France and Ireland. It was the highest ratio in the Asia-Pacific region.

The same website showed that Australia had 1.22 deaths per million on that date, which was much further down the list of countries.

Australia also has a comparatively high vaccination rate. As at 16-Jan-2022, 93% of the over-16 population is fully vaccinated and 95% had had one vaccination, according to Australian government data.

Virgin will reduce frequencies and will also suspend 10 routes

On 10-Jan-2022 Virgin Australia said it would reduce its network capacity by about 25% for the remainder of Jan-2022 and all of Feb-2022. Virgin said it has been forced to make this decision due to declining demand related to the latest pandemic wave, and also because of the number of its staff members required to isolate due to COVID-19.

The airline said it would achieve the planned capacity cuts by reducing frequencies on some domestic trunk routes and temporarily suspending 10 other routes.

The suspensions are scheduled to begin in late Jan-2022. Six of the routes will resume in Mar-2022, but the other four are not expected to return until Jun-2022.

All but one of the suspended routes are domestic. Virgin is also pausing its Sydney-Fiji route from 31-Jan-2022 to 10-Mar-2022. The Fiji route was Virgin’s first international service to resume after a long hiatus when the route was relaunched on 16-Dec-2021.

Virgin Australia CEO Jayne Hrdlicka said that despite the capacity cuts, the airline is still pursuing its goal of gaining a 33% share of Australia’s domestic market. Data from CAPA and OAG shows that Virgin had a 27% share of weekly domestic seats for the week of 10-Jan-2022.

The chart below shows how Virgin’s domestic capacity – as measured by weekly seats – had finally reached 2019 levels in the week before Christmas 2021.

However, the falloff in early Jan-2022 is unmistakable, and is larger than the post-Christmas drop in the previous year 2020-2021. 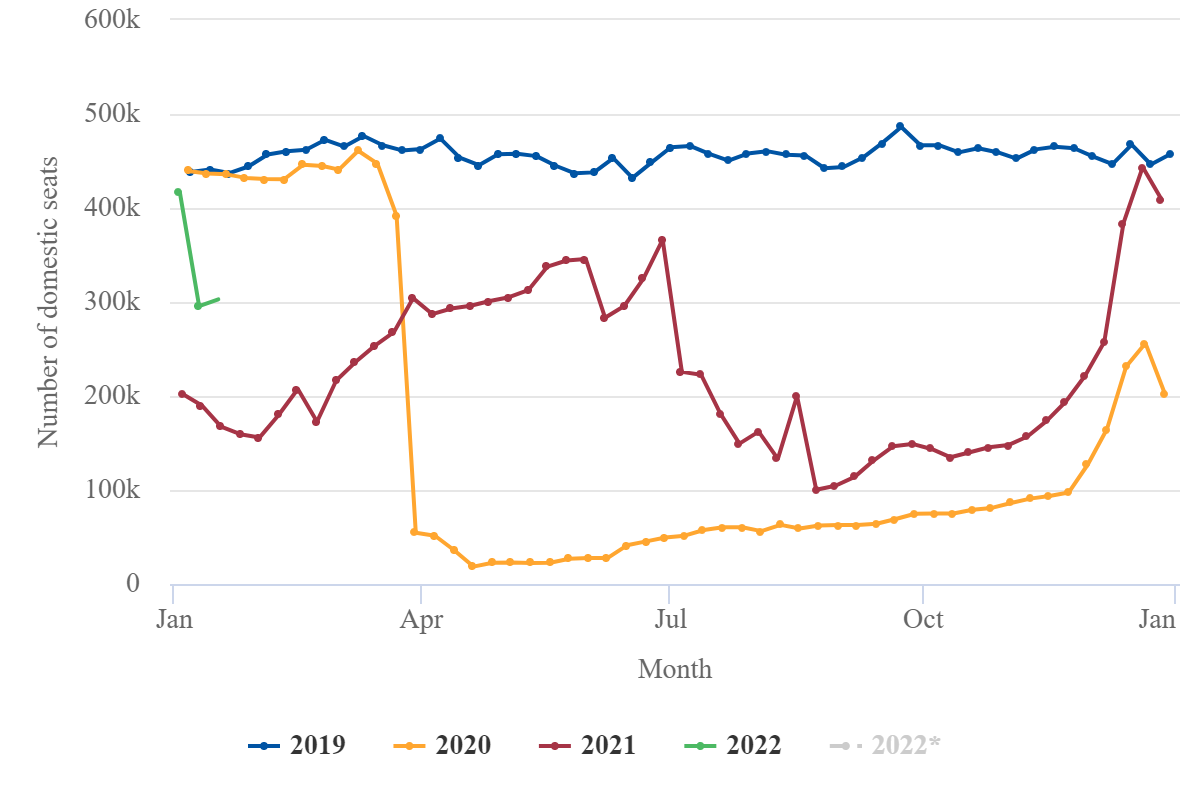 On 13-Jan-2022 the Qantas Group said that it expected to operate 70% of its pre-pandemic domestic schedule in the three months through 31-Mar-2022, its fiscal third quarter. This is down from its previous plan of operating 102% of its pre-COVID schedule for the quarter.

Qantas said its domestic changes would be focused on reducing frequencies and aircraft gauge on certain routes.

International capacity will be reduced from 30% of pre-pandemic levels, to approximately 20%.

The international cuts mainly affect leisure routes operated by the Qantas Group subsidiary Jetstar. These are caused by increased travel restrictions in countries such as Japan, Thailand and Indonesia. Qantas stressed that other international markets are still performing well, including London, Los Angeles, Vancouver, India and Johannesburg.

The group will not stand down any of its Australia-based employees, despite the capacity reductions. Qantas said this would give the group a “significant buffer” to avoid disruptions if large numbers of staff members have to self-isolate due to the Omicron variant.

“We have the flexibility to add capacity back if demand improves earlier than expected, but 70% still represents a lot of domestic flying and it’s a quantum improvement on the levels we faced only a few months ago”, said Qantas CEO Alan Joyce.

The airline has not yet made any adjustments to its capacity for the fiscal fourth quarter (to 30-Jun -2022) Mr. Joyce said bookings looked “promising” for the Easter holiday period in Apr-2022. Qantas will give an update on the financial impact of the capacity cuts and demand levels in its half-year results in late Feb-2022.

The chart below indicates that as with Virgin, Qantas’ domestic capacity (excluding Jetstar) touched pre-pandemic levels in the week before Christmas 2021. In this case, however, the latest capacity cuts are yet to be included to a significant degree. 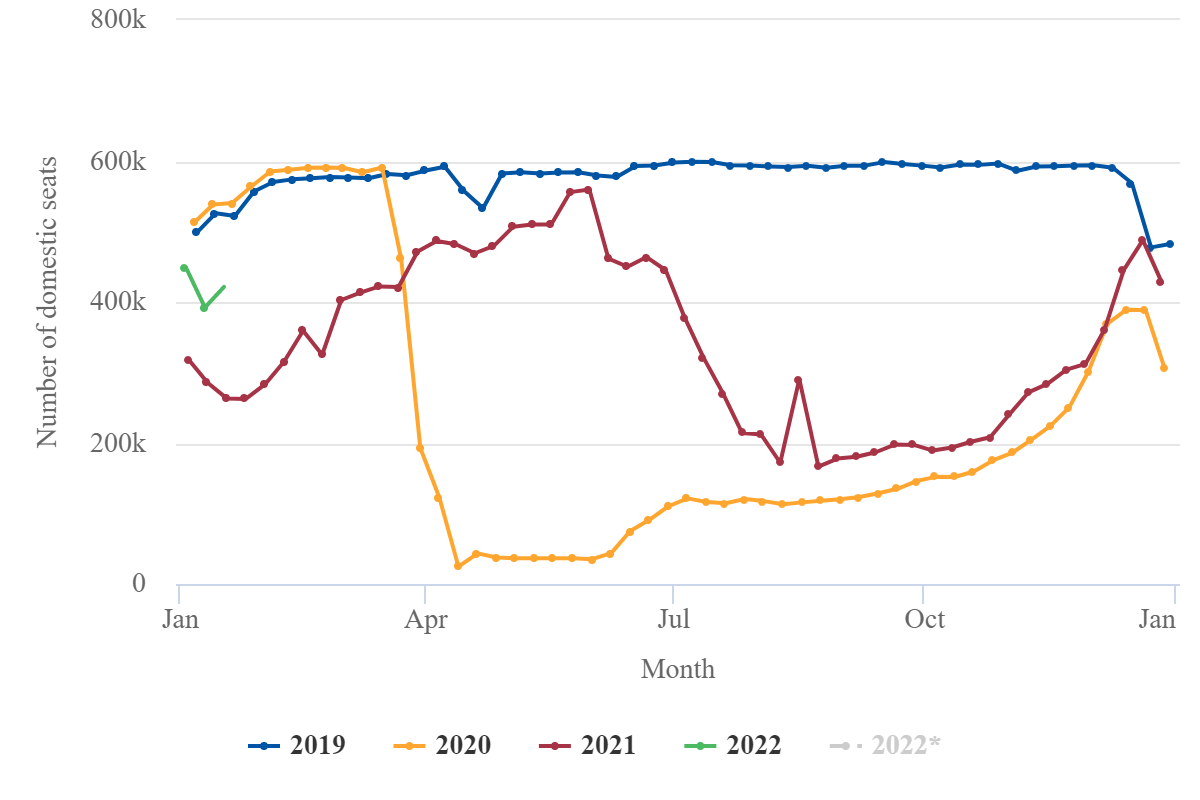 While case numbers are higher this time, the response from states has been more measured

One of the main differences between this wave and previous ones – at least from the airline perspective – is that Australian states have not introduced new border closures. This means that airlines are adjusting capacity based on demand expectations rather than due to the suspension of major traffic flows. A similar dynamic is at play in the Indian domestic market.

It certainly helps that a high percentage of Australia’s population has been vaccinated now, compared to the situation during the Delta wave in 2021. As expected, this has given state governments greater flexibility in their policy responses. The strengthening assumption that the Omicron variant is less dangerous is another positive. Nonetheless, the sheer number of people affected is disrupting business flows.

Now all the airlines can do is wait to see when the Omicron wave subsides, and ratchet capacity levels up or down as needed.

It is clear there is demand for domestic travel, particularly as international travel remains complex, so if the Omricon wave washes through later in Jan- or early Feb-2022, a full recovery could be in place for the peak Easter period - when Western Australia promises also to be open to domestic operations.