The Greek economy is the subject of international attention as attempts are made to restore the stability that might prevent ‘contagion’ of the debt crisis and its spreading to Portugal, Ireland, even Spain and Italy, potentially threatening the Euro itself. At the same time, the airport assets of Hochtief, a partial owner of Athens Airport, are up for sale. In the circumstances one might expect that Athens Airport would be seeing a slowdown in traffic, apart from EU and IMF entourages. But what is the true story? CAPA asked Athens Airport’s management to comment.

CAPA: Traffic volumes have been performing reasonably well lately, despite the negative media publicity about Greece. What is your outlook for the coming summer, and do you expect to end 2011 with growth in passenger numbers over 2010?

Athens International Airport (AIA): Although there was negative media publicity for Greece lately, traffic volumes, during the summer months, have been performing reasonably well. June ended up with an increase in passenger traffic of a +2%, split into +3.7% for the international passenger traffic and a -1.5% for the domestic passenger traffic. Almost similar developments seem to be the case for July, as well. Overall, despite the continued adverse financial conditions prevailing in the Greek economy, foreign carriers continue their development out of Athens International Airport, by a 9% increase in their scheduled international services during the summer period.

CAPA: Which new routes/capacity upgrades have you attracted lately. Where are the big opportunities in terms of un-served cities/regions?

AIA: There is a growing number of “new arrivals” to our airport during the Summer Period 2011, demonstrating the dynamics of the Athens market, even amid the negative conditions affecting the Greek socio-economic environment.

There are still, however, big opportunities in terms of un-served cities/regions. Hamburg-Athens, for instance, is still un-served, although there is a large volume of indirect traffic. Regarding Non-European indirect destinations, Melbourne and Sydney, mainly due to the large Greek-Australian communities, have a really great potential, which is exploited at the moment by the Middle-East carriers mainly and by other airlines having direct connections with Athens, such as Singapore and Thai Airways. A big opportunity in the American continent is Chicago, where there is also a large Greek-American community.

CAPA: Why is Athens Airport apparently performing better than the Greek islands in terms of traffic growth?

AIA: Athens International Airport serves a catchment area of approximately six million people. Athens’s population amounts to four million people and another two million people are located in the greater area of Attica and Central Greece. It is the “capital” airport and, most importantly, although there is seasonality, our traffic is not highly dependent on seasonal flows; airlines’ operations to/from Athens are mostly year-round operations. And although the biggest percentage of our traffic is leisure traffic (almost 65% - Athens is mainly a tourist destination, after all), there is a 35% of business traffic, which is not the case for the regional airports. What I am trying to say is that the nature of traffic of Athens and that of the regional airports have lots of different characteristics and they are not exactly comparable.

This year, however, there was a big increase of direct low-cost operations to/from the Greek islands; this fact coupled with Aegean Airlines’ decision to base a limited number of its aircraft to Thessaloniki and Heraklion has brought a number of developments to the Greek aviation market overall and we monitor the situation closely.

CAPA: Has Greece captured demand from Egypt and North Africa/Middle East, following the recent troubles there?

AIA: Yes, it seems that there was captured demand mainly from Egypt and North Africa, following the recent turmoil in the region. This, however, had a positive impact on traffic to the bigger Greek islands mostly, which are globally renowned leisure destinations, where there is relevant infrastructure to accommodate the additional volume of leisure traffic and resorts of a similar type to those of Egypt and North Africa.

AIA: Financial uncertainty, as well as the impact on the Athens city profile, has heavily affected outbound travel. Since the end of 2009, the country experiences the deepest financial and economic crisis in its modern history, which resulted in a number of austerity measures (driven by the EU/ECB/IMF Memorandum of Agreement with the Greek State).

The latter are having adverse impacts on the disposable income (wages reduction, tax increases, etc) and hence on the Greek residents’ propensity to travel.  Furthermore, there is a dramatic reduction in business related travel, attributed to the overall negative business environment.

Last but not least, in the aftermath of a series of unprecedented events that took place in the period 2008-2011, together with the negative publicity around the country’s image from the financial crisis, Athens’ brand image as a tourist and business destination has been severely affected. All the above have created for us a new set of challenges: in line with our commitment to continuously assisting our airline-partners and to risk-sharing policies and actions, we have further enhanced our incentives package, we offer highly sophisticated business intelligence tools to our airline-partners and there is a continuous enhancement of our marketing support programmes.

On top of the above, during the previous year, AIA has prepared and is about to launch as of the next Winter period (October 2011), in cooperation with the airlines and other organisations /museums/ enterprises in Athens, a specific project, which is called:

“athensspotlighted – be on the spot…”

This project will be presented to the public by the end of Sep-2011 and it aims at enhancing the market strength of the Athens destination and attracting more visitors to our city.

CAPA: The merger between Olympic Air and Aegean Airlines has been prohibited. What effect would it have had on routes at Athens Airport given that the two airlines dominate capacity?

AIA: The Greek air transport sector experienced significant changes in the home-based carriers’ status and performance during the last two years.  Initially, the privatisation of Olympic Air, in Oct-2009,  followed by a suspension of a substantial number of its European and long-haul routes and, subsequently, the announced – and finally rejected - merger between the privatised Olympic Air and Aegean Airlines.

It is difficult to say what the effect would have been on routes at Athens International Airport in the case of an approval. However, it seems that in the case of a favourable decision with conditions attached, in order to “compensate” for a possible dominance of the merged carrier in the domestic market, favourable conditions could have been created for the start-up of a “new” carrier with its base of operations in Athens.

CAPA: Traffic is oriented heavily towards Europe - especially Western Europe - presently, with less than 20000 seats available weekly to North America, and less than 4000 to Southeast Asia despite there being a large Greek diaspora in both regions. Hellenic Imperial Airlines has plans to establish a network of over 40 destinations over the next few years on several continents. What impact is it expected to have?

AIA: The objective of AIA’s aeronautical strategy has been the attraction of new airlines, the addition of new destinations in the airport’s network, (especially those where large Greek diaspora exists) and the increase of flight frequencies; the key elements of our strategy towards achieving the aforementioned objective are the dynamic pricing and the customer-centric and tailored-made incentives policy including the extended marketing support.  Aiming to maintain and increase the airport’s aircraft and passenger traffic, AIA’s aeronautical strategy has evolved around the development of Home-based and Network Airlines’ traffic through supporting the development and expansion of our key customers, by encouraging our current airline customers to maintain and open new routes out of Athens and to increase frequencies.

During the last four years, Hellenic Imperial Airways has been operating charter flights, accommodating traffic for big athletic events i.e. World Cup 2010) or other events, festivities, etc of limited duration. As of Jun-2011 they have embarked on a major endeavour, which is the launch of long-haul operations out of Athens to New York; to a market, that is, which is very competitive, but, at the same time, where there is large Greek diaspora. And they have announced a series of other developments to take place within 2011 and 2012. Athens International Airport has welcomed this positive development; committed to our risk-sharing philosophy and to assisting our airline-partners we have offered Hellenic Imperial the Additional Long-Haul Incentive provided to any airline launching long-haul services out of Athens, and we wish them every success. It is, however, premature, at this stage, to forecast on any medium- and long-term impact.

CAPA: The low cost carrier share, at only 6% or so of capacity, is well below the European average for an airport of Athens size and status. Are there any plans to change that?

AIA: The attraction of low-cost carriers as well as of additional traffic from low cost operators is part of our route development strategy. At the moment, AIA is a successful spoke airport for LCCs, 13 low-cost carriers connecting Athens with 20 international destinations. It is worth mentioning that, during the period 2002-2009, low-cost carriers in Athens have experienced an average annual passenger growth of 20.7%.

Specifically, the low cost carrier share is presently at the 7% of our overall market. As a percentage of our international market it amounts up to 11% in the first 6 months of 2011, having experienced a 1% increase compared to the respective period of 2010. This marginal increase is mainly due to the fact that three new low-cost carriers - JetairFly, Czech Connect and Transavia - have started operations to/from our airport during the summer of 2011, while easyJet is also expected to add Edinburgh to its Athens network as of Sep-2011. 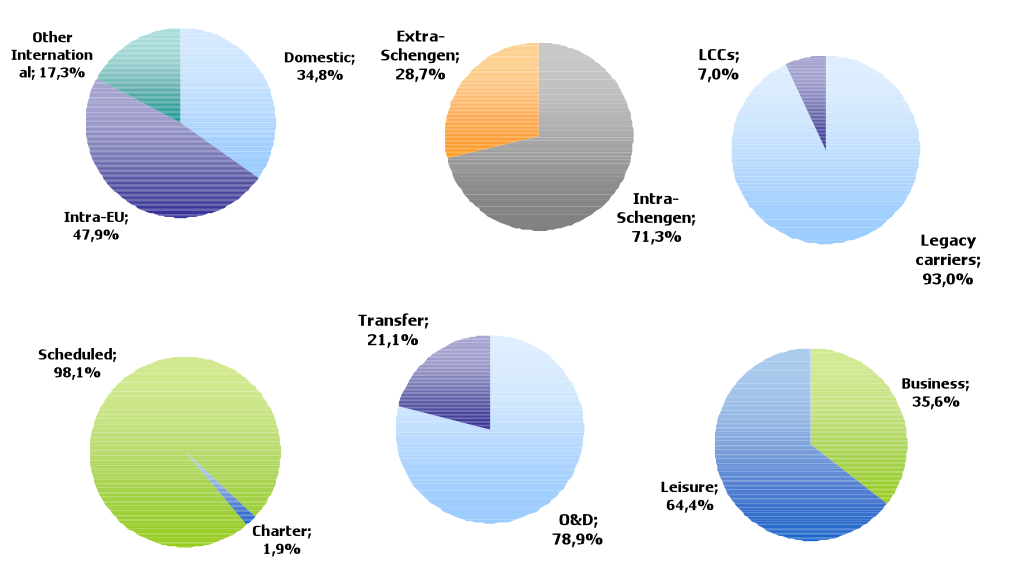