The Shanghai Composite Index closed 1.3% higher on Monday, after climbing 10% in Jul-2010 for the largest monthly increase in 12 months. The increase came on the prospect the Chinese Government will reverse policies aimed at slowing the world’s third-largest economy after manufacturing in Jul-2010 recorded its lowest expansion in 17 months.

Japan’s Nikkei average climbed 1.2% on Monday, with ANA shares rising 2.4%, following a 1.0% reduction on Friday. The carrier, on Friday, reported a narrowed net loss and an operating profit in the three months ended Jun-2010, as it benefited from an uptick in international business and tourism travel. ANA plans to establish a new LCC as early as 2011.

In Southeast Asia, Singapore’s stock market reached a 15-week high on Monday, due to optimism over corporate results and high dividend payouts, while Thailand stocks reached their highest level in 26 months, supported by the recovery in the economy.  Thailand has the best performing bourse in Jul-2010, while Indonesia has been the second-best performer so far in 2010.

In the Indian market, airline stocks were strong in Jul-2010, with Jet Airways' shares rising 27% since 02-Jul-2010, with Kingfisher Airlines’ shares closing up 6.6% and SpiceJet shares 9.4% stronger.  Shares in Jet Airways and SpiceJet, however, slipped yesterday, both by 0.6%, while Kingfisher Airlines’ shares were up by 0.7%. 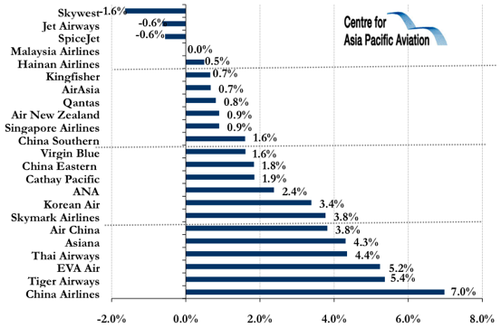