As Joy Air establishes regional carrier Hefei Airlines, is there room in China for regionals & HSR?

The more cynical of China watchers write off the country's future domestic network, believing high-speed rail (HSR) will obliterate the need for air travel. While HSR does pose a threat on short sectors, these comprise the minority in China. The larger competitive worry, rather than annihilation, is regional flying. Carriers have shied away from regional operations, but China Eastern's part-owned subsidiary Joy Air has signed an agreement with the Hefei Municipal Government to establish Hefei Airlines by the end of 2013, based in its namesake city in central China.

Hefei will be at the convergence of HSR lines, but there will be opportunities to connect the city with nearby cities that do not overlap with HSR. Indeed, the preliminary plan calls for the carrier to operate 50-70 routes with 30 aircraft by 2020.

While perhaps achievable, its success will be tied with the region's, which has some of China's poorest but also fastest-growing provinces, as manufacturing moves inland away from the expensive coastal region. Hefei has attracted Unilever while Zhengzhou, 450km away, is home to a Foxconn plant that reportedly produces 70% of the world's iPhones.

Hefei Airlines is another new airline, but within the Big Four

In the last decade China limited the start-up of additional carriers as the market struggled to adjust to a number of private entry carriers (the most notable of which were Juneyao Airlines and Spring Airlines).

But since the middle of the decade , exceptions were made for carriers formed as part of a joint venture with an existing carrier, notably the private Hainan Airlines and the government-owned Big Three of Air China, China Eastern and China Southern.

Air China, the flagship, often seen as a vehicle for government policy, has taken the lead in establishing Tibet Airlines, Dalian Airlines and a pending carrier in Inner Mongolia. Hainan Airlines has proposed forming Fuzhou Airlines.

Hefei Airlines was established on 20-Jan-2013 following the signing of an agreement between Xian-based Joy Air and Hefei Municipal Government. The share structure was not disclosed. Joy Air, in turn, is 40% owned by China Eastern.

Cross-ownership and partnership amongst carriers in Greater China: Nov-2012 A radius of 650km from Hefei gives the proposed carrier a combination of inland growing cities like Zhengzhou and Changsha and slower growing but wealthier cities like Hangzhou and Shanghai.

The HSR will also continue from Nanjing to Shanghai, Hangzhou, Ningbo and Wenzhou (as well as Fuzhou, just outside the 650km radius). But latter cities on this HSR line will be only circuitously reached from Hefei, giving air travel an advantage.

Nanjing and Wuhan are obvious major destination losses for a Hefei-based carrier, but HSR would easily win in those markets: Wuhan is only 314km from Hefei and Nanjing 148km. HSR generally holds an advantage over air travel on routes under 800km. Beyond this distance travellers generally prefer to fly, given the time savings. The calculation is not black and white as it is subject to a number of factors: how direct the HSR service is (Wenzhou on HSR is 860km versus a direct flight of 550km), the speed of the HSR train (some deployed at 350km/h but following a fatal crash have a maximum speed of 300km/h while other trains are at 200km/h, further giving an advantage to air travel), station convenience (unlike in Europe, HSR stations in China are often outside the city centre, requiring a considerable journey to reach either the station or airport), pricing and public image (which has declined since the HSR crash).

Besides the major cities that might overlap with HSR from Hefei, some clearly will not. Smaller cities will see service too, and no doubt over the decade more cities will spring up while others grow. But 50-70 routes for now seems optimistic unless Hefei Airlines expands beyond services to and from its initial hub in Hefei.

Aircraft selection was not disclosed but will likely be regional jets, not only matching the needs of Hefei's market but also following parent Joy Air, which operates seven Xian MA60s. It has additional orders and options available.

Joy Air in Nov-2012 cancelled two A320s it was due to take from ICBC (they went to Lao Airlines instead). Joy Air has also signed for ARJ21s, the delayed Chinese regional jet, as well as 20 C919s, the narrowbody jetliner China's Comac is developing to compete with the A320 and 737 but also keep more of the country's cash within China. Joy Air is partially owned by Chinese airframer AVIC, which manufactures the MA60.

Hefei, the 32nd largest airport in China, primarily serves the domestic market, which accounts for 96% of its capacity. China Eastern is the largest carrier, potentially raising concerns about cannibalisation from Hefei Airlines, but Joy Air brand manager Ju Ge dispelled that notion, saying, “China Eastern is so far the only airline that has a branch company in Anhui, leaving Hefei Luogang International Airport a blind spot between central and eastern China.” Additionally, Hefei Airlines will be focused on regional routes, unlike China Eastern. 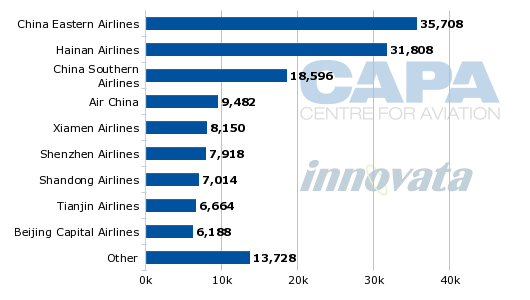 Only two routes in the top 10 served from Hefei based on seat capacity are within the 650km service radius Hefei Airlines has established: Changsha and Qinqdao. Of the 31 domestic routes served from the airport in Jan-2013, only nine are within 650km: Huangshan, Hangzhou, Nanchang, Shanghai Hongqiao, Shanghai Pudong, Zhengzhou, Wenzhou, Changsha and Qingdao.

Huangshan is one of the cities that in the future will see HSR expansion to it, likely ending the airline route. Hefei Airlines has made clear it does not intend to serve Wuhan, where HSR has made the need for air services near-redundant. 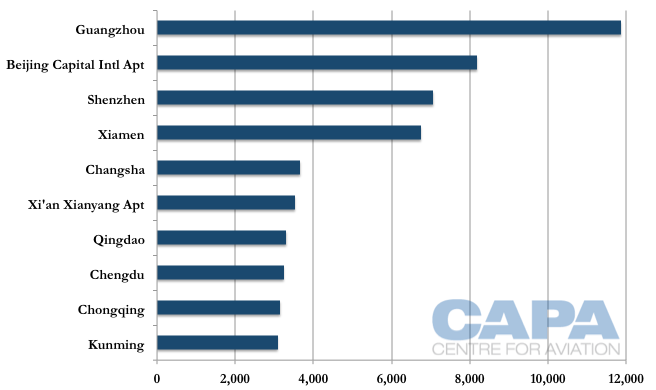 HSR can be a complement to HSR

High-speed rail can be a friend to airlines, as China Eastern is exploring via a partnership that sees it sell dual-mode air-rail tickets to enable it to carry passengers from cities it does not serve or are too small to have an airport. With Hefei lacking major HSR arteries, Hefei Airlines could use its services to link into the HSR networks.

In the long term Joy Air has floated the possibility of international services for Hefei Airlines. Hefei Airport's current scheduled international services, confined to eight, are a mixture of North Asia, Southeast Asian and Taiwan routes. International expansion would likely occur once longer-range aircraft are available, although this may not be an immediate priority as domestic services tend to be more profitable than international ones - although the latter receive government pushing to expand China's reach. 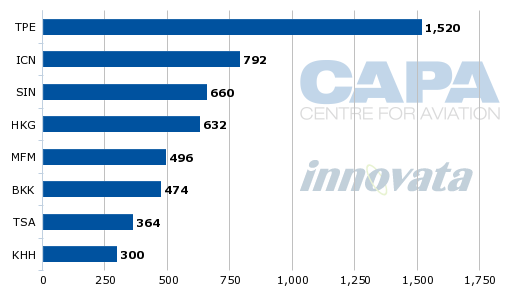 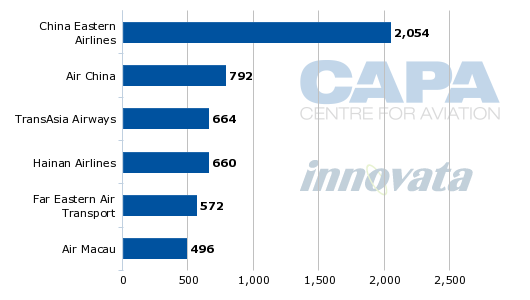 The growing region of inland China may not be Hefei Airlines' preserve for long. There was previously a regional carrier called Kunpeng Airlines that eventually based itself in Zhengzhou, north of Hefei.

Zhengzhou has emerged as a new manufacturing hub with China's aviation regulatory body the CAAC estimating in 2012 that 70% of all iPhones were manufactured at a large Foxconn campus there. Foreign trade in the city was expected to double in 2012 to USD60 billion from USD32.6 billion. Foxconn comprised about half of all foreign trade in the city in 2011 and is expected to have increased that share in 2012 to two-thirds.

A 2009 ownership change that saw the exit of US airline company Mesa Air Group resulted in Kunpeng re-branding as Henan Airlines, after the province in which it is based (the carrier is headquartered in the provincial capital, Zhengzhou). But a 2010 fatal accident saw the carrier grounded. Efforts were well under way in 2012 to revive Henan under ownership mainly from the local government as 51% shareholder Shenzhen Airlines, itself 51% owned by Air China, sought to withdraw due to the carrier's history, losses and accounting irregularities. However no agreement has yet been achieved.

Meanwhile China's other major state-owned carrier, China Southern, is looking to formalise its position in Zhengzhou, where it is the largest carrier with about 34% of all seats. China Southern in late 2012 planned to establish a branch company in Zhengzhou that would give local benefits and capital but would also see it need to develop a route network strategy amenable to the local government. The project is ongoing. 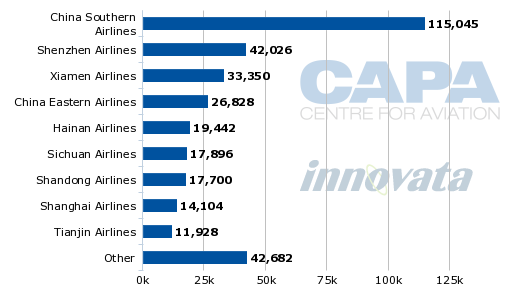 China Southern's services are primarily operated by 737s and thus lack the regional focus Hefei Airlines will likely have and which Kunpeng/Henan Airlines had. Nonetheless it illustrates the growth potential of just one region. Hefei Airlines' entry will be watched to see if more regional carriers can gain ground.

Eventually, coordinating HSR and regional airlines will be inevitable. But there are complexities

Geography will be important in this evolution and key corners of China – the northeast and coastal regions – will eventually be saturated with HSR and thus often unlikely able to support regional airline operations. Certainly, with China pouring state funds into developing indigenous aircraft, it will want to see production variants used locally (they are also exported, albeit in small numbers, such as to Laos).

A more telling outcome may be whether - and if so how - Hefei Airlines works with high speed rail to leverage its position. So far, such efforts have met only limited success and Hefei may not deliver best industry practices.

In meetings of generally entrepreneurial airline operations and government-owned, bureaucratically-run HSR, achieving commercially valuable outcomes is difficult. Over time some rationalisation will evolve, but it seems likely that it will result predominantly by airlines adapting to mesh with HSR, rather than any meeting of the minds. Over time the logic and value of experimentation in this area will produce results in the ever-growing and diverse types of markets China affords aviation.