Air China start-up Dalian Airlines commenced operations on 31-Dec-2011, marking another milestone in the flag carrier's expansion of its domestic footprint. A bastion of China Southern (following its takeover of China Northern in 2003), Dalian Airport is a key northern gateway, with strong trade links to neighbouring Japan and Korea - which feature in Dalian Airlines' future expansion plans. The focus on the north-eastern region also reflects a shift in domestic network development patterns in China in light of increasing competition from the high-speed rail (HSR) network. Shandong Airlines, Hainan Airlines and China Southern Airlines have separately stated they will increase services to/from China’s north-east and north-west regions.

With the establishment of Dalian Airlines, Air China, is expanding its domestic and regional presence through a subsidiary operation. The complex ownership structure of subsidiaries is common among the ‘Big Three’ carriers in China, while HNA Group also has a convoluted subsidiary and ownership structure, in addition to a branch carrier network.

Air China, China Eastern and China Southern all have secondary hubs in Dalian. Dalian Airlines is expected to face fierce competition from China Southern Airlines, which has a 37% share of the Dalian air market with over 30 destinations served non-stop from the city. Air China has a much smaller 13.1% capacity (seats) share at the airport at present, with around 11 destinations served non-stop, with Shenzhen Airlines holding a 10.5% capacity share. It is not clear if Air China will transfer routes to Dalian Airlines as part of the subsidiary's expansion. 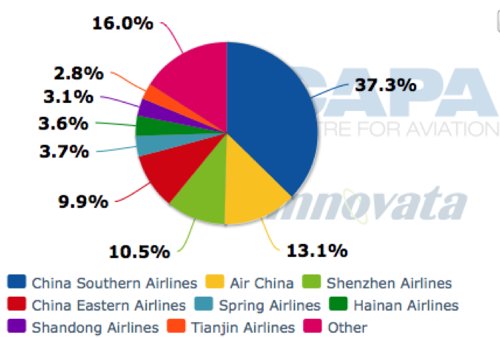 China Southern Airlines' Dalian branch company and Dalian Airport Group signed a strategic cooperation agreement in Aug-2011 to expand the carrier’s presence at the airport. Under the agreement, the carrier will maintain an average passenger traffic growth of no less than 12% p/a at the airport over the next five years, with a target of more than 15% p/a. China Southern's Dalian branch company transported 3.6 million passengers in 2010. 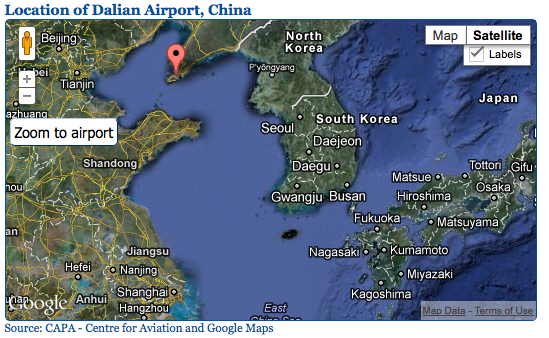 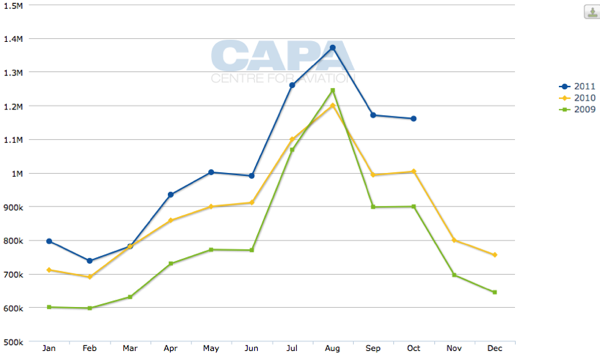 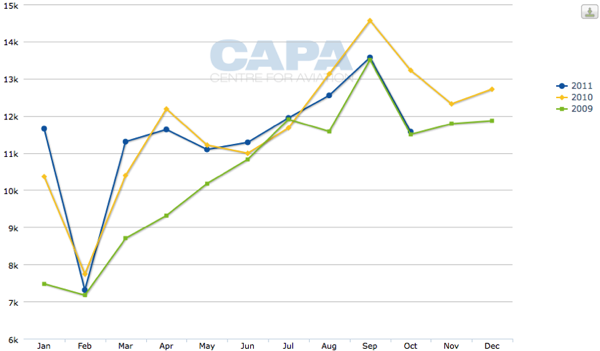 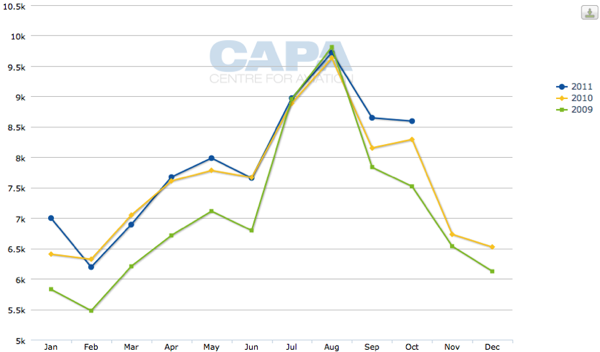 Meanwhile, progress continues on the CNY15 billion (USD2.3 billion) new Dalian Airport project. Phase I of construction work is expected to be completed between 2014 and 2015, by which time the current Dalian Airport will have reached its capacity and will be transformed into a freight airport.

Overall, the northern part of China has the lowest density of HSR development, while the 904km Harbin-Dalian high-speed rail (HSR) has been delayed until at least Jul-2012. Service was expected to commence in early 2012, but test operations on the line have been postponed due to quality problems, including excessive roadbed settlement near Dalian City.

Once the high-speed line is put into service, most rail passengers will shift to the new line, relieving pressure on the existing Harbin-Dalian railway, the busiest in the region transporting goods such as coal, oil, agricultural products and lumber. According to Xinhua report, the existing line will be able to transport an additional 50 million to 60 million tonnes of cargo once the new high-speed line is operational. According to the Ministry of Railways, the line is expected to carry 37 million passengers p/a by 2020 and 51 million p/a by 2030.

Dalian International Airport deputy GM Du Zhiyuan previously stated the airport would hold talks with the Ministry of Railways to establish some sort of cooperation in light of the line development. Mr Du stated the development of the HSR network might not necessary be a bad thing for the airport adding that the rail network can bring domestic passengers to the city and the airport, through its route network, can provide onward connections for passengers to other parts of China and/or international destinations such as Japan and Korea.

Dalian Airlines becomes the first airline company based in Dalian

Dalian Airlines commenced operations with the launch of daily Dalian-Shenzhen service on 31-Dec-2011, a few days later than its previously intended 26-Dec-2011 launch date. The carrier also launched daily services from Dalian to Beijing and Sanya via Taiyuan on 01-Jan-2012 and plans to operate to Japan and South Korea in the future. The carrier is based at Dalian Zhoushuizi International Airport, China’s 20th largest airport and one of the largest airports in north-east China. Dalian Airlines has become the first airline company based in Dalian.

The carrier is operating with three Boeing 737-800s (of which two are owned) initially, but plans to increase its fleet size to five aircraft in 1H2012 and 20 aircraft by 2015. The carrier is officially registered with ICAO and assigned the code CCD by China’s Air Traffic Control. Air China, which has transferred 122 of its employees including 28 pilots to the start-up, has also agreed to allow Dalian Airlines to operate under its CA code.

Dalian Airlines’ application for its Air Operator's Certificate (AOC) received preliminary approval from CAAC Northeast Regional Administration in Nov-2011 after receiving initial approval from CAAC Northeast Regional Administration to establish the carrier in Jul-2011. This follows an agreement reached between Air China and the Dalian Government in 2010. The Government of Dalian had earlier finalised a similar agreement with HNA Group to develop a Dalian-based carrier, although a disagreement between the two parties resulted in the agreement being abandoned, paving the way for the Air China agreement.

Air China acquired a 51% stake in Shenzhen Airlines in Mar-2010 while it has absorbed the crew and fleet of East Star Airlines in central and south China. Air China also has an ownership position in Zhengzhou-based Henan Airlines (Henan Airlines is also 51% owned by Shenzhen Airlines). The Beijing-based carrier also has stakes in Shandong Airlines, Air Macau and Cathay Pacific. In terms of cargo coverage, Air China operates Air China Cargo under a JV with Cathay Pacific, while Shenzhen Airlines has a 51% stake in Jade Cargo International, which temporarily halted operations on 31-Dec-2011. Air China additionally has regional operations in areas including the Southwest, Zhejiang, Chongqing, Inner Mongolia, Tianjin, Shanghai, Hubei and Guizhou, and Tibet.

The establishment of subsidiaries by the Chinese majors also reflects the nature of regulation in China’s domestic aviation market. Under CAAC regulations, airlines that wish to establish a new subsidiary must have a total fleet of more than 50 aircraft and more than 10 years operating experience. For every 20 aircraft added to the carrier’s fleet, it will be permitted to apply to add one new subsidiary, subject to fulfilment of all other requirements.

These restrictions, and an increased focus by the CAAC to limit the number of start-ups to ease competitive pressures and improve air transport safety requirements, has resulted in recent start-up activity generally being limited to carriers linked to one of the ‘Big Three’. There has been a focus on regional airline establishment, complying with the CAAC’s objectives of promoting increased regional operations.

Meanwhile, foreign ownership in Chinese carriers remains almost non-existent with a few rare exceptions, such as Lufthansa’s ownership position in the now-grounded Jade Cargo International and the very important Air China-Cathay Pacific cross-ownership deal. Generally, however, foreign ownership in local carriers has been discouraged, openly or otherwise. Even so, this could change in the future, based on the increasing momentum relating to foreign investments being made in China in a wide array of other business sectors, such as hotel companies. But any developments are not expected to be imminent, given the opaque regulatory environment and influence of the 'Big Three'.

2012 will likely see the continued expansion of China's large and fast-growing second-tier carriers and air markets, especially in the nation's western and northern regions. Meanwhile, as the CAAC continues to cautiously monitor start-up growth in the domestic market, activity will likely be focused on subsidiaries and branch companies of the nation's larger carriers.