The business environment for air cargo has continued to weaken in 4Q2011, with IATA in its 4Q2011 Cargo E-Chartbook labelling the outlook for freight profitability as “pessimistic” and the revenue outlook as “weak”. This has occurred amid declining cargo rates, which has placed downward pressure on yields and revenues, while costs have remained high, despite some recent relief from declining jet fuel prices in Dec-2011 and reduced labour costs.

Reflecting pressures in the cargo market, Jade Cargo International on 31-Dec-2011 announced the temporary suspension of its services "due to overall weak air cargo demand". The carrier added the suspension of service will "provide the shareholders with an opportunity to coordinate with stakeholders to continue with the restructuring of the company’s financial structure". As a result of the suspension, the carrier's six Boeing 747-400ERFs aircraft have temporarily been grounded. According to reports in Boersen Zeitung, Jade Cargo no longer has the funds to purchase fuel for its six 747 aircraft. Lufthansa Cargo stated the company "believes in the future" of Jade and "hopes to find a solution in the next few weeks".

Lufthansa Cargo CFO Peter Gerber in mid Dec-2011 stated the carrier was looking for a new Chinese partner for Jade Cargo due to slowing demand growth and excess capacity in the China market, with questions focussing on the carrier's ability to survive in current market conditions. The carrier has reportedly had no success in finding such a partner. Lufthansa Cargo head of sales and marketing Andreas Otto separately stated that it had allowed Shenzhen Airlines until the end of 2011 to reach an agreement on plans to invest further funds into the airline with reports that Shenzhen Airlines and its Air China parent remain unwilling to consent to this much-required capital infusion.

Lufthansa Cargo chairman and CEO Karl Ulrich Garnadt told Reuters in Dec-2011 Lufthansa Cargo has known for years that Jade Cargo was undercapitalised and that it has been in "very constructive" talks with the Bank of China and Shenzhen Airlines to agree a capital increase for Jade. Lufthansa CEO Christoph Franz in Oct-2011 confirmed to Bloomberg the airline was considering disposing of multiple “non-strategic investments” and is analysing the profitability of these companies, with Jade Cargo International one of two units being considered. Mr Otto separately stated last month that if profit margins at Jade Cargo did not improve, it would not rule out a divestment from the carrier, with the carrier considering a portfolio-wide withdrawal of loss-making units on a global basis.

According to China.org reports, Jade Cargo International has made less than 20% of its operating revenue targets and is facing difficulties with refinancing. Lufthansa Group CEO in Oct-2011 added the freight market in China was becoming increasingly difficult and that the company would review its investment in Jade.

Jade Cargo was founded in Oct-2004 with flight operations commencing in Aug-2006. The Shenzhen-based airline, which currently has around 390 employees, is a JV between Lufthansa Cargo (25%), Air China subsidiary Shenzhen Airlines (51%) and DEG (24%). Lufthansa Cargo's VP margin management Frank Naeve took over as CEO of Jade Cargo in Apr-2011. Jade's future has been in question since Air China acquired Shenzhen Airlines in Mar-2010 as Air China has a fast-growing cargo JV with Cathay Pacific, Air China Cargo, with reports that Air China has also been considering selling its 51% share in the struggling carrier. The carrier's route network, prior to the suspension, comprised of services to Amsterdam, Chengdu, Dubai, Frankfurt, Kaunus, Milan Malpensa, Mumbai, Seoul Incheon, Shanghai Pudong, Shenyang, Shenzhen and Yantai.

As noted by IATA in Dec-2011, declining business confidence is continuing to place pressure on cargo yields on a global basis.

Cargo rates have continued their decline in an “unsupportive economic climate” according to IATA, with cargo rates now declining since 2010. Global rates have fallen almost 8% and South East Asia-Europe sectors have seen a 24% slump. 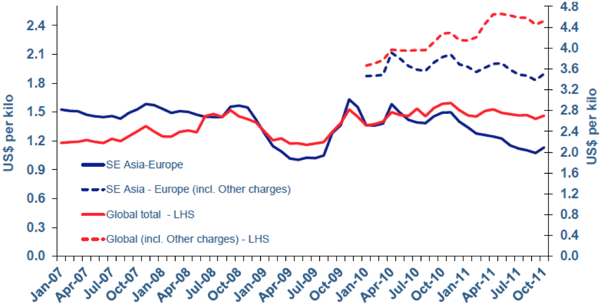 Unsurprisingly, cargo profitability has also been impacted after beginning to decline in 2H2010, although profits “so far have not been too bad” despite the worsening business environment for air cargo in 4Q2011, IATA said. While around 50% of airlines are meeting and exceeding their cost of capital, the results are passenger and seasonality driven, as heads of cargo indicate a much less confident outlook, IATA said. Downward pressure on cargo revenue growth rates has also persisted. 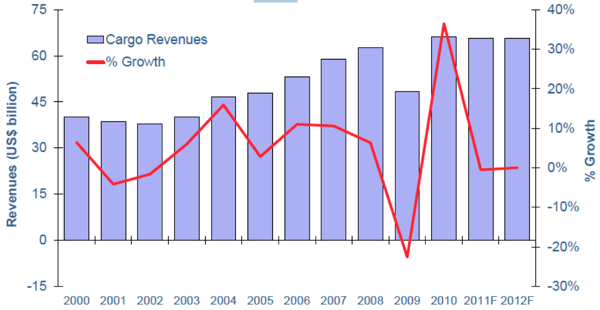 Source: ICAO and IATA in IATA Cargo E-Chartbook for 4Q2011

Revenue expectations also remain weak with the outlook for yields also pessimistic, based on an IATA survey of heads of cargo.

IATA survey of heads of cargo on revenue growth expectations 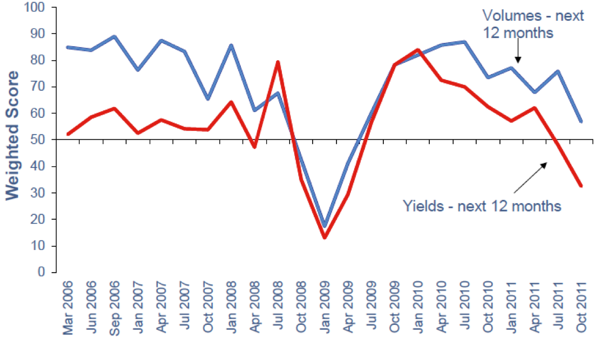 IATA, in its Nov-2011 traffic release, noted that total freight traffic have seen a 4% decline since the highs of early 2011, reflecting weak economic performance and falling business confidence, with year-on-year growth for all routes “well in negative territory”. IATA noted that there is “no sign of growth” ahead, amid competition from declining sea freight rates and flat trade indicators. 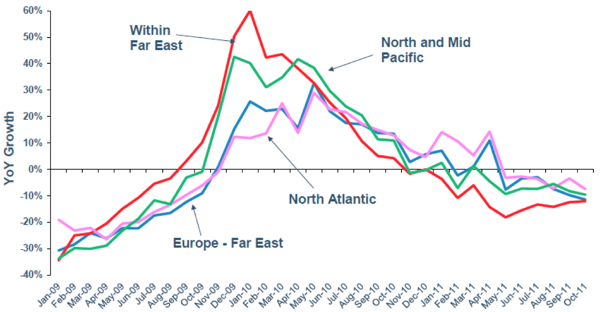 Looking at Asia-European cargo flows, IATA noted that declines in air cargo have been paired with increases in sea cargo, a less expensive mode of transport. 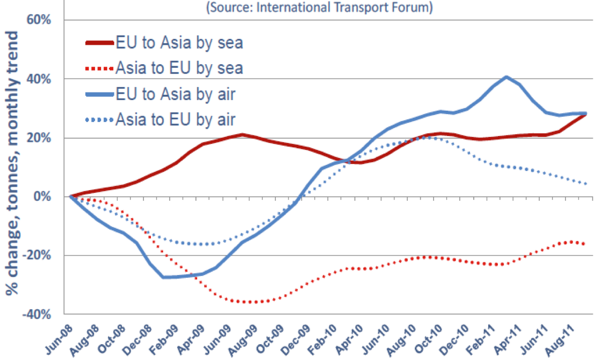 The traffic outlook also looks challenged, as air freight customers maintain a pessimistic outlook and further cut cargo shipments. “Although there is no obvious inventory overhang, pessimistic expectations are driving the need for air freight down, with purchasing managers confidence index indicating no growth prospects,” IATA said. IATA has also highlighted some changes in demand drivers, noting: “Consumers in Europe have become more pessimistic as the year has progressed, but American consumers have managed to regain some confidence. World trade is flat, while international air FTKs are dropping sharply, indicating that cargo is now being moved by other transport modes”. 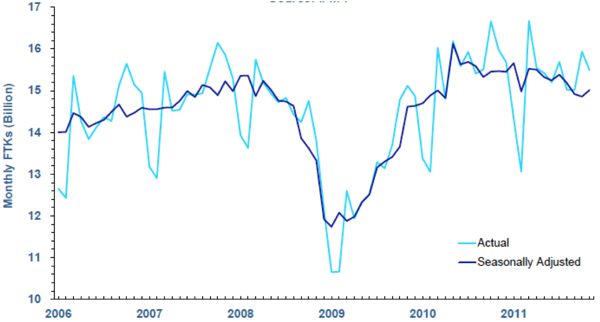 Asia-Pacific carriers have seen the weakest demand performance, with a market decline of 6.4% and reflecting falling demand for Asian manufactured goods from US and European consumers. European carriers reported a 4.6% fall in demand reflecting continued uncertainty associated with the euro zone crisis. North American carriers’ operations were largely unchanged from the previous year with only 0.2% growth. The Middle East and Latin American carriers delivered the strongest cargo performance with 4.6% and 4.0% growth respectively. African carriers reported a 1.7% year-on-year decline. While international freight markets stabilised in Nov-2011 but at relatively weak levels, current levels are almost 5% lower than the peak for the year in Jan-2011. 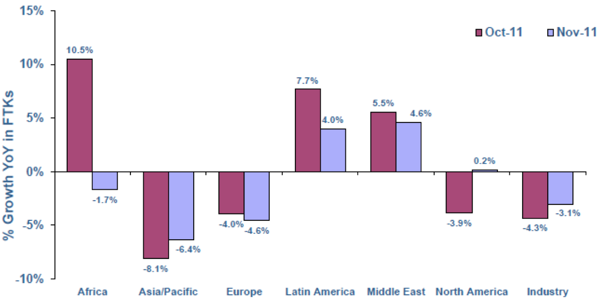 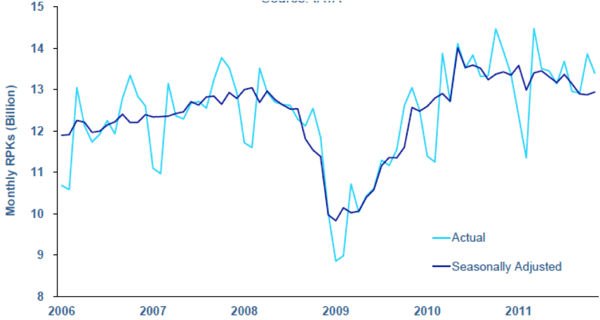 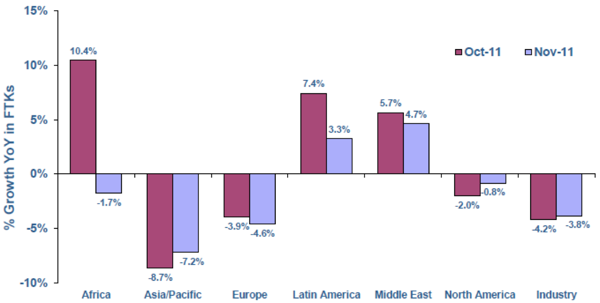 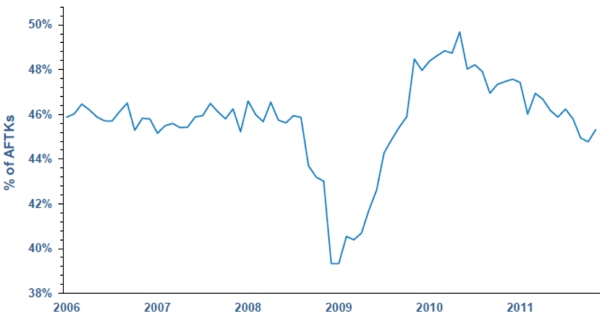 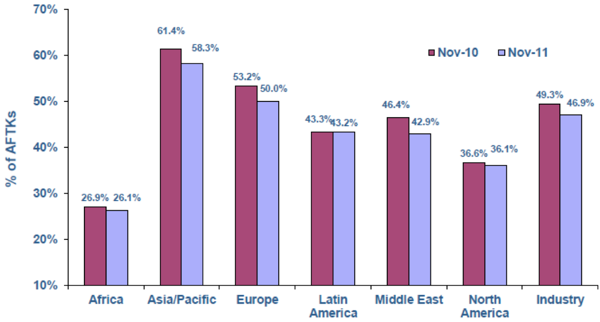 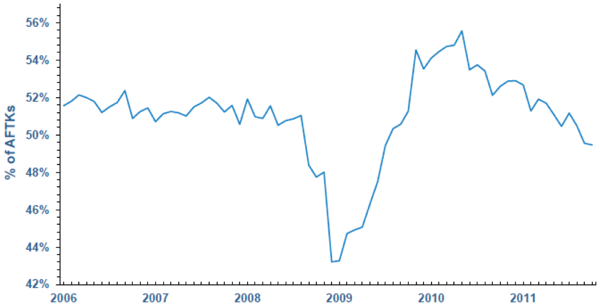 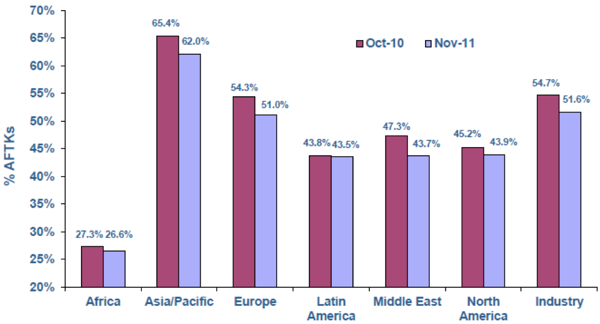 Although freighter fleets have been cut in response to the weak economic environment, cargo capacity has increased owing to the delivery of twin-aisle aircraft in response to passenger demand. The overall decline in load factors is undermining cargo profitability with IATA forecasting that large deliveries planned for 2012 will further exacerbate the overcapacity situation.

Cargo-only carriers still maintain a larger portion of freight, despite declines from their peak in 1Q2011 by 8%. Belly hold freight volumes have also fallen by the same amount, from highs reached in 2Q2010. 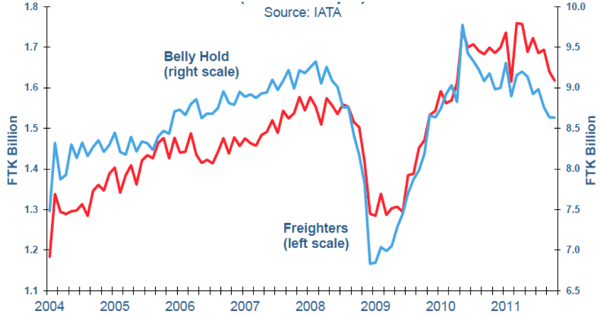 The freight outlook remains challenged as we enter 2012, with more pain expected for the world's cargo operators. Weak demand, reflecting challenged economic and business confidence, will continue in the first quarter, with profitability to be pressured amid declining cargo rates, yields and revenues. Declining sea freight rates and an increased company preference for cheaper (and slower) freight transportation options, combined with increased belly hold capacity are further pressuring the competitive environment. 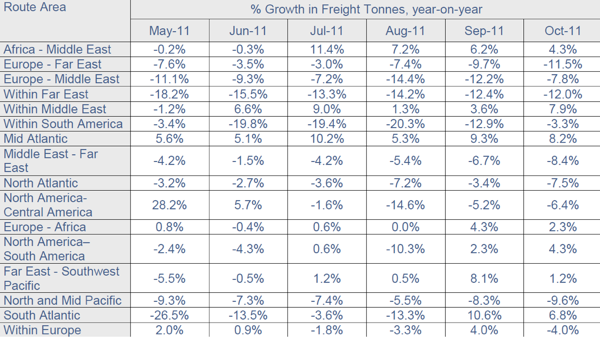