American and Alaska Airlines breathe fresh air into US competition

Although the US remains a mature market, with FSCs, LCCs and ULCCs firmly entrenched in their respective strategies, occasionally interesting developments occur.

During the past few months one of the more fascinating events was Delta’s surprise tie-up with LATAM, which is dissolving a long term partnership with American and exiting the oneworld alliance.

It appeared as if American Airlines would accept LATAM’s defection without much protest or examination of its own international strategy. But now American and Alaska Air Group have opted to cancel a planned dissolution of their relationship, and instead are bolstering their partnership to enable American to introduce new long haul service from Seattle, which is a coastal hub for Delta. It is an interesting move by American, which is in the midst of making a major push from its hubs in Dallas/Fort Worth and Charlotte.

Alaska has also pledged to become a fully fledged member of the oneworld alliance in 2021, at a time when scrutiny of the intensity of alliances is growing. Alaska has flirted with oneworld in the past, and now it seems as if the airline is ready to commit in order to bolster its position among corporate elites in Seattle.

American and Alaska Air make a conscious decision not to uncouple

After Delta and LATAM Airlines Group outlined plans for Delta to take a 20% stake in LATAM and forge a joint venture on routes between the US and Latin America, American downplayed its long standing relationship with LATAM as fairly inconsequential, noting that it had only generated approximately USD20 million in incremental revenue annually.

Not surprisingly, American now plans to forge a codeshare with Brazil’s largest domestic airline, GOL, which helps American to regain some ground lost now that it and LATAM have severed ties.

But the plans revealed by American and Alaska are definitely surprising. The two airlines had planned to sever their relationship in Mar-2020, but now are maintaining their partnership and expanding their codeshare to international flights from Los Angeles and Seattle, which is Alaska’s largest hub.

Alaska has a 57% share of departing frequencies in Seattle.

Seattle Tacoma International percentage of departing frequencies by airline, as of mid Feb-2020 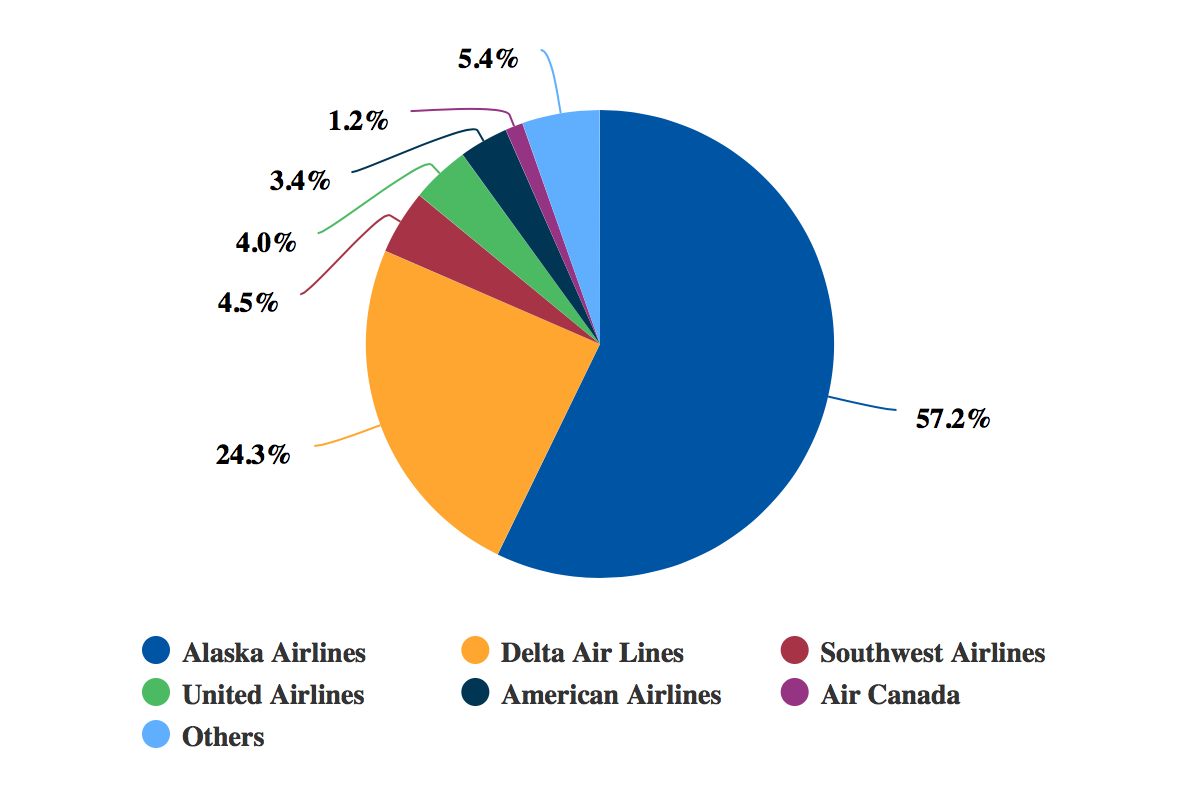 It is an interesting move by American to expand beyond its core hubs, and most of American’s focus during the past couple years has been expansion from its hubs in Dallas/Fort Worth and Charlotte, and a push from Washington National beginning in 2021. Conversely, Delta has built up focus cities in Raleigh-Durham, Austin, San Jose, Nashville and Cincinnati (a former hub).

Even as it has made a push from its largest hubs, American has concluded that Seattle provides the company a gateway “that very much complements the rest of our hubs”, said company SVP of network strategy Vasu Raja in a recent employee podcast.

Mr Raja explained that Alaska’s strength in Seattle allows American to launch international flights off a “great domestic network”. He added that the incremental growth created by the partnership is “creative in a way we’ve not seen before”.

American is particularly bullish about the new flights from Seattle to Bangalore, which is a sizeable technology hub. We’ve made no secret about wanting to go to India for a long time”, said Mr Raja.

Bangalore is the highest growth market for American’s customer base, Mr Raja concluded, but it is beyond the reach of any of the airline’s hubs with its new Boeing 787-9 widebodies.

There is only one market where American could serve Bangalore with a reasonable payload, “and that’s Seattle”, Raja concluded.

The combination of American and its partners Alaska, British Airways and Japan Airlines, “will be the largest airline network into Bangalore”, Mr Raja declared, which is the most important factor to the corporate customer, he added.

The bolstered partnership with American also helps Alaska target key corporate customers in Seattle with a broader international network to market. And although Alaska has used its strength in Seattle to build up a solid base of international partners, a fully fledged membership in oneworld allows Alaska to offer great global network depth to capture a larger share of corporate travellers that could otherwise opt for Delta, given the breadth of its network.

Data from CAPA and OAG show that as of mid-Feb-2020, no one alliance had a major share of Seattle’s departing frequencies, given Alaska’s dominance at the airport. Once Alaska becomes a member of oneworld, the alliance landscape at the airport will significantly change.

Seattle Tacoma International percentage of departing frequencies by alliance, as of mid-Feb-2020 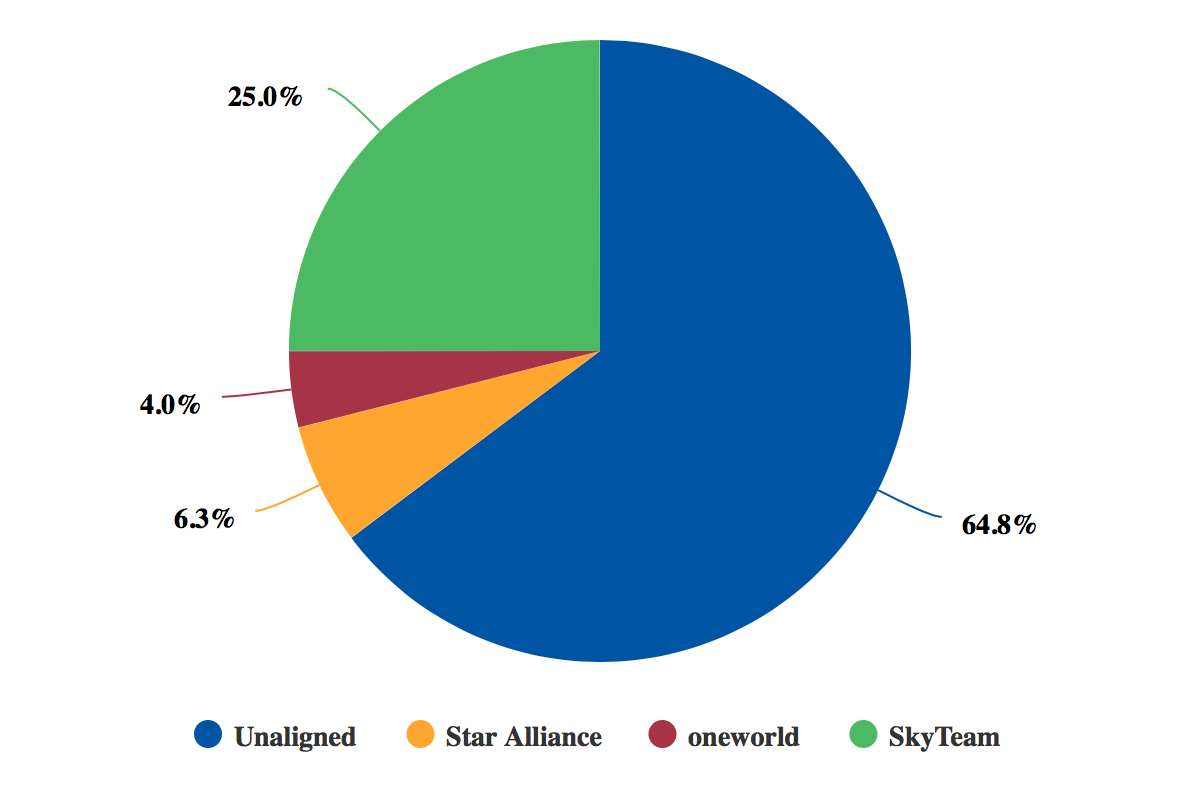 American and Alaska spring a surprise on Delta in Seattle

Although Alaska has largely preferred to remain independent, the San Francisco Chronicle has highlighted that back in 2018 Alaska was considering a secondary tier of membership in oneworld, branded as 'oneworld connect'.

At that time, the publication quoted Alaska executives who pointed out that such a move would help the airline hold on to the business of domestic customers who travel internationally, keeping them from straying to other airlines.

Broadly two years later, that rationale remains in place, but now Alaska is working towards full oneworld membership, no doubt aided by its planned deepened partnership with American.

There is little doubt that Delta will craft a competitive response to the new level of competition it will face in Seattle, but for now American and Alaska have arguably sprung a surprise on Delta at one of its key trans Pacific hubs.

In the recent past, American has not been known for making bold or surprising moves, but the developments with Alaska are a breath of fresh air in the US marketplace. There is no certainty that the deepened partnership will reap the benefits that American and Alaska expect, but American is making a distinct move in launching a major long haul flight outside one of its major hubs.

It is a level of outside the box thinking that Delta has been practising for quite some time – and now Delta finds itself in the rare situation of playing defence instead of offence.