Management at the “new” American remains bullish in the early days after the creation of the new entity following the merger of US Airways and American Airlines. Solid revenue trends for 4Q2013 and FY2013 are reported underneath a lot of merger related noise baked into its combined financial results.

Now that all the regulatory hurdles have been cleared, work is well underway at American in numerous areas including network changes entailing a rebanking of the Miami hub slated for late 2014 followed by similar moves in Dallas/Fort Worth and Chicago O’Hare. The carrier also somewhat surprisingly expects to be profitable at its Los Angeles hub in 2014 now that the combining of US Airways and American has resulted in the merged carrier narrowly becoming the largest airline in the historically fragmented market.

With the merger producing a strong cash balance in excess of USD10 billion for the new American, investors are already pressing management over potential shareholder returns and the proper cash levels the company should carry going forward. Investor curiosity over rewards and cash management could be an indication that the investment community is closely watching both the merger execution and whether promised synergies of more than USD1 billion are delivered on time. American already expects an additional USD400 million in revenue benefits from some network changes occurring in 2014 and beyond.

Combined US Airways and American generate USD40 billion in FY2013

The merger between US Airways and American officially closed in Dec-2013, which created murkiness in reporting 4Q2013 and FY2013 results for the combined entity. Management at the new carrier advises looking at combined results on a non-GAAP basis as the best indication of the company’s overall financial performance. 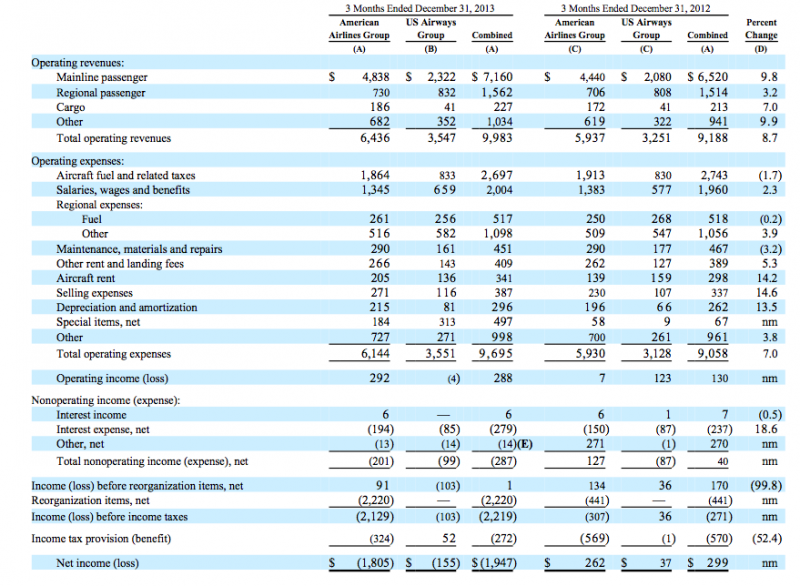 American Airlines and US Airways financials: FY2013 vs FY2012 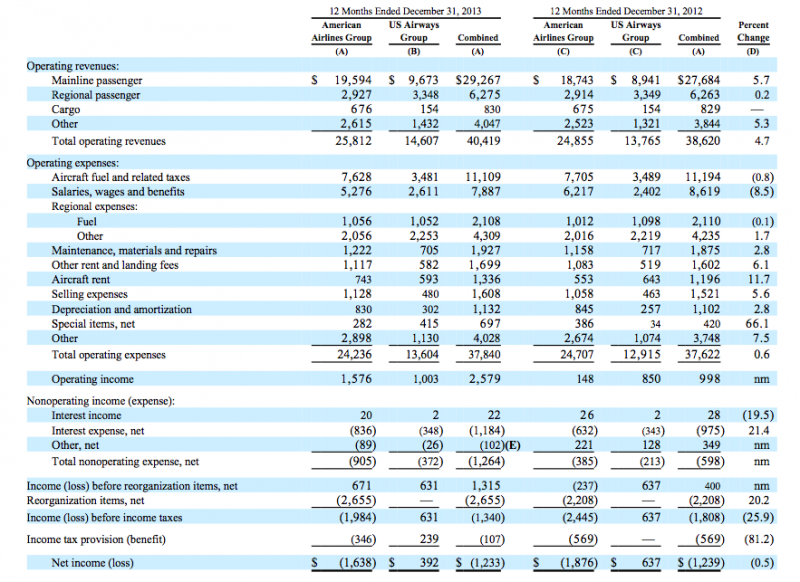 Combining the results on a unit basis, American grew its passenger unit revenues 5% during 4Q2013 driven by yield growth of 5%. Total unit revenues (which include ancillaries) also increased 5%.

During 4Q2013 Latin America was American’s (again on a combined basis – American and US Airways) best performing entity as an 8% increase in yields boosted revenues by 9% year-on-year. Prior to the merger American was the largest carrier between the US and Latin America, so the strong results reflect American’s large presence in the region and likely some benefits from a new codesharing agreement with Brazil’s largest carrier TAM, which is now oneworld partner to American after its merger with LAN.

American and US Airways separate and combined unit revenue results by regional entity: 4Q2013 vs 4Q2012 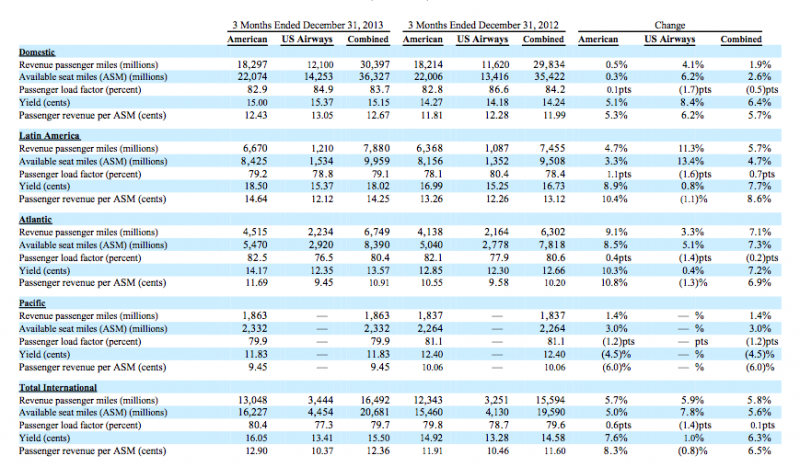 For FY2013 the trans-Atlantic was the new American’s top geographical entity as 7% yield growth drove an 8% rise in passenger unit revenues. In the US domestic market, American’s second best performer for FY2013, yields and unit revenues both increased roughly 3%.

American president Scott Kirby remarked to investors that the combined corporate revenue of the carriers grew 7% year-on-year during 4Q2013; however, he admitted American on a stand-alone basis has lost some corporate share during the last couple of years. He concluded that American will win back some of its natural corporate share, but stressed that no assumption of the carrier gaining share or taking corporate share from other carriers is included in its guidance, which shows a 2% to 4% unit revenue increase for 1Q2014.

American and US Airways separate and combined unit revenue results by regional entity: FY2013 vs FY2012 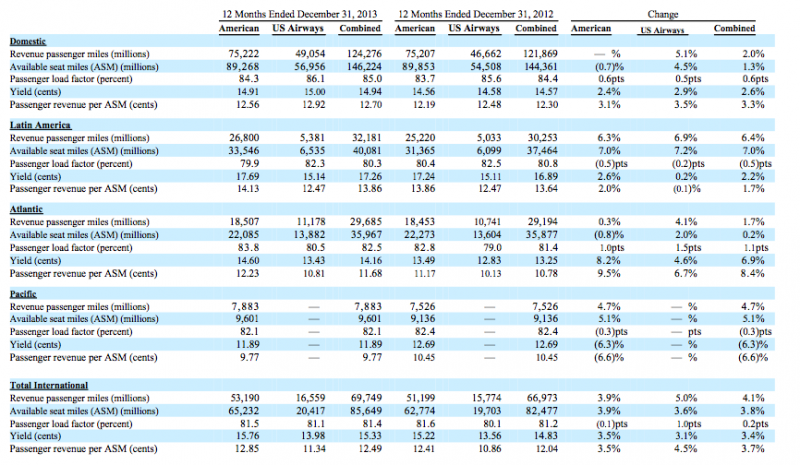 Rebanking is in store for American’s Miami, DFW and Chicago hubs

Just a few weeks after the Dec-2013 close of the merger, American has already opted to make some tweaks to the network including rebanking hubs in Miami, Dallas/Fort Worth and Chicago. Changes begin in Miami with the fall 2014 schedule, followed by the other two hubs in subsequent scheduling roll-outs.

Mr Kirby estimated the hub rebanking, in conjunction with introducing variable scheduling at legacy American Airlines operations and increased seat density on Boeing 737-700s, MD80s and 777-200s, should fetch more than USD400 million annually in earnings improvement beyond the previously estimated merger synergies of roughly USD1 billion. American plans to boost seats on the 737-800 narrowbodies from 135 to 140 and from 247 to 260 to 289 on the 777-200s through the addition of slimline seats. At YE2013 American operated 47 777-200s and 226 737-800s.

Other network adjustments underway also include some changes at New York LaGuardia to focus on more profitable flying, said Mr Kirby. Beginning in Apr-2014 American is cutting some service to larger markets and intensifying competition with Delta as it reintroduces some markets from LaGuardia that were previously operated under the US Airways banner.

American predicts solid profits in the fragmented LA market during 2014

Mr Kirby expressed a marked positive view for American’s Los Angeles network, noting that combined the two carriers now have the largest airline at the airport. Data from OAG for the week of 27-Jan-2014 to 2-Feb-2014 show that American accounts for 18% of the seats deployed from Los Angeles, followed by United with a 17% share and Delta with 14%. On an ASM basis, American holds a 14% share compared with 13% for United and 11% for Delta. 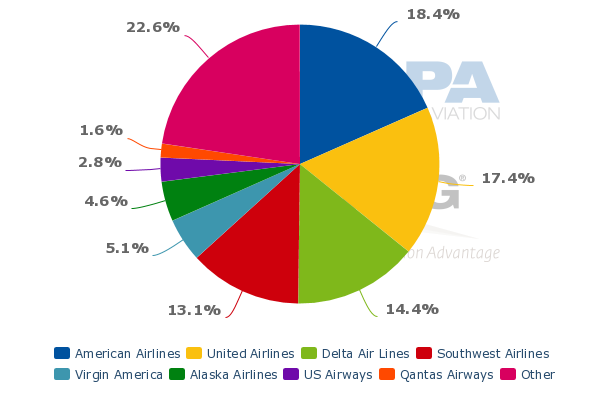 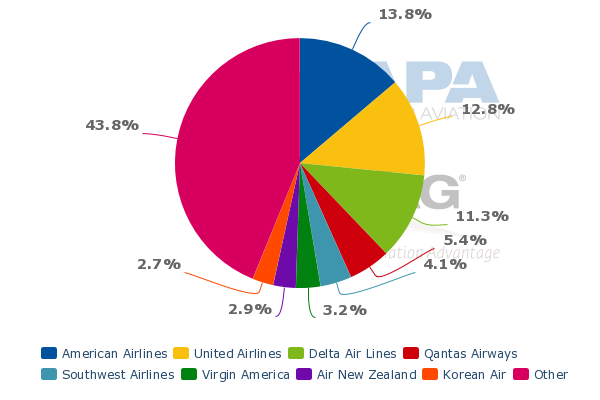 Given the historical fragmentation in Los Angeles, it has been tough for most carriers to produce favourable results in the market. But Mr Kirby definitively declared that Los Angeles would be “nicely profitable” for American during 2014 given its penetration of the premium market in Los Angeles.

American predicts increases in capacity and unit costs in 2014

American expects its consolidated capacity to grow 3.5% during FY2014, which is higher than the 1% to 2% rise planned by United and the flat to 2% growth anticipated by Delta.

Mr Kirby assured investors the higher supply growth was no cause for concern as he explained 2.6ppt of the planned increase is from the operation of higher density aircraft. He concluded adding seats to aircraft is P&L positive since the cost of the extra seats is relatively low and the incremental revenue from the higher-density configurations more or less goes straight to a company’s bottom line. The other drivers in the capacity increase are fewer aircraft undergoing maintenance during 2014 and the assumption that American will have a higher completion factor than in 2013.

In the case that overall market conditions weaken, Mr Kirby noted that American has a very large fleet of 767s scheduled for retirement, and the exit of those aircraft from the fleet could be accelerated if necessary. Presently, American’s fleet projections show its fleet of 767-200s will drop from 19 to 7 between YE2013 and YE2014 while its fleet of 767-300s remains flat at 58 aircraft.

At this point American is hesitant to predict where it will fall in the guidance of a 2% to 4% rise in unit costs. Company CFO Derek Kerr explained that since the merger closed in Dec-2013 (delayed a few months due to a legal challenge from the US Department of Justice) that each carrier developed separate budgets and now those calculations need to be examined to understand the budgeting and expense undertaken by US Airways and American. If American’s unit cost increase falls closer to 2%, it would be in line with its US legacy peers Delta and United.

American has no plans to change its extensive aircraft order book

American CEO Doug Parker stresses there are no plans at the moment to alter the orderbooks of the combined carriers (which includes a massive narrowbody order placed by legacy American in late 2011). According to CAPA’s Fleet Database American has 567 aircraft on order, which will result in outsized capital expenditures relative to its legacy peers during the next few years.

Mr Parker said legacy American seriously needs fleet upgrades and the investment the merged carrier is making in aircraft is not something the company's management is concerned about. He believes spend on new aircraft is a wise use of capital.

American is studying the wisest use of cash deployment

How American intends to use the USD10.3 billion in cash it had on hand at the end of 4Q2013 has not been determined even as executives are fielding questions from investors over shareholder returns.

Mr Parker acknowledged that “holding more cash than we need is not a good use of shareholder capital”, but emphasised American is attempting to determine the best use of cash, explaining there is debt that could be paid down or restructured.

In terms of optimal cash levels American’s CEO observed that historical benchmarks of 20% to 25% of revenue could be too much for a transformed industry. However, he cautioned that there needs to be the assurance that the airline industry has truly transformed, a still-open question.

Mr Parker’s caution in declaring the US airline industry has completely transformed is encouraging as the real work has started in integrating American and US Airways. It is entirely too early to make any conclusions regarding the “new” American’s fate.

But for the moment management seems to be taking a rational approach to the complex process of combining too carriers, half-joking about a strategy of being conservative in its synergy estimates in order to over deliver.

Having learnt lessons from one completed merger and one failed merger attempt, top executives of American (largely comprised of US Airways’ top executives) perhaps know better than to declare lofty goals before the complexities of integration set in. Hopefully that mindset will remain intact as American now charts a course to become a true competitor to its US legacy and global network rivals.