Delta Air Lines maintains its financial edge with a strong 4Q2013, but its peers are still not safe

Delta Air Lines lived up to its stated expectations for 4Q2013, executing a strong performance in profitability and cash flow generation. Building on that momentum its outlook for the near term looks favourable, buoyed by strong corporate demand in the US domestic market.

Despite some lingering cost creep and a still-weak performance from its oil refining business, Delta is poised to continue its momentum in 2014 as the correlation between revenue and fuel charges, with revenues expected to continue to rise even thought oil prices for the moment are falling.

Echoing previous comments about sustaining its current favourable financial momentum, Delta stresses it has no intention of resting on its laurels – and believes its long terms goals of a 10%-12% annual operating margin and operating cash flow of USD5 billion are well within its reach.

Delta boosts net and operating profits for 4Q2013 and FY2013 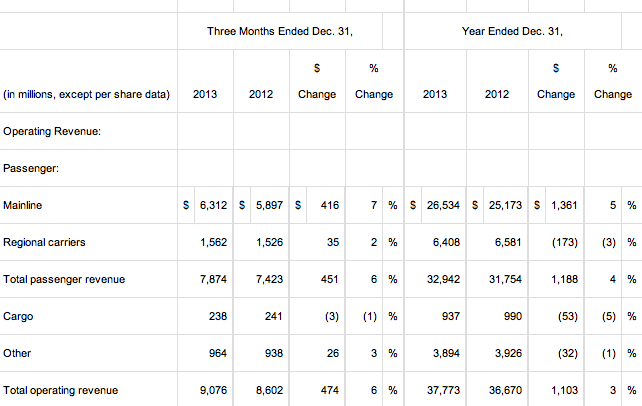 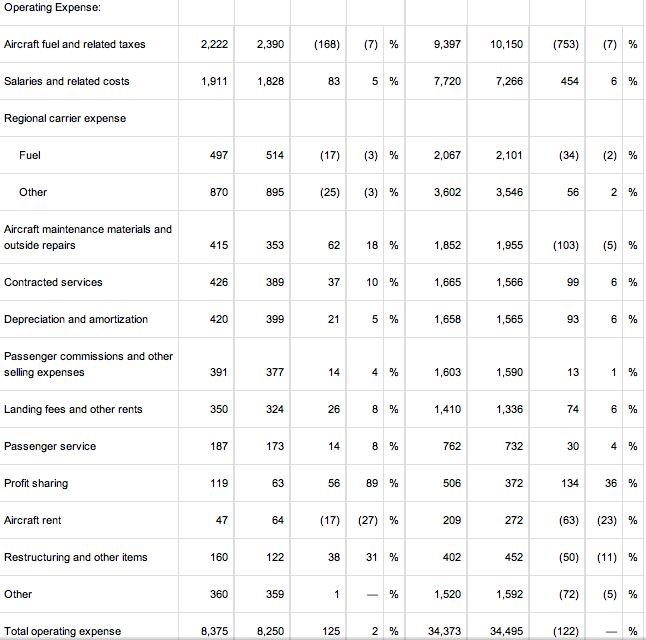 On a unit basis Delta’s costs excluding fuel in 4Q2013 rose by 1% and 2% for FY2013 to USD9.29 cents and USD9.14 cents, respectively. Company executives highlighted the 2% rise in ex-fuel unit costs was three points better than Delta’s projections at the beginning of 2013.

During FY2013 Delta generated USD5 billion in free cash flow, which is a target the carrier has laid out for the long term as it works to achieve and sustain investment-grade status.

Delta’s revenue performance on a unit basis was solid during 4Q2013 as yields grew 4% and unit revenues increased 3% on a 2.9% rise in capacity. 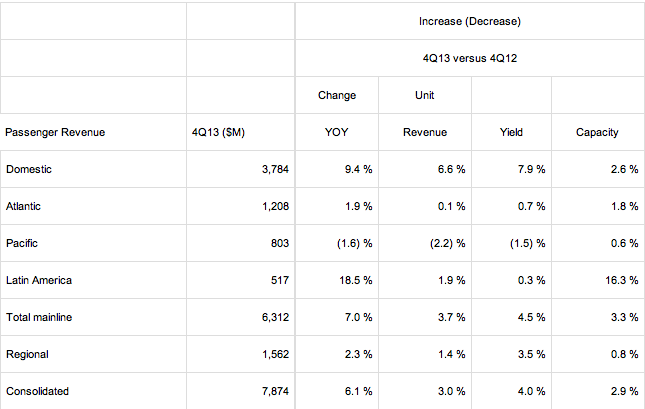 The US domestic market was Delta’s top performing geographical entity during 4Q2013 as nearly 8% yield growth pushed unit revenues up 6.6% on a 2.6% rise in capacity. Carrier president Ed Bastian attributed Delta’s strong performance in the domestic space to strong holiday demand in Nov-2013 and Dec-2013 and strength in the New York market. Mr Bastian said LaGuardia recorded a 15% increase in unit revenues year-on-year during 4Q2013.

Delta chief revenue officer Glen Hauenstein stated that all the effort the carrier has exerted during the past five years to improve its stature in the New York market was starting to pay off. He believes corporate spend is a significant factor in Delta’s improvement in New York, particularly in the banking sector.

CEO Richard Anderson stressed that the banking community has shown a particular interest in Delta’s newly minted joint venture with Virgin Atlantic, given the carriers operate a competitive shuttle product between New York and London Heathrow. Combined, Delta and Virgin Atlantic offer seven daily nonstop flights from JFK to Heathrow and two from Newark to Heathrow. As of Mar-2014 oneworld partners American and British Airways will offer roughly 14 daily flights between JFK and Heathrow. During 1H2013, prior to the joint venture taking effect, Delta estimates it netted USD25 million in revenue from a codeshare with Virgin Atlantic.

JFK still is not a profitable operation for Delta, but Mr Hauenstein believes the pieces are coming together to reverse fortunes at its second New York hub. Delta’s ongoing project to shed 50 seat jets should allow Delta to place a more efficient aircraft to serve JFK’s feeder markets while partnerships with Aeromexico, Gol and Virgin Atlantic will also improve JFK’s financial performance.

Even as all three major US carriers – American, Delta and United are offering lie-flat seats on transcontinental US flights, Mr Hauenstein insisted that Delta will have the most coach seats on offer between New York and San Francisco and Los Angeles, another factor he concludes that will improve JFK’s performance within Delta’s network.

Delta throughout the past year has been battling weak demand in the trans-Pacific triggered by the yen weakness. While the carrier is in the midst of de-emphasising its Tokyo operations, the currency challenges drove Delta’s trans-Pacific yields down 1.5% year-on-year in 4Q2013 while unit revenues dropped 2.2% on essentially flat capacity.

Mr Bastian remarked the lacklustre demand resulted in a USD65 million revenue hit for Delta during 4Q2013 and USD250 million for FY2013. The carrier has been able to deflect some of the revenue drag through currency hedging and savings from its yen-denominated costs.

At the onset of 2014, Mr Hauenstein concluded that industry capacity in the trans-Pacific, particularly Japan, is improving, noting for the first time in three years industry supply in Japan will fall during the peak summer months. Delta believes the yen is starting to stabilise, which together with rational capacity should “provide a good tailwind in the summer for Japan”. Delta has the largest exposure to Japan as it presently (19-Jan-2014 to 25-Jan-2014) accounts for 26% of the one-way seats on offer, so any relief in currency pressure is likely welcomed by the carrier. 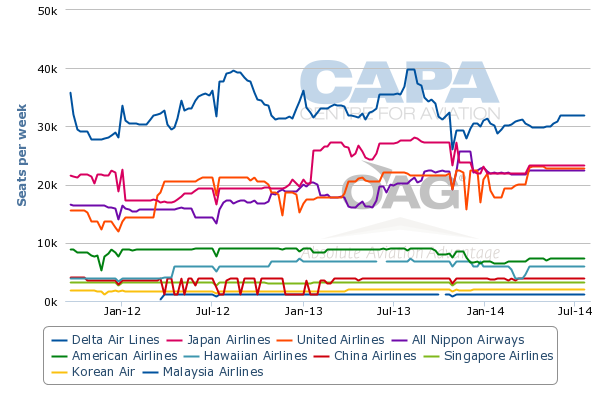 Delta’s outlook for Europe is somewhat different, as Mr Hauenstein concluded the carrier sees “a little more capacity” than it likes in the region. Capacity for the winter time period is running somewhat ahead of the last few quarters and beyond GDP forecasts, said Mr Hauenstein. 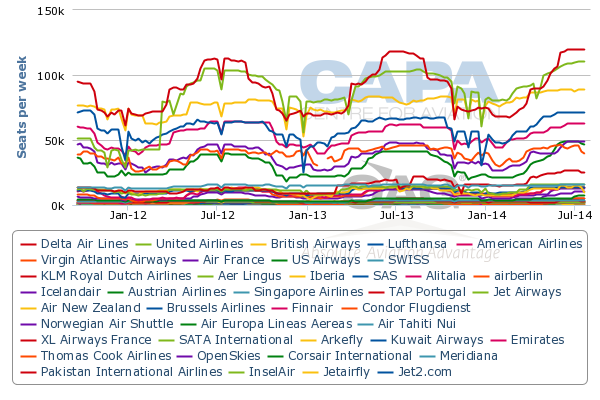 Delta during most of 2013 tempered its expectations for its Trainer oil refinery as the entity only turned a modest profit of USD3 million during 3Q2013. During 4Q2013 the operation generated a USD46 million loss and USD116 million loss for FY2013, with a modest loss projected for 1Q2014.

The carrier now projects a modest profit from the refinery after increasing the output to higher-value distillate fuels by about 40%. The refinery should also reach an average output of 70,000 barrels a day for FY2014.

At this point, the activity remains a questionable venture. Undoubtedly sweetened by a generous government subsidy, the Trainer purchase has served more to distract attention from the main game than to add to the bottom line or reduce risk. Given all the shuffling that has occurred with the business during the past year, it is safe to bet that it will take Delta longer than anticipated to recoup its investment, if ever, and the expectations that Trainer would help to lower Delta’s overall fuel bill become increasingly subdued.

Delta is running on all cylinders; but its US peers need to prove their mettle

Delta’s overall commentary at the start of 1Q2014 remains bullish as corporate demand in the US space continues to remain strong. The carrier estimates its operating margin should range between 6% and 8% on 2%-3% capacity growth. While its unit costs during 1Q2014 could grow up to 1.5% year-on-year, Delta believes its unit costs growth will still fall under 2% for FY2014, which is in line with its long-term goals and outlook.

Delta’s solid financial performance remains encouraging, and Mr Anderson assures more can be done to improve its fortunes. For the moment Delta continues to enjoy an overall financial advantage over its US peers, and it intends to leverage its edge as much as possible. But it is still too early to conclude that overall the US industry is on a path to consistent profitability.

The building blocks appear to be in place, but the new American and United which have languished during the past year, have much to accomplish before the sceptics will be convinced that the US airline business has truly turned a corner. 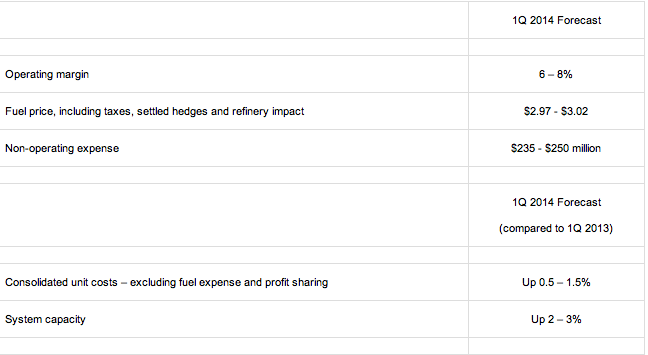