The new American Airlines is adding another layer of competition in New York with its legacy rivals Delta and United when it launches service from LaGuardia to 10 small markets in Apr-2014 in conjunction with the axing of three larger markets from the airport.

American’s shift is the result of a requirement by the US Department of Justice (DoJ) that American and US Airways, who recently solidified their merger, divest 17 slot pairs at LaGuardia. The relinquishing of slots, which includes 52 pairs at Washington National, was part of a settlement reached after DOJ sued in 2013 to block the merger.

Technically the cities American is adding from LaGuardia are not new. US Airways served many of the 10 markets prior to executing a slot swap with Delta Air Lines in which Delta obtained 132 slot pairs at LaGuardia from US Airways. After ceding the slots US Airways focussed during 2012 on building up Washington National, utilising 42 slot pairs it acquired from Delta at the airport. Now, somewhat ironically, US Airways and Delta will find themselves competing anew on some markets from LaGuardia.

American opts to exit markets dominated by other legacy airlines

Fresh from closing the deal on their merger, American and US Airways, now the new American, tabled route changes from LaGuardia and Washington National as a result of the required slot divestitures. (Note a second analysis will examine the changes at National.)

Southwest and Virgin America are acquiring the slots American is divesting at LaGuardia, while the winners of slots at National should be revealed in the not too distant future.

American has opted to end service from LaGuardia to Atlanta, Cleveland and Minneapolis, which are seemingly logical cuts given Atlanta and Minneapolis are hubs for Delta and Cleveland is a hub for United.

Data from OAG for the week of 13-Jan-2014 show Delta represents roughly 67% of the approximately 23,188 one-way seats on offer between LaGuardia and Atlanta while AirTran and Southwest combined represent approximately 21%. American only has a 12% share, so in light of the slot divestiture the carrier likely concluded that the capacity used in Atlanta could be more profitably deployed.

Cleveland has a similar service pattern as United represents 56% of the approximately 4,892 weekly seats deployed from the airport. United also serves its Cleveland hub from its primary hub in New York – Newark Liberty.

From Cleveland to LaGuardia, Both American and Delta represent approximately 22% of the seats on offer. With American having the same seat capacity on offer as Delta, and given Cleveland is a hub for United, the margins between LaGuardia and Cleveland are likely to be slim.

Obviously Minneapolis is dominated by Delta from LaGuardia, with the carrier holding 79% of the 7,708 one-way seats on offer. American holds the remaining 21%. Once American exits the pairing, the market will become a monopoly for Delta.

According to schedules in OAG, US Airways previously served eight of those markets – Louisville, Norfolk, Richmond, Roanoke, Wilmington, Charlottesville, Dayton, Greenville – prior to the slot swap with Delta and the merger with American. On service from LaGuardia, Delta is the sole operator in nine of those markets, and United offers flights in six of the markets from its Newark hub.

OAG data show that Dayton, Roanoke, and Charlottesville are among the smallest markets served by Delta in terms of seats on offer, with just roughly 250 weekly one-way seats in each market. Delta is ending service from LaGuardia to Roanoke in Feb-2014, citing low usage, according to a report in local Virginia newspaper the Richmond Times Dispatch.

The publication stated Delta’s flights in the market during Nov-2013 (flown with 50-seat jets according to OAG), were 25% full. US Airways accounts for about 49% of the seats on offer from Roanoke, so perhaps the carrier sees more upside in Roanoke than Delta. Richmond and Greensboro are the largest in that metric. Delta offers 1,555 one-way weekly seats to Richmond and 1,147 to Greensboro.

Overall, the 10 routes added by American are markets that likely draw business travellers to the “very rich and high-yielding local New York City market”, Delta chief revenue officer Glen Hauenstein recently concluded. It seems that American has drawn the same conclusion, betting that perhaps it can challenge Delta in some markets where it has been operating less than two years. The new American has ample understanding of the markets dynamics of most of the routes given US Airways served a majority of the routes prior to the slot swap.

American has made its moves at LaGuardia just as Delta recently declared that 2014 should be the year that its hubs in New York – LaGuardia and JFK – turn the corner to profitability after losses several years ago fell in the range of USD600 million to USD700 million.

It is not likely American’s route additions in LaGuardia will create a huge threat to Delta’s aspirations of profits in New York, but perhaps it is reflective of the jockeying that will ensue as each of the three major airlines works within constraints of slot restrictions in New York to ensure they are offering service to high-yielding business markets.

Both Delta and United during the last few months have claimed supremacy in New York.  Delta touts that during summer 2014 its total weekly seat departures will outpace those of United, American and JetBlue. While United estimated in CY2013 it offered 451 daily departures from New York compared with 417 for Delta and 208 for American. 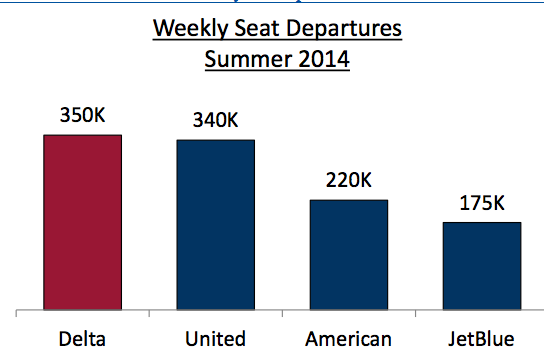 Of the three carriers, American has the smallest footprint in New York in terms of seat deployment. On a combined basis American and US Airways account for roughly 32% of the seats on offer from LaGuardia, nearly 18% at JFK and almost 6% at Newark. The slot divestitures will have little effect on American’s overall stature in New York. 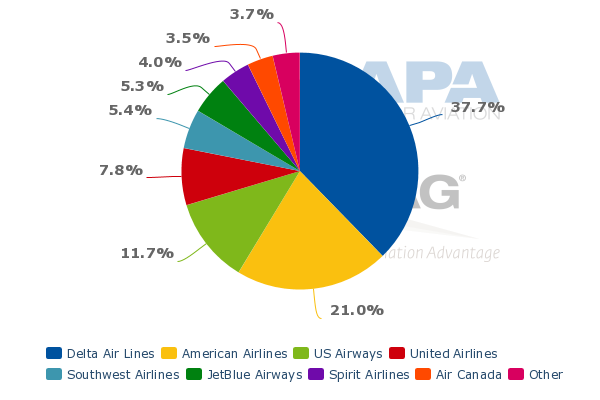 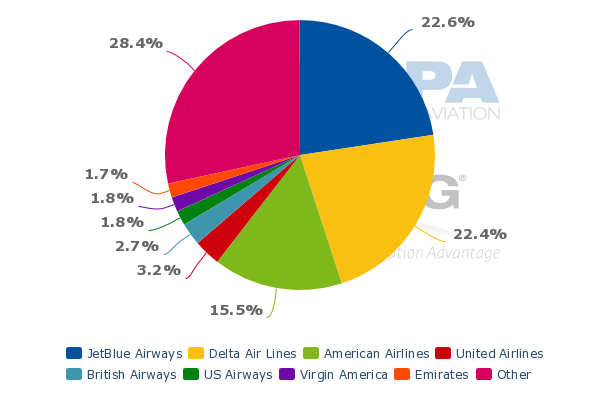 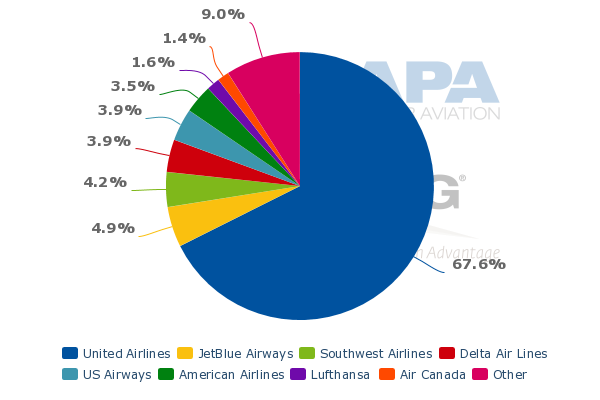 While Delta is the dominant carrier at LaGuardia (the closest airport to Manhattan), on a combined basis the new American is not far behind Delta with respect to seat deployment (32% for American-US Airways and 35% for Delta). It is a likely bet that as American and US Airways continue to optimise their combined networks, American and Delta will be bumping into one another in more markets from LaGuardia.

American through its oneworld partnership and joint venture with British Airways also has the advantage of the most favourable schedule between New York and London Heathrow, which also remains a threat to Delta even though Delta is trying to narrow the competitive gap with its new joint venture with and part ownership of Virgin Atlantic.

Competition in New York will only intensify in future, as each of the three major US network carriers works within the operating constraints of each airport to ensure they are capturing ample corporate share.

The competition, as it always has been, will be intense. But with Delta’s transition in New York largely in place, United’s stature at its Newark hub and efforts by American and US Airways to optimise their combined networks, each airline will solidify its position in New York and its offerings to corporate travellers. As the competition grows, sustaining profits in New York should prove to be tough for all carriers clawing for the ever-important business traveller. So at least there will be one group of beneficiaries of the added levels of competition.