United Airlines ends 2013 on a positive note; now the challenge is to sustain the momentum

United recorded commendable financial results for 4Q2013 and FY2013, as the carrier recorded its highest profitability for 4Q since merging with Continental in 2010. The results were encouraging given the operational and financial obstacles the carrier encountered in FY2012.

The airline has declared that 2013 was the year it moved past its integration, and built a foundation on which to grow, presumably into a scenario of consistent profitability. While United may believe its integration challenges are still in the rear-view mirror, there are considerable outstanding labour issues, notably a joint contract for the airline’s flight attendants.

In the short term United appears to be keeping its momentum despite some fall-out from the Jan-2014 winter storms that triggered more than 6,000 flight cancellations for the carrier. After some revenue weakness during 2013, United believes a recalibration of its revenue management system should continue to accelerate yield improvement through 1H2014.

United reverses losses and returns to profitability in FY2013

Including special charges, United recorded net income of USD517 million for FY2013, an improvement from the USD723 million loss recorded the year prior. The carrier also improved its fortunes year-over-year for 4Q2013, swinging to a USD140 million profit (including special items) compared with a loss of USD620 million for same period in 2012. 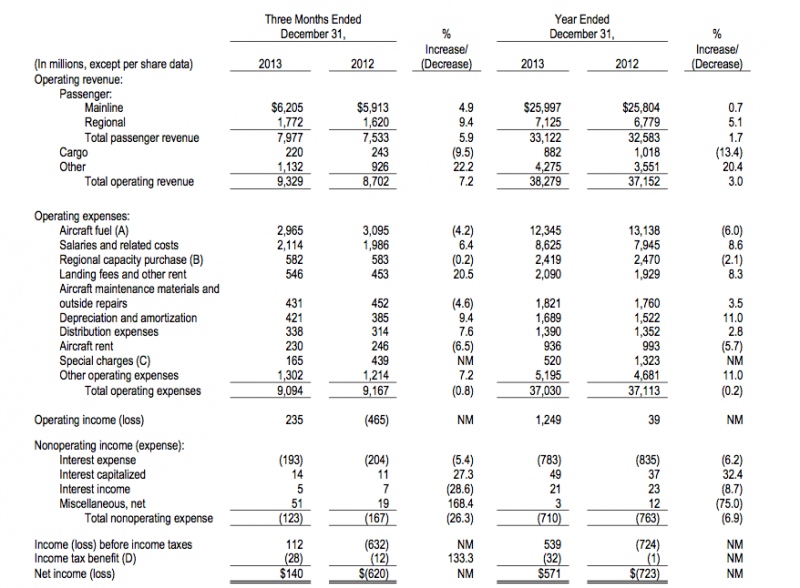 United achieved its return on invested capital target of 10% during FY2013, one of the three goals that carrier CEO Jeff Smisek said the company had set for the year. He stated United also improved its reliability (posting an on-time performance of 80.6% in 4Q2013), and improved customer service.

The US domestic market is the top performer among United’s geographies, applying flexible capacity measures

Similar to Delta, the US domestic market was United's best performing regional entity during 4Q2013. United’s domestic yields increased 3.8%, driving a 4.5% unit revenue increase on a 2.5% rise in capacity. The carrier attributed the strong performance in the domestic market to robust demand during the holidays in Nov-2013 and Dec-2013, United chief revenue officer Jim Compton explained the airline flexed-up its capacity by roughly 20% on peak days, and drew down its supply by approximately 40% on off-peak days.

Weakness continued in the carrier’s trans-Pacific markets, driven by devaluation of Japan’s currency. Yields in United’s trans-Pacific markets fell 1.6%, which drove unit revenues down 5% as capacity increased 2.4%. Carrier CFO John Rainey estimated the currency challenges contributed roughly a half point decline to United’s consolidated unit revenues during 4Q2013. He explained United is 30% hedged during 2014 against yen deflation, “at a little bit less than where the market is today. So it is a slight gain position.”

United’s corporate revenues increased 7% year-on-year during 4Q2013 as the carrier began to reap some of the benefits of changes to its revenue management system to place more emphasis on higher-yielding, close-in bookings. Miscues in United’s forecasting resulted in United recording a weaker unit revenue performance in 3Q2013 than its US legacy peers. At that time United explained it was updating its forecasting mechanisms to favour more close-in bookings. Mr Compton remarked that the favourable yield trends would continue through 1H2014. 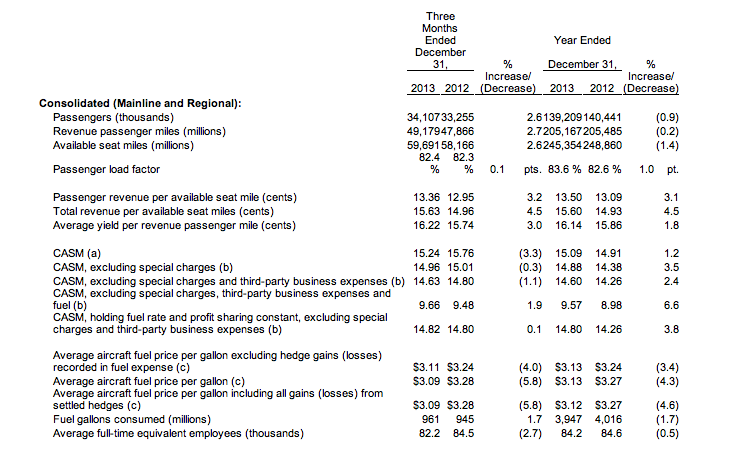 Some cost headwinds are forecast for 1Q2014 and FY2014 driven in part by higher labour costs, increased airport and landing fees and a rise in engine overhauls. United expects its unit cost excluding fuel, third party business expense and profit sharing to increase by 3.5% to 4.5% in 1Q2014 and 1%-2% for FY2014.

Attempting to justify some of the lingering cost creep, United CFO John Rainey concluded: “The investments we are making in our fleet, product and technology are critical to achieving the cost savings we’ve outlined and the returns our shareholders and management team expect.”

After three consecutive years of capacity decreases (including a 1.4% drop during FY2013), United plans to expand its supply during FY2014 by 1%-2% largely through upgauging aircraft and adding slimmer seats to existing jets. 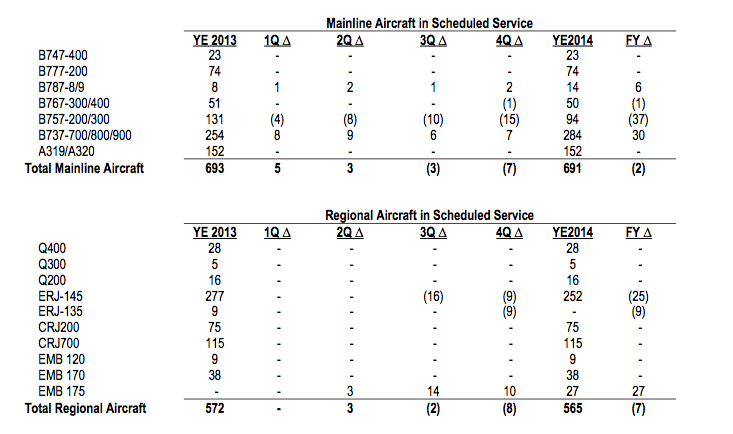 The carrier plans to launch several long-haul flights in 2014 including new service from San Francisco to Chengdu and Taipei; Houston to Munich; Chicago to Edinburgh; and Washington Dulles to Madrid. The new service to Asia is part of United’s evolving trans-Pacific strategy to launch service to secondary markets.

United does expect some unit revenue pressure in 1Q2014 as it estimates unit revenues to be flat to up 2%. Mr Compton estimated that the effect of winter storms in early Jan-2014 would negatively affect CASM by 0.4% for the quarter and the shift of the Easter holiday from Mar-2013 to Apr-2014 would dampen unit revenues by a single percentage point. He remarked that the severity of the weather crimped business travel, especially at United’s Chicago hub. Presently the carrier estimates a USD60 million hit in revenue from disruptions triggered by the storms.

United should maintain some caution in setting lofty financial targets

United’s financial results for 4Q2013 and FY2013 are no doubt a welcome change from the brutal challenges it endured during 2012. While the airline still faces some unit cost headwinds, United is applying similar logic that Delta used in 2012 and 2013 when it encountered unit cost pressure – the upfront investment is necessary to achieve long-term return and cost reduction goals.

The strategy appears to be working for Delta, but after many missteps in its merger integration, the outcome of United’s efforts to pare down costs and consistently deliver on its return goals at this point is anyone’s guess.

Even as the carrier believes that it will turn a corner in 2014 with respect to its profitability and cost cutting goals, the proof is always in execution, which arguably has not been United’s strong suit in the recent past.