The saga that ensued after the US Department of Justice in Aug-2013 sued to block the merger between American Airlines and US Airways is now officially over. Arguably, not too much will change once the conditions of the settlement are implemented - which begs the question of why the two sides did not act more responsibly in the first place to prevent a protracted and futile legal exercise that only added extra expense to the already expensive proposition of combining two airlines.

The whole affair smacks of wasteful macho grandstanding. In the end, only limited concessions were imposed - but presumably the airlines had not been prepared to concede them in negotiations - and nobody comes out of this looking clever.

The bulk of the concessions agreed to by American and US Airways – slot divestment at Washington National Airport – was not surprising since speculation was rampant that the carriers would likely have to shed some slots at the airport in order to move forward. While American and US Airways opted to stick to their bullishness that no divestment was necessary, in the end holding stubborn to their beliefs resulted in a three month delay of the merger moving forward – hardly responsible behaviour for a company that is attempting to build a powerful global carrier.

American and US Airways explained that the required divestitures of 52 slot pairs at National (eight of which are already leased to JetBlue) essentially represents 15% of the combined slots at the airport. American CEO Tom Horton concluded that even after the divestiture the “new” American would actually offer more service from National than US Airways prior to the merger. In its argument that the merger would be detrimental to consumers, particularly at National, the DOJ estimated that combined American and US Airways would hold 69% of the available slot pairs at National.

Based on those numbers, once the divestiture is complete, the merged carrier will still hold roughly 54% of the slot pairs at National. At the end of this ordeal, 15% seems like a small concession, and perhaps one that could easily been agreed to without the circus that ensued with the DOJ’s lawsuit.

In fact, Mr Horton remarked: “I don’t think the settlement is terribly different from what we had anticipated early on...I think it is a reasonable settlement” - begging the question of why reasonableness was not previously on the table.

Prior to the merger, the two carriers operate roughly 294 flights from National; post merger, it will drop to approximately 250.

Once the bankruptcy court overseeing American’s Chapter 11 reorganisation gives its blessing to the settlement, the slots at Washington National and 17 slot pairs at New York LaGuardia will be available to acquirers.

US Airways explained it expects the DOJ would provide it and American with a qualified list of buyers, and only anticipates that low-cost carriers will be allowed to vie for the slot openings even though Delta Air Lines has expressed an interest in the available slots. It was only during 2012 that Delta began building up New York LaGuardia in full force after it traded 42 slot pairs to US Airways at National for 132 held by US Airways at LaGuardia.

The theory, of course, is carriers like JetBlue and Southwest Airlines would ensure that competition is sustained in larger airports such as National and LaGuardia. In prepared remarks DOJ assistant attorney general Bill Bauer commented that since JetBlue launched flights from National with eight slot pairs leased from American, fares to Boston dropped 30% and consumers saved USD50 million per year. Obviously that’s a boon for consumers on the Washington-Boston pairing, but as CAPA previously reported average domestic fares at National during 1Q2013 were USD372, just USD6 below the overall average domestic fare of USD378 in 2012.

If JetBlue and Southwest succeed in gaining more slots at National and/or LaGuardia, neither carrier will have a dominant position at either airport, so the conclusion that average fares will fall drastically is perhaps short-sighted. Combined American and US Airways have a 35% share at New York LaGuardia.

The slot divestiture will result in 12 fewer daily departures from the airport, which hardly gives low-cost carriers a giant opportunity to affect overall average fares at the airport. Combined, American and US Airways will operate more than 160 daily flights from LaGuardia post merger. Phoenix, which is Southwest's sixth largest market in terms of daily departures (and a US Airways hub), averages about 168 daily flights. 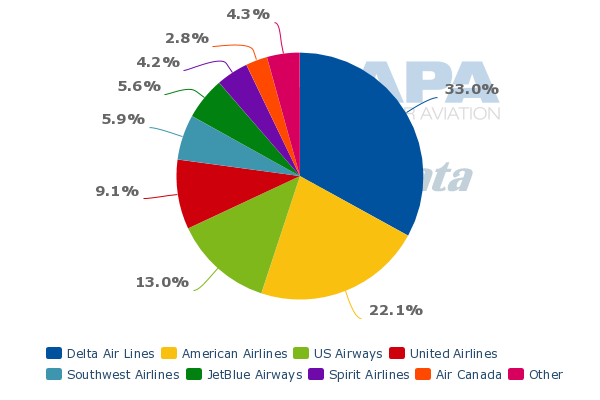 The notion that Southwest still has a stimulative effect is also outdated as the carrier’s average fare in 3Q2013 increased 11% year-on-year. While some of the rise stems from an increase in stage length, the carrier did admit that during 2013 is has used less sale activity.

Another element of the concession deal is American and US Airways agreeing to keep commuter slot pairs at Washington National for use to small and medium-sized markets operated by jets with 76-seats or fewer.

While the move is a nod to allaying concerns expressed by members of the US Congress earlier in 2013 to ensure service to smaller markets would not suffer as a result of the merger, the reality is no low-fare carriers will enter those markets, and as results, fares will remain status quo.

Essentially, the combined new American will keep monopolies on those smaller markets as JetBlue and Southwest do not operate aircraft that are viable for service on routes such as Fayetteville, Arkansas. The reality is while service remains intact to those markets, the merged carrier’s monopoly status allows the new American to set its own prices on the routes, hardly a boon for consumers.

None of the concessions will shrink the 'new' American post merger

Rounding out DOJ’s demands are the divestiture of two gates and related facilities at Boston, Chicago O’Hare, Dallas Love Fields and Miami International airports. Those are hardly sweeping changes that will affect American’s size after the merger, which means that it will emerge with nearly a combined 23% market share in the domestic US, based on data from the US Department of Transportation. 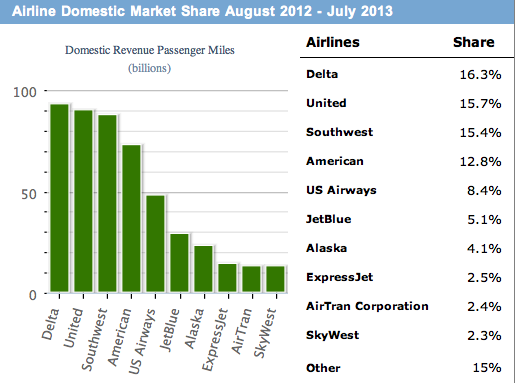 American and US Airways have also agreed to preserve current service at so-called historical levels for three years at hubs in Charlotte, JFK, Los Angeles, Miami and Chicago. Again, this concession is interesting given that it will take nearly three years for the carriers to achieve and understand how to optimise the combined network (just ask United), and really doesn’t provide much consumer benefit given the combined carrier will be dominant at all of those hubs except JFK and Los Angeles.

In a bid to please the attorney generals of the states of Arizona, Texas, Florida, Virginia, Michigan and Tennessee, American and US Airways agreed to continue to provide daily service from one or more of the combined carrier’s hub airports for five years. Given those states are home to some of the larger US metropolitan areas, this again, is not a huge concession for the 'new' American to make.

Absent from the settlement agreement was any reference to US Airways’ Advantage fares, which garnered considerable scrutiny in DOJ’s initial lawsuit. The DOJ argued the elimination of those fares (which in some cases are 40% cheaper for last-minute travel) would be detrimental to millions of consumers. Apparently, that concern has vanished from the DOJ’s mindset.

While the DOJ is claiming victory in the settlement it reached with the carriers, the agreement does little to change the competitive landscape in the US domestic market. So it is tough to congratulate the agency for making strides in consumer protection when the ultimate result is perhaps lower fares on routes from National and LaGuardia to larger metropolitan areas.

If this exercise was ultimately about the relinquishing of slots at National, both sides acted somewhat irresponsibly by creating a legal cloud that ultimately froze merger proceedings for three months, needlessly created expense for American and US Airways and wasted taxpayer funds for an outcome that is hardly victorious for the DOJ.  Each side showed a certain level of recklessness by not agreeing to work out a settlement from the beginning.

The 'new' American needs to focus on the larger global picture, as Tweedledum and Tweedledee forget their quarrel

So it looks as if the silly "Tweedledum and Tweedledee" battle is now over.

It is hard to avoid the conclusion that, apart from considerable ill-judgment on the part of most parties involved in this costly affair, there were not considerable political hands played behind the scenes. The US has now become accustomed to Washington politicians behaving badly; it is sad that the virus appears to have infected the workings of the bureaucracy as well.

But now that it is no longer mired in proving that its combination should receive a green light from all the requisite authorities, the real work begins for American and US Airways once they formally close on their merger agreement in Dec-2013. In some ways it is unfortunate that there was a three month delay given the fact the carriers are still touting USD1 billion in annual net synergies beginning in 2015.

It begs the question that if the estimated synergies are the same, why put up such a fight over slots at an airport that while strategic, is not a major international gateway that can feed traffic from oneworld partners?

And the outcome suggests that ultimately DOJ was largely focussed on Washington National, with little consideration over how the merger would affect access to international markets. Additionally, American and US Airways should have realised some concessions were necessary given that a slot-controlled airport was featured in the combined hub portfolio. United-Continental ultimately had to cede slots to Southwest at Newark in order to consummate their tie-up.

Executives at American and US Airways remarked that by reaching a settlement with DOJ they can now start building the best global network. Operating on a truly global scale means understanding the dynamic environment that is the global airline industry – rising pockets of strength in Asia and Latin America and the increasing importance of the three Gulf carriers that were largely dismissed by the global powerhouse carriers just a couple of years ago.

In order to deliver on its promise of network superiority, the new American needs a deep understanding of the direction of the global airline industry.

The combined carrier will now be pressed to execute the key elements of sustained favourable labour relations and what it means to be a truly global carrier in the emerging new world order in the airline industry.

Interestingly in this respect, American seems to have quietly made a statement on the subject by announcing yesterday its agreement to codeshare with Etihad on the Gulf carrier's Abu Dhabi service to Los Angeles when it begins on 14-Jun-2014 - services that Delta meanwhile, enlisting the support of A4A and the ALPA, is loudly denouncing.