Similar to US carriers Delta and US Airways, Southwest Airlines recorded a strong financial performance in 3Q2013, driven partly by its ability to raise fares as well as some relief in unit cost pressure. The carrier remains optimistic about 4Q2013 even as it faces some headwinds stemming from the US Government shutdown and the sliding of busy travel days for the US Thanksgiving holiday from Nov-2013 to Dec-2013.

Southwest reaches a milestone in Nov-2013 when its de-hubbing of Atlanta takes full effect. By Apr-2014 Southwest and AirTran will deploy 160 daily flights from the largest US airport in terms of passenger enplanements. At that time Atlanta will be roughly the same size in terms of departures as Houston Hobby or Phoenix – two of Southwest’s top markets. But it will pale in comparison to Chicago Midway, which currently has roughly 253 daily departures.

Southwest’s management has concluded that Atlanta was a “challenge” for AirTran prior to the carrier's acquisition by Southwest and the de-hubbing should produce improvements in bolstering traffic in the local market from the airport. Carrier executives are also stressing the company’s shrinking footprint in Atlanta should not be interpreted as the airport’s value diminishing in the combined Southwest-AirTran network.

Southwest top airports by departures as of Aug-2013 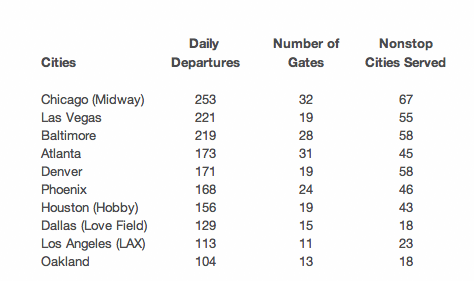 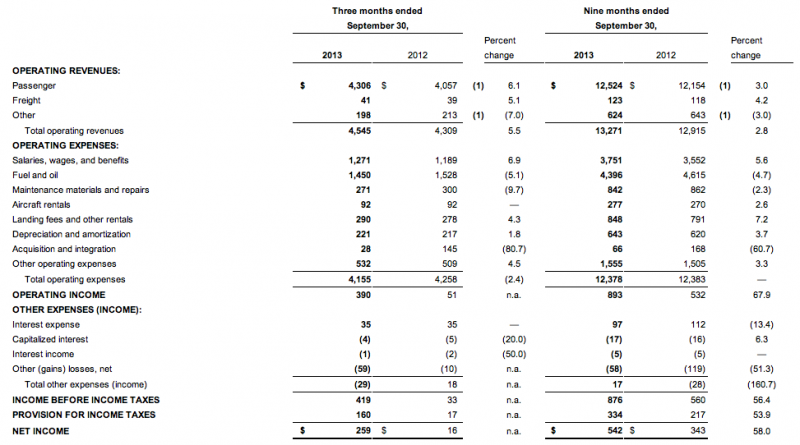 Employee costs rose nearly 7% year-on-year during 3Q2013 to USD1.3 billion, roughly 31% of the carrier’s USD4.2 billion in expenses. Southwest CEO Gary Kelly remarked during a 3Q2013 earnings discussion that the vast majority of the carrier’s contracts with union employees are currently amendable. Mr Kelly stated he felt the carrier was having positive dialogue with those employee groups. But in a now-famous memo to employees issued in Dec-2011 he cautioned that Southwest’s once favourable cost advantage had been cut in half relative to its US legacy peers, which essentially made it difficult to stimulate traffic. 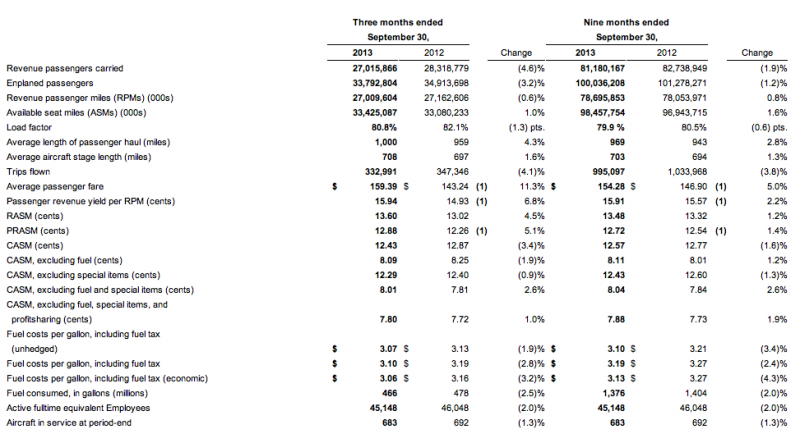 Mr Kelly explained the 11% jump in average fare was a “little misleading” as Southwest’s average length of haul grew 4.3% during 3Q2013, noting one would expect to pay a higher fare to fly further.

Still trumpeting the fact that Southwest is a low-fare carrier, Mr Kelly explained the increases in the carrier’s fares are largely a function of cost pressures, and fuel is the primary source of that pressure. While Southwest’s fuel costs moderated year-on-year during 3Q2013 from USD3.16 per gallon to USD3.06, its CEO concluded that Southwest is still catching up to fuel increases it has endured during the last decade.

Southwest so far during 2013 has purposefully used less sale activity, said Mr Kelly, which is being driven in part by a healthier economy and the continuing transition of AirTran’s markets into the Southwest network.

Carrier CFO Tammy Romo explained that during 3Q2013 roughly 15% of Southwest-AirTran’s network was deployed in new or conversion markets from AirTran. It is likely Southwest has done some revenue optimisation in the AirTran markets that also contributed to an increase in the airline’s average fare.

Southwest’s unit cost excluding fuel, special items and profit sharing increased 1% during 3Q2013 – stemming from higher salaries, airport and revenue related costs. The carrier expects flat unit costs year-on-year during 4Q2013, which should help Southwest deliver on previous projects of a 1% unit cost rise for FY2013. The carrier credited some of its favourable cost performance with its fleet modernisation efforts, which entails the addition of Boeing 737-800s and adding seats to its -700s models.

For the remainder of 4Q2013, Southwest believes unit revenue trends could be choppy as it will record a USD20 million unit revenue hit from the 16-day government shutdown that occurred in Oct-2013. As such, it only expects a 1ppt rise in unit revenues for the month.

Southwest is warning of difficult year-on-year comparisons for Nov-2013 as the busy travel days post Thanksgiving in the US will be in Dec-2013, which of course bodes well for that month. Other US carriers have also made the same comments. Despite the challenge in making year-on-year comparisons in unit revenue performance for Oct-2013 to Dec-2013, Southwest declared it was seeing encouraging booking trends for the holidays.

Southwest pins its hopes on targeting local traffic in Atlanta

Southwest during 4Q2013 is officially unravelling AirTran’s former hub in Atlanta. Previously, Southwest executives have estimated that at the time of the AirTran acquisition, about 60% of AirTran’s customers in Atlanta were connecting, and once the flattening out is complete, that number would fall to 40%.

By smoothing out AirTran’s early morning and late evening banks of flights in Atlanta, Southwest believes it can offer better schedules for local traffic and business travellers, and presumably improve Atlanta’s financial performance. It is a theory that is about to be put to the test.

Now with more of a year of its own operations in Atlanta and the continuing tweaking of AirTran’s service from the airport, it seems as if Southwest and Delta (Atlanta’s largest carrier by a wide margin with an 80% seat share) will likely coexist without inflicting too much damage on one another.

During 2013 Delta has repeatedly cited its largest hub as one of its top performers while previously stating it seemed Southwest during 2012 was having difficulty filling its seats on service from the airport. Delta, meanwhile, seems somewhat unfazed by Southwest’s presence in Atlanta, evidenced by its USD1.2 billion profit in 3Q2012. 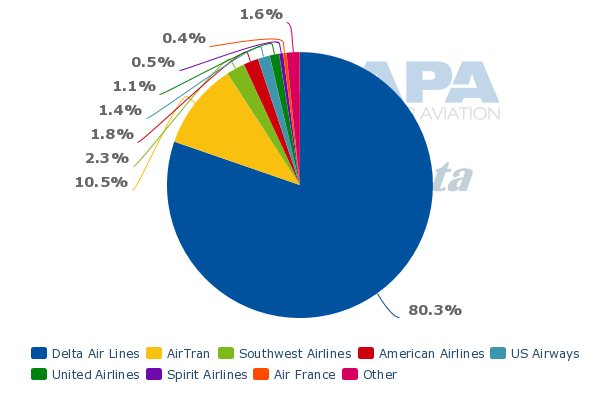 Southwest's sound 3Q2013 performance included a unit cost performance that was more favourable than most of the legacy carriers. Just how long the airline can keep its unit cost growth at 1% on an annual basis largely depends on the outcome of contract talks with its labour groups. The push-and-pull that will ensue is likely to produce concessions on both sides, and Southwest management may either have to alter its expectations on salaries, work rules, or both. Either option would see costs heading in the wrong direction at a time when Southwest is feeling legacy pangs.

Some of Southwest’s proposals have already met strong opposition as the carrier and the Transport Workers Union filed for mediation in 2012 after TWU deemed Southwest was attempting to squeeze frontline employees. That is likely just a small fraction of the resistance Southwest will encounter as it attempts to bolster its cost advantage through collective bargaining and seek to gain concessions from some of the highest paid pilots in the US airline industry.