Southwest Airlines aims to realise its goal of dismantling AirTran’s hub in Atlanta in Nov-2013 as a means to bolster local passengers at the airport in the hopes of improving Atlanta’s performance. The declaration that Atlanta will officially become a point-to-point operation completes efforts by Southwest to eliminate unprofitable flow-through routes and concentrate on areas where it, along with AirTran, has relative strength.

After completing its acquisition of AirTran in May-2011, Southwest set its sights on network optimisation between the two carriers. The exercise essentially resulted in many small markets being eliminated from AirTran’s network and Southwest’s determination that Atlanta would perform more effectively in the combined network through the adoption of Southwest’s point-to-point route management strategy.

A build-up and teardown at Hartsfield-Jackson

Many of those markets are at the top of Southwest’s system in terms of daily departures and seats on offer – Hobby, BWI, Chicago Midway, Denver, Phoenix, Orlando, Los Angeles and Las Vegas. 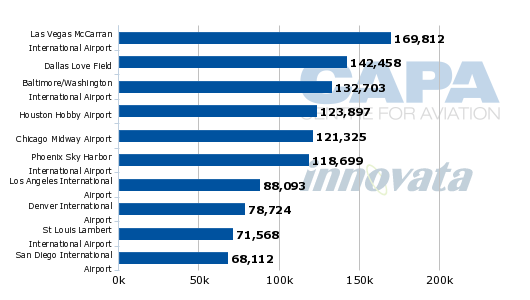 Around the same time Southwest introduced its own service from Atlanta, the carrier also opted to cull small markets that AirTran had used to flow passengers over Atlanta. Service eliminations included Flint, Michigan and Rochester, New York and the larger Charlotte market. The capacity was redeployed to BWI, Chicago Midway, Hobby and Orlando.

Southwest’s route pairings from Atlanta, coupled with AirTran’s network from the airport result in the carriers operating to most of the large metro markets and strategic leisure destinations in Florida and the Caribbean. It is a design implemented by all the US network carriers to centre the majority of flights from their respective hubs, and Southwest-AirTran are now focusing their Atlanta service in pockets where they have strength. 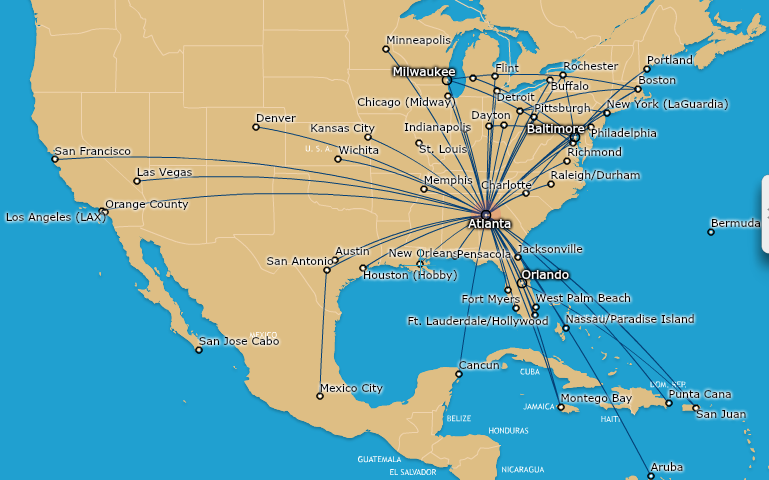 Together the carriers will serve nearly all of the top domestic markets from Atlanta, with the exception of Charlotte. Southwest is culling AirTran’s Charlotte-Atlanta flights during 2Q2013 and launching its own branded service from Charlotte to Hobby, Midway and Orlando. 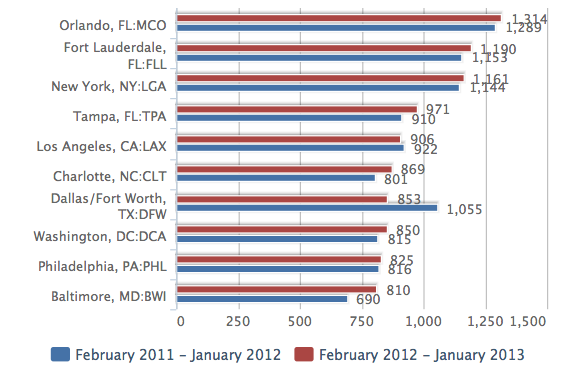 Total passengers carried in Atlanta by carrier (US flights, in millions): 2009 to 2013 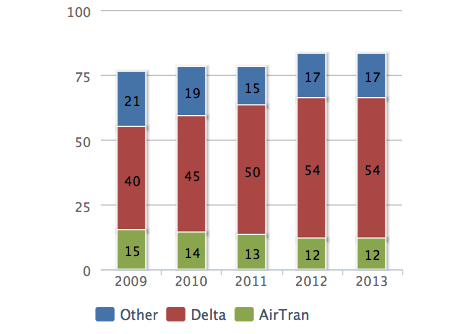 Since it began eliminating smaller markets from Atlanta, Southwest has stressed that its aim was to increase local traffic as a means to improve its fortunes in the market. Outlining the challenges Southwest has faced in Atlanta, Southwest COO and AirTran President Bob Jordan recently stated that presently the hub pattern in Atlanta is comprised an early morning and late evening bank, which is timed poorly for local traffic and business passengers.

During peak times the Atlanta hub for the combined operations handles about 30 aircraft, which will drop to roughly 20 in Nov-2013. “It just lets us put the flights smoothly across the day, really lined up in terms of when our customers want the flights,” said Mr Jordan.

The shift also is indicative of an effort by Southwest to improve aircraft deployment through tighter turn times. The carrier is likely calculating that smoothing out the banks will help it more effectively turn its aircraft.

Building traffic patterns in Atlanta to mirror Midway and BWI

At the time Southwest purchased AirTran about 60% of the carrier’s passengers travelling thorough Atlanta were making connections, and that has dropped to 52% or 53%, said Mr Jordan. He estimates the percentage would ultimately fall in the range of roughly 40%, which is similar to connection patterns at Southwest’s focus cities of Baltimore or Chicago.

Despite all the rhetoric about de-hubbing Atlanta, Southwest CEO Gary Kelly remarked that at some point Atlanta could meld into a “hub like operation” similar to Midway, but at the moment Southwest is not satisfied with the performance of the Atlanta hub. He concludes the move to de-hub Atlanta will net more local traffic than AirTran is currently processing in its largest market, and improve the company’s fortunes in Atlanta.

Data from the US Department of Transportation (DoT) show that Southwest’s load factor during 2012 from Atlanta as an origin airport was about 74% with AirTran recording an 80% load factor. On a consolidated basis, AirTran and Southwest had a system-wide load factor of 77% in 2012.

As Southwest was spooling up its operations in Atlanta during 2012, the dominant carrier in the market, Delta, remarked that Southwest appeared to be encountering difficulty in filling its seats, and opted to take some aggressive fare actions in the market. Delta also welcomed some of Southwest’s capacity rationalisation in Atlanta, noting it would create long term benefits in the market.

Deconstructing a hub is a complex task to accomplish while larger integration issues between Southwest and AirTran are looming, which is in part a driver for the underperformance in Atlanta. At no time in its discourse did Southwest mention its major competitor in Atlanta, which accounts for nearly 81% of the seat share at the airport.

While Southwest is attempting to chart a different course in Atlanta through the transition to point-to-point flights, its success is still not guaranteed as Delta operates to nearly all of the markets the combined Southwest-AirTran network serves from Atlanta. The jury is still out over whether Southwest will effectively spar with the 800lb gorilla.