Southwest cedes some markets to Delta as tweaks in Atlanta continue

Southwest Airlines is ceding some markets from Atlanta to Delta during 2Q2013 as work continues towards fully optimising the combined networks of Southwest and AirTran, the carrier acquired by Southwest in 2011. The cuts reflect Southwest’s desire to transition AirTran’s Atlanta hub from a connection centre to its traditional point-to-point model as smaller markets such as Flint, Michigan and Rochester, New York are pegged for elimination. But Southwest is also cutting Charlotte, one of the top destinations from Atlanta, and redeploying the capacity to its strongholds of Chicago Midway, Houston Hobby and Orlando.

The moves are occurring as Atlanta’s largest carrier, and Southwest-AirTran’s main rival, Delta is declaring that Southwest is facing some challenges in changing the dynamics of AirTran’s operations in Atlanta. Overall Delta believes the capacity changes Southwest is making in Atlanta should create a rational operating environment. But it is not yet certain if Southwest will be successful in spooling up Atlanta to its expectations.

Southwest and AirTran now operate alongside one another in Atlanta after Southwest launched its own branded operations from the busiest airport in the US in Feb-2012. Between mid-Jun-2012 and 29-Oct-2012 Southwest increased its seat share in Atlanta from nearly 2% to 3%.

Southwest now serves three of the top 10 domestic markets from Atlanta based on the number of seats on offer. 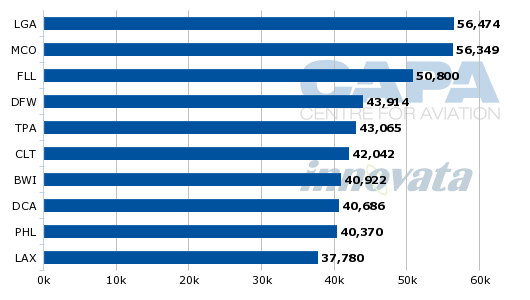 Southwest during Apr/May-2013 will continue its aim of cutting small and unviable markets from AirTran’s network through the elimination of service from Atlanta to Flint and Rochester. Throughout 2012 service operated by AirTran to smaller markets in its network has ceased including Asheville, NC; Newport News, Virginia; Knoxville, Tennessee; Allentown and Harrisburg, Pennsylvania; Bloomington, Illinois; White Plains, New York; Sarasota, Florida; Huntsville, Alabama; Charleston, West Virginia; and Atlantic City, New Jersey. AirTran has also ceased service to Dallas/Fort Worth, Washington Dulles and Miami.

Delta is the dominant carrier at Flint in terms of seats on offer, accounting for a 50% share, followed by AirTran’s share of 31%. Atlanta is the top destination from the airport, and presently Delta holds a 56% share of the seating capacity between Atlanta and Flint while AirTran holds the remaining 44%.

Once AirTran exits the market, Delta will hold a monopoly on the route, which could drive up fares between the two cities. Delta is also the sole operator on service between Flint and its hubs in Minneapolis and Detroit, so prices between Atlanta and Flint will likely mirror current fares on those existing monopoly routes. 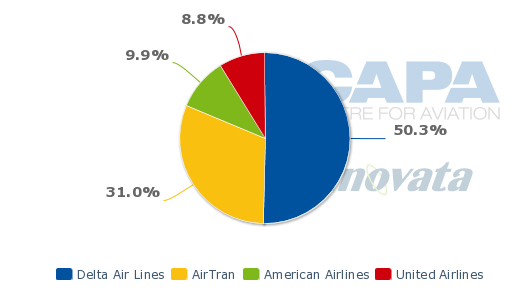 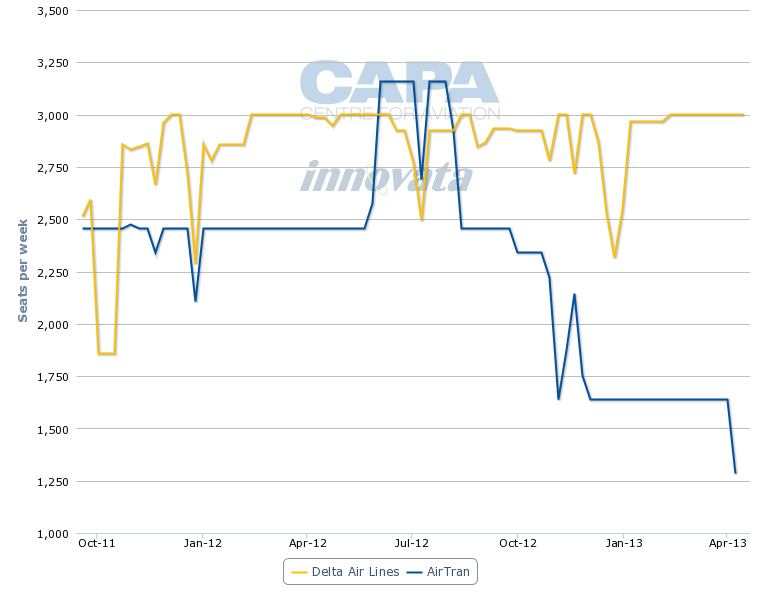 Southwest is swapping AirTran’s Flint-Atlanta service for new flights to Baltimore-Washington International Airport (BWI), which will become a new destination for Flint, located 106km northwest of Detroit. The shift to BWI allows Southwest to move Atlanta flights to its own positions of strength, as BWI is Southwest’s fourth largest airport in terms of daily departures.

Southwest during the last few months has been rejigging its capacity at BWI through the elimination of service from BWI to New York’s major airports. That capacity has been shifted to New York-Nashville to improve capturing east-west traffic flows to New York.

Once Southwest ends AirTran’s Flint-Atlanta service, Southwest will serve BWI, and Orlando Tampa from Flint, holding its own monopoly positions in those destinations. All three markets are in either Southwest or AirTran’s top 10 airports served, which is consistent with Southwest’s moves to deploy AirTran’s capacity from smaller markets to destinations where the carriers have positions of strength. 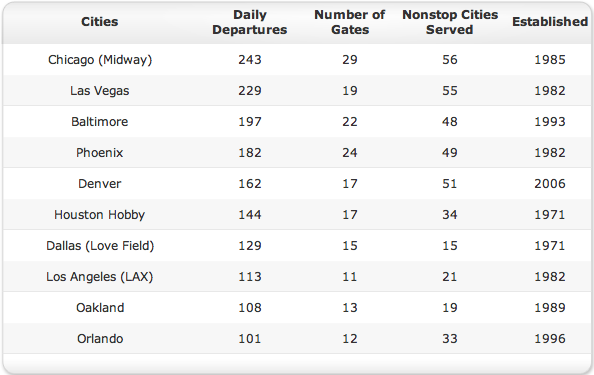 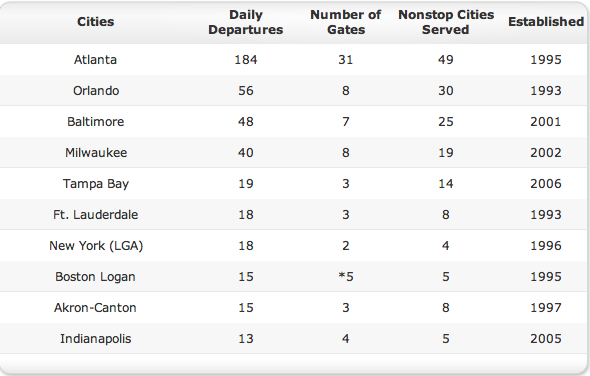 Unlike Flint, AirTran has more limited scale in Rochester, where the market is more fragmented. Delta and United are the leading carriers, holding 23% and 22% shares of current capacity, respectively. AirTran is a close third, accounting for a 19% share.

Delta holds a commanding lead on the Rochester-Atlanta pairing, holding a 69% seat share compared with 31% share for AirTran. 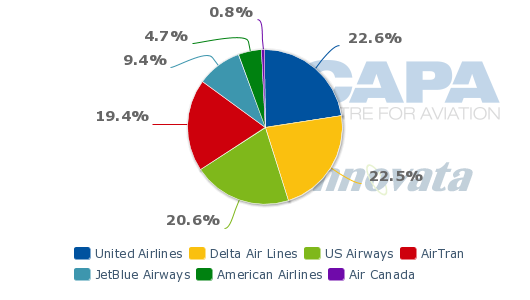 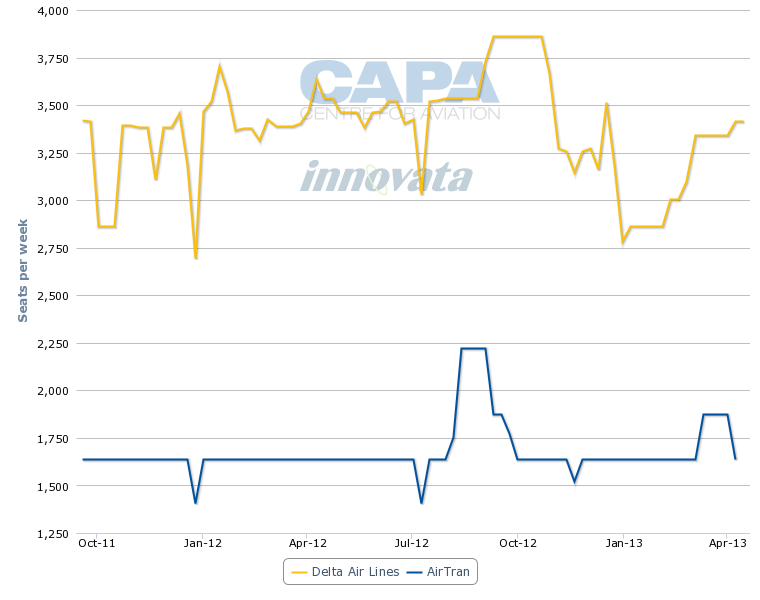 Southwest is redeploying the Rochester-Atlanta flight to Chicago Midway, its top market with respect to daily departures. Southwest plans to replace AirTran’s Rochester-BWI and Orlando Tampa services with it owns branded flights in 2013, which again will see the carrier serve its top destinations from the airport located in western New York state.

Both American and United serve Chicago O’Hare from Rochester, and combined they currently offer roughly 4,300 one-way seats in the market, with United holding a 69% share and American accounting for the remaining 31%. United and American are the dominant carriers at O’Hare, accounting for respective seat shares of 48% and 36% while Southwest commands an 89% seat share at Midway.

Southwest has likely concluded it has a greater ability to make the Chicago market more viable from Rochester even though it has more competitors than Rochester-Atlanta, reasoning that its scale in Midway should give it more leverage to compete than trying to manage connections through Atlanta to make the Rochester market successful. Roughly 60% of AirTran’s Atlanta passengers were travelling on connecting flights at the time it was acquired by Southwest.

AirTran to be rebranded as Southwest in Charlotte

Southwest will also take its own brand into US Airways’ Charlotte fortress in the Apr/May-2013 timeframe. Charlotte is US Airways’ top hub for both seat and ASK deployment, and the carrier holds a 89% seat share at the airport.

Southwest has opted to cut AirTran’s service from Atlanta to Charlotte, which is the sixth largest market served from Atlanta based on seats. It is also a well-served market, with both Delta and US Airways operating service alongside AirTran. But AirTran is the smallest carrier in the market in terms of seats on offer, accounting for just a 13% share of the seats compared with 49% held by Delta and US Airways’ share of 39%. 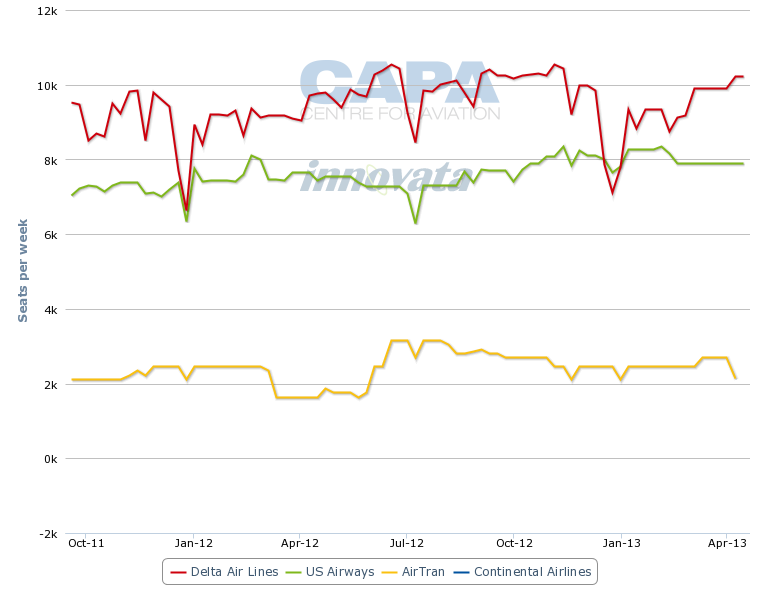 The Charlotte-Atlanta service operated by AirTran will be replaced with a Southwest-operated service to Chicago Midway, Houston Hobby and Orlando. US Airways operates service to Orlando from Charlotte, while US Airways and United offer flights to Houston Intercontinental, which is the major airport serving the Houston metropolitan area. Southwest is also taking over AirTran’s existing service between BWI and Charlotte, which is also served by US Airways.

The Chicago-Charlotte market already has a fair amount of service through flights operated to O’Hare by US Airways, United and American Airlines. Combined those airlines offer approximately 13,700 seats in the market, with US Airways having a 68% lead share followed by United’s 20% share and American’s 12% seat share. It seems that Southwest is applying the same logic in launching flights from Charlotte to Midway as Rochester to Midway – even though the market is more crowded, its stature in Midway should create an opportunity to generate a higher amount of revenue. 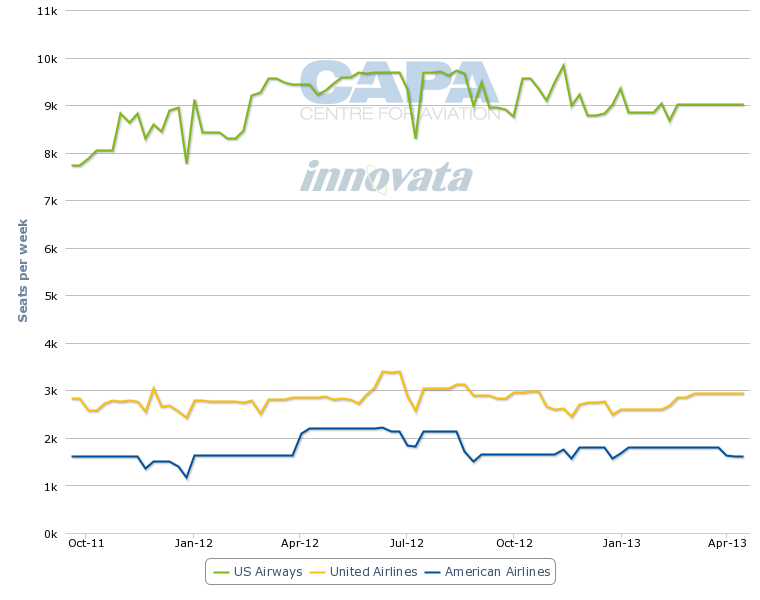 Southwest’s decision to transfer AirTran’s service in Charlotte to its own branded flights is no surprise given that Southwest has more competitive overlap with US Airways than any other major carrier. US Airways appears unfazed by the move. US Airways president Scott Kirby noted that essentially Southwest was just switching AirTran’s service, “so I don’t think that changes anything at all”.

With so much attention placed on Atlanta by Southwest at the time it acquired AirTran, it is somewhat curious that Southwest is retaining service in Charlotte, which is 394km from Atlanta, and is a much smaller hub. But Charlotte’s passenger numbers have grown steadily throughout 2012, and Southwest is somewhat better positioned to compete with a well-known competitor in a smaller hub while it unwinds AirTran’s connecting network in Atlanta.

Other cuts Southwest plans to implement during 2Q2013 to its network include its own branded service from Boise, Idaho to Portland, Oregon; flights from Burbank, California to Denver, Colorado; and service from Houston, Texas to Philadelphia, Pennsylvania. Alaska is Southwest’s competitor in the Boise-Portland market while United operates service between Burbank and Denver. United and US Airways operate service from Philadelphia to Houston Intercontinental.

Southwest is ceding the Burbank-Denver market to United. Presently Southwest commands a 64% seat share compared with United’s 36% share. The opposite is occurring in Boise-Portland, where Alaska holds a 60% seat share versus a 40% share for Southwest. US Airways and United have a greater presence than Southwest in the Houston-Philadelphia market, offering roughly 6,900 combined weekly seats in the market compared with Southwest’s offering of just under 1,000.

Southwest maintained those cuts were paying for additions elsewhere in its network, including the new service replacing some flights being eliminated from Atlanta.

Southwest’s entry into Atlanta triggered significant speculation about how Delta would respond to competition from the USA’s most high profile low-fare carrier. But Delta seems to have benefitted from the continuing dissection that Southwest is performing of AirTran’s network in Atlanta.

Delta EVP network planning, revenue management and marketing, Glen Hauenstein, recently remarked that AirTran’s capacity in Atlanta is about 50% below its peak after the carrier was acquired by Southwest. He commented that Southwest could be encountering some difficulty in shifting AirTran’s operations in Atlanta, noting that data from the US Department of Transportation show that Southwest has had “trouble filling their seats, so they put some very aggressive sale fares out there”.

While Mr Hauenstein believes those pricing actions will mitigate over time and that the capacity rationlisation Southwest is introducing in Atlanta will create long-term benefits, Southwest could be overestimating the ease in which it can essentially de-hub Atlanta. Its latest moves indicate it is cutting AirTran’s marginally performing flights from Atlanta in favour of linking Atlanta to traditional Southwest strongholds to shore-up loads and revenue. But the transition Southwest aims to complete in Atlanta will take a significant amount of time and effort, and in the meantime Delta will continue to leverage its scale in Atlanta and continue to compete fiercely.