United Airlines’ top-line 3Q2013 profit was undermined by weaker unit revenue and yield performance relative to its US legacy peers, a problem that has plagued the carrier for the past year.

The weaker performance is the latest in a string of quarterly results in which the carrier has declared disappointment and pledged that its fortunes will improve. Specific to 3Q2013, the culprits ticked off by the airline included incorrect demand forecast projections, continued pressure in the trans-Pacific and some suboptimisation of its fleet.

To say United has endured a rough couple of years is an understatement. But what the industry and its investors are looking for now is a meaningful improvement in its results that so far has yet to materialise. Three years after the merger’s close the company is still struggling with revenue and cost management – basic tenets of the business that continue to suffer.

Including special charges United recorded a USD379 million net profit for 3Q2013, a marked improvement over the USD6 million net income recorded the year prior. The carrier’s revenues rose by 3% to USD10.2 billion while top-line operating expenses were essentially flat year-on-year at USD9.7 billion. That lifted United’s operating income from USD200 million recorded in 3Q2012 to USD508 million in 3Q2013. 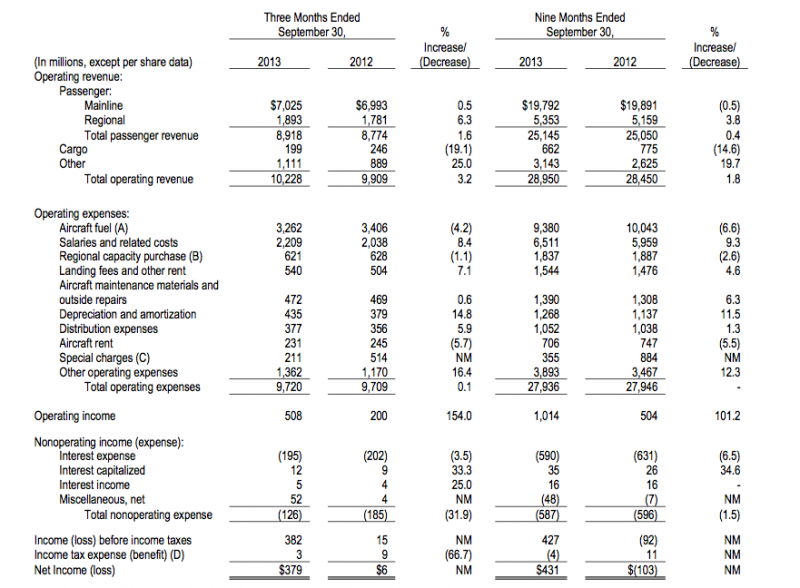 But the carrier’s 2.7% increase in consolidated passenger unit revenues and 1.9% rise in yields year-on-year during 3Q2013 were paltry compared to United’s fellow legacy carriers American, Delta and United, who all recorded unit revenue growth above 3% in 3Q2013.

United chief revenue officer Jim Compton supplied a somewhat detailed explanation of the airline’s demand forecast miscues in 3Q2013, explaining the forecasting biased the carrier’s revenue management system to open lower-yield inventory buckets further out in the booking curve. “As a result, while we ran very high load factors this quarter, our yield mix was lower than it should have been,” he stated.

During mid-Sep-2013 when leisure demand began to soften and close-in booking demand picked up, the effects from the incorrect forecasting intensified, said Mr Compton. The fix being initiated by United entails two recalibrations to its demand forecast. Mr Compton said the first adjustment would reflect booking curves toward close-in bookings (which are more lucrative).

The second adjustment occurs in Nov-2013, and entails updating demand forecasts to account for recent trends. But Mr Compton cautioned that it would take some time to see the benefits of the recalibration. However, he does believe some yield improvement should occur during 1H2014.

During 2Q2013 United attributed some of the weakness of its trans-Pacific performance to the weakness of the yen, which is still persisting as the carrier estimates that it encountered a USD55 million headwind in 3Q2013 due to weakness in the Japanese currency.

But in 3Q2013 United faced additional capacity on routes to China from domestic and foreign competitors as Mr Compton estimated that competitive capacity from the US to Beijing and Shanghai grew 20% year-on-year.

United’s Star alliance partner Air China has bolstered its service from Los Angeles and New York in addition to launching new service from Houston to Beijing in Jul-2013. Delta in its build-up of Seattle as a trans-Pacific gateway launched service to Shanghai in Jun-2013 while Hainan introduced service from Chicago O’Hare to Beijing in Sep-2013 in direct competition with United, American and Air China.

Mr Compton remarked that yields and load factor on United’s flights to China further deteriorated in Sep-2013 “over and above what we originally anticipated”.

United’s trans-Pacific strategy going forward appears to be resting on deployment of its Boeing 787 aircraft into some secondary Chinese markets, evidenced by its recent announcement of new service from its San Francisco hub to Chengdu beginning in Jun-2014. The carrier recently told Forbes magazine that China is full of cities with a population range of six to 10 million, and the 787 will allow it to be a first mover. It seems like a logical assessment once the highly publicised teething pains on the 787 are resolved.

But in the meantime the pressure on United’s existing routes to China will continue, and the carrier needs to find ways to combat good, old-fashioned competition.

No relief in unit revenue pressure is evident in 4Q2013 guidance

While United’s executives expect to regain yield traction during 1H2014, and estimate USD40 million in benefits from placing 747s in other hubs after corralling them in San Francisco during 2012 for maintenance, in the short term unit revenue pressure is continuing.

United’s consolidated unit costs (excluding fuel, special items and third party business expense) are forecast to rise 1% during 4Q2013 after increasing 6.5% in 3Q2013. For FY2013 the expected increase is 6% to 6.5%. Similar to Delta, United CFO John Rainey stated that for the foreseeable future United is targeting increases in non-fuel unit costs that are lower than the inflation rate.

Every earnings discussion held by United executives during the past year has been peppered with remarks regarding the carrier’s unsatisfactory performance – largely in operations, unit revenue weakness relative to the industry and unit cost creep. Alongside that commentary has been constant pledges that the carrier is working on all fronts to deliver improved results. While it has conquered its operational challenges, United’s performance in the key metrics of unit revenue and unit costs relative to its peers continue to suffer. Acknowledging the problems is admirable, but it is time for United to start delivering results that match the potential of the competitive global network it so often touts.