Allegiant and AirTran up 4%, other North and South American LCCs gain 2%

North and South American low cost carrier stocks gained yesterday boosted by gains in the wider market. The Dow (+1.4%) rose on a boost in the technology sector, particular gains from IBM. The AMEX Airline Index ended trading up 3.6%.

The association also estimated fuel costs for the period would rise 20% to USD2.19 per gallon. Oil prices declined 1.0% to USD75.58 on Wednesday, sending stocks higher.

In other LCC news from the Americas, Spirit Airlines pilots, represented by the Air Line Pilots Association (ALPA), announced (12-May-2010) they had received confirmation of the 30-day cooling-off period from the National Mediation Board (NMB) an had up until 12-Jun-2010 to reach an agreement on a new pilot contract. After that time, pilots may call a lawful strike. Spirit pilots have been in negotiations with management for more than three years. In Feb-2010, the pilots applied to the NMB for a proffer of arbitration. On 03-May-2010, the NMB proffered binding arbitration to both sides, which the pilots refused two days later. This refusal allowed the NMB to call for a 30-day cooling-off period.

On its network, Spirit Airlines confirmed reports it will discontinue its Fort Lauderdale-Freeport service on 30-May-2010 due to a lack of customer demand for the route.

Meanwhile, the carrier would “love” to launch services to Havana in Cuba, according to CEO and President, Ben Baldanza in Travel Weekly (10-May-2010), but “who knows when”. It has been unable to generate a profit in that market under the “current convoluted charter system they've set up”.

Peanuts Daily features all the latest global low cost carrier traffic, financial and strategic reports in an easy to digest Daily helping. Subscribe today for the latest updates on both listed and non-listed LCCs worldwide! 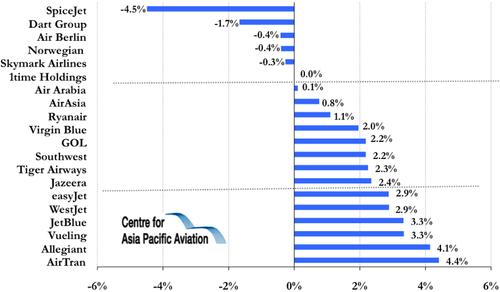