US carriers Alaska Airlines and Frontier appear to be satisfied with test routes they have launched from San Diego and Trenton, New Jersey during 4Q2012 as both airlines plan to make a push during 1Q2013 from each airport. Alaska is introducing its second transcontinental flight from San Diego to Boston in Mar-2013 followed by new Hawaii service in 2Q2013. Frontier, meanwhile, is making a push from Trenton to Florida during the northern hemisphere winter.

Frontier launched service from Trenton to Orlando in Nov-2012, and now is the lone commercial carrier serving the small airport close to the larger metro areas of Philadelphia and New York.

Alaska debuted its first transcontinental service from San Diego to the leisure destination of Orlando in Oct-2012. Both carriers characterised those forays as test cases in route expansion outside their core networks which are built around Seattle and Portland for Alaska and Denver for Frontier.

The moves are also part of each carrier’s strategy to move into markets more shielded from competition, as Frontier continues to look for strategic small market opportunities outside of Denver, and Alaska aims to diversify some of its business from the US west coast as competition intensifies in that region. Although it is still early days for the service launched from San Diego and Trenton during the final three months of 2012, both carriers appear to have reached an internal level of satisfaction that supports expansion from each airport.

Alaska’s latest moves in San Diego have fuelled speculation that the carrier is laying the groundwork to possibly create a hub in southern California joining its existing hubs of Portland and Seattle located in the Pacific northwest. 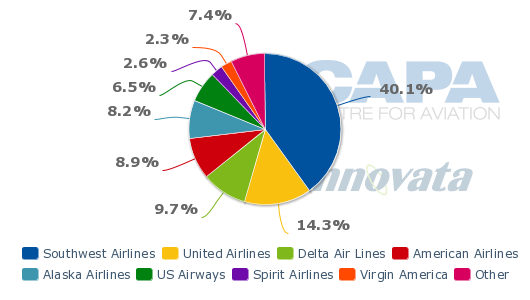 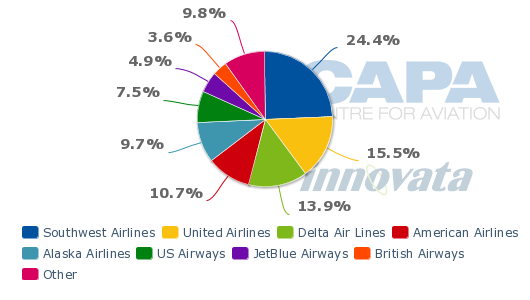 Alaska operates from San Diego to some nine markets, which means the carrier would need to invest much time and energy into building up San Diego into a legitimate hub. But with the addition of a second transcontinental market from San Diego, Alaska has concluded there are some pockets from the airport where it could operate successfully without touching one of its core hubs.

Recently Alaska VP of planning and revenue management Andrew Harrison described the San Diego-Orlando pairing as a test market with no head-to-head competition. He acknowledged it was outside Alaska’s core transcontinental network, which includes long-haul service across the US primarily from its Portland and Seattle hubs, along with flights from Los Angeles. He also concluded the Orlando market is somewhat of a low-yielding route, but given its long-haul nature, it does boost Alaska’s aircraft utilisation. Mr Harrison explained Alaska’s marketing department would be working hard to promote the pairing since it is outside the territory where Alaska is better known.

Alaska seems willing to take another gamble from San Diego with the launch of service to Boston on 29-Mar-2013. Unlike the situation at Orlando, Alaska faces competition from JetBlue in the market. Boston serves as a major focus city for JetBlue, representing its second largest base after its JFK headquarters in terms of seat and ASK deployment.

Based on schedules in Innovata, during Mar-2013 when Alaska starts its seven weekly services in the market, it could introduce up to 1,120 seats on the San Diego-Boston pairing. Alaska operates two configurations of its Boeing 737-800s, one featuring 160 seats and another configured with 156 seats. If Alaska opts to use its larger 737s on the service it will account for 51% of the roughly 2,170 seats on offer, with JetBlue representing the remaining 49%. 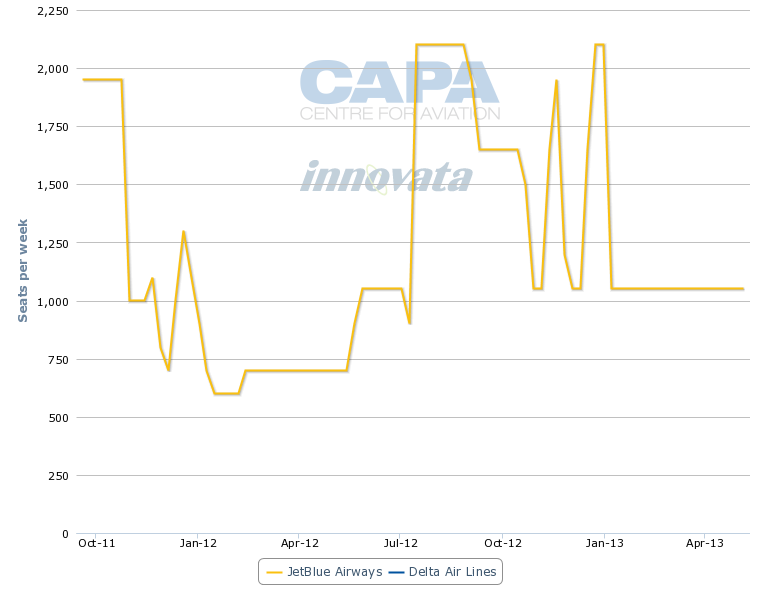 JetBlue and Alaska are already competitors on another transcontinental market from the US west coast – from Alaska’s Seattle hub to Boston. The two carriers have a similar capacity split on that market as JetBlue accounts for 49% of the roughly 2,149 weekly seats on offer while Alaska holds a 51% share. 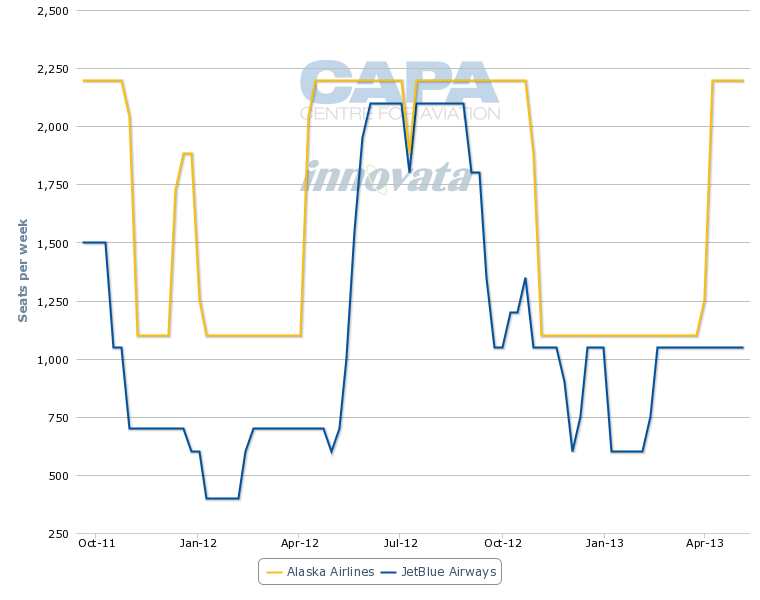 Alaska and JetBlue have been competitors on the Boston-Seattle pairing for nearly eight years. JetBlue launched service in 2005, three years after the debut of Alaska’s flights. Both carriers operate under a hybrid business model in the sense of offering lower fares with medium frills and some upsell for products passengers have said they are willing to pay for.

The rational competition that has endured from Seattle to Boston should transfer into the San Diego-Boston market, as both carriers have been able to coexist in a market where Alaska has its major hub one end and JetBlue has a major focus city on the other. JetBlue’s outbound flights from Seattle and San Diego are also red eye services, which could give Alaska a slight advantage among customer looking for more favourable schedules.

Alaska’s strategy in its recent expansion from San Diego is a way to diversify from some of its more contested markets on the US west coast. During the last year the carrier has experienced intensifying competition at its Portland hub from Spirit Airlines and Virgin America. Spirit has upped competition with Alaska in Portland, launching service to Las Vegas (also served by Southwest). Virgin America has introduced flights in the busy Portland-Los Angeles/San Francisco markets that are also served by United.

During a 3Q2012 earnings discussion Mr Harrison also remarked that Alaska’s network from San Francisco is “completely covered now by Virgin [America]”. The carrier competes with Virgin America and United in all the markets it serves from San Francisco – Palm Springs, Portland, Puerto Vallarta and Seattle.

However, Mr Harrison concluded that capacity rationalisation is occurring on some of its feeder markets (largely operated by Alaska affiliate Horizon Air) in the Pacific northwest, which is creating an overall neutral environment with respect to competitive capacity.

Alaska’s competitive situation in San Diego is much different. Of the nine markets it serves from San Diego it only faces direct competition on three of route pairings – Spirit on service to Portland and Los Cabos, and Hawaiian on flights to Honolulu. Alaska is uncontested in its remaining markets from San Diego – Fresno, Maui, Monterrey, Puerto Vallarta and Orlando.

Diversifying away from its more contested markets could be an effective way for Alaska to accommodate its planned 7%-8% capacity growth for 2013 without having to engage in pricing wars with competitors in already-crowded markets. But the carrier will need to ensure its loads are robust in the lower-yielding San Diego-Orlando market. Boston has somewhat of a higher mix of business travellers, so Alaska could find pricing traction easier when it introduces its new service during 1Q2013.

Alaska is also continuing its push from the US west coast to Hawaii through the Jun-2013 launch of service from San Diego to Lihue on the island of Kauai. The carrier is introducing the new flights despite acknowledging some softness during 3Q2012 triggered by a 15% rise in overall industry capacity from southern California to Hawaii and a 25% expansion of supply from the San Francisco bay area to Hawaii. At the moment no other carrier offers flights from San Diego to Lihue, which should allow Alaska to leverage its existing presence in the San Diego-Hawaii market to build up the new service to Lihue.

See related article: Hawaiian's revenues come under pressure from every region across its network

As Alaska works to dodge competition on its flights on the US west coast, Frontier has opted to bolster service from Trenton, New Jersey, an airport it began serving in Nov-2012 with service to Orlando, Florida. Frontier is now the only carrier offering scheduled service from the airport after small carrier Streamline Airways ceased service from Trenton to Bedford, Massachusetts in Sep-2012 due to the market’s unprofitability.

Frontier, through its service to Orlando, aimed to target passengers that presently drive the 57km to Philadelphia (a hub for US Airways) or 70km to Newark (United’s hub) by offering lower fares than those charged by the major carriers from their respective hub cities.

Similar to Alaska’s new service from San Diego to Orlando, Frontier has had virtually no time to prove out its theory on service to Orlando, but feels reasonably confident enough to extend its test of Trenton’s viability. Beginning in Feb-2013 Frontier is expanding service from Trenton with the introduction of new flights to Fort Lauderdale, Fort Myers and Tampa, Florida and New Orleans, Louisiana. The carrier is also bolstering its twice-weekly service to Orlando to four offerings per week.

Frontier throughout 2012 has been bolstering Denver and other less competitive regions outside Denver after winding down hubs in Milwaukee and Kansas City as part of a network overhaul designed to improve profitability. The carrier has also made a point-to-point push from Colorado Springs and now serves San Diego, Los Angeles, Phoenix and Denver from the airport as part of a test of launching nonstop service from smaller focus cities.

Trenton has become another test case for Frontier, and with the carrier’s relatively modest capacity levels in its new markets, it could attract just enough customers to sustain its service without cannibilising passengers from US Airways, United, JetBlue or Southwest. Its three weekly flights from Trenton to Fort Lauderdale and Tampa flown with 138-seat Airbus A319s account for about 414 seats in each market while the two weekly flights with the same aircraft to Fort Myers and New Orleans represent roughly 276 weekly seats.

It appears Frontier is not willing to devote a huge amount of time to its small focus cities if profitability is not achieved quickly. The carrier is ending service from Allentown, Pennsylvania, to Orlando in Apr-2012 roughly 11 months after its launch. Frontier looked to fill a hole created by AirTran’s cutting of the service, and competed with Allegiant Air in the market, which offers service to Allentown from Orlando Sanford Airport. Frontier cited the costs of operating at Lehigh Valley International as the reason for the route suspension, which indicates the carrier will quickly exit markets if the airports where it is testing its small city concept prove to be too costly.

Alaska and Frontier each attracted to lower hanging fruit

Both Alaska and Frontier with their smaller size relative to their legacy peers – Alaska operates roughly 124 aircraft at the mainline and Frontier operates 56 Airbus narrowbodies – have an ability to move nimbly into markets that are unattractive to larger carriers.

The mergers of Delta-Northwest, United-Continental and AirTran-Southwest have created some low-hanging fruit that smaller carriers are attempting to grab in their efforts to diversify and shield themselves from competition.

Alaska and Frontier are each showing a readiness to experiment in these smaller niche markets, equally being ready to exit quickly to cut losses if the markets fail to live up to their expectations.