Aircraft leasing in India: opportunity knocks for an Indian lessor

There are 652 commercial aircraft with operators in India at 17-Oct-2018 (including 34 in storage), according to the CAPA Fleet Database. Of these, 531 aircraft are leased, which is 81% of the total. This compares with a leased aircraft share of 52% in Asia overall and 53% globally. Indian airlines' leasing dependency reflects their relative youth and/or financial fragility.

However, there are no indigenous Indian lessors and many of the world's biggest aircraft leasing companies have only small fleets with the country's airlines. Available data on aircraft orders for Indian operators show that only a very small percentage are currently through lessors. Nevertheless, leasing looks likely to continue to dominate aircraft financing in India and this share of orders will rise, for example through sale and leaseback.

CAPA India published a report in Sep-2018 examining the prospects for an Indian Aircraft Leasing Sector, noting Indian government initiatives to explore ways to stimulate the creation of resident aircraft leasing in the country. Building on that report, this report provides data from the CAPA Fleet Database to put some parameters around the scale of the opportunity for lessors in India, whether home-grown or offshore.

The issue of leasing and the large amount of aircraft on order for this region will form an important part of the outlook agenda at CAPA's Asia Aviation Summit in Singapore's Capella on 8/9 Nov-2018.
The CAPA Awards for Excellence will be held on the evening of 8-Nov-2018

81% of commercial aircraft in India are leased… 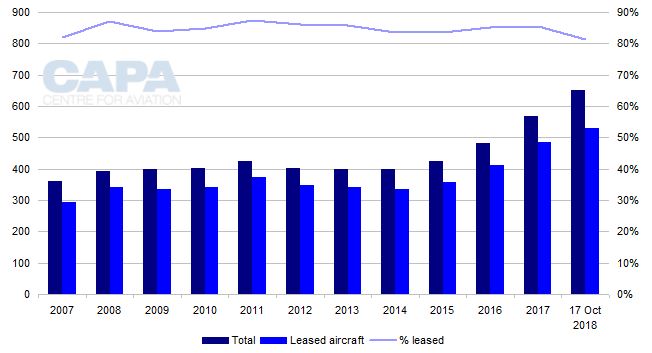 By comparison with other parts of the world, Indian operators rely much more heavily on leased aircraft. In Asia as a whole, leased aircraft account for 52% of all aircraft in service and in storage. Globally, the share is 53%.

Many of India's largest airlines are either relatively new, or have fragile financial positions, or both. This means that they typically have limited financial capacity to own aircraft themselves and so have developed a strong dependency on leasing. 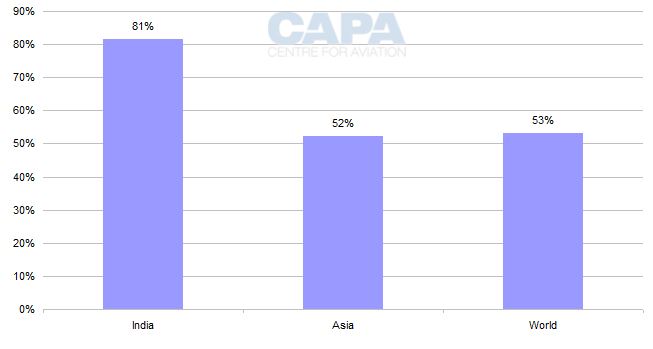 The ranking of Indian airlines by the number of leased aircraft reflects their ranking by total fleet numbers, with each having a high proportion of leasing.

There are 16 Indian operators of leased commercial aircraft at 17-Oct-2018, according to the CAPA Fleet Database.

No lessors based in India, and several leading lessors only have a small presence

In spite of the high demand for leased aircraft in India, there are no lessors based in India (i.e. no leased aircraft with an owner registered in India). Moreover, India has been more or less overlooked by a number of the world's leading lessors.

According to the CAPA Fleet Database, Avolon, GECAS, BBAM, BOC Aviation and Dubai Aerospace Enterprise Capital are the biggest lessors to airlines in India (ranked by leased aircraft numbers under management).

These are among the world's leading lessors, but other leaders of the aircraft leasing sector have a low profile in India.

The leading lessors in India are shown in the chart below. In total, there are 72 lessors managing aircraft that are operated by airlines based in India. The top 20 manage 374 aircraft (70% of the leased total in India), while the remaining 52 lessors manage 157 aircraft (30%)

Indian operators have outstanding orders for a total of 958 new aircraft at 17-Oct-2018, led by IndiGo's 415 orders, according to the CAPA Fleet Database.

However, only 16 of these orders (less than 2%) have been placed by lessors; a very small number, given the large installed base of leased aircraft in the country.

Of course, this figure does not tell the full story, since it is very common for lessors to place orders without disclosing the intended operator.

Typically, this is either because no operator has yet been identified (the order could be thought of as speculative), or because the lessor and/or operator do not yet wish to reveal the operator's identity for commercial reasons. A related point is that orders placed by operators often end up as lessor-owned following sale and leaseback transactions.

Just over a quarter (26%) of global commercial aircraft orders are with lessors, compared with lessors' 53% share of all current aircraft (in service and inactive).

Nevertheless, the figure of less than 2% for lessors as a proportion of all orders for Indian operators is low compared with a figure of 5% for Asia as a whole.

All four are currently among the top 10 lessors in India.

Aircraft orders by lessors for operators in India: 17-Oct-2018

A Sep-2018 report by CAPA India noted that the country's commercial fleet was expected to exceed 5,000 aircraft by 2050. Leased aircraft have dominated Indian airline fleets for some time and this is set to remain the case until airlines build their financial capacity and creditworthiness.

However, rather than continue India's heavy dependence on lessors from overseas, the Indian government is keen to consider how it can facilitate the creation of an indigenous aircraft leasing sector, consisting of lessors resident in the country.

CAPA India's report examined a number of structural obstacles that explain India's lack of a home-grown leasing sector and the issues that would need to be addressed in order to stimulate such a sector.

This analysis highlights the scale of the opportunity that is waiting to be seized by future Indian lessors (or those from elsewhere).